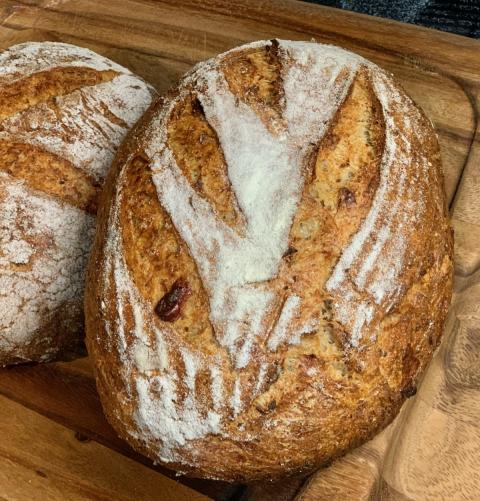 It has been a while since I baked a porridge bread.  I am a big fan of the moist and flavorful crumb I get.  I added some onions directly into the porridge which helps impart a mild onion flavor.  I used some freshly milled whole wheat and rye along with KAF bread flour.

The cheese was a shredded sharp cheddar I picked up during my last visit to Vermont.  I think it would have been better if I added the cheese as cubes since the shredded melded into the bread more than I would have liked.  You can still see some of it melted on the top of the loaf but not enough in my opinion inside the crumb.

I used some mashed Yukon golds which had been baked and roughly mashed with the skins on.  I prefer to leave the skins on for some added flavor.

Overall, I was happy with the way this one turned out.  It was very flavorful and worth baking again.

Mix all the levain ingredients together  for about 1 minute and cover with plastic wrap.  Let it sit at room temperature for around 7-8 hours or until the starter has doubled.  I used my proofer set at 83 degrees and it took about 4 hours.   You can use it immediately in the final dough or let it sit in your refrigerator overnight.

Add about 3/4's of the cream called for in the porridge to the dry ingredients in a small pot set to low and stir constantly until all the liquid is absorbed.  Add the remainder of the cream and keep stirring until you have a nice creamy and soft porridge.  Remove from the heat and let it come to room temperature before adding to the dough.  I put mine in the refrigerator and let it cool quicker.

Mix the flours  and the water for about 1 minute.  Let the rough dough sit for about 20 minutes to an hour.  Next add the levain, cooled porridge, potaotes, olive oil and salt and mix on low for 4minutes.  (Note: with my new Ankarsrum I mixed for about 10 minutes).  Remove the dough from your bowl and place it in a lightly oiled bowl or work surface and do several stretch and folds.  Let it rest covered for 10-15 minutes and then do another stretch and fold.  Let it rest another 10-15 minutes and do one additional stretch and fold.  After a total of 2 hours place your covered bowl in the refrigerator and let it rest for 12 to 24 hours.  (Since I used my proofer I only let the dough sit out for 1.5 hours before refrigerating).

When you are ready to bake remove the bowl from the refrigerator and let it set out at room temperature still covered for 1.5 to 2 hours.  Remove the dough and shape as desired.

The dough will take 1.5 to 2 hours depending on your room temperature and will only rise about 1/3 it's size at most.  Let the dough dictate when it is read to bake not the clock.

Around 45 minutes before ready to bake, pre-heat your oven to 545 degrees F. and prepare it for steam.  I have a heavy-duty baking pan on the bottom rack of my oven with 1 baking stone on above the pan and one on the top shelf.  I pour 1 cup of boiling water in the pan right after I place the dough in the oven.

Right before you are ready to put them in the oven, score as desired and then add 1 cup of boiling water to your steam pan or follow your own steam procedure.

Lower the temperature to 450 degrees.  Bake for 35-50 minutes until the crust is nice and brown and the internal temperature of the bread is 205 degrees.

Take the bread out of the oven when done and let it cool on a bakers rack before for at least 2 hours before eating.

Delicious loaves Ian.  I always appreciate the effort you put into sharing such detailed recipes with everyone here, thanks for always doing that.

It is my pleasure. Glad you liked the bake.