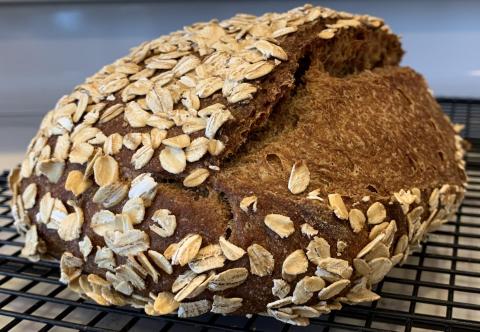 Round 2 for this recipe, and I'm much happier with the result!  Main difference...  Going back to the KAF WW.  Very easy to handle at 81% hydration.

I used a very small biga this time with no noticeable difference in fermentation time.  Made it 13 hours before final mix and it had doubled in volume in that time.  For my schedule, the slow overnight ferments work well.  Trying to get it down to an 8-10 hour Bulk Ferment so I can have the bake wrapped up and done before noon.  Will either increase the biga or increase the bulk ferment temperature next time.  Leaning towards increasing biga...  I forgot the honey during final mix.  Not sure if that would have boosted fermentation, but having a little bit of simple sugars for the yeast couldn't have hurt.

Dough handled easily and held its shape decently between bowl stretch and folds.  Might even be able to go a tad higher on hydration, but not sure it's necessary.  Getting oats on dough was easy with a little water misted on prior to rolling.

I don't have a Dutch Oven, but came up with a working alternative.  A large turkey roaster.  Big enough to put a 9"x5" bread pan with towels in it for steam.

Don't ask me why I scored the dough so low on the side.  I did it, and then asked myself WTF...  Add it to the list of newbie mistakes.  Would like to say it won't happen again, but my track record isn't the greatest.  :-)     On the plus side...  Looks like a decent bloom where I did score it, so I think the oven spring would have been much better had I scored it through the middle of the loaf. 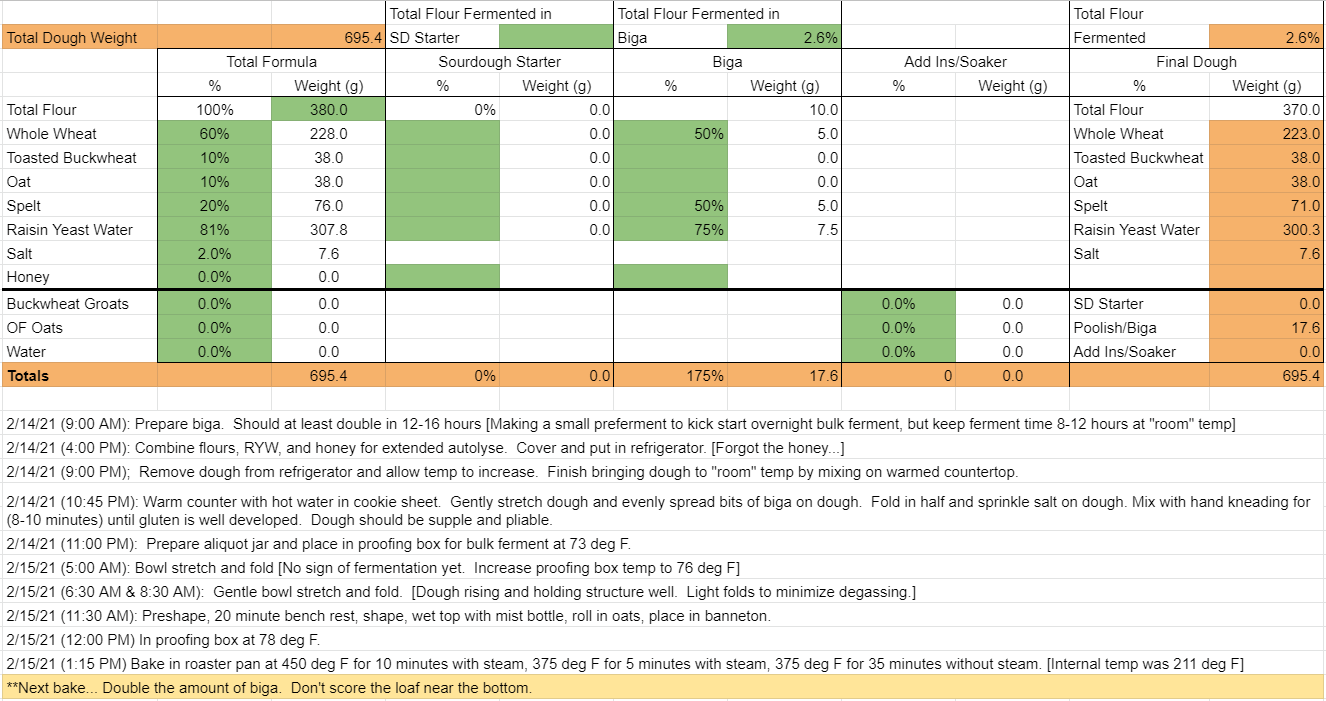 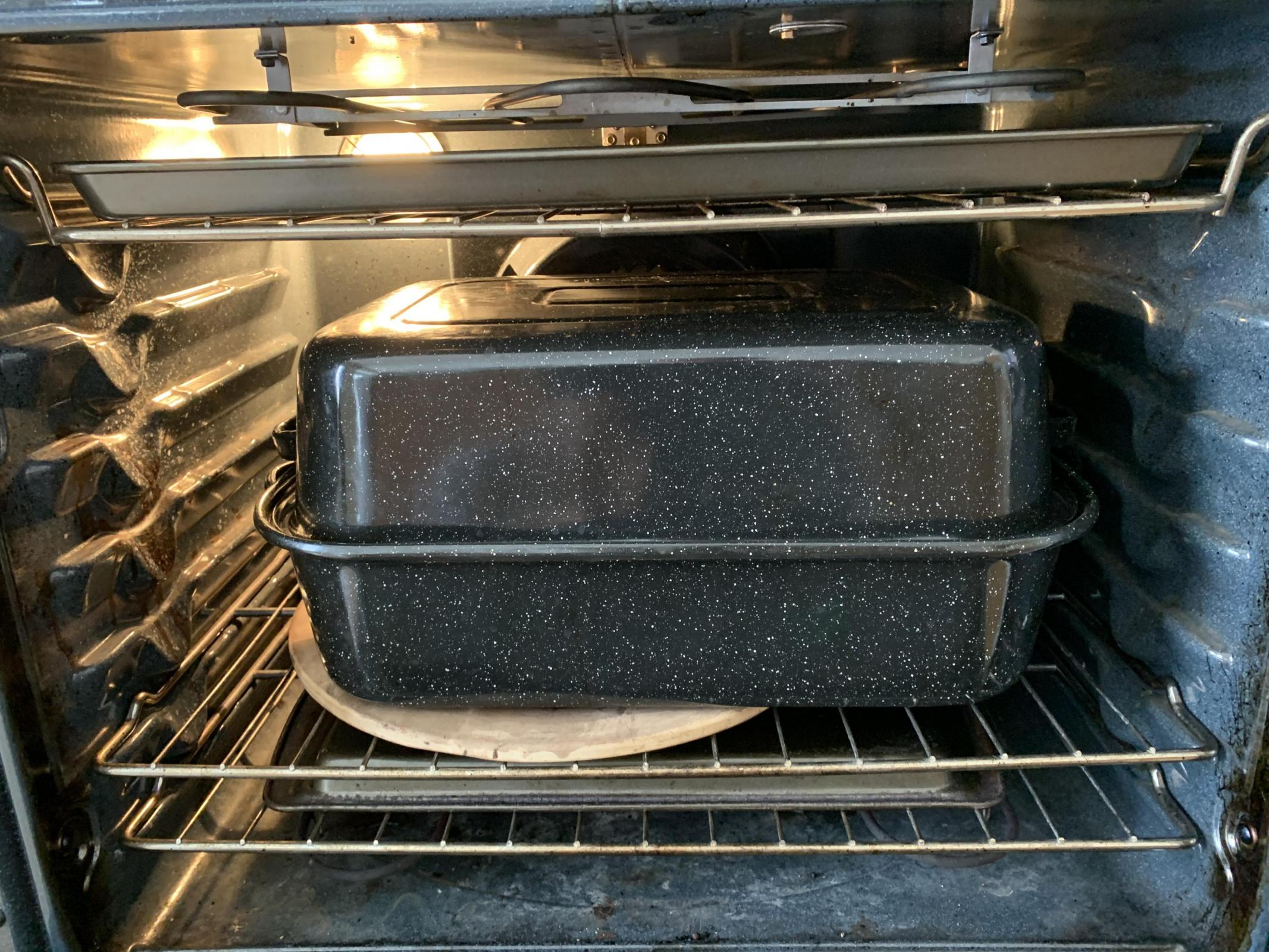 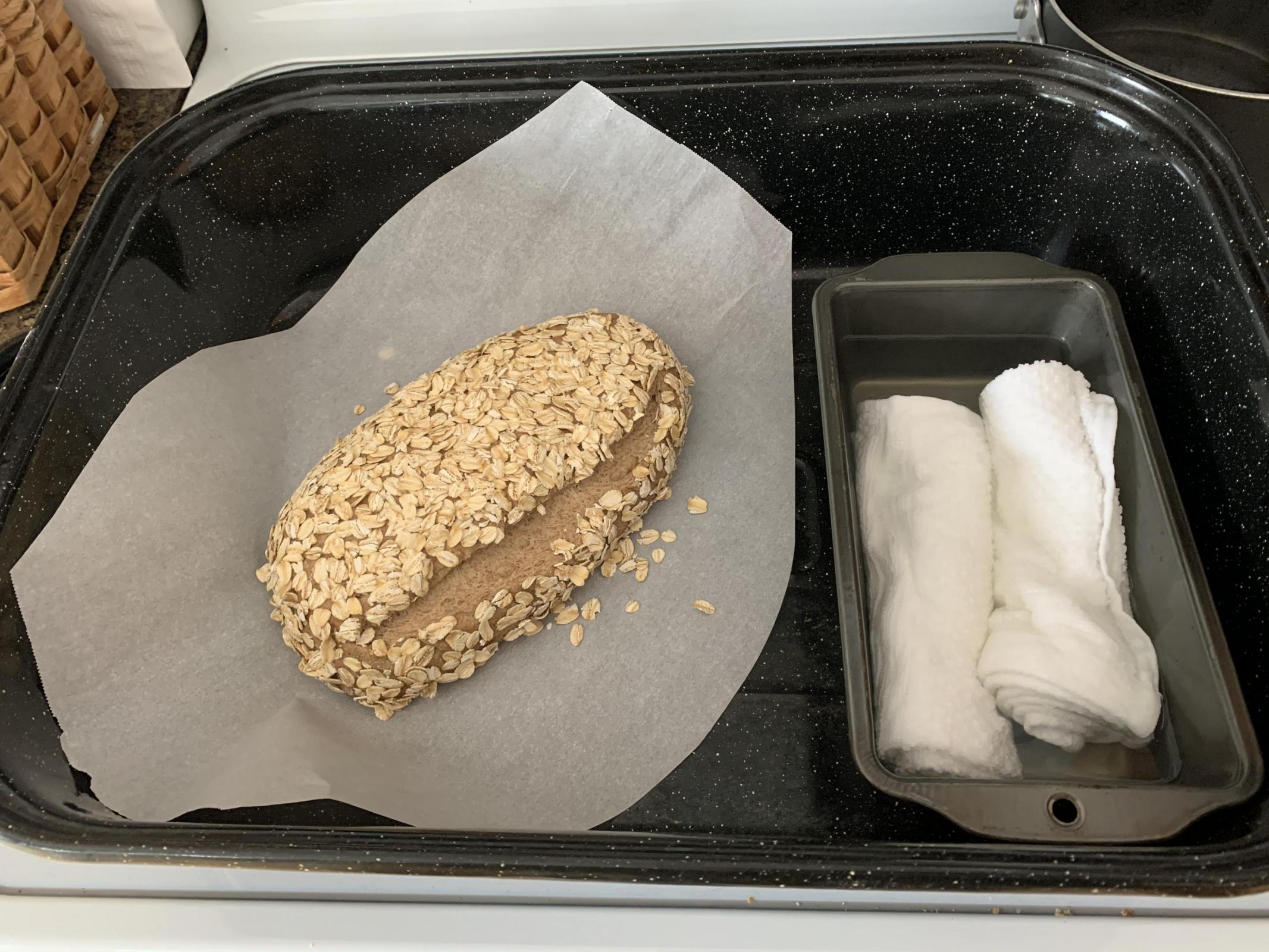 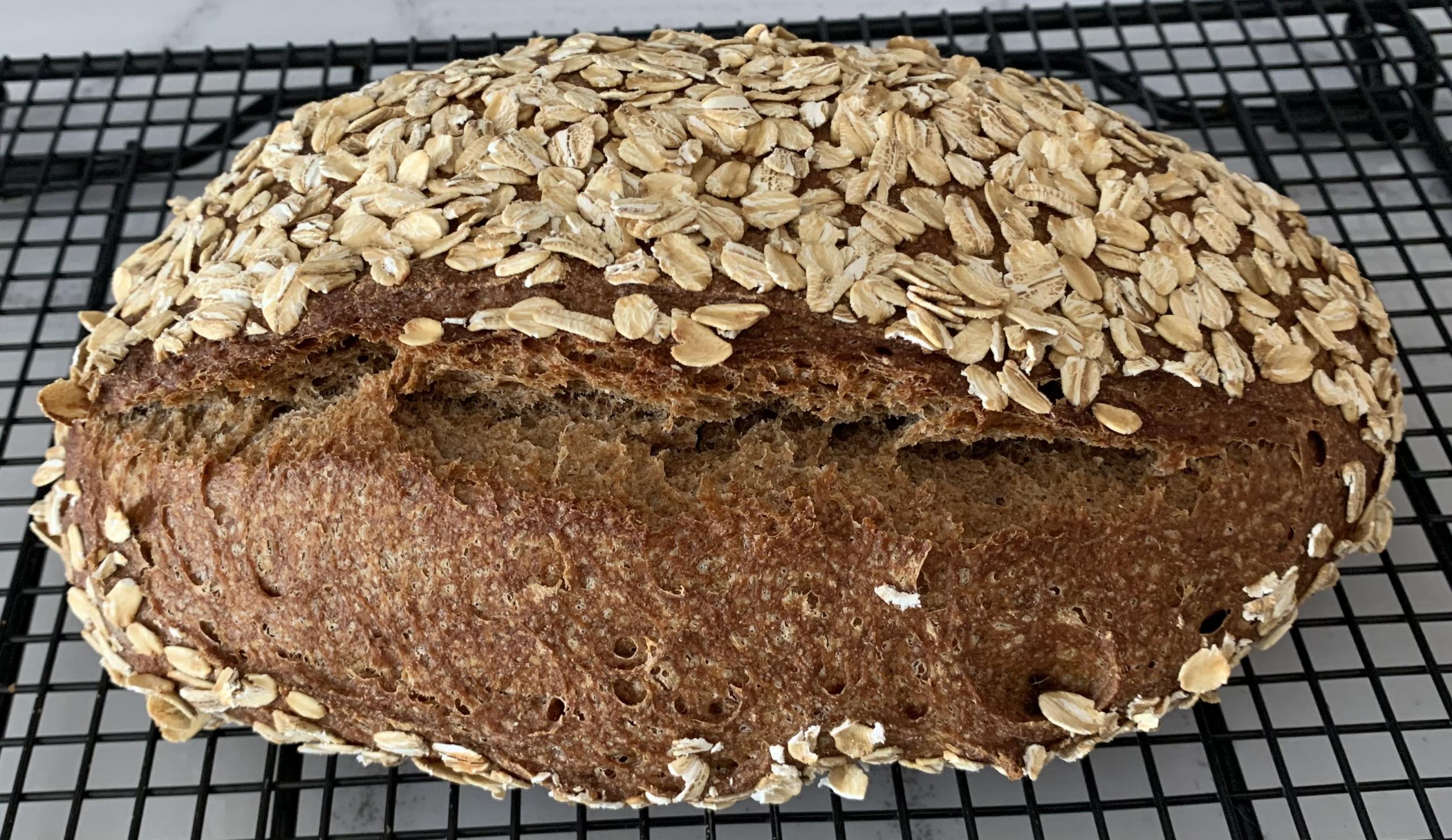 EDIT:  And the verdict is...  under-proofed.  Either that or degassed way to much during final shaping (did press it down before shaping, so might have been a little too aggressive). Aliquot jar was at least double and dough was fairly jiggly at the end of bulk ferment.  Might have to push it a bit longer next time. 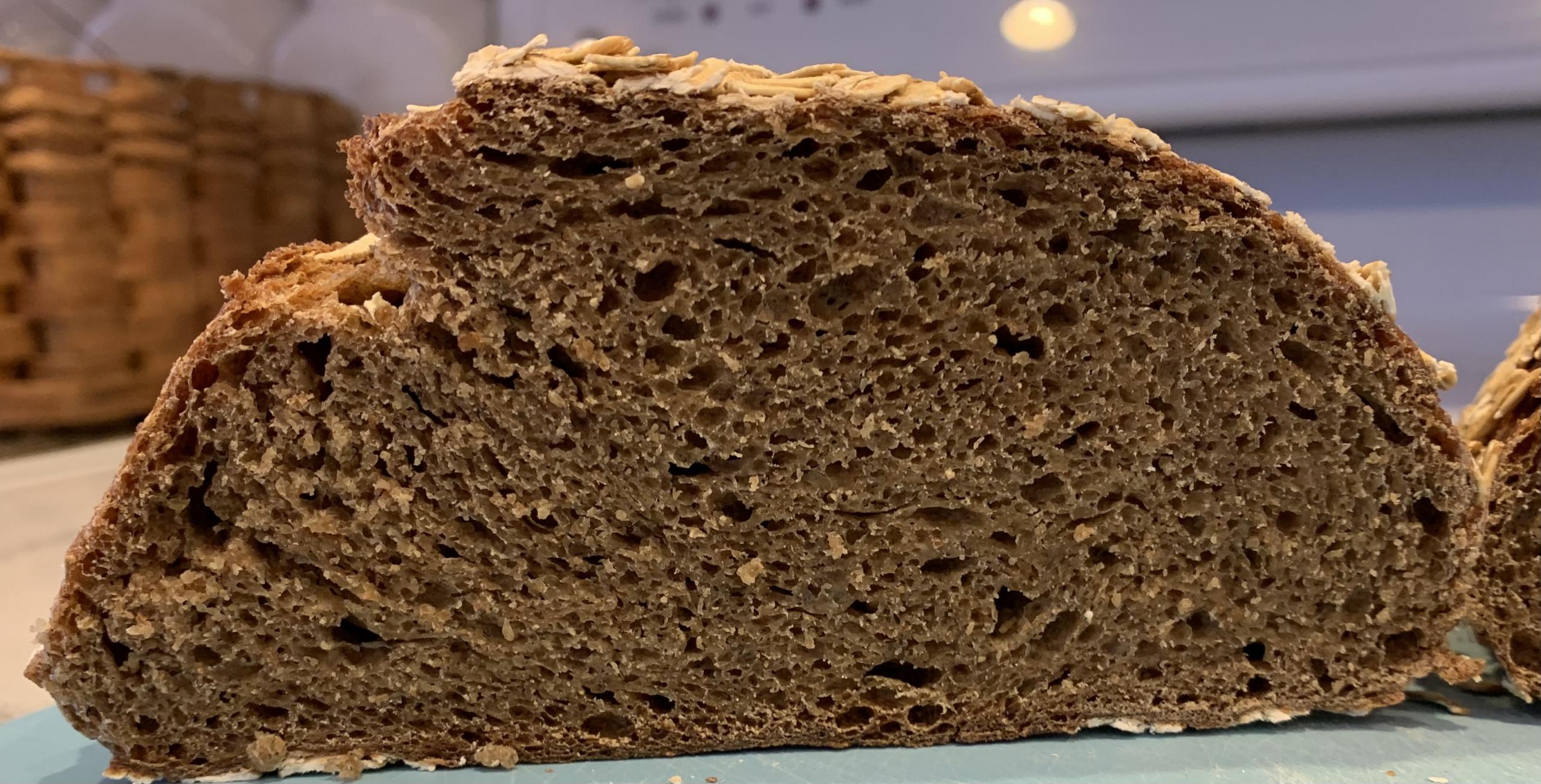 Thank you Benny.  I haven't decided if I want to spend the money for a Dutch Oven yet, so I figured this would be a good alternative until I make the final decision.  :-)

It's amazing the difference the flours can make.  I knew there could be a difference, but wow...  Night and day.  Not sure how to avoid that again other than just making sure I have a big supply of the flours that I use...

I love all-things-oats and many other whole grains,, so your bakes grab my attention, lol.

And while our turkey roaster is not as large as yours, I have done that exact same thing. I used wet terry cloth washcloths in a mini loaf pan instead. It works fine! And I have baked the occasional loaf in a pan inside the roaster, with the wet washcloth on inside as well, just to see the effects.

...it's a work in progress, but I learn a bit more with every bake.  If you like oats and you like buckwheat, this bread might be worth a try.  So far I've had it as toast in the morning and a slice with some butter for dinner.  I enjoy it, and think it will make a great grilled ham & swiss sandwich.  I haven't tried it as a sourdough yet.  Still trying to get the recipe right with yeast water, so can't offer up any opinions on a SD version, but it should work well with IDY or ADY in place of the yeast water.

Glad to hear I'm not the only one re-purposing the turkey roaster.  At least now it's getting used more than 3-4 times a year.  :-)