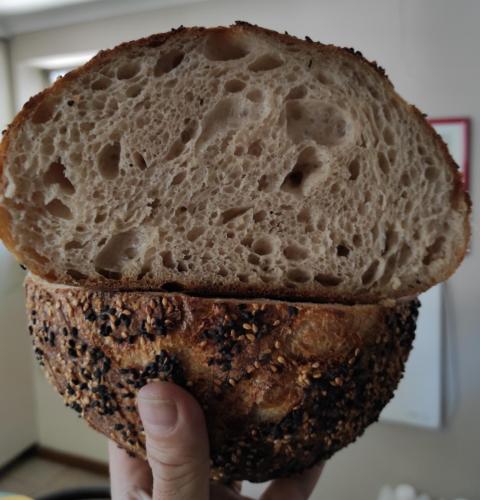 Like many bakers here I've been strongly influenced by Full Proof baking. The basic open crumb recipe has worked very well for me in the past, and the detail described in Kristen's method has allowed me to get a feel for where to push the envelope with the breads that I make, although, of course this method is not for a lazy baker!

I'm also currently in the throes of developing my own approach with how to use a stand mixer in my sourdough baking. This is new to me, so thought a bread story midway along this journey would be worth writing about here.

The bake described here has some unusual features:
- the stand mixer is used to assist with the incorporating the levain  (and this involves some experimention with bassinage to mix at a lower hydration at first with an increase the hydration afterwards)
- forgot to add the seed topping just after the shaping and added it just prior to bake, so tried a seed topping together with a fancy scoring (which ultimately didn't work out)
- finally the shaping was done after a higher volume increase than normal.

The process followed is mostly faithful to Full Proof's method, with the major change being that the stand mixer was used to incorporate the levain into the autolysed dough. And almost immediately after that the mixer was again used to incorporate the salt (without the 30 minute wait normally done with the method). 3-4 minutes of mixing was done on the slowest speed (using a vintage Kenwood) with 2 hour autolysed dough to incorporate the levain, followed by another 4 minutes to incorporate the salt. The salt was mixed into some of the held back water, not one of my best ideas as I realised I had to throw it into the mixture due to undissolved salt and it took a few turns of slopping around in the bowl before it was incorporated, I could see then why folks prefer to pour the salt grains directly into the mixer. Finally, an additional 4 minutes of mixing was done to slowly incorporate the held back water to bring the final hydration up to 80% from starting at around 70%. The dough was taken from the mixer bowl and directly given a counter fold.

Thereafter the rest of the process followed was fairly faithful to the Full Proof method - with a lamination 45 minutes later, then 3 coil folds around 45 minutes apart, a period of rest until the volume increase was achieved and direct to final shaping without pre-shape. Then directly into a cold fridge for overnight retard. In other stand mixer experiments I didn't do any of the lamination or folding as the machine mixer is capable of developing the gluten well. But it was done here, mostly to see the result of what happens when you do that in conjunction with machine mixing. Call me crazy, but the lamination was so much fun to do with all that gluten!

Got stuck in an unexpected online meeting at the time I was due to do the shaping and ended up doing the final shaping about 45 minutes later than I intended to. So, the volume increase was around 85% as measured by aliquot jar rather than the 50% that I was aiming for, and it was immediately placed into a cold fridge for overnight retard and baking the following day. Quite liked the extra benefit that gave to the crumb, and still had a fairly good oven lift which surprised me.

I might keep the volume target higher like that! Or try what Benny has been doing and shape at 50% and let it sit at room temperature until the aliquot jar says something like 85% before placing the bannetons into the fridge. Not sure what difference that would make and if it would be better.

The flours used for this bake are as per the Full Proof method, 79% bread flour (I did sub some of that with vital wheat gluten as my flour is only 11.7g/100g protein; with the VWG the final protein became 14.9g/100g), 20% wholegrain (Indian Chakki Atta was used), and 1% rye which came from the levain (levain was built with 90% white bread flour and 10% rye with hydration of 100%). When I repeat this bake I intend to use 'real' wholewheat instead of the Chakki Atta - I like seeing larger bran particles in my breads and it just makes it seem more wholesome, but I can't really articulate why this would be preferable! 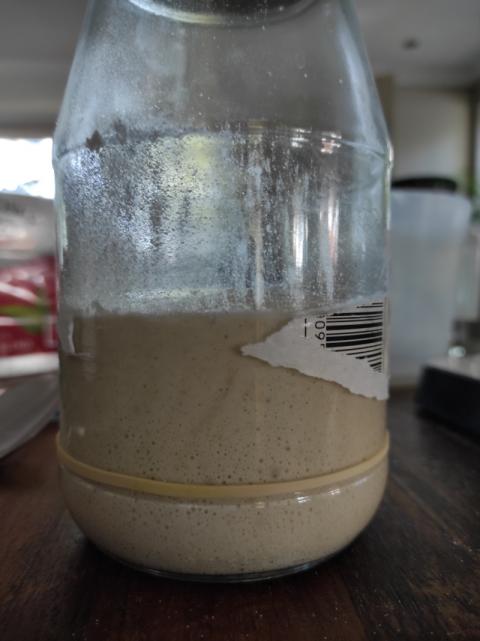 Lovely fizzy levain prior to it being mixed into the autolyse dough. This levain was only 2 hours 10 minutes old (or two hours since the overnight levain was fed further;  the growth from the height of the rubber band took 2 hours 10 minutes). It helps to be in summer conditions - room temp approx 26 deg C.

Levain was fed 1:10:10 overnight, and then the next morning it was given a 1:1:1 feed when it was at the height of the rubber band. The levain is 90% bread flour and 10% rye at a hydration of 100%. Most recipes suggest feeding 1:2:2 before baking, does it make much difference, I wonder? I'm just impatient and prefer a 1:1:1 feeding prior to using in a bake, although 2 hours makes it feel a little bit like I'm using instant yeast! 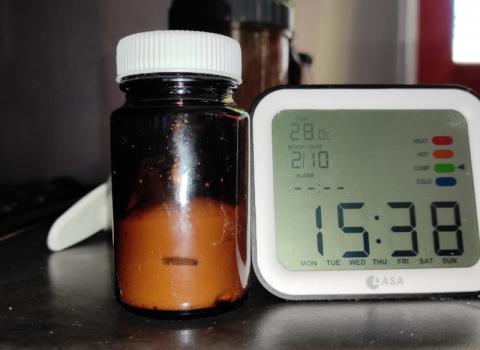 Aliquot jar at time of shaping. Trying to be more accurate with how I read the jar - there is a mark on both sides of the jar and a photo is taken with flash. Can digitally estimate the volume increase by counting the number of pixels on the photograph, and then I average the measurements from both sides of the jar. Was a little inspired to up my aliquot game by Benny's YouTube video. 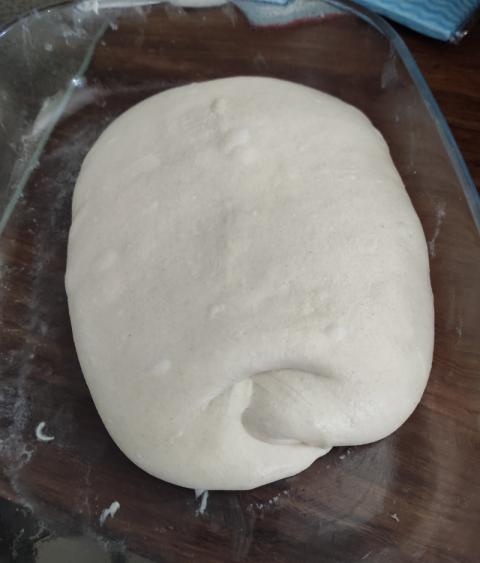 Prior to shaping. Still holding shape from last coil fold which was 2 hours previously. 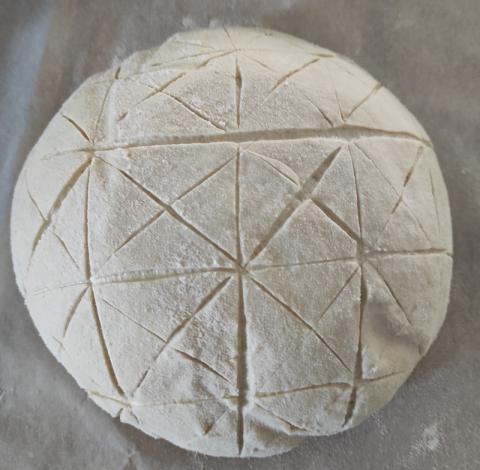 The next morning before baking. Had forgotten to add the seed topping after shaping, so just prior to shaping thought I'd do an elaborate score as I could see what I was doing. 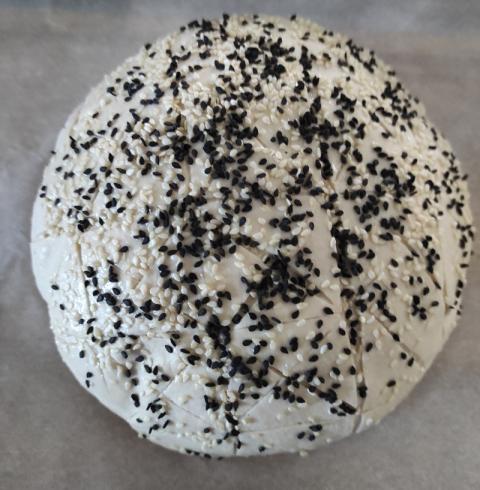 Seeds added after scoring using an egg white wash. Do prefer having seeds on my breads! 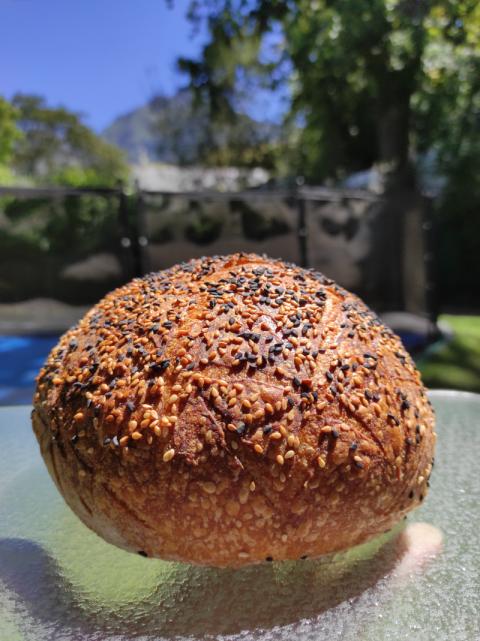 The baked loaf had a great lift. (Comme une vraie boule). The attempt at elaborate scoring was largely lost, but can't help but wonder if the scoring allowed the bloom to hold such a nice shape. 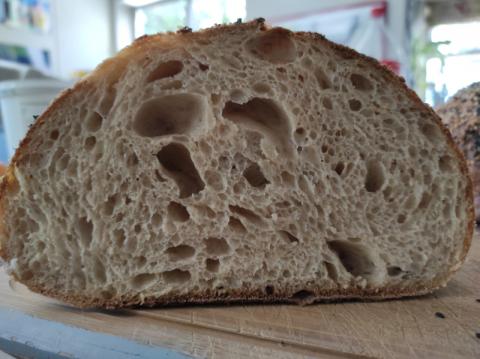 Pleased with the crumb, will certainly use the stand mixer again in my baking going forward.