As ever, I’m chucking out a portion of my starter every morning and doing a feed. Standard stuff so far for my routine.

but I’m getting fed up with keep throwing out that much starter. Not that I don’t think it’s necessary but just a waste that I couldn’t think to do anything with it.

so in trying to find a way to use up, that which would otherwise be thrown out, I done a little research and discovered that you can - in the broadest of terms- use your discard for many things ei pancakes English muffins,waffles etc.

but being British, I do love a good crumpet every now and then. Oh and English muffins! I’m interest in the idea of baking them too, like many other things, but I’ve not got their yet ? I’ve not enough going spare lol.

The recipes for crumpets I found, that use discard all vary slightly but all ask for the same thing

now after many failed attempts at cooking them as the mixture tends to burn if you do too much in a ring or cook them too quickly... I finally got the hang of it, sort off ?.

the issue I’m having is the ones I don’t burn, come out claggy, thin, spongy like cake and they are otherwise nowhere near what shop brought ones are like.
The flours I’m currently using are not likely to change at the moment as I’m trying to develop a starter with the same flour as im currently using in my bread loaves, so as to create a ranged profile on what I can bake with just that type of flour.

im not expecting miracles with it, it is a off cut after all but maybe a bit of clarity would help to improve a recipe that otherwise works, but could be improved.

my current recipe is

150 discard (made from 100 water, 50 whole meal flour, 50 strong flour, the remaining goes towards my fresh starter)

could it be the flour type I’m using? The consistency of the batter? The amount of bicarb? Or something else entirely? Or is this how homemade ones come out as apposed to shop brought ones?
as silly as it is, my ones don’t have that “wow” its a crumpet factor (told you it was silly) and I’d really like to get them closer to what I consider “a proper crumpet” (yeah I know) ?

Not that I can try any more right now, as the weeks worth of gathered discard I’d saved has gone towards the burning of the nine I now have on my work top, and the four edible ones which, naturally I’ve now eaten. But if there is a chance of some feedback on what could be the issue, (for the batch il attempt next week now) it would be greatly appreciated.

you have every day?  What are your normal amounts and routine for feeding?

Compare to this crumpet recipe:

feeding once a day about 9ish every morning, which at the current temperature of more kitchen, takes about 12 hrs to reach its peak. Then I leave it overnight to complete its cycle. and repeat the process in this manner.

cheers il give it a go ?

in baking as in cooking in general, two things matter: good ingredients and good recipes.

In sourdough crumpets you need good starter, a discard that is good, actually a piece of good dough, and good soda. If your discard is ruined, meaning that your cannot bake it or fry it and get a good crumb out of it, then it will spoil your crumpets, they would be claggy, instead of having a good bread crumb structure typical for muffins and crumpets.

If your soda is old, stayed for a long time opened after purchasing it, its leavening power will be reduced at least twice and you won't get a good lift. Your crumpets baked from stirred, deflated discard, would be thin, flat.

So, test your discard first. Just before feeding your starter, take a portion (without degassing it) and fry it or bake it as a muffin in your skillet. If it gives you a baked|fried skillet bread with good crumb, then your discard still had good gluten, not destroyed by long fermentation at room temperature, and you can use it every morning for a fresh batch of crumpets as you refresh your starter. You would take a small portion out to refresh your starter and the rest of it you would mix with soda and salt and bake your crumpets or muffins. The whole process takes 11 min from a cup of ripe starter in your jar to a bunch of hot crumpets on your plate: 3 min for mixing and 8 min for cooking.

If your discard is good, then the reason that your crumpets are thin is 1) the recipe you are using 2) quality of your soda (its freshness).

Try a new pack of freshly bought soda and this recipe 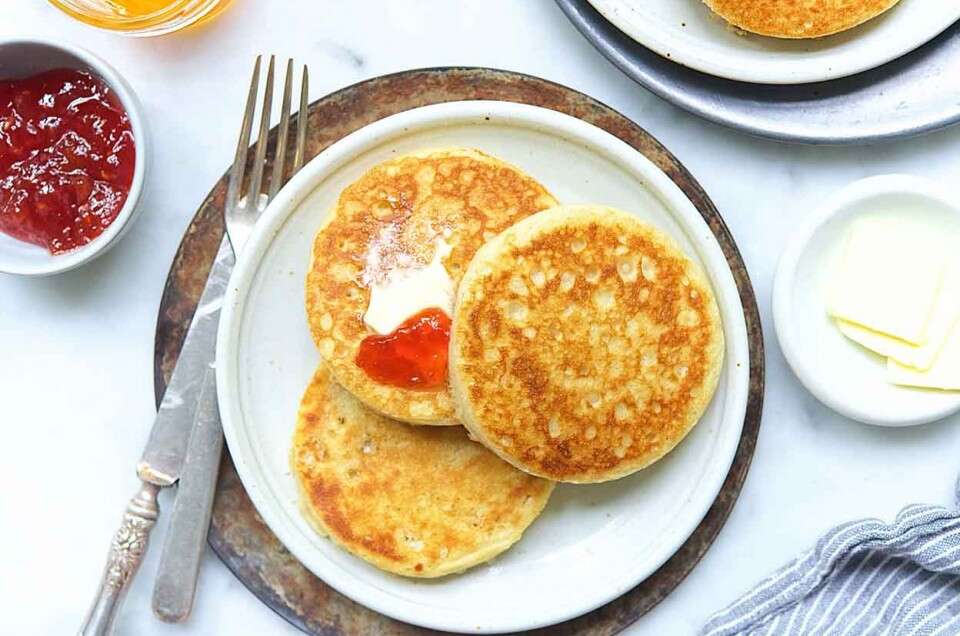 shown in Isolation Bake show, ep 3, starting at 27:00 min. See if your discard looks like that and if your method of cooking crumpets is similar to the one shown in the video starting at 27:00

Cheers il try frying a bit tomorrow when I have some spare. and il try that recipe as well as I keep seeing recommendations for it ?

but if I’ve understood correctly, what you have explained is that a reason that it might be claggy is because the discard which I’ve kept in the fridge, and been adding too every morning is beyond the point of having enough energy to work as it’s too old?

and if so, could it be that a complete cycle for my starter which is a 24 hrs feed, with it peaking at 12 hrs and then collapsing over the course of the next 12 hrs and repeating, is losing the needed gases before I’m then feeding again. So it’s already compromised before I’ve even collected it? Basically being to old? Should I be collecting the discard when it’s at peak stage?

I only ask as for some reason I couldn’t open the video you sent me to watch, il try again later
Im pretty sure it’s not the soda I’m using as I bake regular enough to have fresh relatively often.

Stephen, it's claggy because it received too much energy. Not that it doesn't have energy :) Energy it has plenty, that is why when you refresh your starter, the microbes are so full of energy, they transfer it to your starter and the refreshed starter rises. They produce gas which is full of energy and it expands your dough.

When our starter ferments for too long, too much energy from gas destroys gluten, the film that makes crumb fluffy, with open pores, significant holes with thin translucent walls around them. So even if we stir our old starter, if won't rise again, or won't rise as high, not from yeast, not from soda and we will have claggy, gum like or glue like crumb and thin, flat pancakes, instead of tall crumpets or muffins.

Yes there are two solutions to that

1) either do what you said: when the starter reaches its peak volume, separate a portion of it, deflate it thoroughly by kneading it or stirring it, and keep it refrigerated to accumulate a significant amount to bake a lot of crumpets and muffins over the weekend. And leave the remainder of your starter on the kitchen counter to ripen fully, fall down and be refreshed later on.

2) or stir your starter each time it rises, if you have time for that. It can stay on the countertop forl 24 hours, but you need to not let it deflate, fall on its own. Each time it rises to the peak, knead it or stir it and let it rise again. It can rise like that 3-5 times without any trouble and then be stored as a discard that is perfectly fine for use in any future baking.

I was pretty sure that my soda was good, until one day I baked an Irish soda bread and it was so ugly, ugh... It rose, but not enough. Then I learned that for soda baking without any baking powder in a recipe, soda alone, it should be super fresh, about 1-3 month fresh, not older than that. The difference in volume of soda breads is simply remarkable when I switch from a 6 month old pack to a freshly bought soda. The soda bread with fresh soda rises twice as high.

In sourdough crumpets it's soda that produces gas and bread rises. Energy doesn't come from starter, but from soda. You need your sourdough to be acidic enough (ripe starter) and your soda fresh enough to instantly get a lot of gas and that gas will make your crumpets or muffins double or triple in size and stay tall.

This has been hugely helpful and given me a lot to consider for the next time round . Thank you