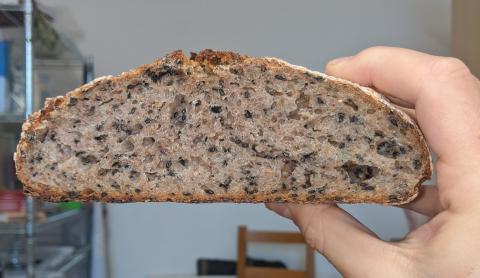 I have been very busy with work the last week, so when I thought I found a time window where I could back I jumped on the opportunity. The idea was to build a quick levain in the morning from the refrigerated starter, go to work for a short time, and then mix the dough when I am back. As you might have guessed, I needed much more time at work than I anticipated, and basically my 1:1:1 levain spent ~9 hrs at 24°C, which is of course way too long. It was clear it had peaked a long time ago by the time I was home (although not sure how long it needed to peak exactly).

I decided not to waste the levain and made a dough anyway. Quite a simple dough, a little over 75% hydration, 40% whole wheat, and with 8% toasted black sesame seeds: https://fgbc.dk/19u4

Did a short fermentolyse (around 20 min), then incorporated salt, sesame seeds and a splash of extra water to dissolve the salt. It was quite late already, so I used warm water (~35°C) and kept the dough in my "proofer" to keep it warm. Didn't do slap&folds, like I tend to recently (it was time for dinner instead), so did three folds 30 min apart, gluten was nicely developed. Then left with an aliquot jar, keeping an eye on the rise. It took its time, but I stopped bulk when saw ~30% growth in the jar.

And here is where I ran into an issue: it appeared that, despite modest growth in volume, the dough was overproofed and the gluten started degrading! I attributed it to using a very acidic overripe levain, and heating the dough from the bottom: it seemed as though the bottom part was affected much worse than the top. Regardless, I managed to coax it into a decent batard, and even coated the top with white sesame seeds. I had to stitch the dough in the benneton to restore any tension after manipulating it to coat with seeds though, it became very slack. It was near midnight then, so I just shoved it into the fridge until morning.

So in the morning it behaved OK when taken out of the banneton with almost no spreading and was fine to score - but cooling the dough of course helps a lot with these issues. Baked in a preheated pyrex dish as a DO. The loaf spread a little during baking, and the oven spring was quite small, but still it was far better than some frisbees I have produced in the past.

The crumb is really nice: not very open, but not dense anywhere. Taste is great - more sour than I usually get, and perhaps just a tad too sour for my taste when I tried a slice on its own, but the acidity is not obvious when eating with toppings. Sesame flavour is spot on. It was delicious for breakfast with avocado and goat's cheese. 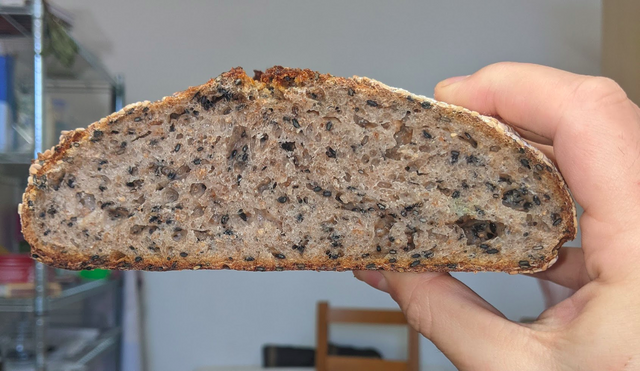 So an interesting learning experience for me! I think I need to learn how to wield the ancient powers of heat - at least three times since I started using the heating setup I've had gluten start degrading on me, and that had never happened before. A very useful tool, but dangerous in untrained hands! I guess especially in combination with a sour levain and high inoculation, like in this case.

The crumb looks quite nice Ilya and I’m sure the sesame added so much flavour to your bread.  Work does sometimes get in the way of plans for baking, happens to all of us sometimes.  However, you were still able to bake a good looking tasty bread so all was not lost.

Thanks Benny! I am very pleasantly surprised - basically, oven spring was severely compromised, but otherwise it's great tangy bread.

I finally took the black sesame in the dough from your book, and it's delicious! I only tried it once before and thought I preferred white sesame, but I think there must have been something else wrong with that bread, not the black sesame.

The black sesame seeds are so much more flavorful than the white ones aren’t they.  Glad you like them too Ilya!