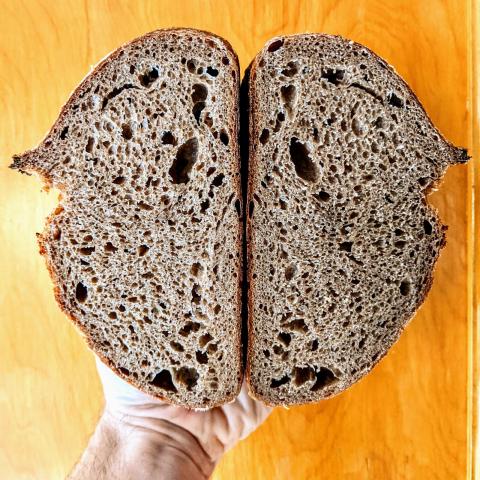 I've long kept a personal diary online of my bakes to help track progression and variables and thought it might be nice to begin sharing them here. Over the years I've learned an astonishing amount from contributors on this site, I've fallen down rabbit hole after rabbit hole chasing theory on microbiology (you're amazing Debra! When will you offer classes again?? Years before I found this site I started my first starter with Artisan Breads Every Day!), dough strength, gluten formation, etc. It's not unusual for me to maintain several open tabs here for weeks on end. I also choose to bake with 100% whole grains from my local mill, originally for the nutrition and flavor (and challenge!) but increasingly because it supports a local economy and agricultural system that align with my beliefs. I'm not particularly patient, but I do tend to be rather methodical. As such the diary has been an enormous help in recognizing cause and effect for experiments that take a few days to complete, particularly because I'm often inspired midway through to try ten things differently next time. That said, I've settled into a basic routine that I'm happy with and am more comfortable isolating one or two variables at a time. I'm currently playing with dough strength in an attempt to push my whole grain as far as I can. I've recently been inspired by Mariana's comments in this thread, and for this last loaf I dusted off the KitchenAid to see what would happen. Spoiler alert, not much. We own the Artisan model unfortunately so the dough hook isn't particularly effective, but it was worth a shot. The rest of the process was as follows:

Autolyze for 5 hours followed by inoculation, a brief rest, and salt. My current theory is that building strength during the autolysis is beneficial, particularly when working with whole grains. So there was a lot of Rubaud and rolling around in the bowl during this time. After inoculation I laminated this dough twice, which is also a relatively new technique for me, but the effects were inconclusive. Although I prefer long cool fermentation I made a scheduling error and was forced to bulk at 80℉ to avoid 2am completion. I generally shoot for about 75% rise before shaping, followed by an hour or so at room temperature, then a retard in our very cold fridge of at last 5 hours. This loaf was baked after three nights in the fridge.

This is not the best loaf from my most recent bakes, but they've become very consistent. As such I think I'm now better able to dial in on some of the more subtle effects from the process. As Trevor Wilson says, it's about 80% fermentation so as that remains consistent so too do the bakes. For the next bake I plan to incorporate some ideas I have based on watching what happens with Richard Bertinet's dough.

This site has become a respite of sorts from what feels like an increasingly toxic internet culture. The quality of contributions and dialogue is a real breath of fresh air and I thank you all.

Your process obviously works.  For a 100% whole-grain loaf, the crumb is about as open as one could hope for.  And yet, it isn't so open as to risk dripping marmalade in one's lap.  The slightly compressed zone at the bottom of the loaf suggests that it might have been just a tiny bit over-proofed but not enough to have harmed anything.  All in all, very nicely done.

I appreciate the kind words.

Thank you! I read all of your posts and really admire what you're doing, so that means a lot to me.

That’s so kind of you to say, I appreciate it!

The heirloom wheat sounds intriguing to work with. It must have a nice flavor. Your local mill sounds like a boutique flour shop. Do they also sell the berries? I like to mill my own. The TFL thread you linked to, chasing thin and crispy, is one of my favorite threads from the TFL archives.  Lots off good info although I have come to believe that the flavor of the flour is impaired by intensive machine mixing. I gave up on making 100% whole grain lean breads and use The Approachable Loaf because I found it to be a more reliable (non brick) method for me. I may have to try your recipe.

It's interesting that you mention The Approachable Loaf because that is a formula published by the The Bread Lab, the very organization that revived the Heirloom French Renan that I used in this loaf. My local mill is named Grist & Toll and they're often cited in articles in which the Bread Lab is mentioned, including this 2015 NY Times piece describing both the inception of The Bread Lab and the hope to develop Renan.

of the French Renan grain to the WSU Bread Lab. We did a Community Bake about the Approachable Loaf a while back so I am familiar with the story. I am always interested in trying new grains to find ones that have that heirloom flavor. I checked out the Grist & Toll website but it looks like they only sell flour and not the berries. I use the local Wheat Montana grains which are pretty good but I am always looking for others to compare it to.

I'm also looking for these berries.  Please let me know if you find a supplier.

I'm primarily interested in whole grain baking, and it is great to see more successful examples.  Please continue to post your thoughts and observations.  It is impressive the whole grain dough held up for 3 nights in the fridge!  Was it very sour?

I have not noticed significant differences with loaves baked after such long retards. Increased sour was the goal when I originally experimented with this but now I do it for convenience (I'd rather keep one loaf in the fridge than two in the breadbox). We keep our fridge colder than what I believe is typical, so that may be a factor. It ends up being a compromise between the two (strength and sourness) and the shift happens around the 90 hour mark for my dough. Beyond that point the sourness becomes more prominent but the oven spring declines.