How can I separate two new canning lids that are stuck together?   Thanks. 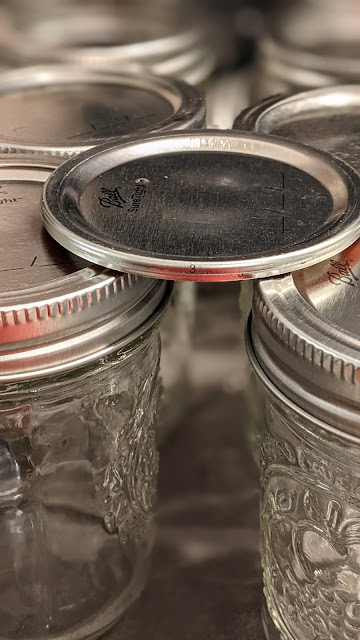 Drop in boiling water and prise with dull knife?  Have to boil anyway when canning with them.

If these are the new Ball Sure Tight lids you might need to cautious about the boiling water. Check out this post:  livilivinghomegrown.com/changes-in-canning-lid-procedures/. It might work to just put them in very hot water from the tap. Regardless of the method you chose to separate them I'd not be inclined to use the top lid of the pair out of concern that there was a problem with its sealing compound.

Hot & Cold. Lay one side on a hot sponge and apply an ice cold sponge on the other. They should pry apart more easily if they have formed a vacuum seal between themselves. However, if the sealing rim is particularly sticky and they were shipped in a hot environment (essentially hot gluing them together), them a dip in boiling water for a few seconds and a tip of a sharp knife or razor may work.

Alternately, freezing the lids may help release the tackiness of the sealing rim if they didn't totally melt and flow together.

Had made the mistake of boiling (sterilizing) the lids to begin with. Then accidentally stacked the wet lids together. Already tried boiling them again, but they're still stuck. I'll try the ice/hot sponge method. If still doesn't work, I'll just use the double-lid as one. Hopefully, when the bottom lid got sucked to the bottle, the top one will release.

Separate questions: Does orange pith have more pectin than the peel(the zest part)? Can I only use the peel (plus pulp) to make orange marmalade?

Generally, what ratio of fruit to sugar by weight is considered low for the marmalade to gel without using commercial pectin? I am able to do it 1:1. Have you used  even less sugar?

I made marmalade twice in the last few weeks - a small batch, followed by a larger one for gifting. I am no expert by any means, just sharing my recent experiences.

From the recipes I read, it looks like the zest doesn't have much pectin, but the fleshy sections of the fruit have it in spades. The first recipe I used recommended not using any of the pith, saying it adds too much bitterness. The oranges used for that batch were very sour and gave a bitter flavor, even after removing all the pith. My husband loves it. ?

The second recipe I followed (using different oranges) was much easier and uses everything. It came out quite good, and we both are enjoying the flavor - only a hint of tangy bitterness, even using the pith. My husband says "It tastes like real fruit, not fruit flavored sugar". I used a mandolin to slice the oranges. It made the whole process much easier, and gave the right thickness in consistent sizes. That has proven helpful for spreading.

Lesson learned: it is possible to cook down too far without getting a burned flavor. I could have quit cooking it sooner than I did and it would have set just fine. The result was an exceptionally thick (dense) marmalade. It tastes great! And spreads on toast just fine without melting and running off the bread.... Its just a little hard to get out of the jar, lol.

Not sure about the sugar part of your question. Hopefully something above is useful!

A quick thought. If you end up using the 2 stuck lids, I'm wondering if that will interfere with the jar being able to seal correctly? Probably not an issue if you use that jar within the next few weeks, maybe not use that one for pantry storage? ?

Knowing that the pith doesn't matter, I will forego it-can't stand its bitterness. I have a more efficient way to peel the zest than that shown in the recipe. In fact, my workflow is more efficient overall. I will share my method later in a separate post.

But for making panettone or homemade fruit-flavored yogurt. I normally don't use marmalade, but a panettone formula I recently found uses loads of different citrus fruit paste. So I'm going through all this trouble to make citrus marmalade to make the prep easier.

citrus fruit paste?    Candied fruit?  In panettone the various bits of candied fruit are part of the enjoyment.  Suddenly a burst of flavour.  Careful about using infusions instead that may make the crumb taste the same with every bite.

Thanks for the tip on using a mandoline to slice!  Hadn't thought of it, but it sits in the cupboard waiting for Cara Cara oranges to show up locally.  Haven't made marmalade from them before, but love eating them and they make a tasty meringue pie.

HERE is a link to an easy-no pectin Lemon Marmalade. She explains it very well and the recipe is easy. She also has other citrus marmalade recipes but this is the one I made. I don't know if she has a low sugar recipe. For that you may need pectin as a thickener.

Thanks for this one. Lemon is on my list to make in another few weeks, when a friend will have more lemons than she knows what to do with. I've been pondering a lemon lime mix too, but not sure how much I want to make.

I have been making marmalade for many years and I believe I have honed the recipe to perfection. My marmalade is always made with Seville oranges, as we love the bitter/sweet/sour combination of flavours.  We are coming to the end of the Seville orange season and I have just made this year's batch of 5kg.

I used to do 1:1 oranges:sugar like you, Yippee; the set is fine, but there is a tendency for the marmalade to go mouldy in storage or in opened jars. So now I do 1:1.5 - I do add a couple of lemons to the recipe and use the peel of those as well as the oranges, so the true ratio might be more like 1:1.4

Lance, are you able to to share it?  I have my own and my mother's canning books, but have never been happy with past efforts.  I haven't made any for several years but would like to tackle it again for myself and gifts.  My husband dislikes it, more for me on homemade bread.  Thank you either way.

Yes, no problem; it's currently a hand written recipe only, so I have scanned it and you can find it here as a pdf. My hand writing is not the world's best, so let me know if you need any translation!

The main improvement points over most recipes are as follows:

Of course if you haven't got all the specified equipment you can improvise.

I hope you give it a try!

I'm used to making jam and jelly in order to use up a large harvest. In my limited experience, I have found that marmalade doesn't use up that much fruit per batch. With the recipe linked above, the 1.2lbs of fresh-off-the-tree lemons was really only 5 lemons-not a half bushel of them. But it requires 1.2KG of sugar! So there is a little bit of fruit for a nice sized batch of marmalade. and it looks so lovely!

Ahhhh, I get it, now! Citrus brings less juice and almost no sweetness to the final product, where berries etc bring plenty of both. So with marmalade, you have to make up for the difference. Sugar (in some branches of cooking, no clue in bread) is counted as liquid, so it adds both. Thank you, I just learned something new!!

As I have purchased some small oranges I thought would be easy peeling.  They are horrible to peel, have super thin skins but smell fantastic and the  fruit is little on the sour side.  They would make better marmelade.

Hi, if it’s hopeless, just use it for storage , substituting whole top with mayonnaise jar cover. They make cute storage containers , save money and give you a gold star for recycling.

The first recipe I ever used for orange marmalade called for lemon seeds to help gel. I was surprised when I removed the seeds how much gel surrounded them.

I love kiwi pineapple jam! I make it with hardy kiwis that grow outside my kitchen.

Could you please share the recipe and some pictures?

Hi, Yippee, I checked my two jam cook books and they don't mention using lemon seeds. I probably got the recipe from a book from the library.

My kiwi-pineapple jam is the color of green olives. Definitely loses the bright green. I wonder if, since they're the small hardy kiwis and I use a Mouli mill, whether some of the brown comes from pressing the skins. Tastes great no matter the color!

In 75th Anniv. Joy of Cooking cookbook, page 941 para.2 - 3 :  "Since seeds and centers are rich in pectin, tie them in a single layer of cheesecloth and add the bag to the fruit. At the end of cooking, squeeze the juice from the bag and blend it into the marmalade. The spongy white pith just under the colored citrus peel is where most of the pectin lies, so always include some in marmalade."

The book recommends cutting the fruit first in half and the using a scissors to remove the stiff center and get at the seeds.

I've boiled, drained, and boiled the ? piths  five times but they still taste awfully bitter. How do you process the piths to get rid of their bitterness?

And I wonder if the repeated boiling and draining would deplete the pectin in the piths.

P.S. The bitterness has become much more mellow when the piths were cooked with sugar. So I think the marmalade is fine.

Marmalade is best with a bit of bitter, separates the real orange marmalade lovers from the orange juice squeezers.  Lol

When I make candied orange peels I try to remove extra pith, gets a cold soak then boiled and simmered for half an hour. Hot water gets thrown out. Rinse peel and repeat with cold water bringing to a boil, boil for 30 min.  Then they get candied further.  But that usually does it.  A lot will depend on the type of orange.  I don't know any kids that like  orange marmalade, beware of using them as testers. On the other hand, maybe you eventually don't want orange peel in the recipe.

Try rolling some of the peel in sugar before you taste it.

Baguettes based on, Jeffrey Hamelman's...
Butter Cracking
Greetings from Tux, Austria
What type of fineness should be expected?
Frisian Black Bread TRB
END_OF_DOCUMENT_TOKEN_TO_BE_REPLACED