My first attempt at the Semolina/Durum CB, and I'm humbled by the knowledge and skill in all the bakes so far.  There's still a long way for me to go on the learning curve!  Special thanks to Abe and Benny for answering many newbie questions over the last couple weeks, which has helped me tremendously in getting to this point.  I think I know just enough now to crawl.  :-)

I have been struggling with my SD starter and just didn't have the confidence to go with an SD version of this recipe.  So, I opted to try it with a poolish instead.  I kept the preferment percentages and hydration the same as the posted recipe and adjusted the formula to a 625g dough.  I kept the amount of IDY on the low side to extend the rise.  I don't know if there is any flavor development by going slow with IDY, but I had the time today, so went that route. 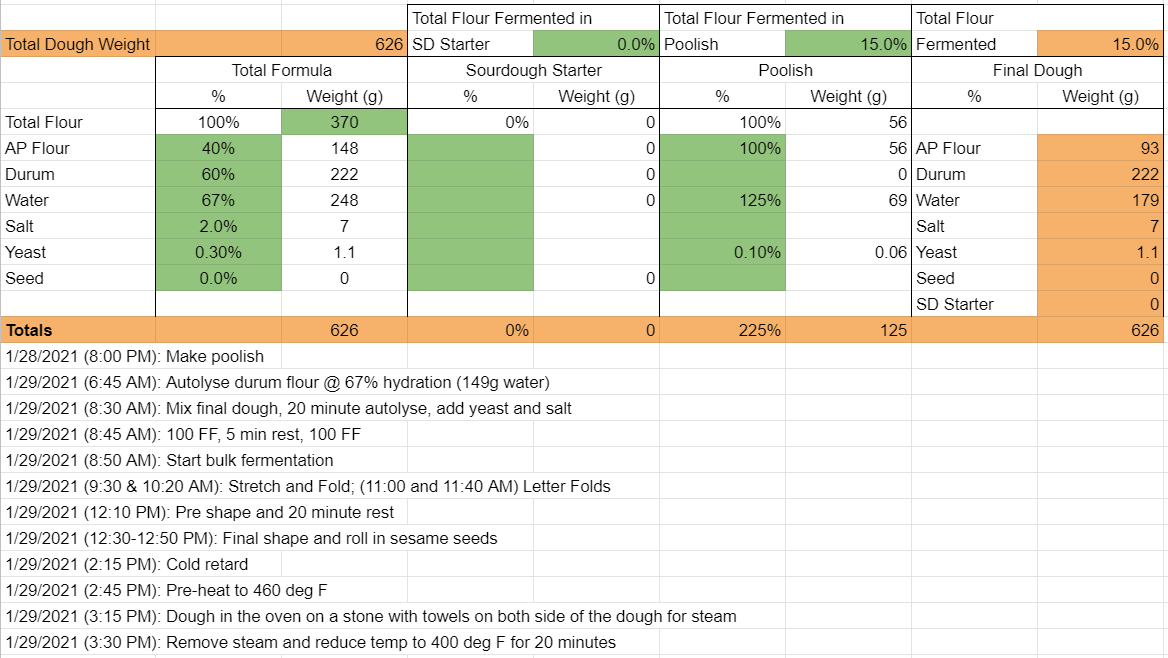 Did my best to estimate the 0.05g of IDY used in the poolish (measuring spoon is 1/4 tsp).  Used the rule of thumb from Weekend Bakery. https://www.weekendbakery.com/posts/more-artisan-bread-baking-tips-poolish-biga/ 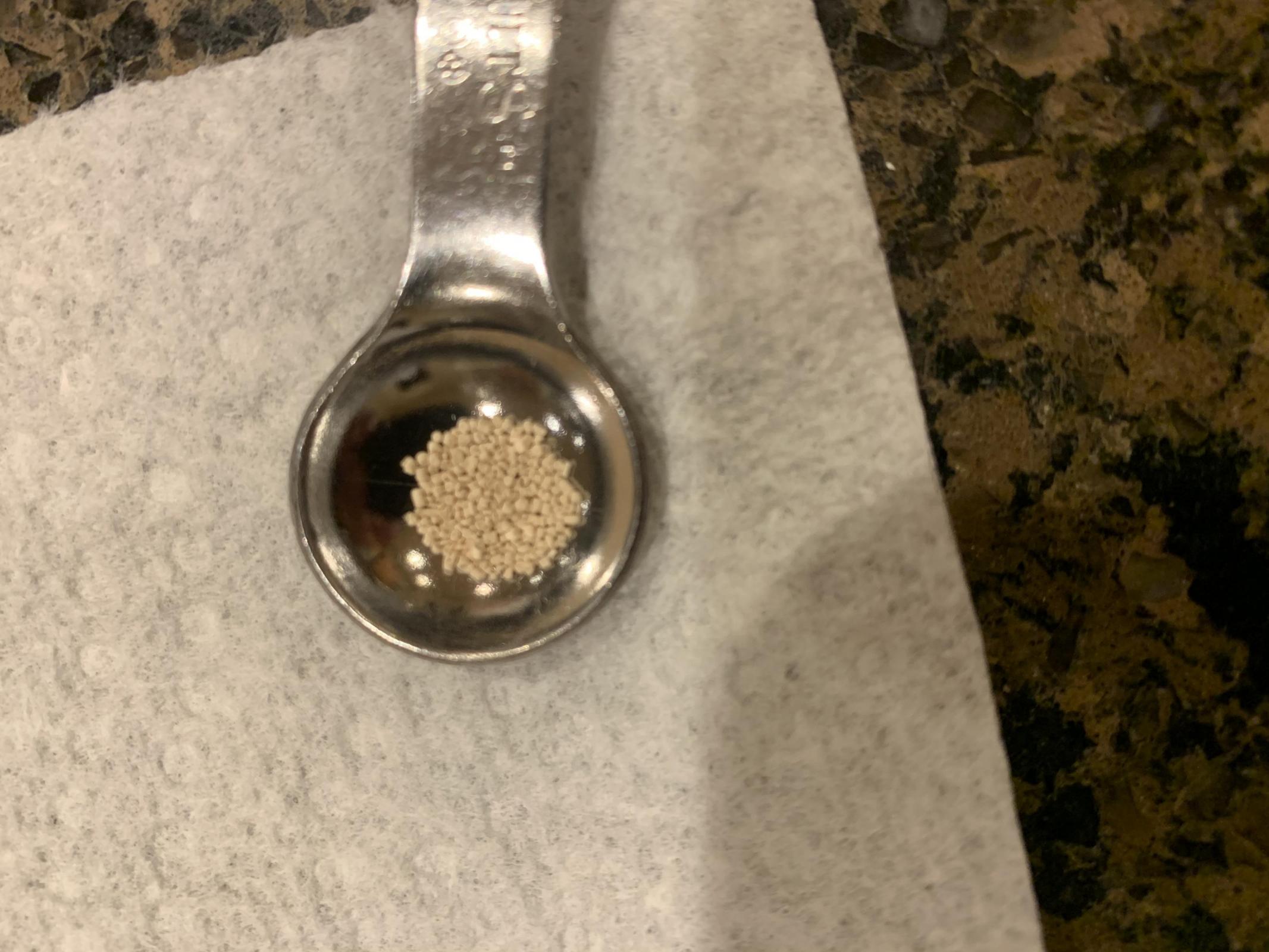 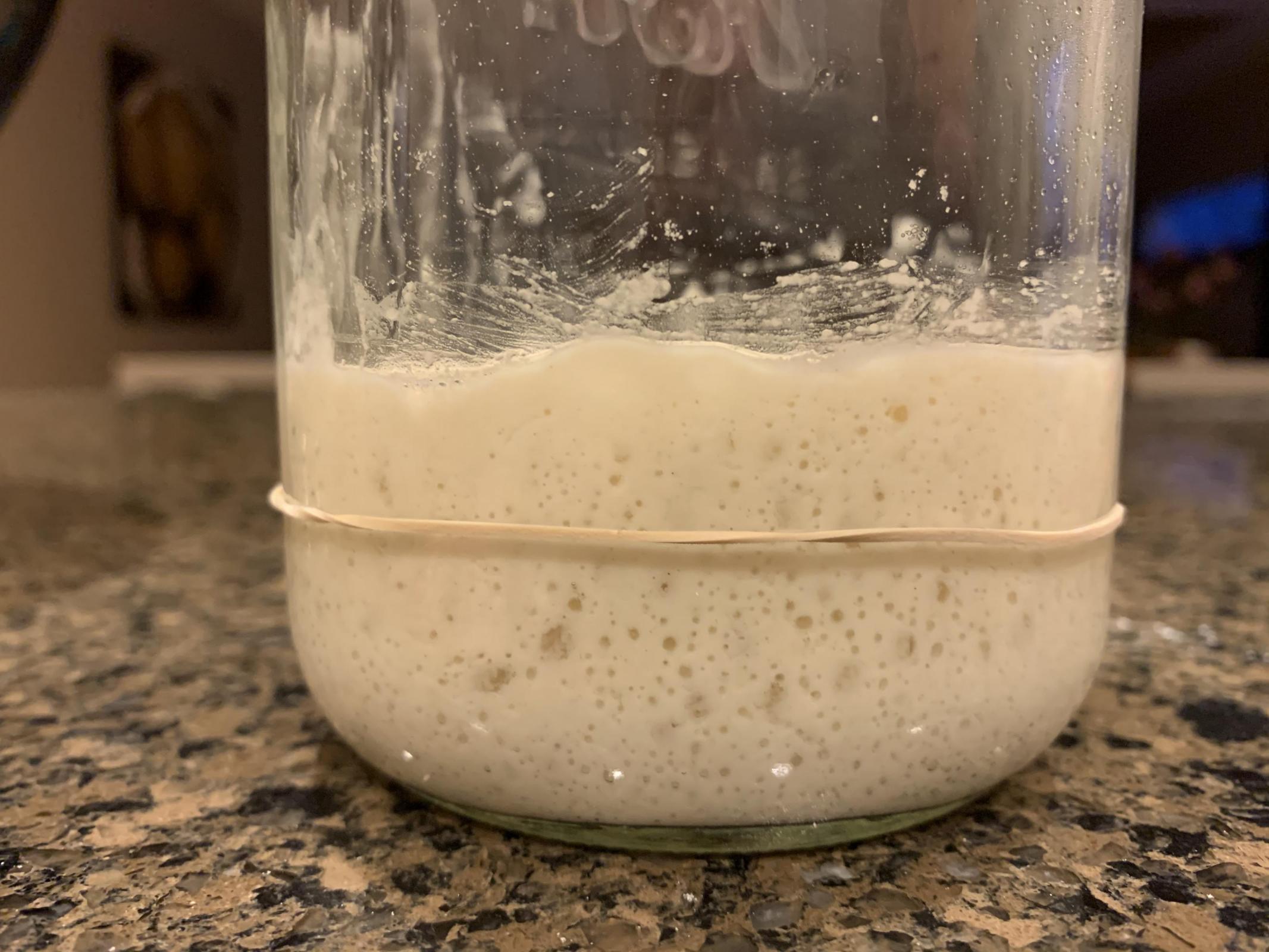 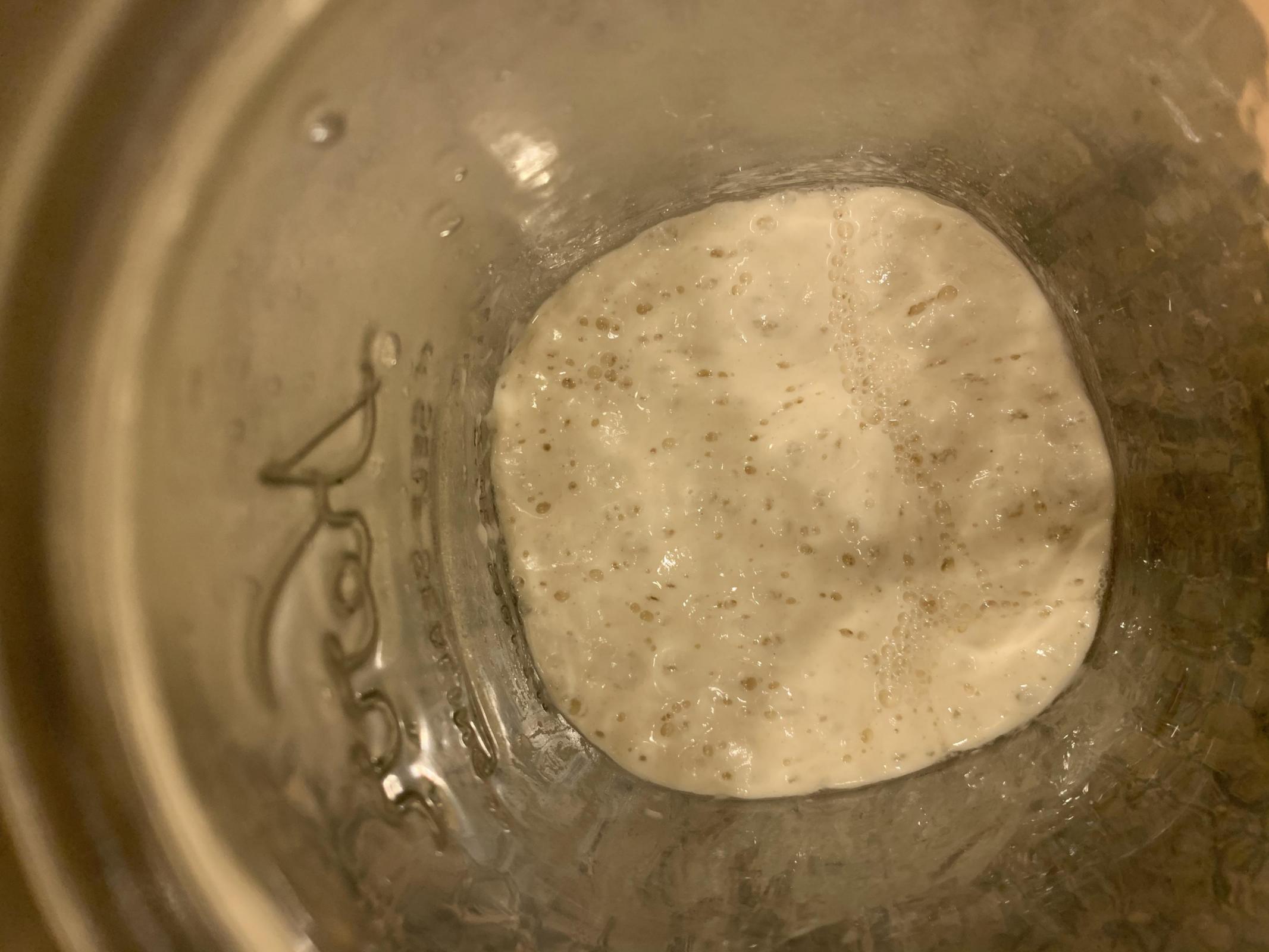 I did a 90 minute autolyse on the durum flour (Caputo Semola Rimacinata), and then combined.  Dough was easy to handle and came together quite nicely with 2x 100 FFs separated by a 5 minute rest.  During BF, I did stretch and folds first and then letter folds.  I have really only tried to make sandwich loaves to-date and prefer a fairly tight crumb.  This is the first time I wanted to see if I can get some openness to the crumb, so was more gentle with the second two folds.  BF and Final Proofing were done at 82 deg F.

I think the sesame seeds will add a nice flavor, but I'm not sure I'll go that route again.  After final shaping, I misted the dough and rolled it in seeds, hand applied seeds, and fidgeted to try and cover all the surface.  I'm sure it gets easier with practice, but I might just put them in the dough next time.  Covering the outside while worrying that I'm losing my final shaping might be a little more stress than what it's worth.  :-)   Put seed covered dough in banneton with seeds down for final proof.

Used my new lame for scoring after final proof was complete, and surprised how easily it went.  Maybe a little too deep... 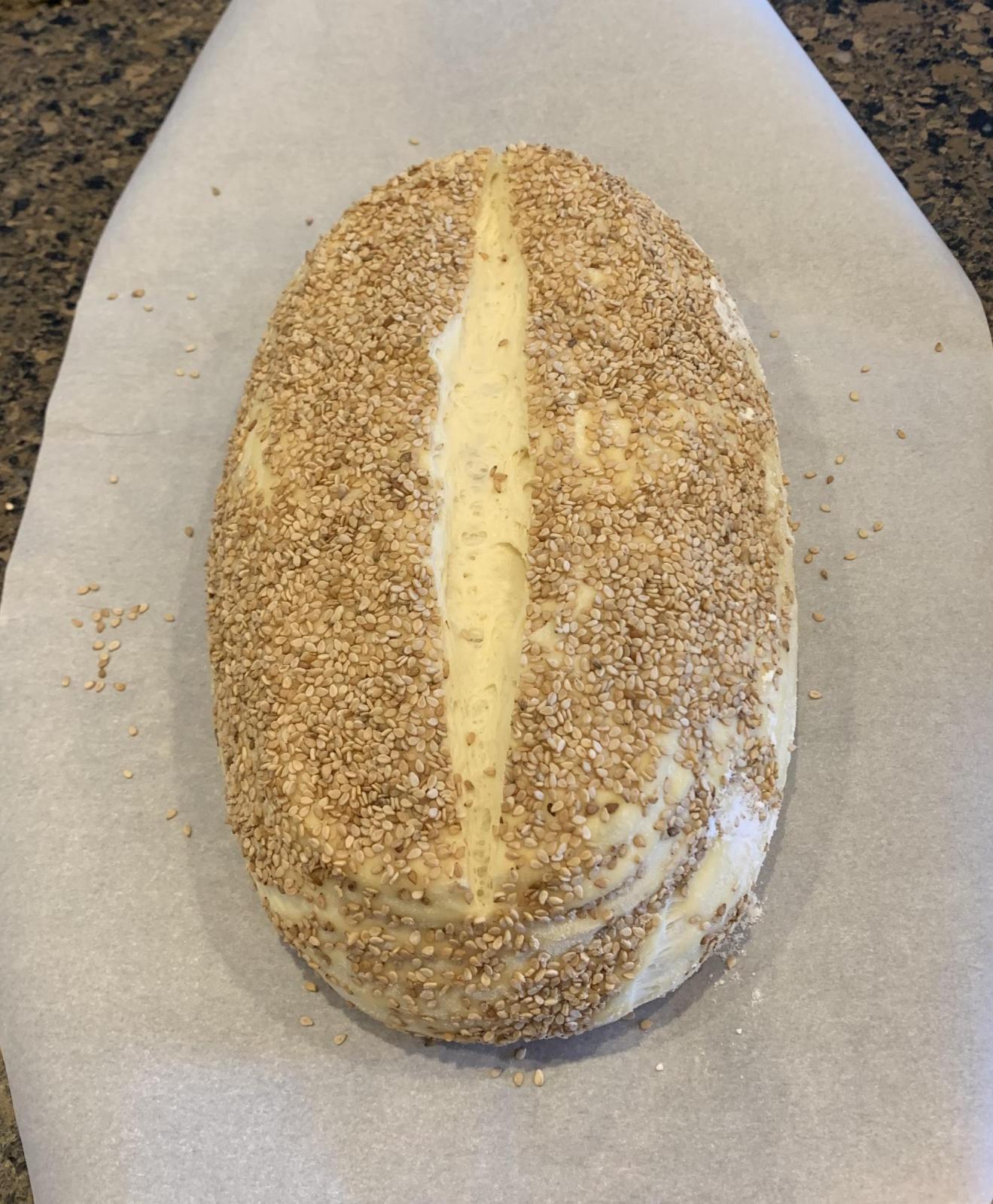 Baked on a stone at 460 deg with steam for 15 minutes.  Used towels in bread pans on both sides of the loaf for steam.  First time trying that, and thought it worked quite well.  However, I think I need to preheat them longer.  Not sure I generated as much steam initially as I do when pouring boiling water in a pre-heated pan.  Had a little bit of oven spring, but the loaf stayed fairly flat.  Looks like there's more oven spring in some parts of the loaf than others.  Guessing that's a shaping problem?  Will have to wait and see what the crumb looks like, but the crust looks good and it smells good too.

I hope to have my SD starter up to par soon and my next attempt will be a SD version. 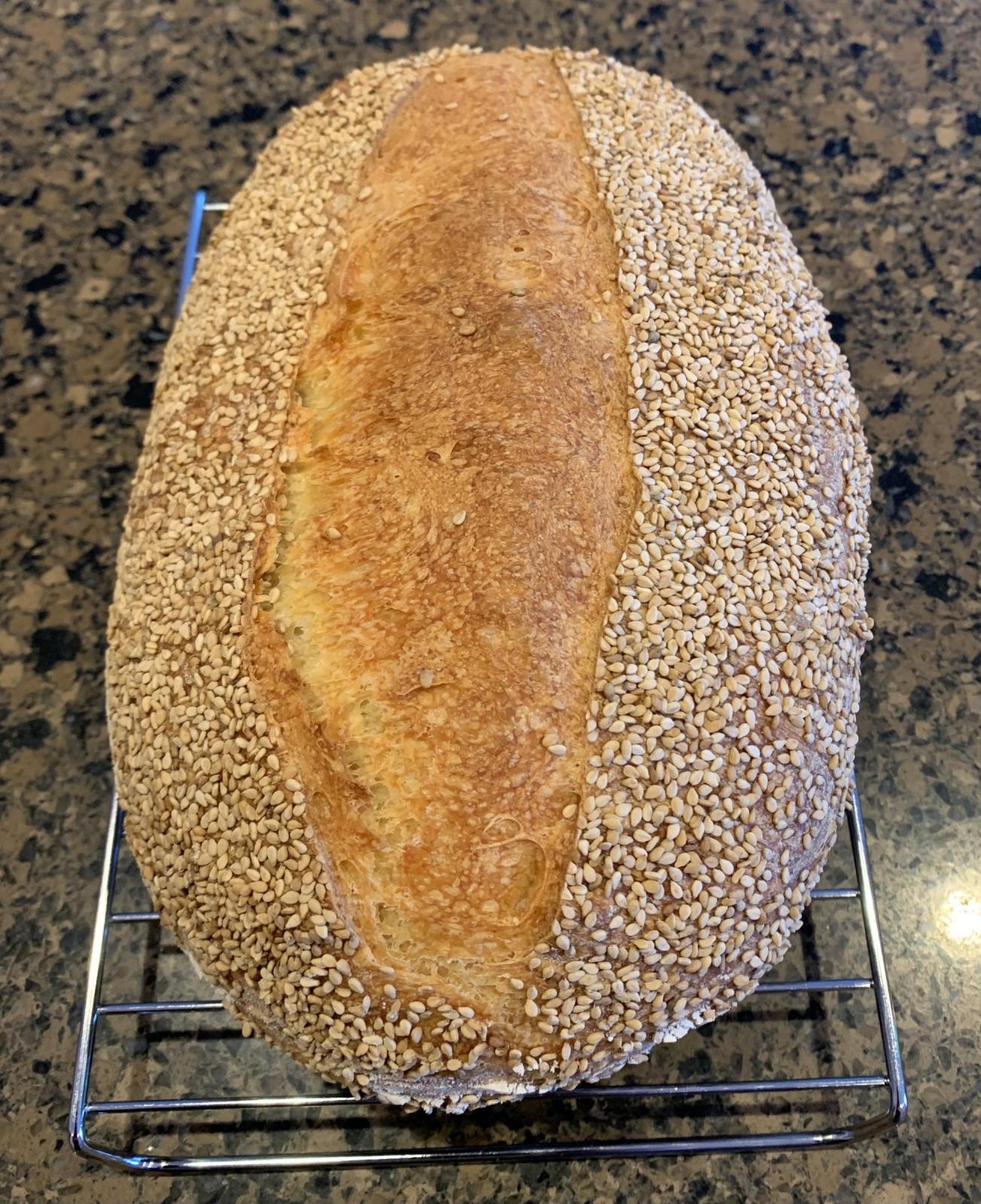 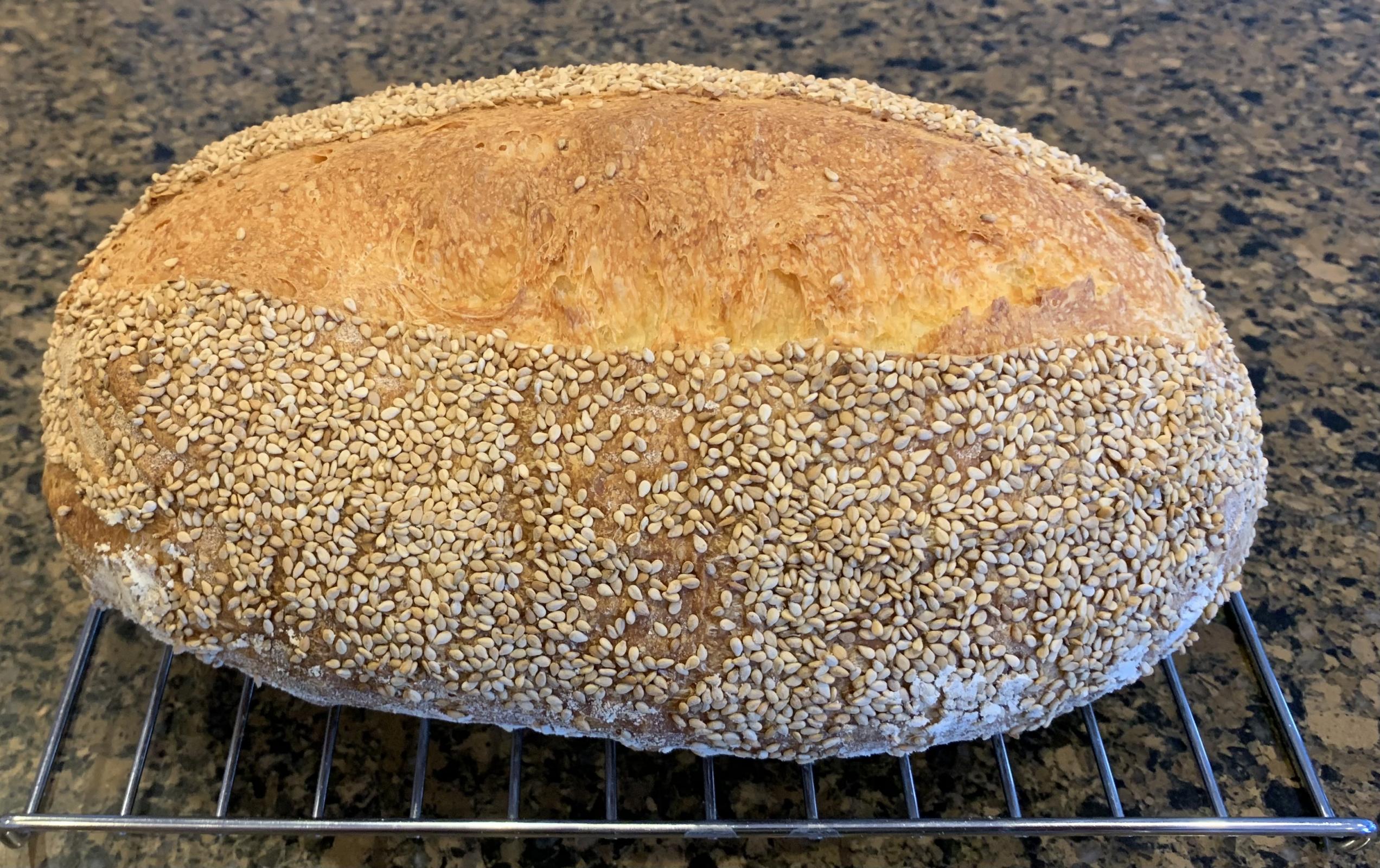 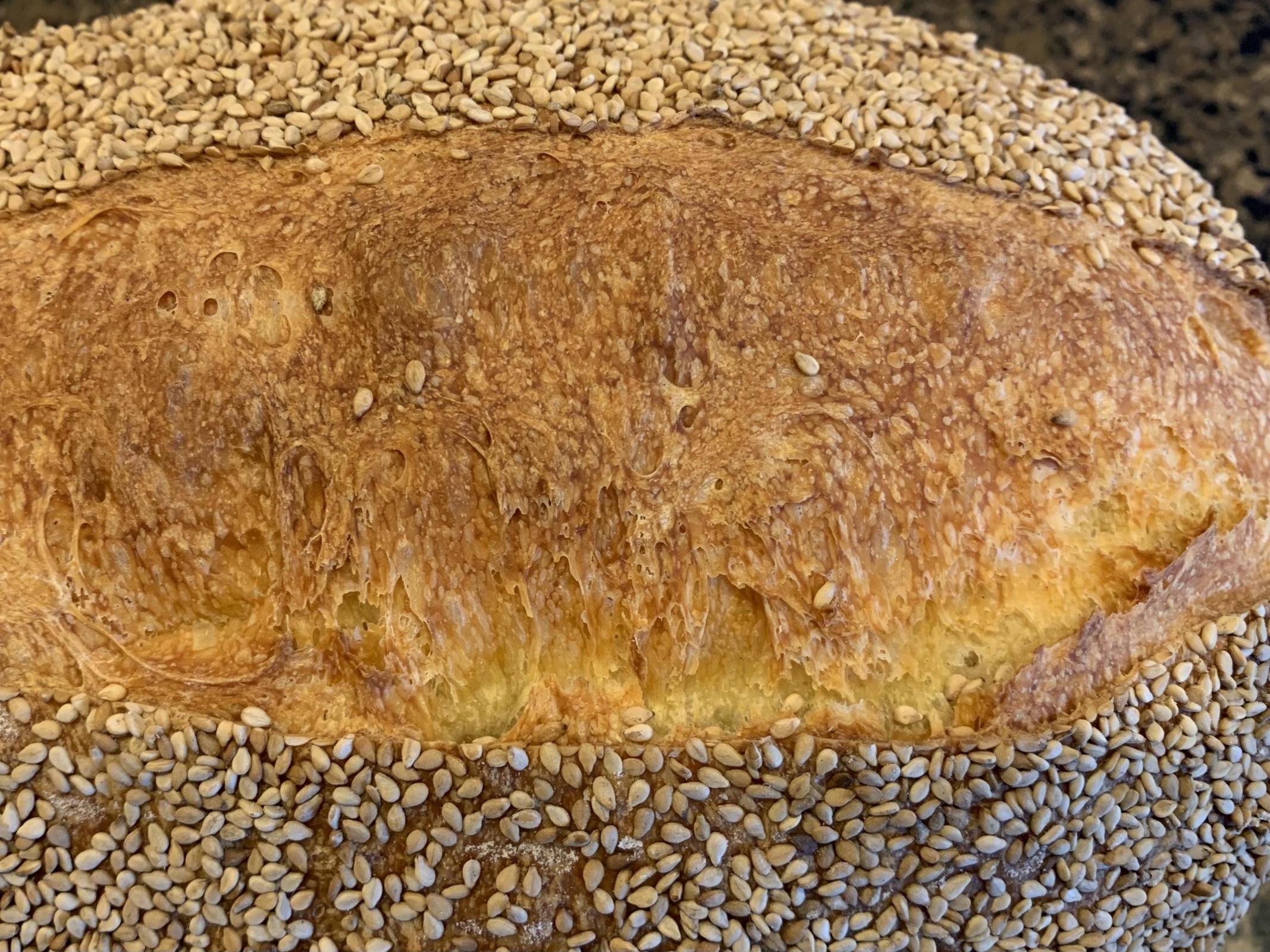 EDIT:  I couldn’t wait any longer after 4 hours of cooling on the counter.  Crumb turned out like I hoped!  The yellow color from the durum flour really comes through with this recipe. 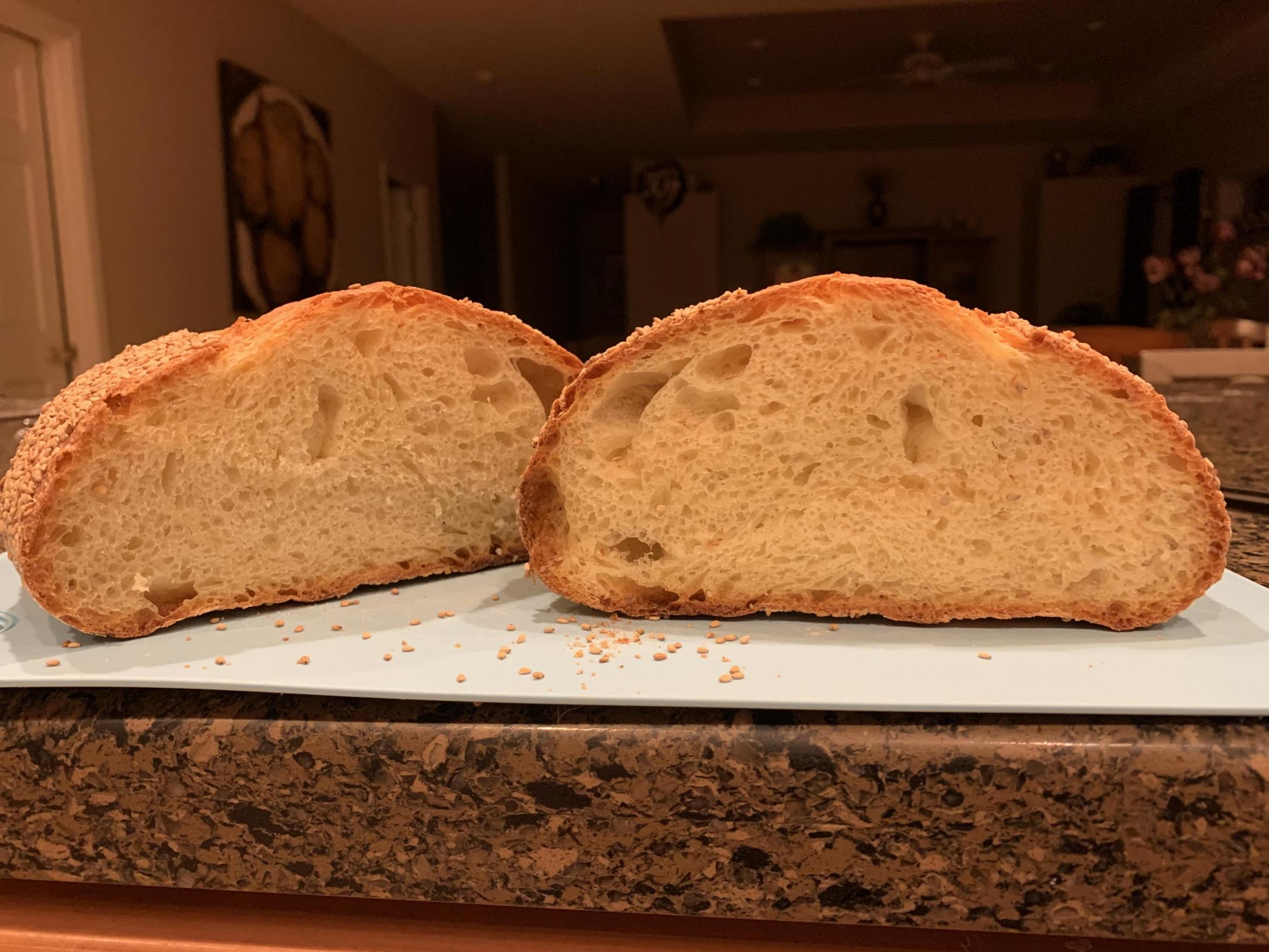 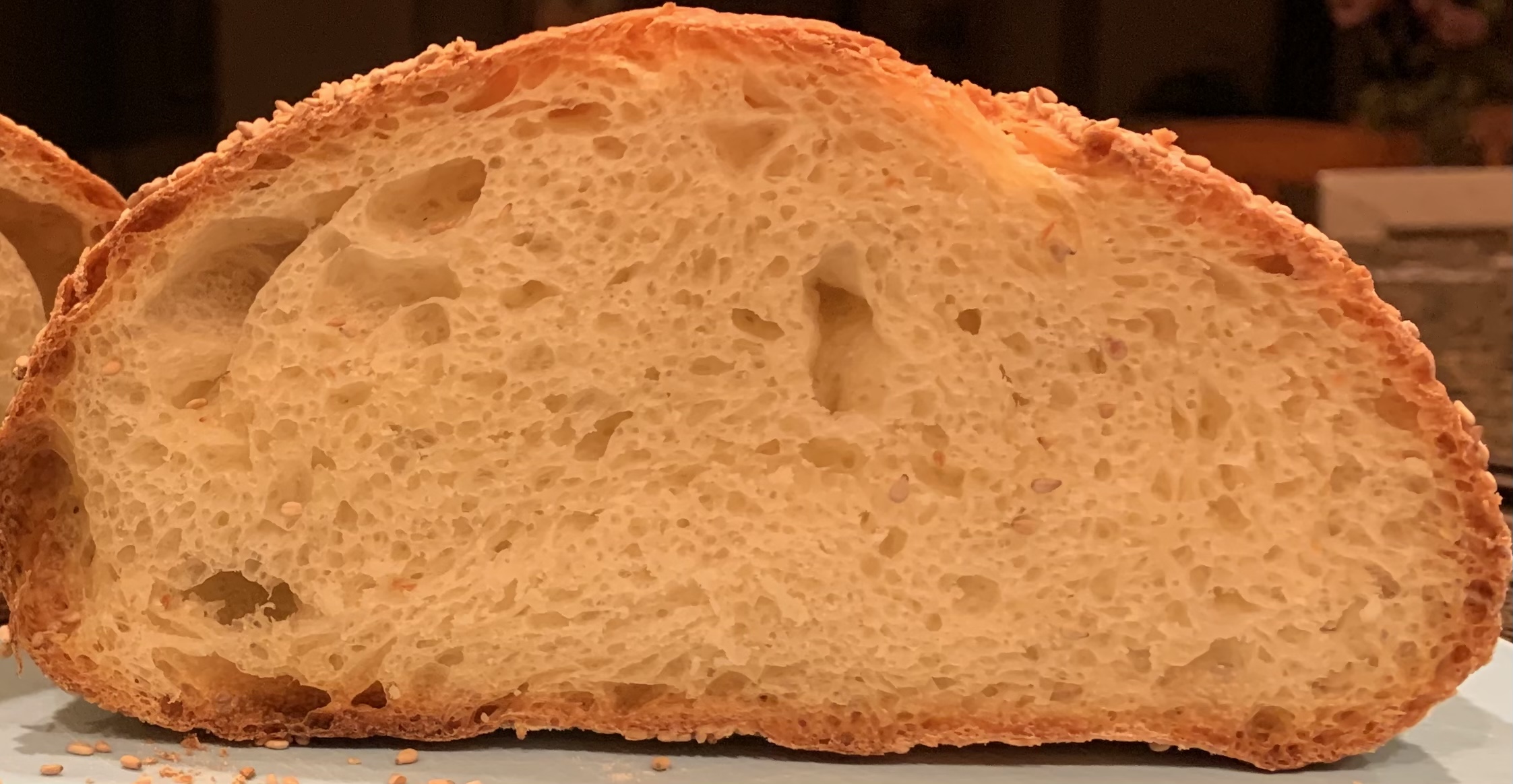 Troy, you are a brave man seeding the outside of your bread as a new baker.  I find that the sesame seeds really do taste a tone better on the crust because you get an amazingly toasted sesame flavour.  But, they are an extra step and I remember the first time I tried to do it I swore I wouldn’t do it again and didn’t for a year LOL.

Your shaping looks great, hard to say that you scored too deeply, but maybe just not on an angle enough.  Aim for about a 30* angle between the surface of the dough and your blade.  You did get a small ear, something it took me many many bakes to get, it is a very good start.

...I can definitely relate on the seeds.  I think what added to the "challenge" was this being the first time I used a banneton.  I had no feel for how much coverage was needed to prevent sticking without flour, so I was pretty meticulous in trying to cover everything.  I was probably a little OCD there, but...  it did plop right out without a bit of sticking.  :-)

Ahhh...  another lesson learned.  I scored it with the blade perpendicular to the loaf.  Will try it at an angle next time.

There are so many little ah ha moments that you’ll have over the course of your sourdough baking, it is quite incredible how much there is to learn if you want to learn it.  By the way, I’m really happy that you’ve taken to joining the CB, they really are a great learning experience.  In 2019 when I was a relative newbie there was a CB with Kristen of FullProofBaking.  In that CB I learned a lot and made a big jump in my baking.

I really hope that other newer bakers join too, I know it can seem intimidating but it really isn’t a competition and we are all there to help one another.

Looking forward to the crumb on your bake.

...very cool that the folks on TFL take their time to organize them.  It has definitely been a good learning experience.  Kind of like drinking from a fire hose right now though, but that’s a good thing!

Crumb was what I was hoping for.  Mostly like a sandwich bread, but with some open areas.

You should be super pumped about the outcome of this bake Troy.  Keep going and consolidate what you’ve learned, you’ve done really well.

Looks terrific, especially with all the seeds – delicious, too!

Thank you much and don't have a verdict yet on the delicious part.  Can't decide if I want to try it as toast with my eggs for breakfast or with some spaghetti for dinner.

The good news:  Bread tastes great!  Made grilled cheese sandwiches with cheddar and a little hard salami for lunch.  My wife said it’s the best loaf I’ve made so far.

The bad news:  She said the sesame seeds were really good on it, so I guess I’m not getting away from putting them on again.  😁

You’ll quickly become adept at it.  The last time I did it I tried a different method that work well enough.  I’ll probably keep experimenting with it, but seeded crusts are worth the trouble in my opinion.