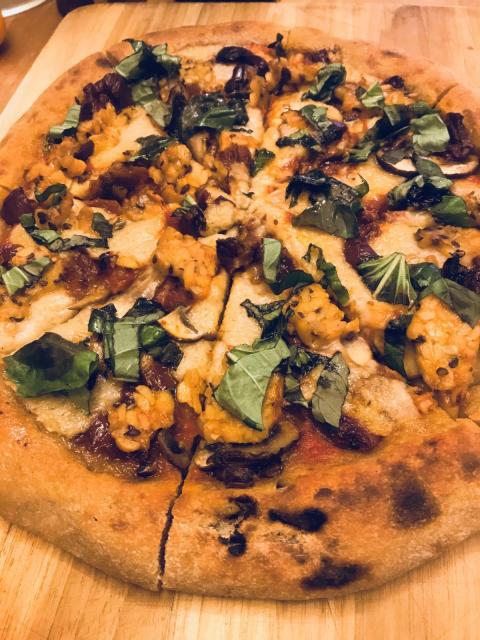 This is my second attempt at the home oven home milled soft white wheat pizza napoletana from Adam Leonti's Flour Lab.  The first attempt was posted here.  This version uses a sourdough starter instead of the yeast called for in the recipe and I increased the hydration from 63% to 70% -- an adjustment based on experience with the first attempt (I would probably take the mean of these next time).  The bran was sifted with a #50 mesh and added to the starter ahead of time.  I made a soaker (water + salt) with the sifted flour and placed it in a wine fridge overnight.

The first version was one of my first open oven bakes using my fibrament stone.  It was good, but the pale crust was a disappointment.  This seems to be a problem with gas ovens, and I purchased a disposable aluminum baker to cover the pizza for the first half of the bake to help trap steam to trigger a maillard reaction.  I baked covered at 550 F on the stone for 7 minutes, then removed the pizza on a baking tray and rotated it carefully in the lower broiler section to take advantage of the exposed upper flame in order to sizzle the toppings and further brown the crust for another 3 to 4 minutes.  It was a big improvement.

The 1000 g flour dough was fermented on the counter until slightly pillowy, then shaped into 4 mini boules, two of which were chilled in the wine fridge for dinner that night, and the other two went in the back of the fridge for the following night.  The difference in flavor and extensibility between the two nights was remarkable.  I enjoyed the first night, and the soft white wheat sweetness was enjoyable but a bit too strong.  It required a fair amount of patience shaping the low gluten soft white wheat on the first night to avoid tearing (there was no throwing this one in the air).  On the second night the longer fermented dough was much more extensible and easy to shape (if a bit sticky), and the additional sour notes from the extended fermentation balanced the sweet flavor of the wheat nicely.  Baking at the lower temperatures a home oven supports provides more opportunity to cook lots of toppings.  These were full meal red sauce pizzas with sun dried tomatoes, kalamata olives, Miyoko's cultured plant based mozzarella cheese, tamari marinated tempeh, portobello mushrooms, and red onions.  Fresh basil was added at the end after the broiler flame sizzling.  The soft white wheat works surprisingly well in this context. 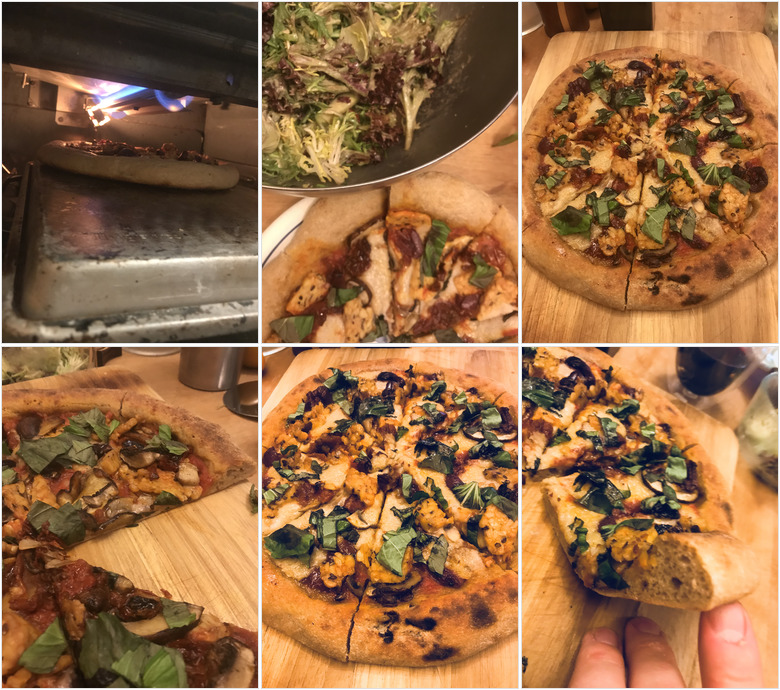