I decided to have a go at the CB  so yesterday went to the supermarket and purchase a 1 kg bag of  Granoro Semola Rimancinata from Italy i paired it with the Caputo Integrale that i had on hand  it was to be a 50/50  contribution . 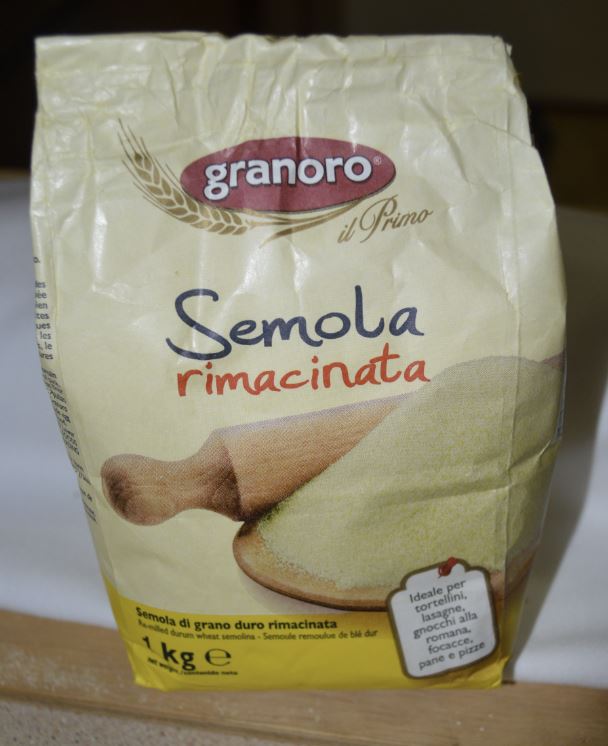 I formulated a recipe that would give me a 750g dough it was my intention to use the Sassafras clay baker for my offering.

This morning i was up early and wanted to use all the water that i had calculated at 65% to hydrate and Autolyse and equal amount of flour which accounted for all the Integrale plus some of the Semola. 1 hour was allowed before and the remaining flour the malt and yeast were then added and stirred through, i was thinking that this was going to be a challenge as i had quite a porridge form , i referred back to my notes and realised i had just added an equal amount of Semola as was added to the Autolyse 65.5g  rather than the 151g that was required, this correction made both the dough and me a lot happier. After the dough formed nicely i allowed a short rest period before adding the salt and olive oil to the mix. it incorporated well  the toasted and cooled Sesame seeds were then rolled into the dough and the finished dough was placed in a bowl to bulk ferment 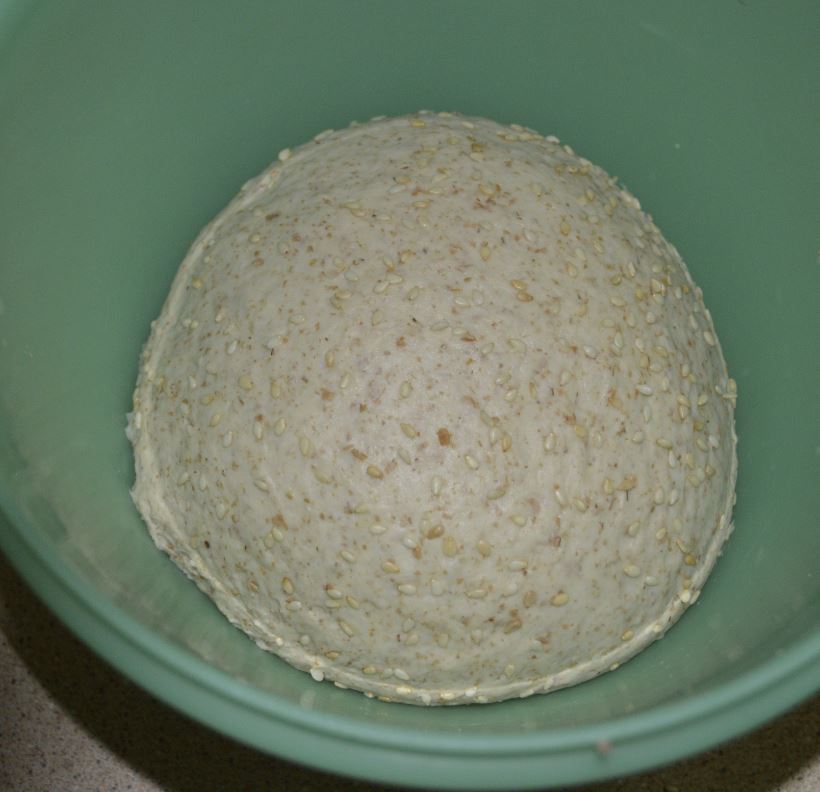 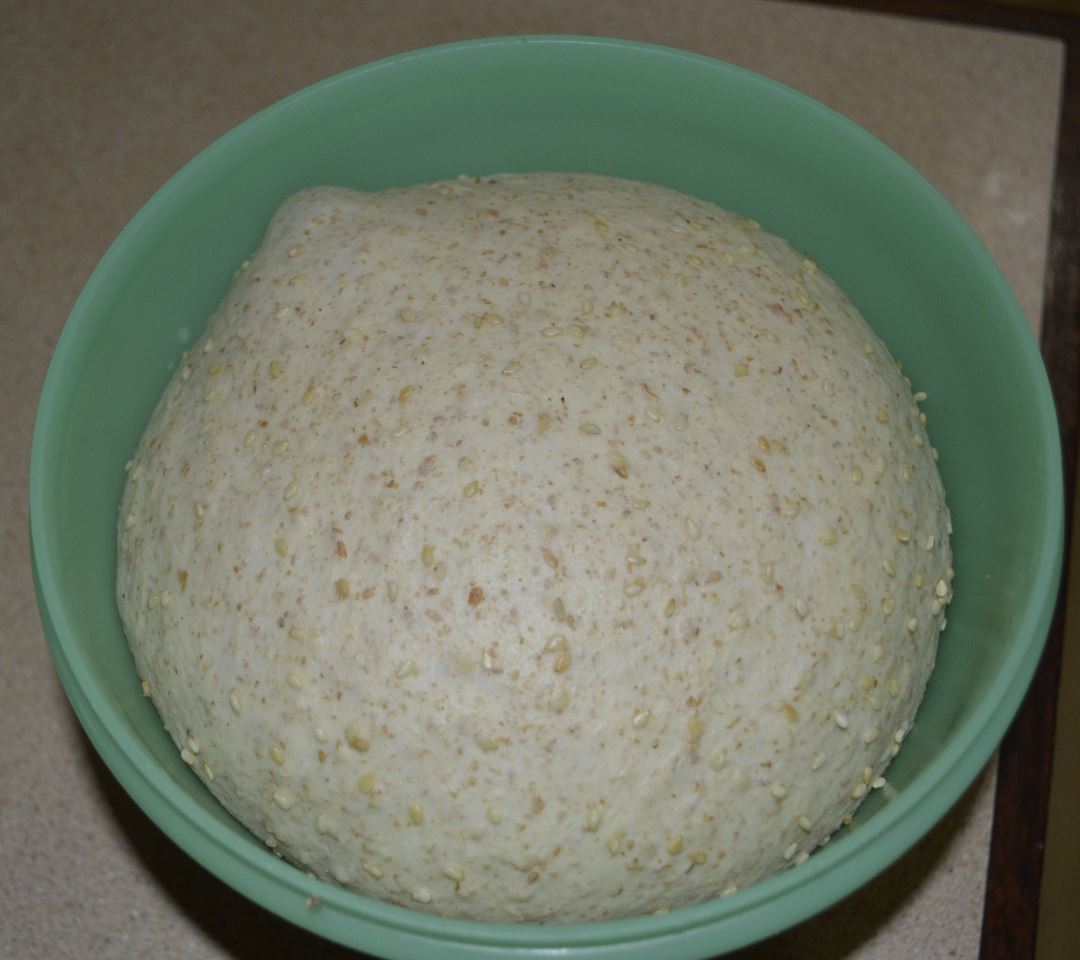 the dough piece was placed on the table linen couche up side down for its final proof.

i should have kept a keener eye on this dough as it had shown it was not a slouch and suprised me somewhat when i unwrapped the couche to find that it was going to be like getting the ugly sisters foot into Cindarella's glass slipper.

i settled for a flat sheet instead and the dough piece just fitted diagonally. It stood up to the transfer from couche to tray quite well so my dilemma of whether to score or not was resolved with affirmative action.

I then had to hurry around and prepare a steam tray and get this into the oven, it wasnt quite up to temperature which isnt usually a problem when working with the Sassafras as it shields the dough piece from the force of the high gas flame at that stage.  the steam tray was withdrawn after 15 minutes and the temperature lowered accordingly. The loaf did take on some colour but i am a fan of the bolder bake

and now as its cooling im getting some cracks

just some slicing to do 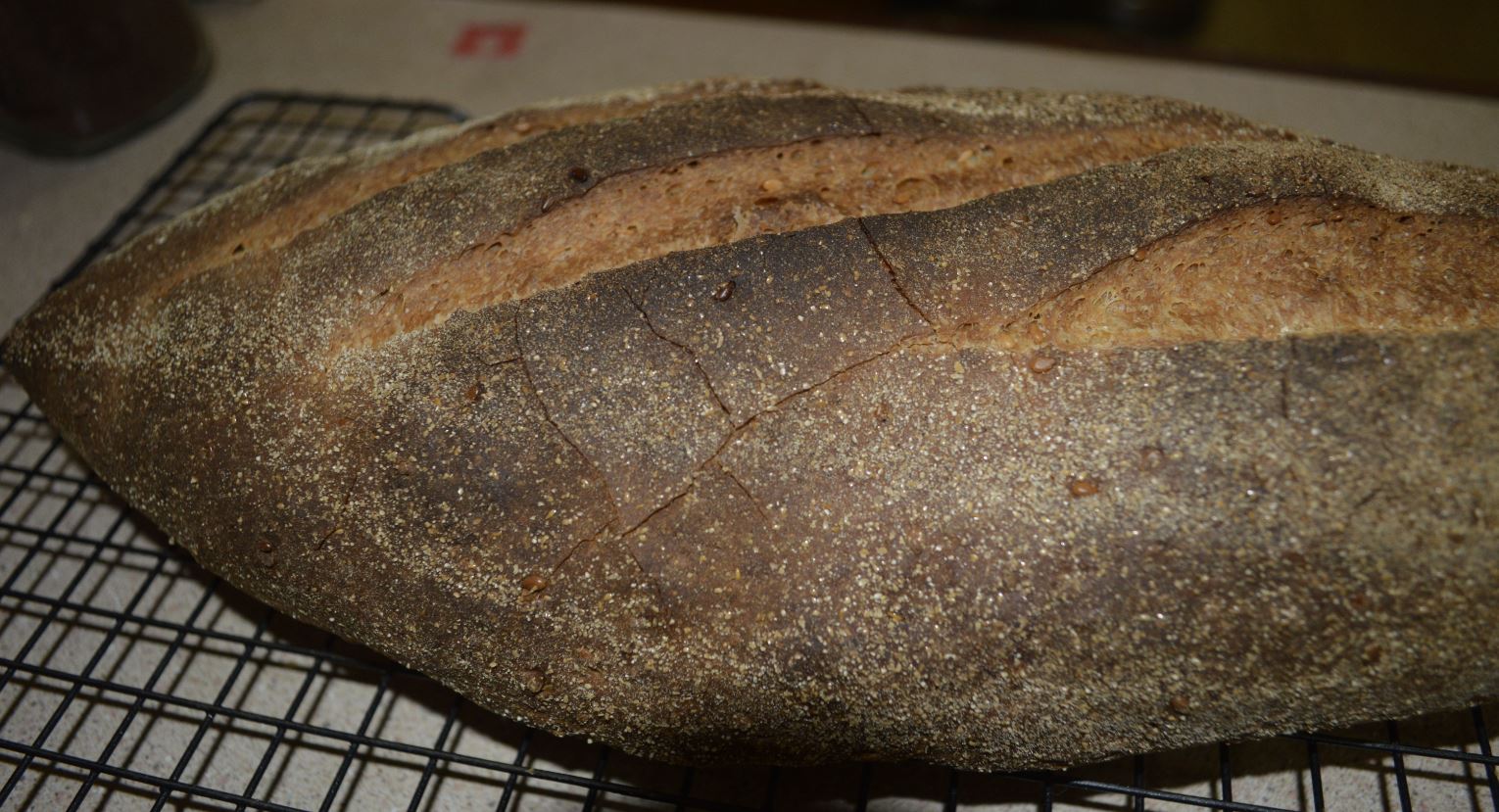 Just some slicing to do and the dough formula 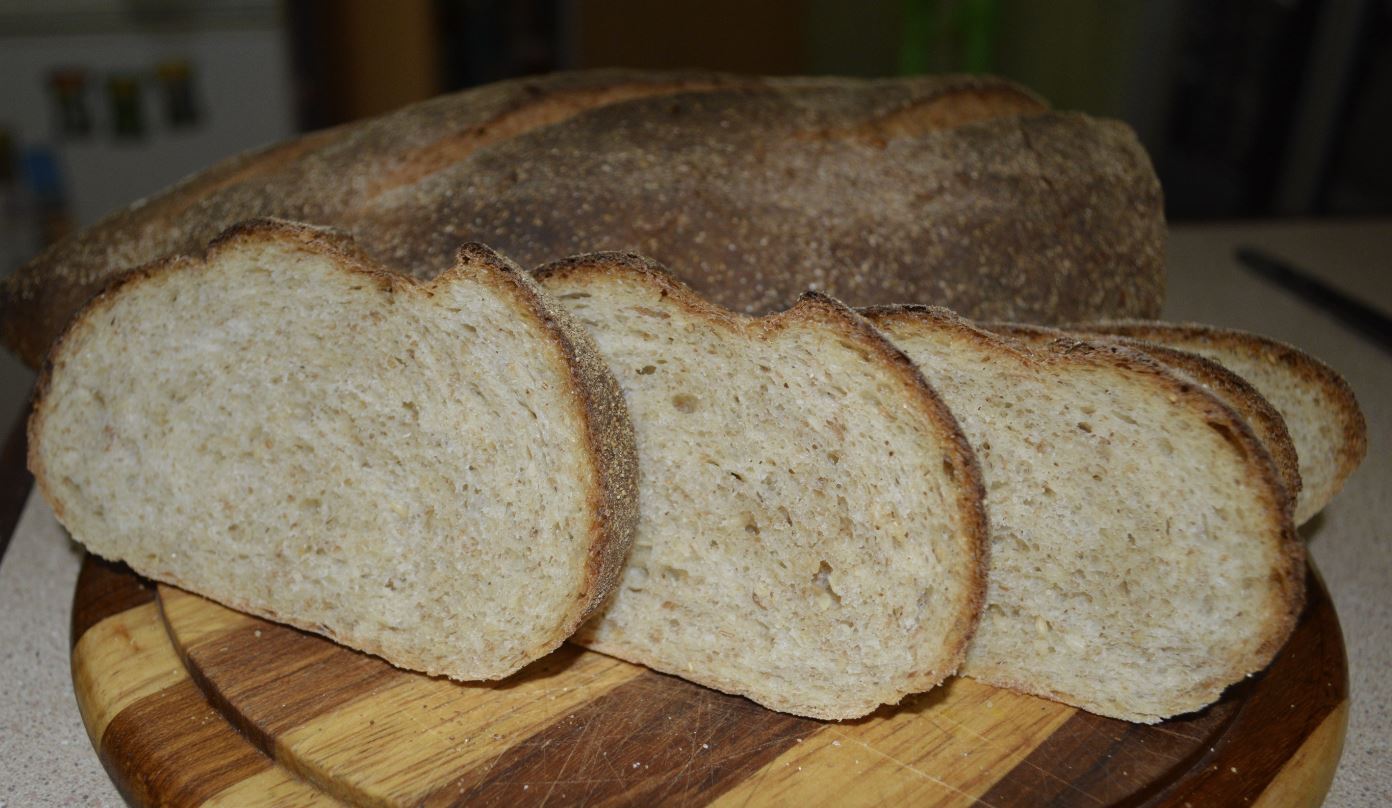 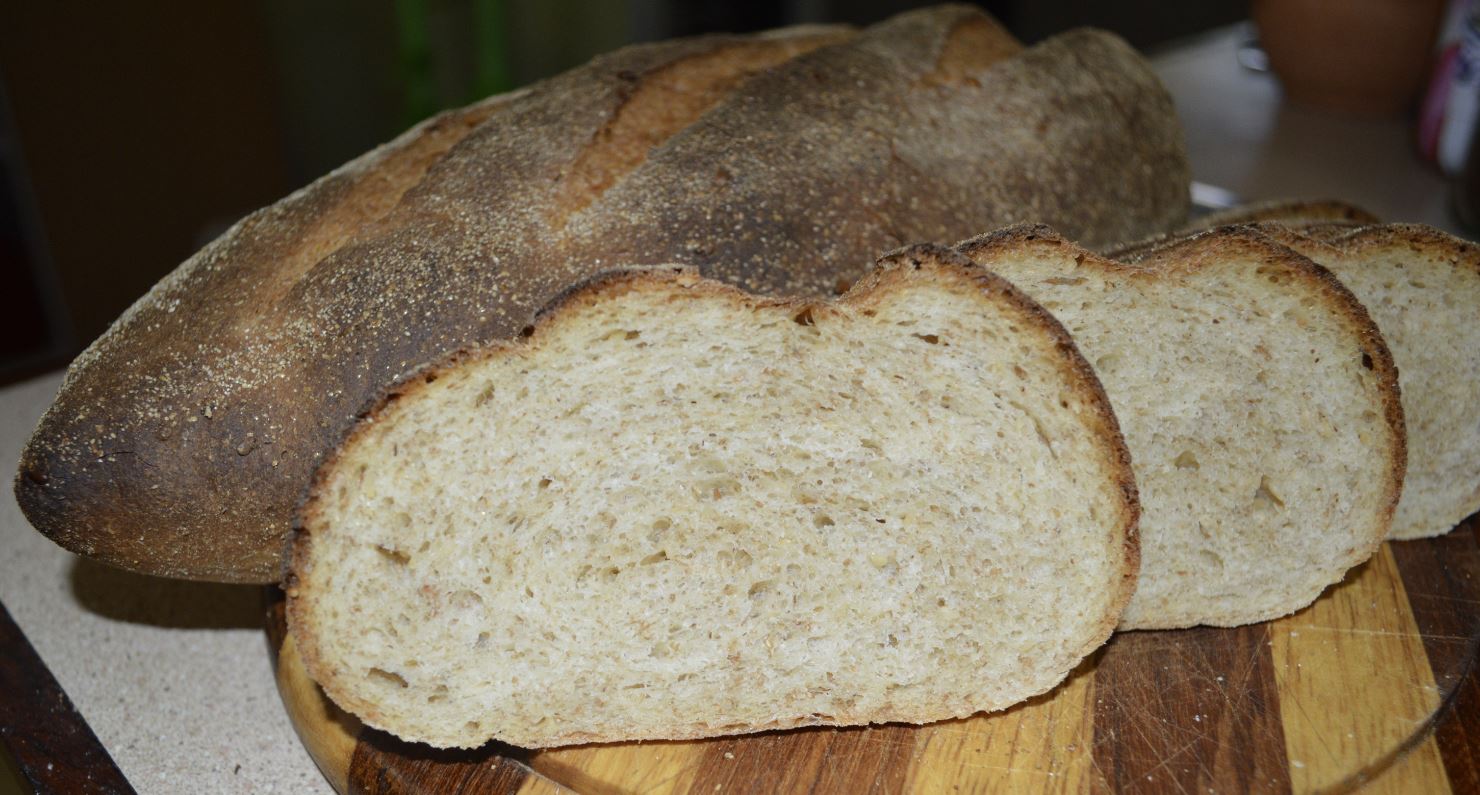 Very nice bake. What I've learned during this CB is some will be baking with semolina in place of durum flour. Totally unexpected and a new revelation. Your loaves look very nice and I like the bolder bake. The crumb looks nice. How would you describe the taste?

Can I suggest you put a link in the CB main thread to your effort here? You would attract some constructive critique much better than mine.

hi gav how do you link it

oh Taste was excellent, the toasted sesame wasn't overpowering and contributes to burst of flavour when biting onto a seed the wholemeal gives a great mouth feel and lingers on the palate. i think i must be reading to many wine bottles!

Deleted. I see you worked it out. Cheers

Derek love the loaf, the crumb looks nice and hearty from the whole grain and sesame seeds and the crust is wonderful with the cracks and depth of colour.  Beautiful bake that must taste great, well done.

H Benny i will probably get time to do another rendition of this CB, perhaps not let it get away from me as much this next time  and i will use WALLABY FLOUR white flour with the SEMOLA Rimacinata

I don't know about you, but I so seldom use commercial yeast it moves so fast it easily gets away from you.  Sourdough is easier in that sense if you are multitasking and doing other things.

Well you just need to use less of it Benny and the time is extended, it can be quite predictable. i am already thinking of halving the amount to 1%  for the next rendition which should double the BF time. i usually score at 3/4 proof too when using fresh yeast.

Yes of course like with the Bouabsa baguettes where it is only 0.16% of the formula.

I just want to bite into that crust. Looks delicious!

Thanks AG the crust was a great feature and didn't disappoint when that urge to sink the teeth into it was unleashed, the good spread of butter  made the second slice obligatory.

Great bake Derek.  Must have tasted as good as it looks.

Thanks Ian, its all gone now and was very good tasting all you hope for when you present it to someone and you want to knock their socks off!

I really like your crumb! That's what I would be looking for in my breads. Nicely fermented without a lot of daylight shining through my slices. The crust will follow.

Did you plan it that way or does the crumb naturally follow from the recipe and process? I guess I'm asking is did you get what you expected?

Hi Murlh it was pretty much how i hoped it would turn out, it was mixed by hand on the bench top  i had recently used the Caputo Integrale so was  pretty much knowing its  capability i used it in the Dark rye stout loaf that i did for the Rye CB https://www.thefreshloaf.com/node/66572/caputo-integrale-dark-rye-and-stout   and was really pleased with its performance there. The only unknown was the Semola Rimincinata, i hadn't used that for a long time.but figured 50% should be a good amount. The use of compressed fresh yeast and a fairly straight forward conventional bulk fermentation  and degassing the dough at the end of that period followed by a 10 minute rest and recovery before shaping allows for a fairly tight mould. As discussed with Benny i probably could have halved the amount of yeast an had a longer BF which may well have upped the flavour.  We have been experiencing some very hot weather here in Perth Western Australia with temps of 35C and over  so i think that has contibuted to the overall speed of this bake compared to the second rendition where i was a bit more vigilant and watchfull .