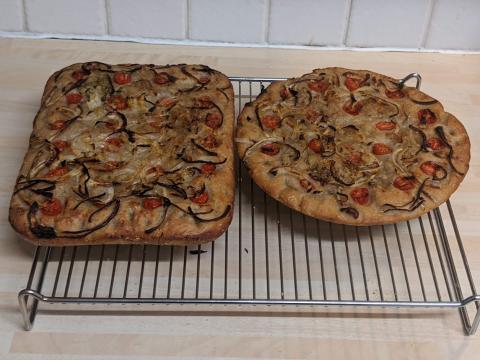 Had a craving for focaccia, realized I haven't made it since August. Just like last time, I simply followed Maurizio's recipe with minor time adjustments. I think my flour is a bit thirstier than his blend of AP and bread flour, so after some Rubaud mixing, slap&folds and stretch&folds was lovely and strong, could have made just a loaf of bread with it I think if I wanted to.

I split the dough over two heavily oiled glass trays (well, one was the lid of a pyrex casserole dish that also works instead of a dutch oven when I bake just one loaf), since I didn't want a very thick and fluffy focaccia, but rather a thinner, more traditional Italian style. After a few hours proofing until they were bubbling a lot on top, I topped them. First, I splashed some salted water and dimpled them. Then topped with sliced baby plum tomatoes and a finely sliced onion. Also chopped a little of fresh rosemary, mixed with dried thyme and oregano, mixed with olive oil and splashed it on top. And added some more olive oil, sea salt and some parmesan grated on a microplane. And more olive oil. It was a lot of olive oil! But that's the key to a good focaccia, and our Kalamata EVOO is delicious.

The round focaccia turned out a little thinner, and that's the one I cut first. It's super crispy on the outside, but soft inside. Just what I wanted. I think I cut the onion a bit too thin, so it charred a bit too much, but when eaten together with the whole slice of focaccia it doesn't taste bitter, so all good. The round one disappeared quickly tonight for dinner, between me and my girlfriend! 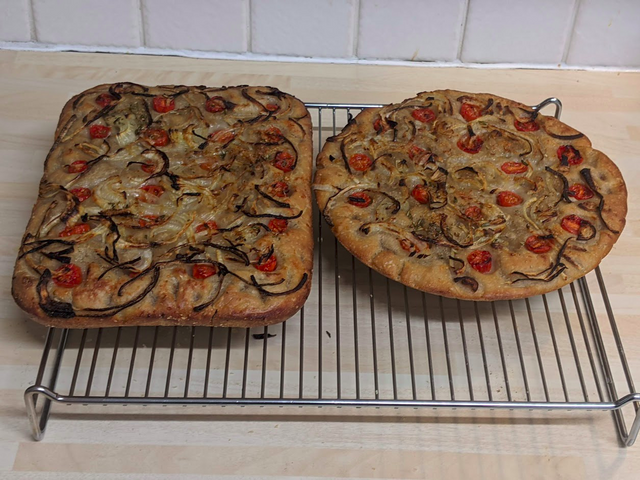 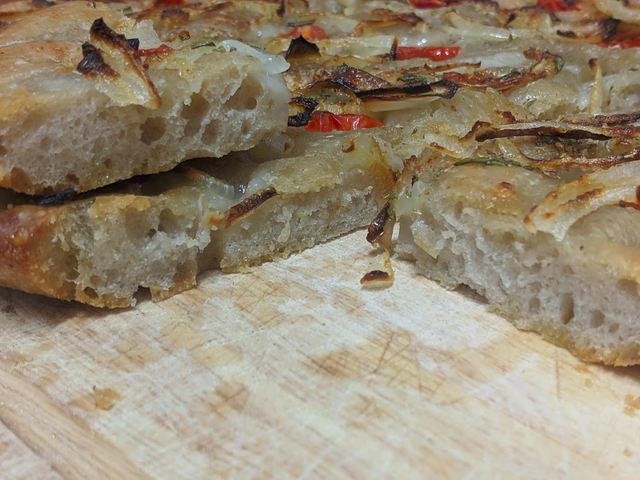 They look mouth-watering. I love focaccia and those topping are great. Nice work.

Here is a crumb shot from the slightly thicker rectangular focaccia 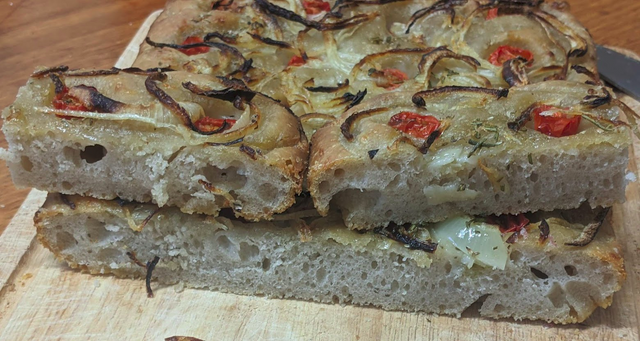 They both look so delicious Ilya, beautiful focaccia, I like your choice of toppings. Making two from Maurizio’s recipe seems like a good idea, the thick focaccia I made from his recipe was too thick.

Yeah, if I had more things at home, I could have used different toppings on the two too - but literally there was nothing else I could use 😂

After seeing yours I'm very tempted to try it myself. Looks delicious, Ilya.

Thank you Abe! It's a very easy bread to make, but delicious: no shaping, no steam needed - just need to use good quality EVOO, and a lot of it. Especially without a non-stick pan. In my experience glass works better than a metal tray, but still this time the rectangular one got slightly stuck - that's the only potential issue really.