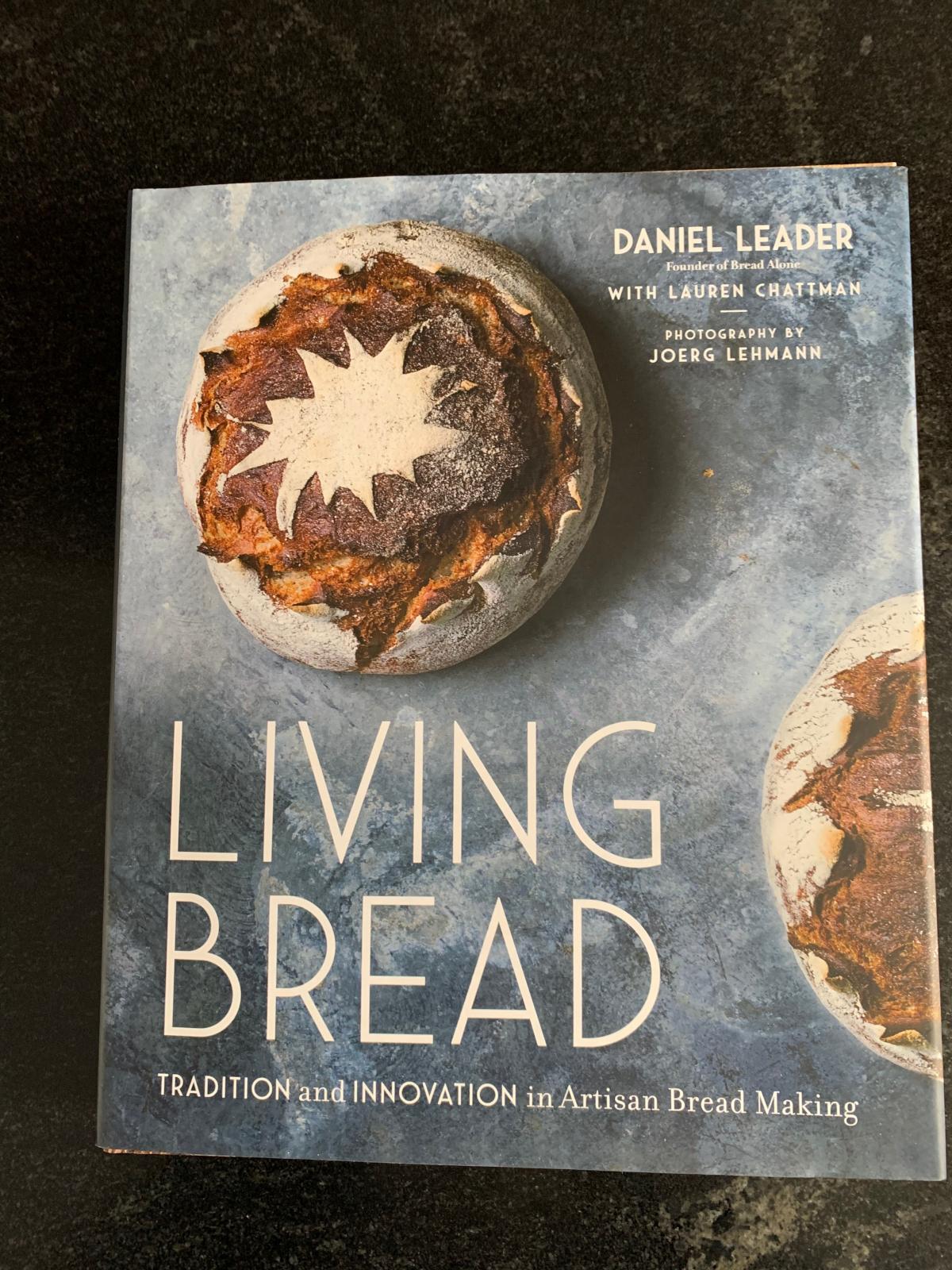 I received a copy of Daniel Leader's Living Bread for Christmas this year.  While it contains 50-plus formulae for breads, Leader seems more focused on the stories of the grains, the growers, the millers, and the bakers he encountered in Europe.  That's all good and makes for an engaging read, since he is obviously passionate about his subjects.  I would, however, strongly recommend you obtain a copy from your local library to read before deciding whether to purchase the book.

My impression, having read the entire book and baked one of the breads, is that this is a book that I will not bake from frequently.  Much of that comes down to the ingredients in the breads.  While it is becoming easier to source European flours here in the U.S., there are some very specific flours that Leader highlights which will be very expensive for North American bakers.  (Note that Leader does provide sources for these flours in the last chapter of the book.)

The book is organized as follows:

Leader does a decent job of describing how various grains have emerged, been abandoned, and are enjoying a resurgence as growers and millers rediscover the qualities they possess.  Milling techniques, particularly stone grinding and roller milling, are discussed.  He also spends some time talking about how flours are characterized in different countries and the different bases for grading flours.  All of this is good to know, both as general background information and as specific-to-a-formula information.

When he gets to the bread formulae, Leader does a couple of things that I really appreciate.  First, all ingredients are shown with their Baker's % and their metric weight.  That's all.  No avoirdupois weights, no volumes.  Right off the bat, that eliminates a lot of possibility for the errors that plagued his Local Breads book.  The second thing Leader provides with each formula is a dial and table that list the estimated times for each stage of the bread.  An example is shown below on the left side of the page: 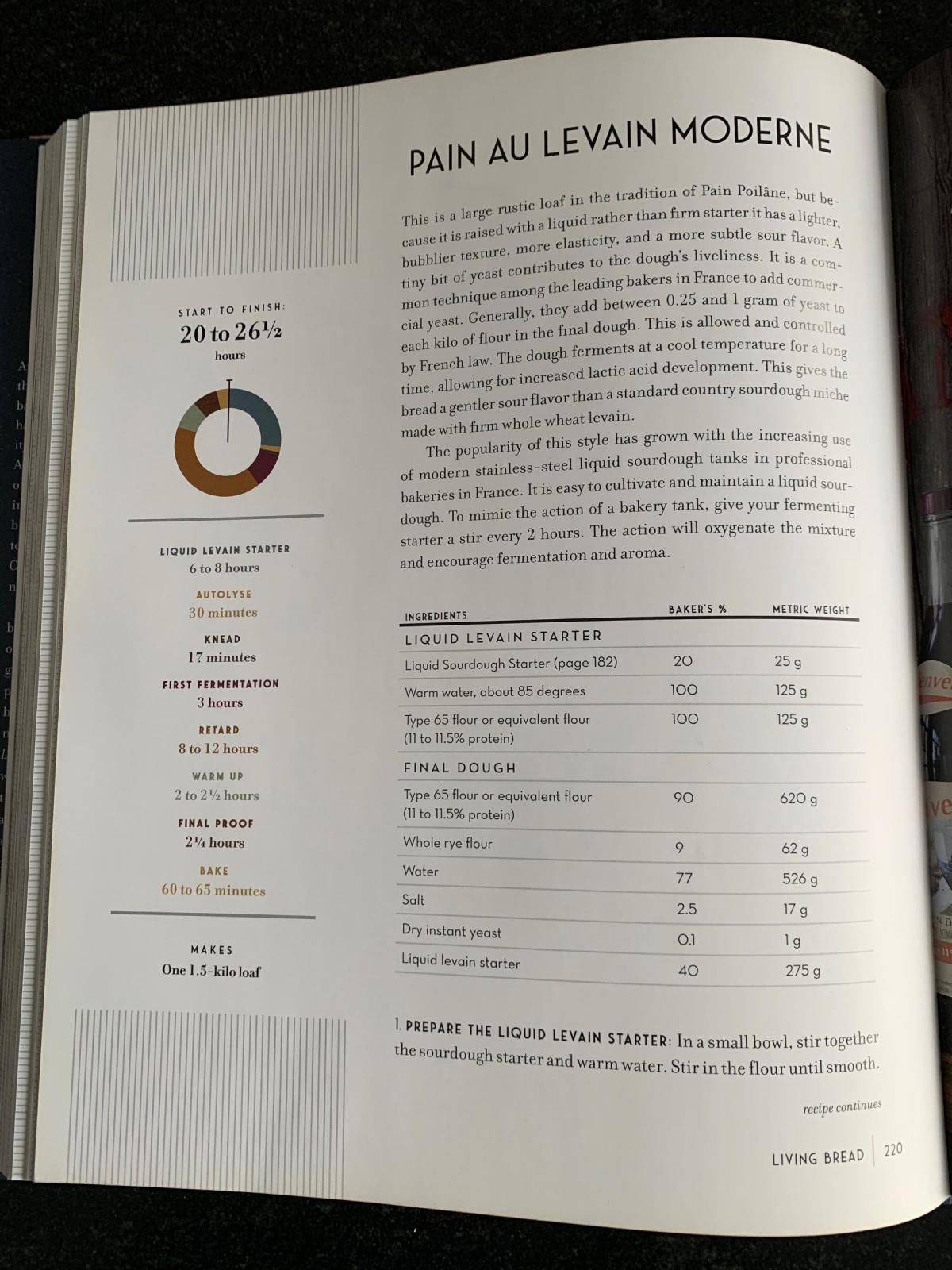 I think this is a praise-worthy inclusion since it provides the baker with an at-a-glance understanding of the probable timetable for making the bread.

A number of the formulae end with a "Note for Professional Bakers" that gives them a heads-up for anything in the formula that Leader believes could be a concern in a production environment.  Those are helpful for the home baker, too, though the smaller batches we make are less likely to encounter the issues that might occur in larger batches.

I haven't examined the formulae closely enough to see whether errata will be a problem.  There appear to be some copy-paste chunks of text that could lead to some of the problems that were seen in Local Breads.  For example, the formula pictured above talks about shaping the bread into a boule and baking it in a Dutch oven, using wording that is nearly identical in other formulae.  However, the photograph that accompanies the formula shows a batard shape.  Go figure.  Directions for steaming the breads that are baked on a stone always mention putting ice cubes in a preheated cast-iron skillet.  That isn't necessarily a problem but there are more effective methods for steaming a home oven.  While I think that the editing and proof-reading for this book may be better than for prior books, it will be interesting to see what emerges as more people bake from the book.

Bottom line: I'm happy to have the book although, as I said earlier, I doubt that I will bake from it very often.  There are a handful of breads that I want to try and it is possible that some of them might enter the regular baking rotation.  I appreciate Leader bringing my attention to some of the European flours, millers, and bakers that I hadn't know of previously.  He obviously cares a great deal about bread and the people who make it, and that shines through the text.

I also own this book and, like Paul, I haven't baked from it very frequently. I am not really concerned about obscure flours - if you want to bake niche Italian breads authentically, for example, then you might need to source some hard to find flours or at least work out how to substitute them when possible.

I am more concerned that a lot of the recipes, including the sourdough ones, seem to include a hefty dose of IDY, possibly as an insurance policy for beginner bakers. I did query this with Mr. Leader, but have not got an explanation yet.

Nevertheless, thank you for your review Paul - you have reminded to pick up the book again and give it another chance!

I like the intro and all the non recipe parts. I haven’t found the recipes interesting enough to try even one yet. Bummer but I also didn’t really buy it for the recipes.