The holidays are playing all kinds of tricks with my baking schedule and thinking, so here is another salvaged near-flop.

My girlfriend's brother has been staying with us over the holidays, and when he was leaving yesterday I wanted to gift him a loaf of bread to take with him. But of course I didn't manage to plan it properly, and only could set up the very simple sourdough dough the night before, and spend minimal amount of hands-on time on it yesterday during the day.

I mixed a dough with 25% spelt, 10% extra strong whole wheat and 5% rye (rest BF), and 73% hydration, plus probably a few more percent from wetting hands during kneading (slap&folds): https://fgbc.dk/15p9. So I developed the gluten to a good degree, and left to ferment overnight (11 hours). Potentially important point is that I used 100% hydration rye starter from the fridge, not a stiff starter as in the recipe (since that's what I had). And more importantly, I used my "proofer", and I think I still need to play with the setup, since it appears the heating pad was on all night - and the dough overfermented! Especially at the bottom of the mixing bowl, where the heat is coming from, it was much more sticky than usual, and a lot of it was stuck to the bowl when I inverted it to remove the dough. And I got a very big rise, and I even had a feeling maybe it had peaked and started falling by morning. I'd never had dough overproof significantly in bulk like this, so it was a goo learning experience.

I tried shaping it, and while it was not a complete disaster at first, the gluten membrane on the outside was tearing very easily, and I couldn't make a tight boule or batard. So I decided to follow the common advice, to just dump the dough into loaf pans. I managed to shape one of them into batard-y roll, but the other one was impossible to work with, and just went into the pan as an unshaped mass of dough. I sprinkled sesame seeds on top, even if the bread is not great they are guaranteed to come out delicious. I then tried to proof it for a bit, but didn't see a significant rise. But by then it was time to go out for a walk to meet a friend, so I couldn't bake it and put them in the fridge, where they stayed a few hours, and I don't think it rose more than half a centimeter overall. I then scored it and baked it from cold (again, pressed for time I didn't even preheat the oven fully), and was pleasantly surprised by pretty good oven spring.

I lost track which one was shaped relatively well, and which was a complete mess when went into the pan, but they looked very similar in the end (I thought having a "skin" on the surface was beneficial for the crust, but it doesn't appear so!). I kept one of the loafs, and tasted it this morning. 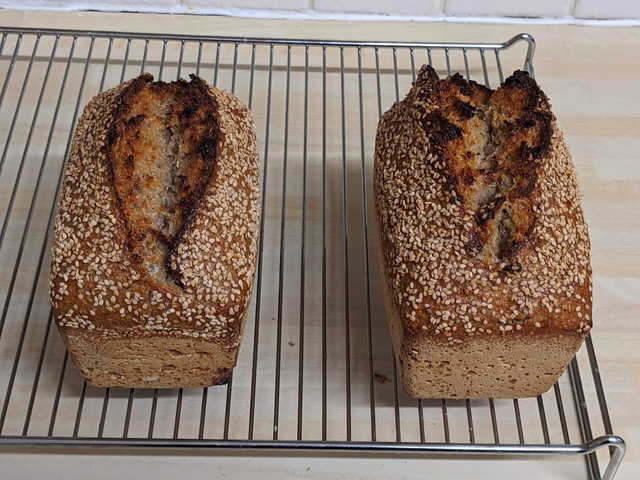 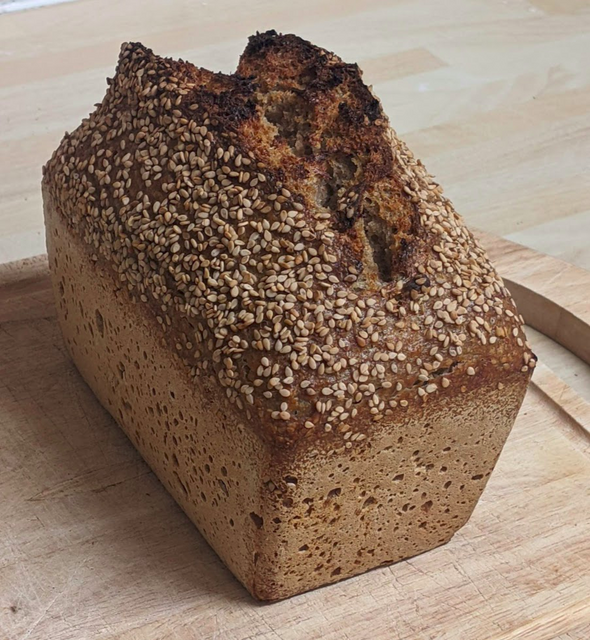 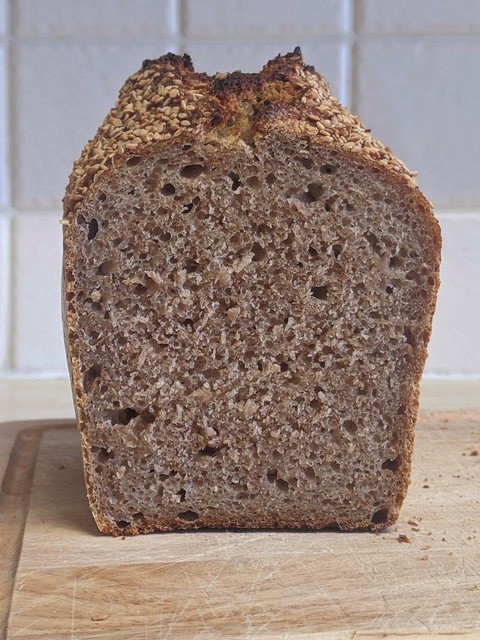 Probably unsurprisingly, this is the most sour bread I've ever made! I still like it, but would prefer less acidity.

With the spelt, rye and heating pad this would have all contributed to over fermenting. I think it's best with long ferments to err on too cool, and wait longer if need be, than too warm. Strong flours also work best. All the same it looks good and hope your gf's brother appreciates a tangy loaf.

Thanks Abe! With the heating pad I just wanted to make sure it didn't get too cold during the night, since I wanted the dough to be ready to shape and ideally bake in the morning before we headed out, but still need to optimize the heating setup. Need to insulate the whole box better, and insulate the dough from the pad itself too.

He hasn't tried it yet, but I hope he likes it.

I like that you went ahead at each step to the bake. Just shows that the learning continues through to the tasting. I would eat these; the end result looks good.

Thanks Gavin! If you like sour bread, they would be perfect! A little dense perhaps, especially around the edges - I degassed them quite well while trying to shape them, and they didn't grow much during proof.

There was no reason to stop since the dough was mixed anyway - I wouldn't lose anything from finishing them, apart from a little time, even if they turned out terrible in the end - which they didn't.

Ilya, they both turned out so well considering your challenges and time issues.  They look delicious and I’m sure your girlfriend’s brother will enjoy his.

Thanks Benny! He said he tried some in a toastie and liked it - although commented that it was a bit dense :)

Both look great inside out. I love sour bread with peanut butter. Would like to have a taste!

Is Russian your mother tongue?

Thank you! Didn't occur to me to try this with peanut butter, and the last slices were gone this morning. Sounds like a good combo, with some honey on top too perhaps?

Yes, Russian is my mother tongue.