Santa and his helper (our daughter) delivered gen 1 of what I fear might be a Not Ready for Prime Time Appliance. Does anybody have one of these Anova Precision Ovens and, if so, could you share some tips on its use?

I was anxious to give it a test drive but had 50 things to do yesterday so I mixed a Forkish Saturday White Bread scaled down to 700g. Not sourdough, but the process and hydration are similar and, since the the timing fit fit my schedule, I went for it.

The directions on the Anova website say to bake any sourdough recipe of your choice at 482°F with 100% steam for 20 minutes, at which point you should open the oven door to vent the steam, reduce the temp to 401°F and continue baking until done. Forkish calls for an oven temp of 475°F throughout the bake, so I set the oven to 475°F and set the timer for 20 minutes to remind me to turn off the steam. In 10 minutes, I looked through the oven window only to see a risen loaf with a browned crust. I turned off the steam immediately and let it continue baking. When the timer sounded at the 20 minute mark, the bread looked fully baked. I was skeptical and checked the internal temp at five places. All five readings were 207°F or 208°F so I took it out. The crust looked just as I hoped – shiny, thin and blistered – and I couldn’t believe it baked through in just 20 minutes.

After maybe 30 minutes of cooling, the crust lost its crackle and became rather soft. Huge disappointment. My thought is that this might be an effect of exposure to steam after the crust was set. Next time I will watch the bake and turn off the steam when I notice the first signs of browning. The crumb was quite moist and soft. Here is a close-up of crust and crumb: 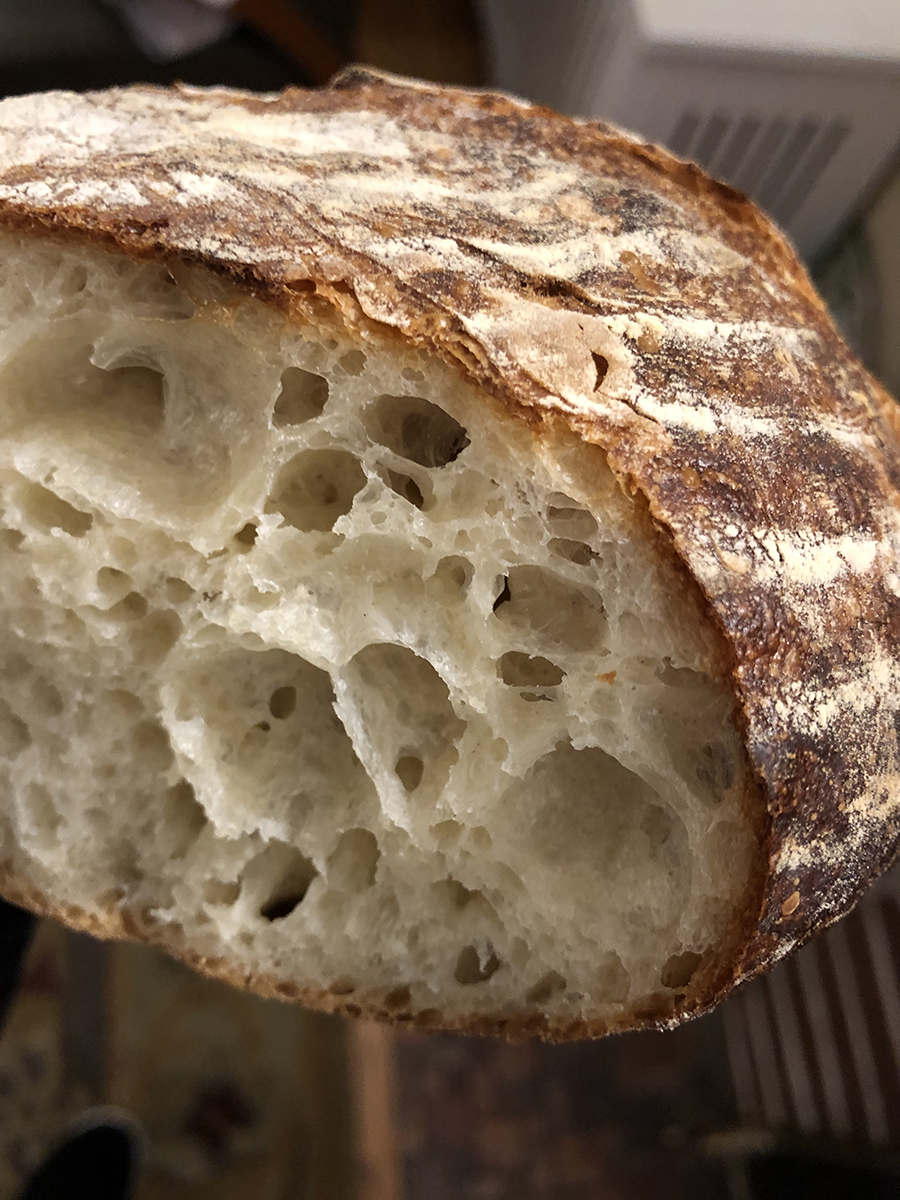 There were some oddities about the oven’s performance, such as the temp display fluctuating well above the set point. Not as much fluctuation as you’d expect with a conventional oven, but this thing is supposed to maintain temp within 0.5°F when set in the sous vide mode and it wan’t even close to meeting that standard. (I attempted to use the oven as a proofing chamber using the sous vide mode at 80°F.) The oven turns off when I try to start the timer after pre-heating, but maybe I’m supposed to set the timer before the pre-heat. (Suffice to say, the instructions are lacking.) I’m not sure if I got a lemon or if these are just idiosyncrasies of the oven. Or user error. I’d love to hear the impressions of anyone else who owns one of these ovens.

Baguettes based on, Jeffrey Hamelman's...
Butter Cracking
Greetings from Tux, Austria
What type of fineness should be expected?
Frisian Black Bread TRB
END_OF_DOCUMENT_TOKEN_TO_BE_REPLACED