I don't remember ever trying stollen, but in the end I decided to bake a couple of them for Christmas this year - since proper pannetone seemed too challenging! And for a special occasion I went the extra mileL candied the orange (and a bit of grapefruit) peel, and made marzipan (for the first time) myself. Both things are surprisingly easy (although this time I forgot to reduce the heat for the peel during 1 hr boil time in syrup, and some of it got burnt on the bottom a bit). And I simply followed foodgeek's recipe for the stollen: https://foodgeek.dk/en/sourdough-stollen-recipe/

Made a sweet levain with milk and a bit of sugar overnight (reduced inoculation relative to his recipe), and soaked dried cranberries, raisins and currants overnight in spiced rum. Then followed the directions for mixing: mixed the dough except the butter and inclusions, let rest, then kneaded in softened butter, let rest, then added inclusions using lamination, and kneaded (tried to be gentle to minimize squashing of soaked fruit) to distribute fruit evenly.

Kneading in butter was surprisingly easy and produced a very pleasant dough, which was very nice to knead with the fruit too.

I then let it to ferment, hoping for it to nearly double, according to the recipe. For Sune it took 6 hrs at 21C. I used cold milk in the dough, so I tried to warm it up by keeping at 24C. And yet, after all day (10 hrs) it only grew around 50%, and I decided to call it quits on the bulk - it didn't seem like it had grown in the last couple of hours by then.

Then divided, shaped the marzipan into two tubes, and folded it into the dough. The dough was breaking very easily, and gluten wasn't holding - I guess such long fermentation with such high inoculation started degrading the gluten. But luckily stollen is supposed to be dense and not much oven spring is expected, so I hoped for the best. Proofed them for a little over an hour on parchment paper, and then baked at 170C for around 45 min, until golden brown. Then melted the rest of the block of butter, and brushed it onto the hot stollen, and then generously dusted with powdered sugar after the butter was soaked up. 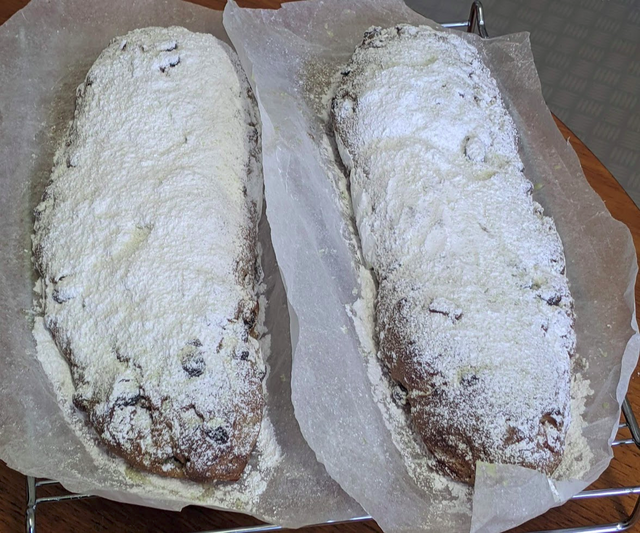 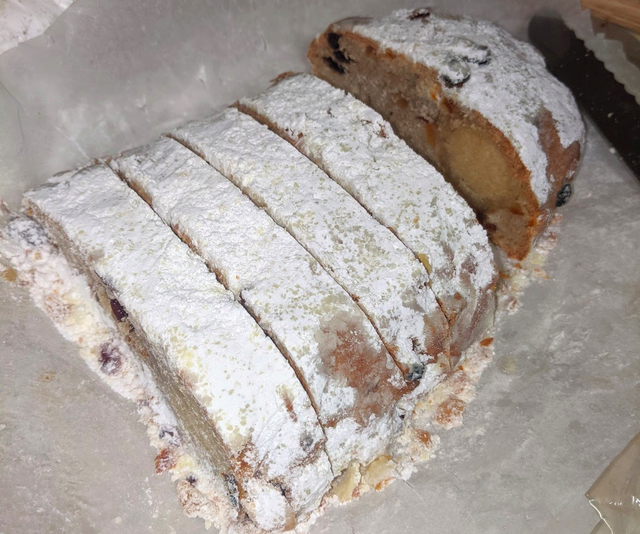 Despite the apparent weak raising power of the levain and likely overfermentation, the result is surprisingly delicious! My girlfriend was apparently skeptical about the whole thing in the beginning, but said she loved the result. I like how the powdered sugar looks like snow, and it's really tasty and festive.

What a fun adventure! All made by your hand from start to finish. Lovely!

Sometimes a SD starter may have a hard time with a high sugar dough unless the starter has been either sugar adapted or made very strong over the 3-4 days prior to the making of the dough. This is one of the challenges with panettone-preparing the starter. For 3 or 4  days prior, keep the starter warm and feed at least twice daily to encourage a high yeast population. It should become quite active and double very quickly. Some starters only need 2 days. This really revs up its raising ability.

There is talk about sugar-adapting a starter by making the environment sugar-similar to the dough you want to use it in. I've never done it but it could be useful if you are going to make a certain dough often. Otherwise, I'd just beef up my regular starter-that is good to use in any dough.

I know that raising dough with lots of fat, sugar and inclusions is a difficult job, but foodgeek doesn't actually talk about that, but I guess he just maintains his starter extremely active, unlike mine, which is often kept in the fridge to reduce the discard. But it was fine anyway! Not sure what would have been different in the end product to be honest, it's not supposed to be soft and fluffy anyway. I would have beefed up my starter before using if I had time (just feed a few times, with low hydration - faux Lievito Madre), but Christmas on a specific day and I didn't plan it long in advance :)

Happy Holidays to you too!

Ilya that is a wonderful bake, it sounds like it can be challenging to make and yet you’ve made lovely stollen and most importantly your gf loved it as did you.  Would you make it again next year and what might you change if anything?

I would not change anything significantly. Only try to maximize starter strength before, like discussed above, hopefully it'll preserve the dough strength and make shaping a little easier. Also bake it in advance - supposedly, stollen gets better with time. Perhaps, we'll manage to not eat the second one until New Year, maybe I'll be able to test this then. But my hopes are low, the first one was gone quickly!

OK, we saved the second Stollen for New Year, and it seems like the advice to age it is a good one: the flavour seems deeper and more rounded now, with both the sweetness and acidity coming through nicely and blending together. Delicious cake-bread! 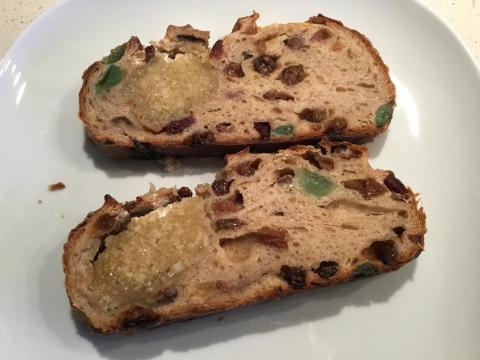