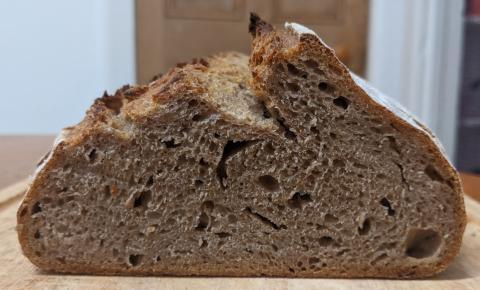 As I posted the other day, I had some beremeal, flour from an ancient variety of barley, I wanted to try using in a bread. And I also wanted to try Abe's very simple sourdough recipe (http://www.thefreshloaf.com/node/66384/very-simple-sourdough-recipe). And although combining two unknowns (new ingredient and new process) - what's the worst that could happen? So I just went ahead, but only made one loaf instead of my usual two, just in case it's a disaster, or if it doesn't behave during bulk I could treat is as a preferment and double the recipe with just bread flour. But none of that happened, everything went fine! Here is the formula: https://fgbc.dk/13td Adding water to what I thought was the right consistency took me to just over 78% hydration, but actually I think perhaps I could have gone higher, maybe to 80%.

I've never used barley before, it's interesting: very weak gluten, but not sticky, like rye. So the dough was not particularly strong, but not difficult to work with either. I developed the gluten as much as I could with some slap&folds, and traditional kneading, but it didn't give a windowpane, so I just hoped the overnight bulk would do its magic, but also wasn't sure with 40% bere it would be even possible to have a very strong gluten. Fermented overnight, for around 11 hours, at 21C. It grew a lot, definitely at least doubled (but hard to tell in a mixing bowl). Can't say it gained much additional strength overnight. Shaped into a batard and proofed for 2 hours in a "proofer" set to 27C, but in my woodpulp banneton the dough would warm up quite slowly. With weak gluten was tricky to tell when to end proof using the poke test, but it definitely grew over that time, and I decided it was ready.

Preheated the oven, scored and baked 15 min with steam and until nicely coloured without. Not the most beautiful bread in the world, slightly uneven, and got some cracks. 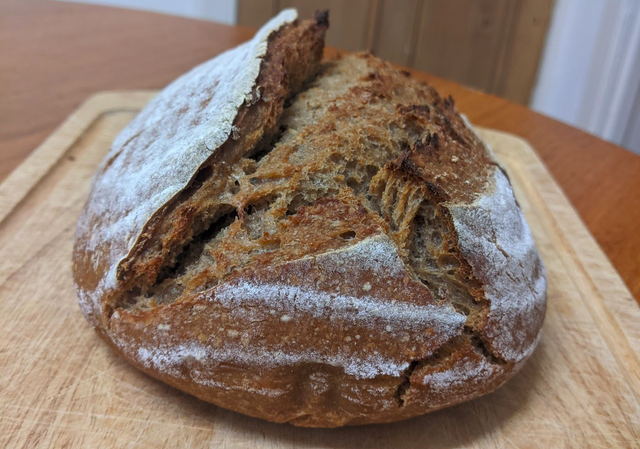 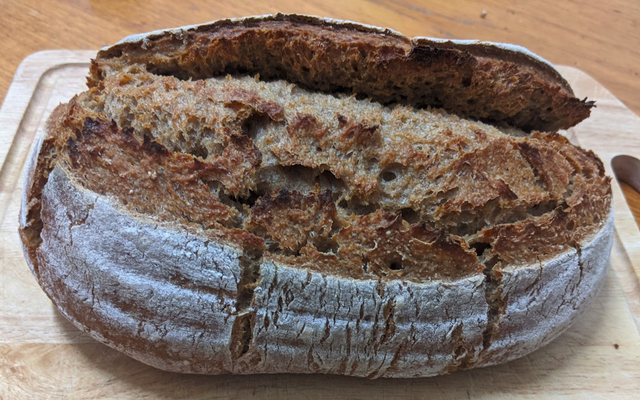 The crumb is very even though! 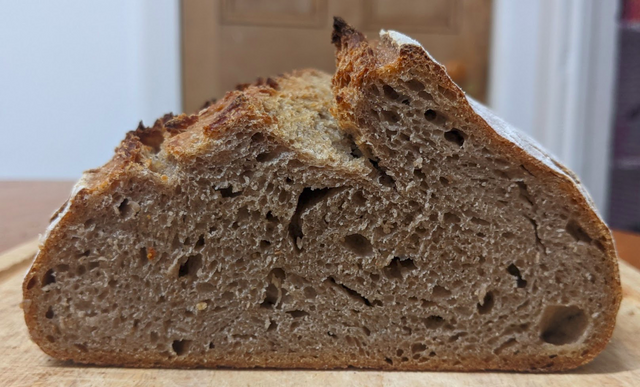 The flavour is great. Nutty and slightly sweet. Perfect with butter. Taste-wise definitely reminds me of that bread I had in a restaurant (http://www.thefreshloaf.com/node/66727/beremeal#comment-476167), but theirs had a much softer, fluffier and lighter crumb. And not as strong taste, but somehow more rounded, if that makes sense. I am sure they had less beremeal in the dough, and probably higher hydration. Something to try next time!

And obviously the VSSDR process works, even with big changes to the dough composition!

And what is even more impressive is that it's 40% barley flour. Barley at such a high percentage is very difficult to work with and will compromise the final outcome. But still that's a very decent rise and a fantastic crumb considering. Excellent crumb even if there was no barley. That's impressive! Could it be the AVSSR has brought out the best not such a weak flour? Now you've got me thinking. Perhaps a return to barley flour which has fallen along the wayside. It certainly is a very tasty grain.

Thanks Abe! The crumb is probably one o f the most even ones I've achieved, which makes the holes clearly introduced during shaping very obvious. I was more firm than usual and degased the dough quite thoroughly before shaping, probably that's why the crumb is so even, by the way.

I didn't know barley was particularly difficult - except of course the gluten is not much to speak of. Maybe not knowing allowed me to just go ahead and do it! I thought it was easier to work than rye at a similar percentage, since it was not nearly as sticky. Maybe at higher hydration it would be difficult.

Also is it possible bere is better for bread baking than modern barley varieties?

But in getting a good rise and crumb. I think one can do better in a higher percentage of rye to bread flour but barley makes it dense and crumbly. In smaller percentages it will impart good flavour without taking away from anything else. I'd have expected 40% to be high enough to prevent a decent crumb but you've gotten the best out of it. You can see how it's started to make it split more when rising. Can't be helped but the crumb is good.

I see, thank you!

Also I noticed that this bread is unusually easy to cut. I can cut it almost paper-thin! Is that a barley thing?

Lack of gluten holding it together. Slices more easily. It produces a dryer crumb but perhaps the 60:40 mix has given the best of both worlds. And it could be a good method to get the best out of this flour. A long slow ferment.

You don't need a very high amount of barley flour to get a lot of flavour. I think your assumption about the restaurant barley bread would be correct. With just 10-20% you'd have a nutty flavour with the lightness of bread flour.

Superb baking Ilya especially with a challenging flour I’ve never heard of before. I wonder how it would work if the gluten was fully developed before adding the barley component like how some of us have been working with the rye?

Thank you Benny! I had this idea, since I think it helped a lot with rye. I didn't do it, since then I'd have to effectively make two doughs, develop one, and then combine them, which sounds like a pain (or hold back 40% of the water, and then add it together with the weak flour... which also doesn't sound like fun to mix my hand). With rye it makes much more sense because you already have all rye flour in the preferment, but also mixing it into a developed wheat dough takes some elbow grease. But luckily barley/beremeal doesn't seem to cause any stickiness, so actually developing the gluten is not a problem, I think there is just a limit how much you can develop a dough that is low in it.

I had another thought Ilya, I wonder what would happen if you used the beremeal for the levain like we do with a rye sour?  Would that allow you to build the gluten in the main dough before adding the levain?  Just a thought I had.

Crossed my mind as well, thanks Benny! I might try that in the future, I just wanted to try the VSSDR approach which is indeed very simple and I like it a lot! Just bulking overnight and not having to think about it too much is great.

Also would be good to find some nice source about properties of barley flour. I was trying to look up specifically beremeal, but of course there is very little info about this specific variety. Need to broaden the search. 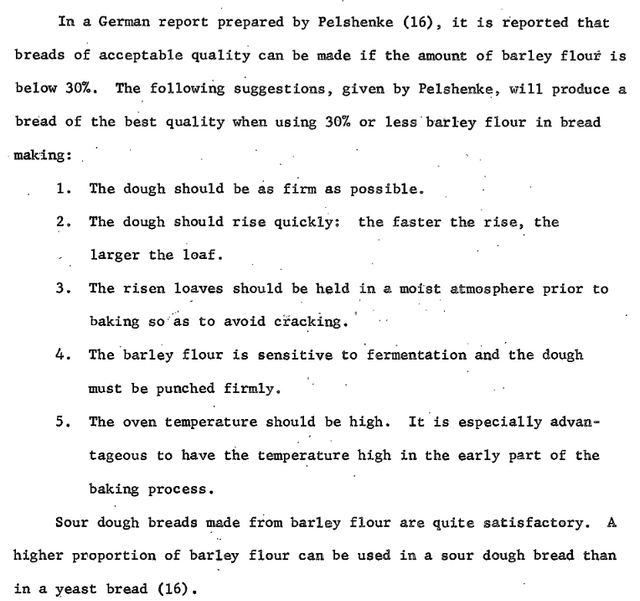 That reference is unfortunately a personal communication and therefore can't get more details than that.

The only issue is they recommend a quick rise, but also say sourdough works well, and more barley is tolerated that way - so a bit counterintuitive, sourdough typically rises slower than CY.

Gives strength to weaker gluten flours. I think original advice is for yeasted loaves. Whatever the case you've done a very good job for 40%. Having said that perhaps try a barley loaf with more starter and a shorter ferment time. You might wish to increase the salt a bit which also adds strength. Perhaps go a tad higher at 2.2%. A small increase to help but not going overboard. Why not try a tangzhong with some of the barley flour? Get the starch to gel a bit more?

Out of all the gluten flours I think barley is the poorest. Even rye with its gel like 'gluten' gives better results, albeit a different kind of loaf not necessarily an open crumb, and moisture but works at higher hydration.

That looks like a loaf that will get you through the day.  I've never encountered this one, but the nutty barley-ish flavor sounds excellent.  Thanks for sharing this.

It is indeed quite hearty, but doesn't feel heavy in your stomach! And the flavour is great and unusual. Thank you!

Very nice looking loaf, and I enjoyed your description of the flavor and texture. I also never heard of beremeal, so thank you for bringing it to everyone's attention.

Thank you! I'm glad you, and others, learned something from my post.