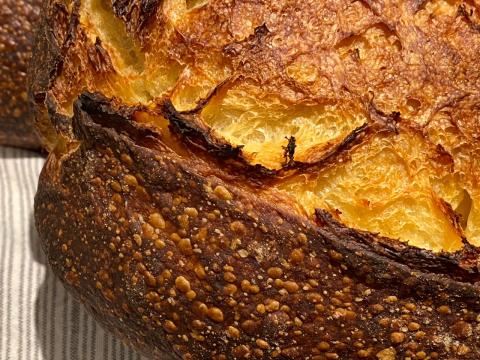 It's been a while since I posted any of my breads, but two recent bakes, inspired by Michael Wilson's post about Semola Rimacinata are worth sharing.

Some old timers on TFL might recall that every few years there is a flurry of activity about breads with this Durum flour and the bakers in Altamura who use it exclusively. I myself was obsessed years ago when I returned from a trip there, and I tried to achieve something like the Pane Altamura that I got there. I did get good breads but never mastered their shaping techniques. A few years later I tried again, but without trying to shape it like they do in Altamura.

Michael's approach is distinctly different from what I had inferred from watching italian videos and had been doing earlier. As he describes his method, the lievitazione or old dough is built at 60% hydration with 2% salt, and there is a long autolyse also at 60% hydration but without the salt. The final dough comes in at 80% hydration. The lievitazione is at 20% of the final dough flour. I won't attempt to repeat his description because he does such a good job of it.

The main differences between Michaels and my bakes are the flour source (mine is Central Milling EFD) and I did not store either the old dough or the lievitazione in water as he does (but it is something I'm likely to try next go-round). The first bake my fermentation and proofs were done at relatively low temperature, about 74˚F.  As Michael did, I developed the dough fully. This is after 8 minutes using a stand mixer at speed 2 with the spiral dough hook.

The first loaf was shaped into a boule. The crumb was not as open as I would have liked, but I'm pretty sure it was not sufficiently proofed.

For the second bake I increased the overall hydration to 83% and did a much longer final proof at 85˚F. This did yield a somewhat more open crumb, though I think there is still further to go.

As Michael points out, the dough is very tenacious and lacks extensibility. It is fairly difficult to work with. I went from 80% overall hydration for the first bake to 83% for the second bake, but there was no noticable difference in the dough consistency. However, there was a distinct difference in the texture of the crumb. In the first bake the crumb was somewhat chewy, almost too much resistance. The crumb of the second bake was very soft and offered very little resistance in the mouth. This is more like the Altamura style.

The taste for both was excellent, a bit nutty and subtly sweet. There was a gentle tang because I did not keep the lievitazione in water, but I didn't mind the sour. The next trials will have to wait until I can get more flour. Meanwhile, a shout-out to Michael for his great work with this flour.

Kudos go to you for an outstanding bake in the vein of the ancient bread from, Altamura!

It is definitely a place I want to get back to once we can travel again.

Crust and crumb look outstanding to me Brad, very impressive bakes.  I’ve only used my Semola rimacinata for baguettes and have also now run out.  It isn’t the easiest flour to find around here.  I’ll have to have a look at Michael’s post if and when I can track down more of the flour.

Semola rimacinata is something I love coming back to. Challenging, and rewarding.

A fine showcase of golden hued bread there Brad!

Good to know my methods are repeatable...

Thanks for the nod,

Thanks. Yes, it seems to be robustly repeatable, I even experienced the dough falling apart when adding the water with the lievitazione. That is a lot of water to reincorporate and the effort took nearly 10 min. due to the clay-like nature of the dough. But it eventually decided to cooperate. I will take this a bit further when I can replenish my flour supply. Thank you for helping us understand this difficult grain.

Second one is excellent. That looks delicious Brad. You've hit the nail on the head with that crumb. As I said in the other post there's a narrow window for that perfect sweet spot when it comes to fermenting durum flour. You've hit it!