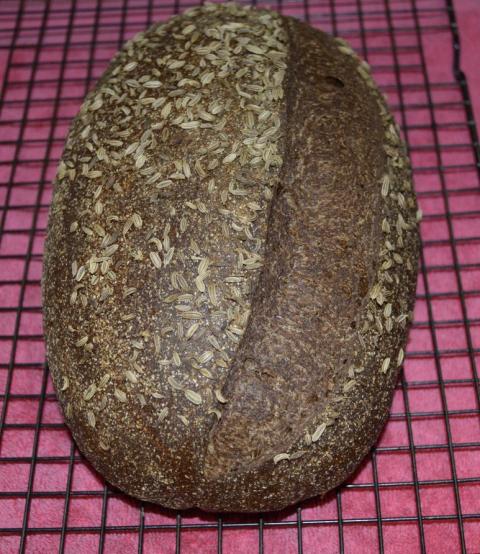 My Community Bake and tribute and acknowlegement to Eric Hanner . i made my first post  on June 10 2009 and received nice replys from Sylvia H,.dmsnyder. marni, ehanner, ques2008 and fellow Aussie  Shiao Ping who told me she had just joined TFL recently herself. Eric was always replying to posts and gave great encouragement not only to me but to most posts and made everyone feel very welcome. 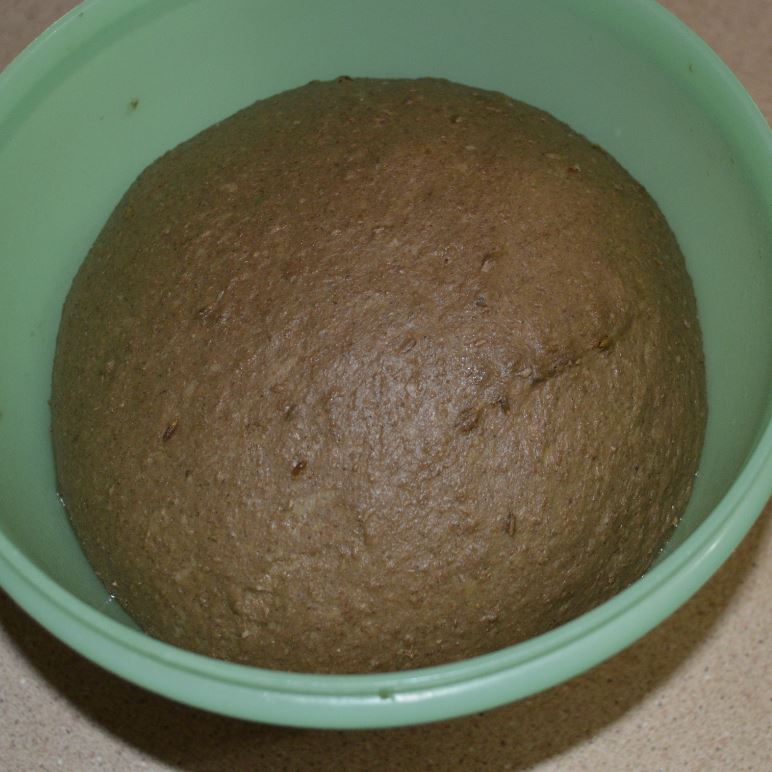 This is the dough near full proof after 3 hours 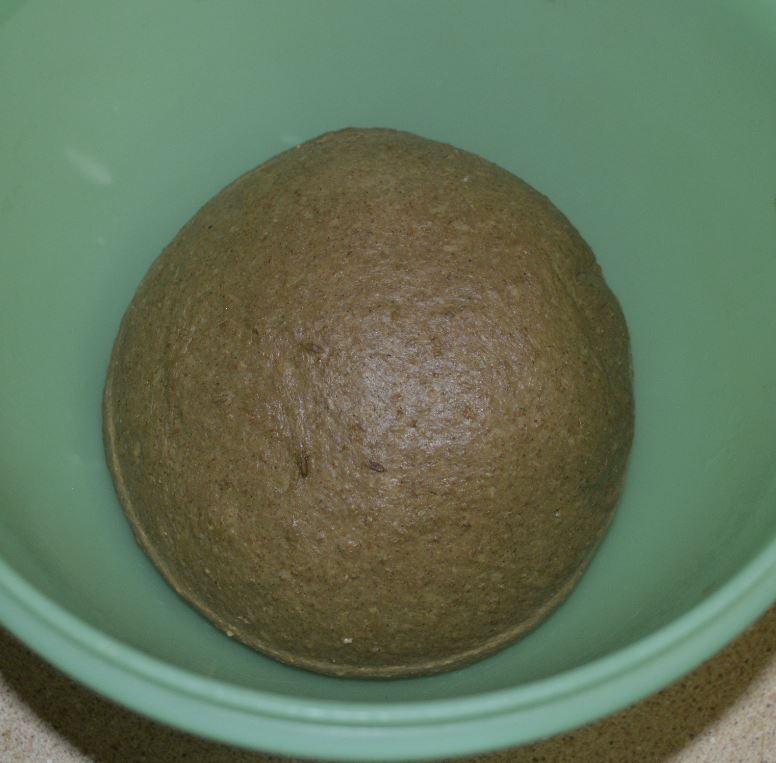 this is the dough knocked back and degassed 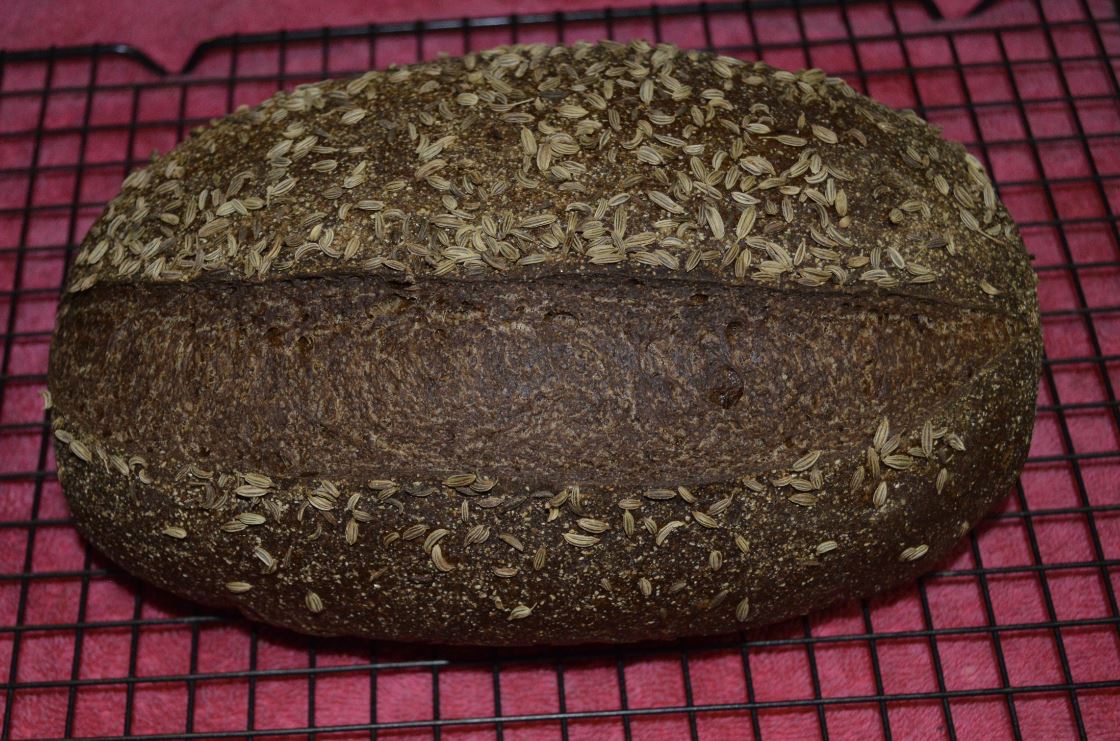 Out of the oven and cooling 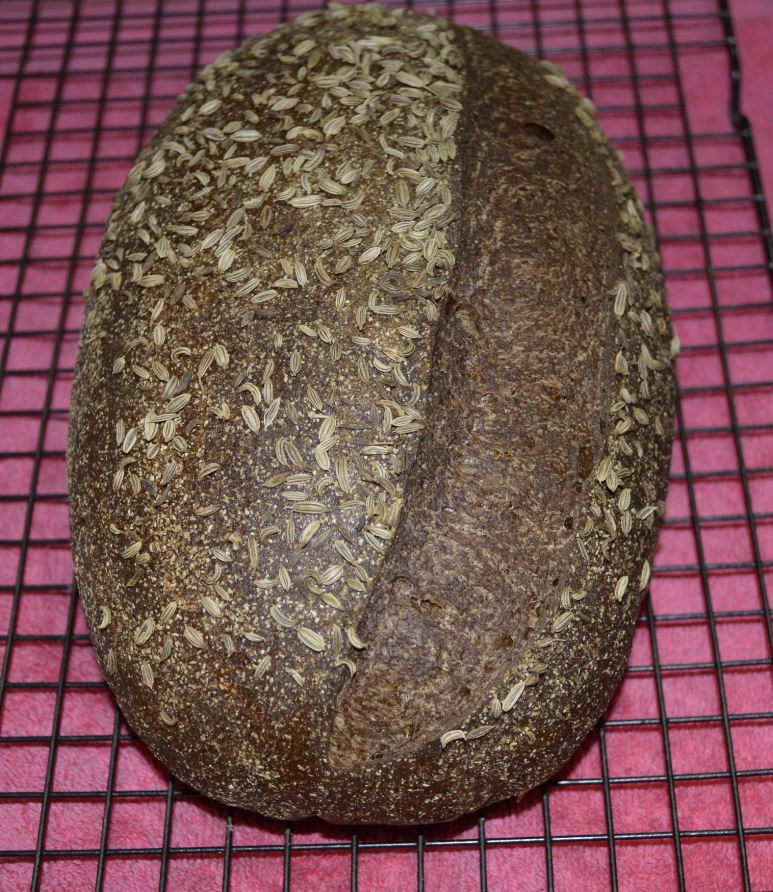 Derek, that bread is a real looker! Beautiful.

The addition of oil is interesting. I know very little about rye breads, but oil doesn’t sound like the norm. Is that correct?
Maybe the oil will increase the moisture of the crumb, which I desperately desire. What do you think?

Can’t wait to see the crumb...
Also, very interested to hear your description of the texture and flavor.

Thanks guys you were quick off the mark, going to bed shortly  here so not to long to wait to get stuck in. The oil will help with a moist crumb it also helps with the w/m, you could see a visible sheen on the dough  which no doubt comes from the incorporation of oil. The Stout with its malty characteristics will also lend its self to a moist crumb the recent bake that i did using 65% caputo itegrale and 65% stout  was a very moist crumb and the loaf my daughter took to her workplace received rave reviews with people wanting to order loaves!

Sorry Dan that is Wholemeal,   and in the context that the oil helps lubricate the gluten strands against the rough edges of the bran.

Love the colour of the loaf Derek and the seed coating looks awesome.  Can’t wait to see the crumb and your description of the flavour.  I bet the stout adds a lot to it.

I said i was thinking of doing this and voila  colour is DARK isn't it. the Fennel seeds are quite large on the outside , i used a thicker boiled cornflour paste so that the big seeds stay stuck on the crust rather than fall off. The smaller carraway ones are on the inside. off to bed  now and looking forward to morning and slicing into it. Kind regards Derek

He was sadly gone a few years prior to my appearance on TFL.  The list of TFL bakers you mention cover many of the early heavy-hitters.

I found an obituary for Eric when I was writing up the post.  He seemed to be passionate about more than just bread. Part of the obit...

Beautiful loaf and the color so reminds me of the pumpernickel breads that were available at all of the local bakeries growing up.  We were a dedicated rye bread family, but pumpernickels frequently found their way into our home as well.

Love it, just gorgeous. Can't wait to see the crumb!

Side note: I've been lurking on here for a long time and even though I never posted until this long "quarantine," there is no question I learned to bake bread from you and all the people whose names you mentioned and many more. Early on, I gravitated toward Eric Hanner because he was the first accomplished rye baker I found, and David Snyder because he was baking the same Jewish rye I was and doing it so much better. So many bakers in this forum have been absolutely inspirational. This has been a wonderful sharing community since its inception and continues to be so. I learn something on here every single time I log in. Y'all are great. Thanks, everyone!

Hi AG, What can i say other than ME TOO.and although fortunate enough to have had a professional start to my baking life its now in my retirement from work that i am getting some of the most pleasure especially in the sharing whether its the actual bread or just how its done. TFL has been a great vehicle to share the ride  along the baker's  road with fellow travellers.

i guess the excitement got to me  its just gone 4.30 AM and i had to get up i even beat the a local Honey eater a bird that tells me dawn is on its way He is calling now and the promise of a beautiful day to come is being heralded. its a pleasant cool 11 degrees forecast is a partly cloudy day zero chance of rain, fire danger is high,  Cloud clearing to a sunny afternoon. Light winds becoming south to southwesterly 20 to 30 km/h in the middle of the day. Sun protection recommended from 7:50 am to 4:20 pm, UV Index predicted to reach 12 [Extreme]

But now more importantly the loaf has been cut the interior has been revealed a slice has been tasted on its own  the second slice was buttered and the third was consumed just for the sheer enjoyment. everything i had hoped for and more. a unconventional take on a deli rye but would certainly be a worthy carrier of the traditional toppings that a deli rye would be asked to carry. This is my first real attempt at a rye bread and its one that will definitely be repeated.

I made this dough along the lines of a couple of previous bakes, all the liquid is combined with an equal amount of flour that produces a sponge or soak at 100% hydration consistency. For this dough that was all the Dark Rye @ 152g and 87g of the Caputo Integrale to this is added just 0.5% dried yeast  this is then set aside to become quite active and  reproduces to bring its yeast  to a higher level it also forms its gluten strands  and hydrates the flour particles. 2 hours seems right for this , i did do 3 hours before and the sponge was just starting to fall in.The remaining ingredients are then added and the mix was performed on the bench the Carraway Seeds were added half way through the mix and once a nice dough had been formed it was bulk fermented in this case for 3 hours. the dough was then knocked back and rested before final shaping and placed into a banneton for final proof  this took 2 hours. the dough piece was tipped out onto baking paper washed with a thick boiled cornflour paste to ensure that the pre prepared soaked Fennel seeds stick to the crust it also assists the skin of the dough to expand before it sets with the heat of the oven . the loaf was scored length ways rather than what seems to be the traditional 3 cross cuts. the baking paper was then used to lift the dough piece into a room temperature Romantoph clay baker and placed into a gas oven that was still running up to the maximum temperature i had set it to. i kept the lid on for a good 20 minutes with the temperature still set at the maximum 250C mark but dialed it back to 210 - 220 once the lid was removed. And lastly the bread was allowed to cool completely overnight. 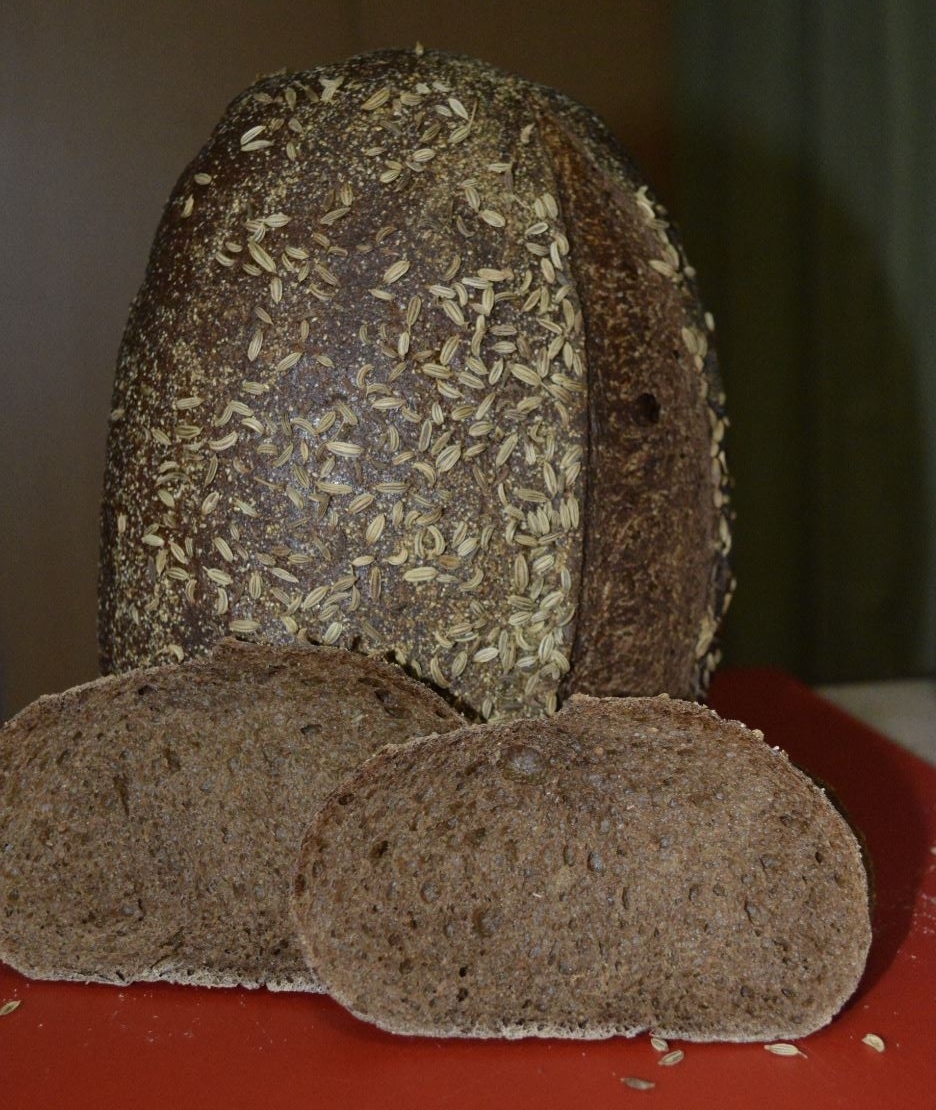 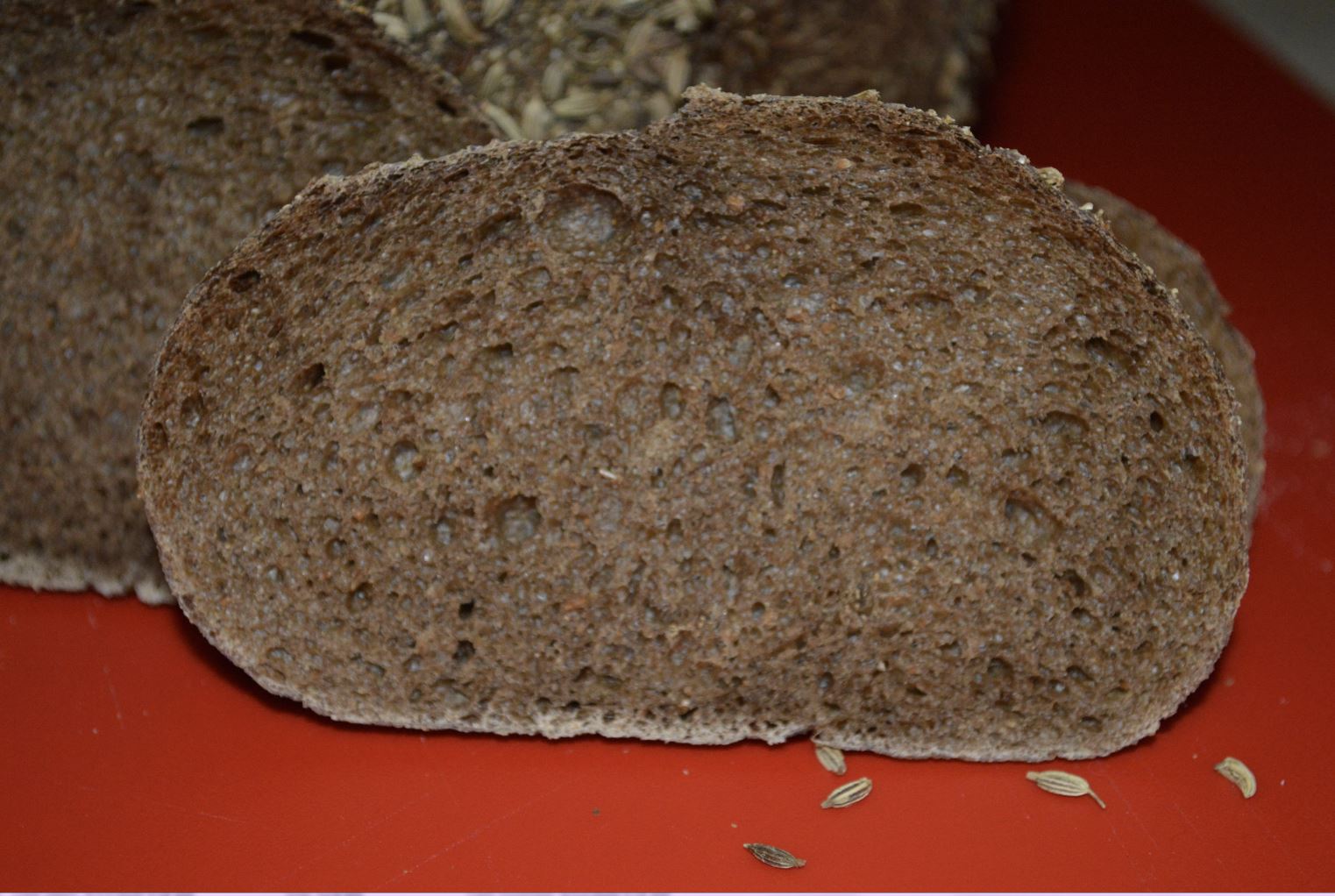 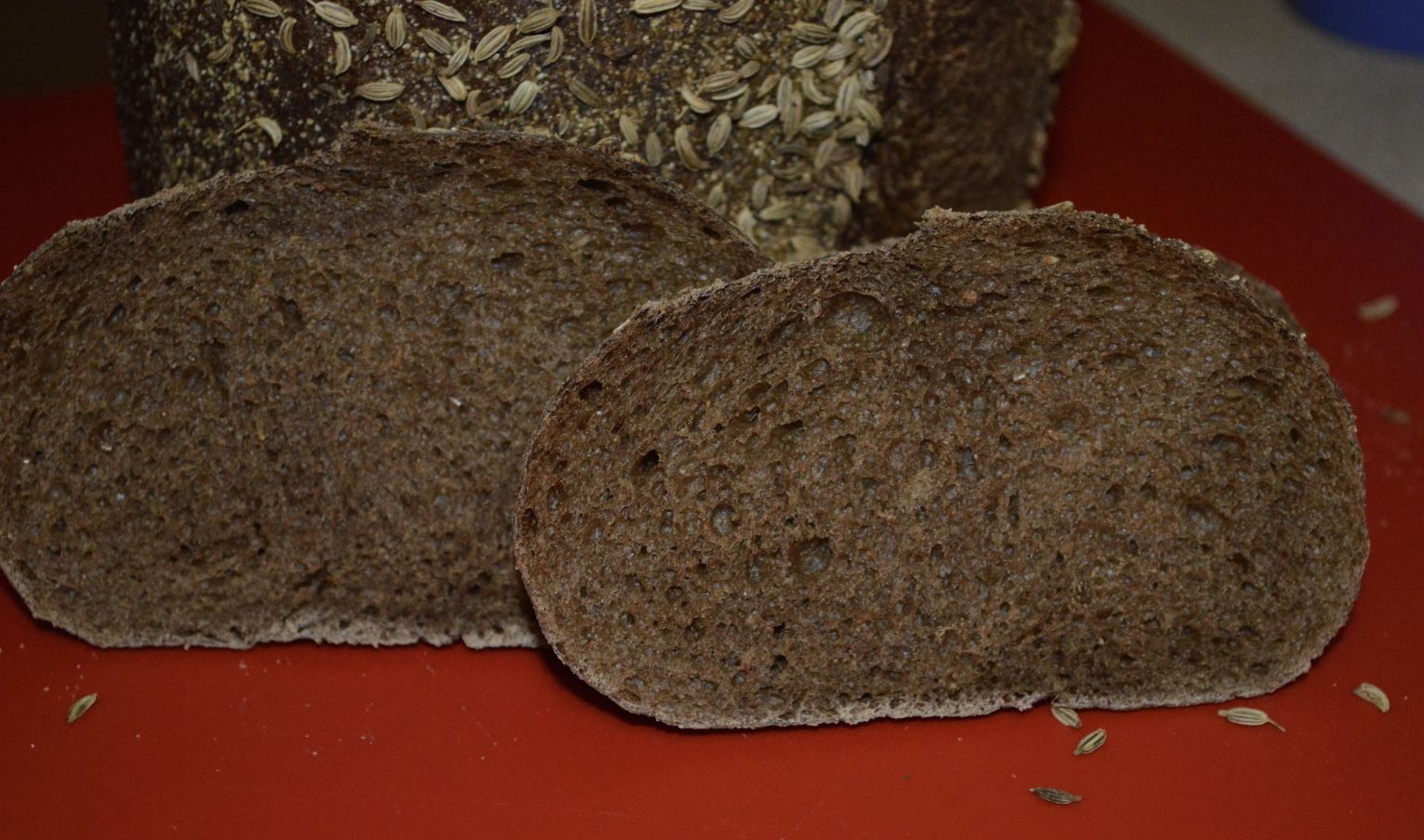 An real great looking loaf. The chocolate brown crumb looks super appetizing. AND it gives me an idea. I may consider adding a little chocolate malted barley, both for color and taste.

How I wished I could get a taste of your bread.

Update -
Caputo Integrale is whole meal! What kind of rye did you use? The fact that you used 65% whole meal flour with 35% rye is impressive! I would not think it possible to produce such a nice open loaf. Color me impressed...

That is so true Dan, this is 100% whole grain with such an incredible open crumb.  I LOVE the colour and I bet it tastes incredible.  Really well done Derek.

Hi Dan  the Caputo  Iintegrale (wholemeal) lists its protein as  12% I will have to check out the Rye as i bought it from a store in Fremantle that has bulk bins and  i just helped myself to a couple of kilos.  Sometime ago Andy  (Anadna)   convinced me to stop adding gluten to my doughs  and i have refrained from that ever since, working with what you have got rather than boosting gluten levels through addition, I also  have a pet hate where the product is referred to as"VITAL" wheat gluten instead of what it actually is Gluten plain and simple. I digress,  I agree the colour is magic  and a product of both the Dark rye and the Miners stout. I wish you were able to share a slice and perhaps you could try either  a Guiness or a Porter  or better still a Coopers stout in a mix . i will get back with the details of the Dark Rye soon.

What an amazing looking hunk of bread! This is for sure artisan quality work.

Thankyou for your comment  and a man that has NY deli Rye at his doorstep Hi praise indeed !

Fantastic bake Derek!  I also love adding a nice dark malted brew to my rye breads and alway enjoy the moist flavor boost it provides. After Eric’s tragic sudden passing I had posted a tribute bread that used a rye leavain and a yeast water leavain along with a summer ale.  I am working on an updated version for the CB with out the YW leavain and using fresh milled rye.
I’m sure Eric is smiling down on us enjoying all of these inspirational rye bakes in his honor.

Thanks Ian i'm sure Eric would be smiling and probably submitting a very nice offering too. I think you should resurrect that tribute bread you did back then. I was quite blown away  with the lightness of the crumb and the darkness of the colour. I shall be toasting a couple of slices for breakfast very shortly and crowning it with a nice poached egg. Meanwhile i have to track down the source of the Dark Rye flour that i used  as it came from a bulk bin, i think there are two millers of Rye here in Western Australia.