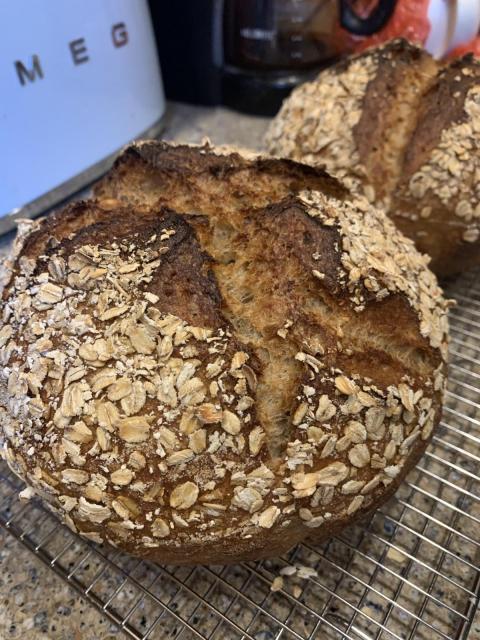 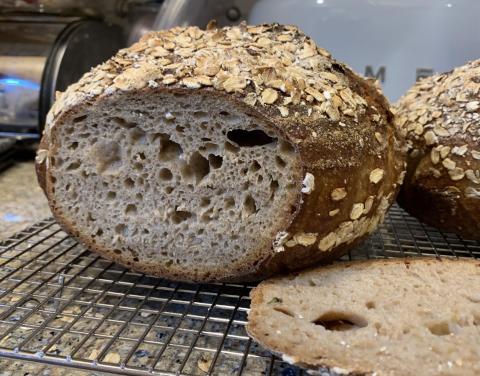 I couldn’t be happier with this new attempt at the Tartine 3 oatmeal porridge bread. . The first time I made this bread the hydration was a bit over the line — the dough spread out like a pancake and I didn’t get a ton of oven spring. With the changes I made today, the dough was incredibly billowy and easy to shape, and the oven spring was incredible – hard to tell from the photos, but one of these loaves is like a basketball!  As for the bread, it's crusty on the outside, soft and moist on the inside. My best loaf yet, for sure.

I have to give a shout-out to Maurizio, because his 2014 oat porridge bread entry had loads of tips that inspired me. Here are the main changes I made to the original Tartine 3 recipe:

- Reduced the hydration by 50g

- and added the porridge at the post-autolyse mixing stage instead of at the first fold.

158g Levain from above

5 hours at 78 degrees in Brod & Taylor proofing box, until light and bubbly

Rather than cooking it, I just poured boiling water onto the rolled oats and soaked them for 2 hours.

Mixed 625g water and levain until dissolved. Added flour and malt, mixed until there was no white visible.  Rested covered, 1 hour.

Mixing
Mixed the oats with 50g water (to make it easier to mix into the dough), then added to autolyse mixture with the salt. Pinched and folded for 5 minutes, but seemed dry, so added another 25g water. Used the rubaud method for 10 minutes to further mix and build strength.

5 stretch & folds, at 30-minute intervals (the later stretches were gentle, as the dough was tight)

Shaped into tight boules, then picked up and inverted, coating the bottom in uncooked rolled oats before placing in 8” bannetons.

Proofed for 12 hours in 39-degree fridge.

Inverted onto a parchment-lined plate and lifted into Emile Henry bread pots heated in 500 degree oven.

Note: The dough sticks to the bannetons a LOT.  As you invert the banneton, you have to reach your fingers in and loosen the edges until it releases onto the plate.

Chelsea, really beautiful baking you’ve done there, thanks for sharing the details of your formula.

" Inverted onto a parchment-lined plate and lifted into bread pans heated in 500 degree oven. Scored and baked in Emile Henry bread/potato pot, ..."

I'm confused what the bread pans are doing between the plate and the EH pot.

Hmm let me try to clarify. The dough is in a banneton. I put parchment paper on a plate and put it on top of the banneton, and turn it over and remove the banneton.  I then lift the paper with the dough and lower it into the hot dutch oven.   Does that make sense?

I thought the "bread pan" was something other than the EH pot/dutchoven.

In the US, or at least to me, a "bread pan" is a rectangular thin-walled metal pan.

The profile of your “basketball” loaf is interesting. Normally the bottom of the loaf is flat. How do you account for the round bottom?

Danny, the round bottom is from my Emile Henry bread/potato pot. All the loaves come out like that.  Overall the size of this pot really seems to help with oven spring by constraining the dough.

Thanks, I like the rounded profile. I have gotten that affect using a Lekue . The breads bakes up like a football.

That is some delish looking porage bread!