How to find nice crumb in a Panettone or Pan Dulce?

How to find nice crumb in a Panettone or Pan Dulce? 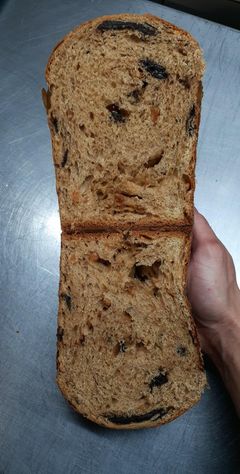 Hello everyone, I am Jesus. I am a baker and cook. I find myself now making Panettones in the bakery. I would love for someone to help me understand the crumb of Pannettone. How soft, how should the alveoli be, what is the ideal crumb for a Panettone?

I wish I could find a crumb with big air holes?Thanks in advance!!! Peace
Share

Panettone crumb does not have big holes. It should be very soft and delicious! Your picture is a bit small so I am not sure I can tell, but it looks pretty good to me, maybe could be a little lighter.

Hard to describe in words but I'll try. If you Google "panettone crumb" and look at Images, it will help.

It also may help to understand how the crumb is classically achieved-it is not usual.

Panettone is CLASSICALLY made by using a very strong and active natural levain, a strong (high protein or bread) flour and time to degrade the strong gluten that is formed. That's right-the very strong gluten strands are fermented long and cool so that the proteins actually degrade to a tenderness but they don't lose their featheriness. Kind of like aging meat-fine line between aging properly and spoiling. It is so feathery that when it cools, it cannot support its own height and should be cooled hanging upside-down. It is a pretty fussy product but so delicious when it is done classically.

I understand the concept but I have never made it.Too fussy. My variation is to make what I call "Panett-oche"-it is a hybrid of a panettone (mainly flavor/fruit/enrichment) and brioche. I do try to make the crumb as feathery and light as possible but it is not the same as  the delicate panettone crumb.  It is a lot less fussy, though. When I have a "real" panettone, the difference is obvious.

Your version looks pretty close. My recommendation is to try using a regular AP flour rather than a high protein bread flour. It will not be as chewy.

Bread flour is an easier. more consistent rising flour to work with in a bakery setting but it tends to make a chewier crumb and I'm not a fan of chewy.

Enter "panettone" into the search box and TONS of posts will pop.