I took advantage of Thanksgiving weekend to bake a bunch. I have the perennial problem of never following through completely on my plans because I try to do too much, but I'm still happy with what I accomplished. 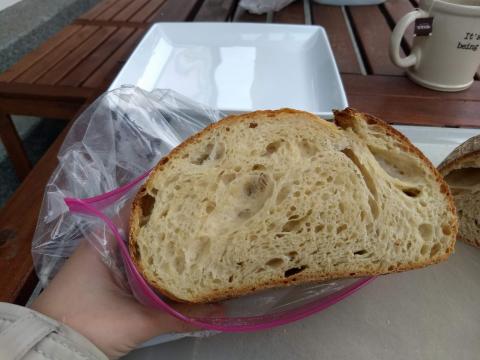 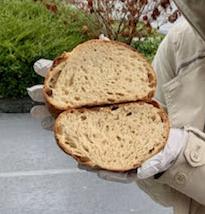 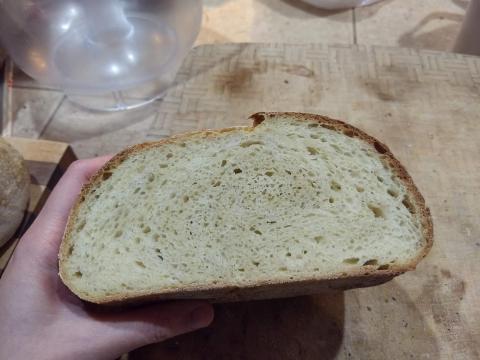 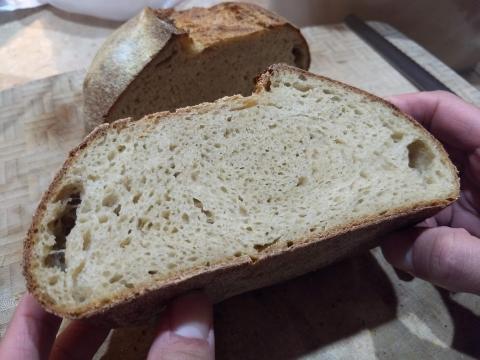 Kamut- My goal with the kamut loaves was use the aliquot jar and get better at judging timing. I meant to read up more on the aliquot jar before going into the bake, but never got around to it, so I'm still less accurate than I'd like to be. I shaped the first loaf ~ 50% rise, and the second around 60%.

Despite the lack of ear on the second loaf, I'm still pleased with the crumb. I'm learning that slight overproofing is no big deal to me, so I'd like to do the opposite next time. Very mild sour taste for me.

Millet- Reduced hydration by 50g, which works out to 67% hydration. Told myself I would add in more depending on how much the millet affected the hydration. Forgot and then felt it was too late at the end. Stiff and harder to work with. Definitely will try again with more water. Was a bit dense. Husband commented that it had a beer taste. It tasted "gluten-free" to me because the only times I've had it are in gluten free bread. Added very springy texture.

Amaranth- Home milled. Reduced hydration by 40g, which works out to 70% hydration, only because I splashed in a bit more than intended. I wouldn't go much higher. This grain smells so earthy! Mild earthy aftertaste.

I split the oat porridge recipe into three loaves so that shaping would be easier. Mixed in the oats with the salt. Last time I ended up splashing in more water to the porridge, and I felt that the dough spread a bit more than I wanted it to. This time, I only added in 50g extra to the porridge, but then it was harder to incorporate. I couldn't resist splashing in more water later because it felt a bit stiff. I lost track of time and let it go longer than I intended so overproofed quite a bit. 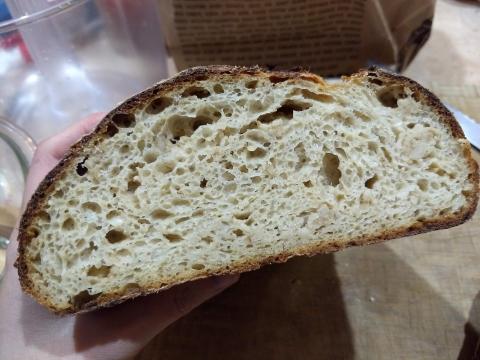 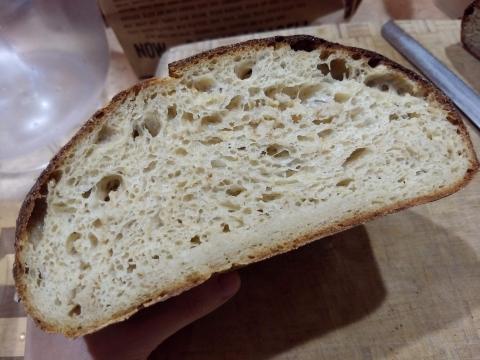 Two of the oat porridge loaves. You can see that gummy line of sadness prominently. Especially because the second loaf had a more rounded bottom, so it sank from its own weight. Shaped at 45% rise, and meant to do a short room temp proof, but went an hour longer. Felt sluggish compared to the amaranth, but I'm not sure that was actually the case. Taste was still good, and texture was nice and squishy except around the bottom of the loaf. 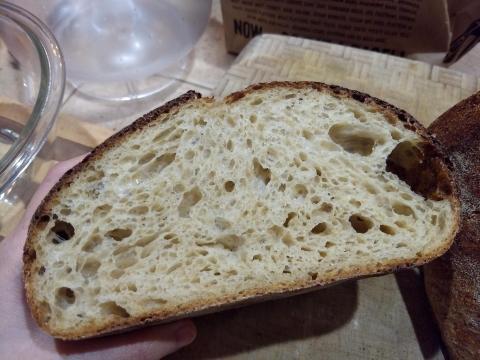 Amaranth- Subbed out oats from amaranth. Made 2/3rds of the recipe. For the porridge, I simmered 20min, turned off the heat and covered for 10min, and it turned out just right. I didn't add all the water when I added in the starter and salt. Also overproofed. Pulled at 60-65% rise. Pleased with the crumb. Also very nice and squishy. Mild earthy taste as well. I think it's a bit stronger than the amaranth flour loaf, but I need to pull that out of the freezer to do a side by side comparison.

That is a lot of loaves! I started using an aliquot jar... I am finding it so incredibly useful as a feedback tool to better understand my bulk ferment and proofing decisions. Also, side benefit of the aliquot jar. You can take the dough out when you are done with it and bake up a tiny mini loaf in your toaster oven. I keep trying to score my mini-loaf and failing, it is fun though.

I have been reading a little lately about when along the fermentation process to shape your loaves. My understanding is that if you want a more open crumb, you want to shape your dough earlier in the rise... maybe around 30%. If you want a more uniform crumb, shape it later, like 50% of the way through your rise. Anywhere, here is a tfl post that does a better job explaining, they are quoting one of my favorite bakers... Trevor J Wilson. Buy his e-book, it is great.

See the first comment from Lechem for the good stuff.

I have a long list of things I want to bake, and I don't bake as often as I would like, so I end up doing a lot of loaves at a time. I'm amazed by how often you're baking the sandwich bread loaf, and how well you're documenting the process. That is a fun thing to do with the aliquot jar. How big is your aliquot? I just add it back in with the loaf when shaping.

That is very interesting. I was wondering about the effect of dividing time between the bulk and the proof. Definitely some thing I want to test out for myself as well.

My aliquot is a repurposed glass spice container, about 3 inches tall and 1.75 inches diameter.

"I'm amazed by how often you're baking the sandwich bread loaf, and how well you're documenting the process."
That is my personality, I obsess about something for a couple weeks until I get burned out, then I take a brake for a while. I know it is something I enjoy if I keep coming back to it.