I bought a bag of semola rimacinata a few weeks ago, and finally decided to try it. Found the recipe here, and basically followed it, except increased the hydration to 70% (and even that maybe was a bit low, I feel the flour could have taken more): http://www.thefreshloaf.com/node/14268/pane-con-semola-rimacinata-di-grano-duro

Mixed the levain overnight, it really quite cold here, so it didn't quite double until I placed it on the radiator in the morning, where it quickly jumped up.

Then used warm water, did some slap&folds to start gluten development from the beginning, and roughly followed the timings in the writeup above. Stopped bulk when the dough was jiggly and I could clearly see bubbles through the walls of the plastic bowl. I was originally going to retard shaped loaves overnight and bake in the morning, but had a change of plans that I was meeting friends fur brunch, and wanted to bring one of the breads to them, so had to proof in the evening and bake same day. And I of course coated them in sesame seeds!

The oven spring was, like in my last bake, OK, but not spectacular. Love the colour of the crust and crumb. I am not sure whether the oven spring would have been smaller if I fermented more, and it doesn't seem underproofed to me, but I think the taste could be more pronounced.

Ilya I bet that bread tastes really good especially with the sesame crust.  I don’t have a ton of experience with Semola rimacinata having only baked twice with it this year in baguettes.  The crumb I was able to achieve wasn’t as open as other formulas I used without the Semola rimacinata.  I suspect you are right, you could have gone higher with the hydration, the crumb opened up more with the second bake I did when I increased the hydration.

Thank Benny! Yeah, I forgot to mention, I didn't think originally to add the sesame seed coating, but saw the Hamelman's recipe on KAF website (and the video with him making this bread on youtube! amazing to see him in action), and there he adds sesame seeds both inside and outside! I thought I wouldn't add them to the dough directly to see how semolina crumb tastes without extra flavours, but did add them outside.

I need to get more semola rimacinata for next time, but I'll try again, with higher hydration and overnight cold proof. I think it'll bring the flavour out more. Maybe will just go for 100% durum too! Will thin about it when trying next time.

It's a great bread already, though, you are right!

Ilya, I'm not an expert on durum, but I would say that if your loaf was normal wheat, it has the appearance of moderate under fermentation, with some tight patches and a smattering of bigger holes.

Whether durum is different in this respect I don't know, but I would ask the question as to how much rise you got in bulk?

Maybe you are right Lance, I was really unsure when to stop bulk with this bake, I think with only 70% hydration observing it is more difficult than with wetter doughs. And with a new flour too.

I am afraid I can't really say how much rise I got, it was just in a bowl where there is no way to judge the level of rise (and the couple of times I tried using an aliquot jar it just didn't work for me, no idea why, so I am not using it). I would not argue that this might be slightly underfermented, since this thought also crossed my mind - the only problem is I thought with underfermented dough you'd expect huge oven spring, which I didn't get here?

I've reached the center of the loaf and now it's much more obvious it's underproofed, some rather big holes!

Agree with Lance, regarding fermentation issues...

Thank you Michael! I'll be sure to bulk a little more next time. As usual, judging the end of bulk is the most tricky part for me, and I think for most bakers early in the sourdough journey.

And of course, I saw your post in September and forgot about that! Very interesting thoughts at the end of your post and in the comments, I'll remember that for the next attempt. Just need to get semola rimacinata again, don't have much left now.

Ilya, from your comments here and elsewhere it sounds like you struggle somewhat with temperature in your winter breadmaking. Having experienced the Edinburgh winter climate myself, I think you are doing very well!

I live in Lancashire and have amassed and constructed a whole array of devices to keep things warm; Edinburgh is a few degrees colder than here, not to mention that East wind!

Ha, thank you Lance! Luckily we at least moved to a warmer flat this summer, I am scared to think how my baking would have been affected by the cold weather now in the previous flat with holes in the window frames and electric heating! The starter was really responsive to the weather there in spring - at least the spring was quite warm this year. Interestingly, though, I think it was affected more by unusually hot days. Guess Scottish yeast are not used to that :)

I haven't constructed any devices yet, just juggling keeping the starter/dough close to the hot water tank (that works really well for the starter, but no space for a large bowl of dough sufficiently close to the tank, on the radiator and just at room temperature, and using quite warm water when mixing. I've been really tempted to just bite the bullet and order the Brod&Taylor proofer (especially after a number of bakers commented here recently how great it is), it seems amazingly useful, but the price is a bit of a barrier. I was hoping they might have a discount for Black Friday, but no luck - now hoping for Christmas sale.

Yes, those B&T proofers seem to have increased in price considerably since I last looked (not that I need one). It's surprising that no one else is making something similar - a bit of healthy competition might be useful!

Oh, were they cheaper previously?

I was thinking the same, that it seems like a simple enough thing to manufacture and could be cheaper with a bit of competition - but I perhaps the demand is not high enough? This one was sold out for months during the lockdown this year though, with all the quarantine bakers like me I guess - and probably limited production...

Well, if it's frequently sold out, it suggests plenty of demand and even if that design is patented, you can't patent the whole concept of a packable proofing box!

I do worry that it appears to have no insulation - not so good from an environmental point of view.

I don't know whether it happens frequently, this year has been unusual in many ways.

I wonder what sort of setups you have developed, by the way? I know people use terrarium heating pads and the like, and they are very cheap.

Well, I built my own proofers - two of them! This is Junior, recently upgraded with Aerogel insulated panels and a nice Carel controller. The sections are held together with magnets and it dismantles for storage. There's a heater and small fan under the raised base. It's big enough for levains and a bulk based on 1kg of flour. 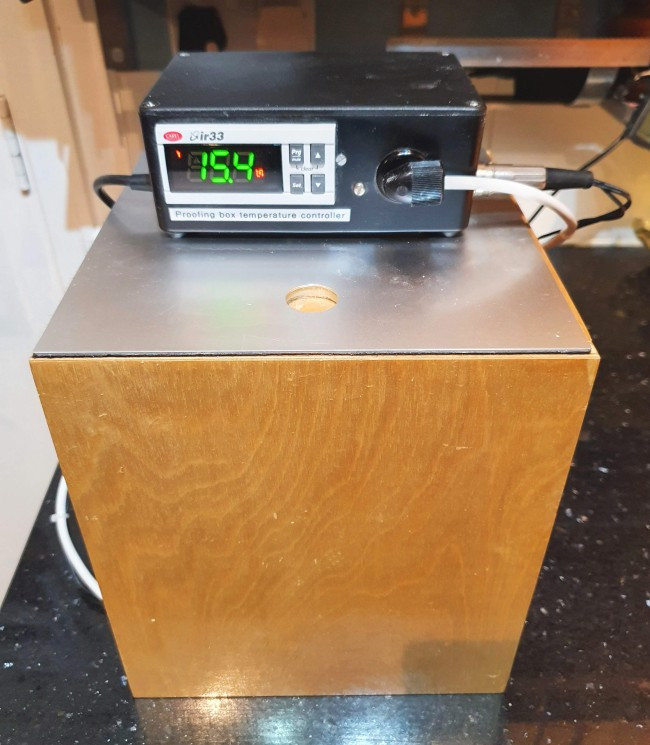 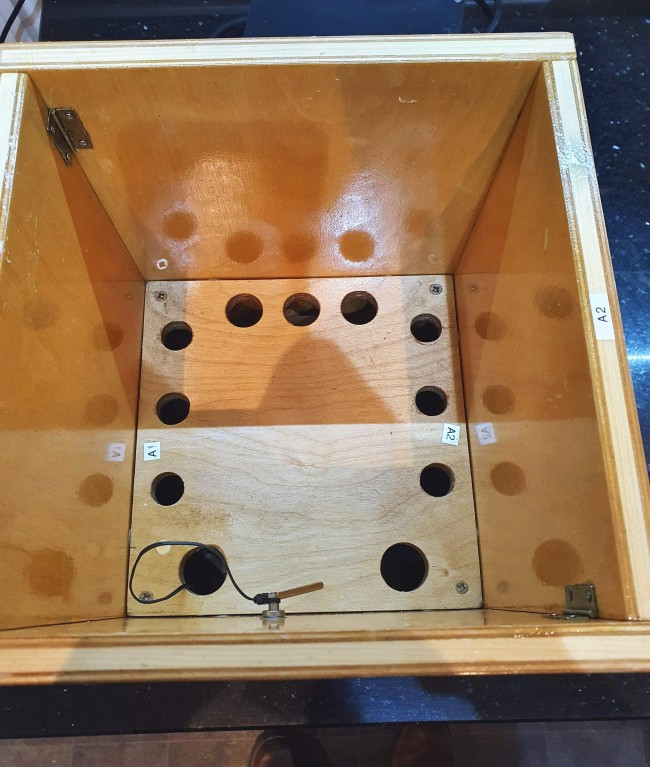 But I think you can make something quite useable with a sturdy cardboard box, a heat mat, Inkbird temperature controller and a 70/80mm low voltage fan to circulate the air to achieve an even temperature. Create a raised platform from a baking cooling tray sat on a couple of pieces of wood that your containers are placed on.

A very impressive setup Lance, not in any way worse than the B&T proofer! Very nice, maybe I'll cobble together something similar. Thanks for sharing!

(Except theirs can double as a slow cooker apparently, and I guess that wouldn't work with yours)

Just received my Amazon order with a heating pad and a thermostat with a probe. No fan just yet. Trying it today! Exciting.

At the moment I just cut off the top of the box and put it upside down on my starter covering it. On the bottom is the heating pad with an insulating layer between the pad and the jar with the starter, and the thermostat probe is coming in through the small hole in one of the top corners of the inverted box. I am keeping it in the cabinet above the hot water tank, so it's never really cold there anyway.

The temperature is fluctuating quiet a lot I think, but I guess the starter, or dough in the future, has high heat capacity and won't be fluctuating as much. And will be warm for sure!

That’s great Ilya, I think you’ll find it is super helpful to your baking.  Can’t wait to see what you bake next.

Let's have a pic! 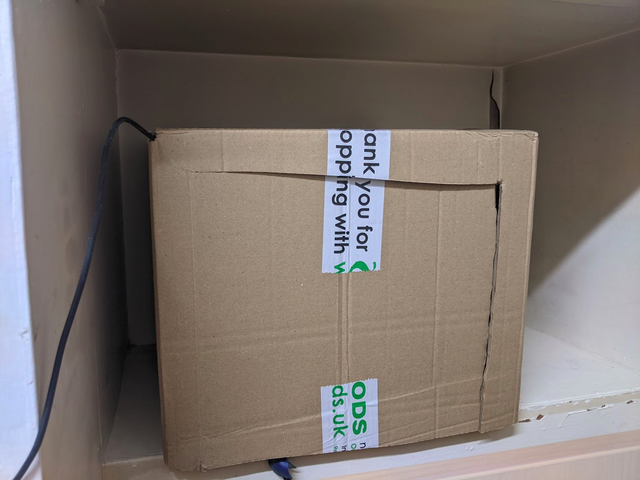 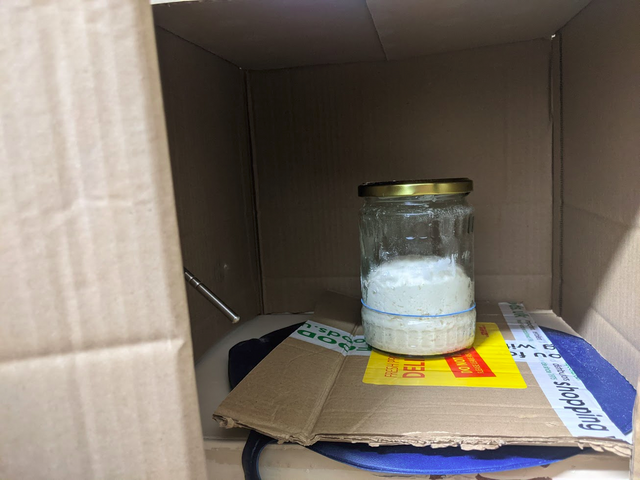 Just now before posting cut out a "door" in the box, since taking it all out just to have a look at the starter was annoying - but now need to find something to keep it in place, it doesn't close very securely.

Door latch: maybe just a piece of string formed into a knotted loop. Pierce a small hole in edge of door. Knot on inside, loop on outside. Loop goes round corner to side of box and hooks round a pencil or similar stuck into side of box.

Yeah I was thinking of something similar, I'll try and see. Maybe just a pin in the box and a rubber band. 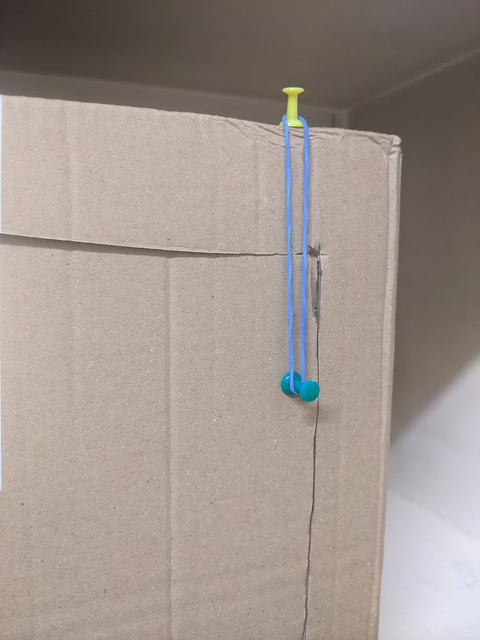