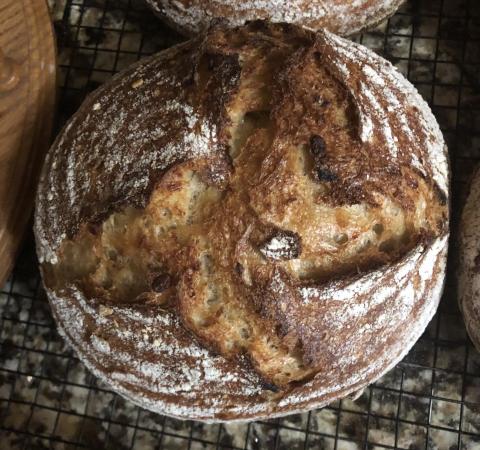 For this one, I figured using just the Einkorn and the Barley were boring so I tossed on some locally made beer. I don’t know if it was the beer, the lower hydration, the sticking to under 12 hours for the refrigerated proof or removing the loaves from the fridge 20 minutes before popping them in the oven, but wow! Did I ever get fantastic oven spring! Probably the best oven spring I’ve had for a long time!

1. Take 18 g of refrigerated starter and feed it 18 g of filtered water and 18 g of wholegrain flour. Let sit at cool room temperature for the day.

The two nights before:

1. Feed the levain 36 g of water and 36 g of wholegrain rye flour. Let that rise at cool room temperature for the night.

1. Feed the levain 72 g of filtered water and 72 g of strong baker’s flour and let rise until doubled (about 6 hours).

2. Place into fridge until the next morning.

1. Measure out the stated amount of einkorn berries, and mill them on the finest setting of your home mill.

2. Place the required amounts of the einkorn flour in a tub and add the unbleached flour to it.

4. Make the barley porridge and cook until thick. Cool and refrigerate overnight.

1. In the morning, take the porridge and the levain out of the fridge to warm up before being used in the dough.

2. Using a stand mixer, mix the water with the flour, and mix on speed 1 until all the flour has been hydrated. Let this autolyse for a couple of hours.

3. Once the autolyse is done, add the salt and the levain to the bowl. Mix on speed one for a minute to integrate everything, then mix on speed 2 for 4 minutes. Einkorn apparently doesn’t like being overmixed. In the meantime, add the extra water to the barley porridge to loosen it.

4. Add the porridge and mix on speed 2 until they are evenly distributed. This should only take a minute or two.

5. Remove the dough from the mixing bowl and place in a lightly oiled covered tub. Let rest 30 minutes in a warm spot (oven with lights on).

6. Do 2 sets of coil folds at 30 minute intervals and then more 2 sets at 45 minute intervals, and then let the dough rise to about 30%. Total bulk took a lot longer than expected because one of my oven lights (there are two in there) died. I was wondering why the dough was still cold at the third coil folds. Thankfully, hubby keeps spares around and replaced it right away. So any stated time for bulk would not be accurate so 30% rise is what you will need to go by.

7. Tip the dough out on a bare counter, sprinkle the top with flour and divide into portions of ~740 g. Round out the portions into rounds with a dough scraper and let rest 30 minutes on the counter.

8. Do a final shape by flouring the top of the rounds and flipping the rounds over on a lightly floured counter. Gently stretch the dough out into a circle. Pull and fold the third of the dough closest to you over the middle. Pull the right side and fold over the middle and do the same to the left. Fold the top end to the center patting out any cavities. Finally stretch the two top corners and fold over each other in the middle. Roll the bottom of the dough away from you until the seam is underneath the dough. Cup your hands around the dough and pull towards you, doing this on all sides of the dough to round it off. Finally spin the dough to make a nice tight boule.

9. Sprinkle a  mix of rice and all purpose flour in the bannetons. Place the dough seam side down in the bannetons. Let rest for a few minutes on the counter and then put to bed in a cold (38F) fridge overnight.

1. The next morning, heat the oven to 475F with the Dutch ovens inside for 45 minutes to an hour. Turn out the dough seam side up onto a cornmeal sprinkled counter. Place rounds of parchment paper in the bottom of the pots, and carefully but quickly place the dough seam side up inside. I always set the oven on a timer the night before so I can sleep in for the hour the oven is heating. Well I woke up with a start thinking I’d over slept and ran to get the loaves out of the fridge. Actually I hadn’t overslept and the loaves sat out for about 20 minutes while the oven finished heating for an hour. 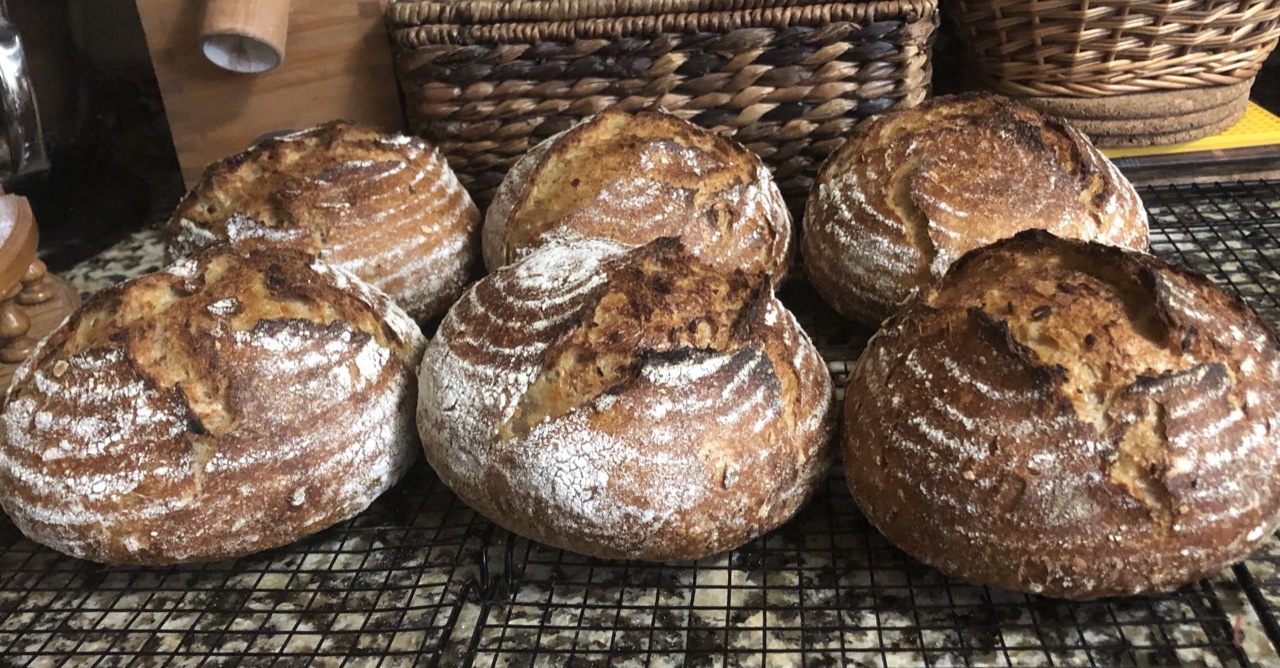 Those are gorgeous loaves, Danni.  That blend of ingredients should taste stellar, too.

So I have no idea on how they taste. I might have to bake a batch just for us.

Those look amazing Danni, I’ve been seeing a lot of beer sourdough breads lately, how much can you actually taste the beer?  I actually don’t like the taste of beer but so many people have said that beer in sourdough tastes great.

I generally don’t care for the taste of beer either but it is actually very nice in bread. Give it a shot!

Great Danni, I will add it to my list of things to bake, thanks.

I love adding beer to bread also.  I’m sure this flavor combo was a hit with your customers.