Michigan's deer season opens this coming Sunday, November 15.  My brother-in-law and some of his cousins will set up camp on Friday and Saturday, continuing a tradition begun by my late father-in-law.  Accommodations are rather Spartan, in the form of a converted school bus.  I've volunteered to bring bread as my contribution to the groceries for our stay.

Knowing that one of the cousins is very fond of pumpernickel, I baked a loaf of Westphalian Pumpernickel from Stanley Ginsberg's The Rye Baker.  It is an extremely dense bread, since the only leavening is from the steam that the bread produces during its 24-hour bake.  The ingredient list is very short: coarse rye meal, water, salt.  That's it.  The bulk of the rye meal is incorporated with boiling water in a scald.  After sitting for a few hours, the remainder of the rye meal and the salt are mixed in.  This is one of the rare breads for which I use my KitchenAid mixer and it's a really good thing that I have a 7-quart model.  The rye paste receives a 20-minute mix, which is way more than I would want to attempt by hand.  Then it's into the pan and into the oven.  It turns out that this oven has a safety feature that switches the oven off after 12 hours, so I had to restart it before going to bed.  The resulting bread looks very much like the picture in the book.  That's it in the foreground, 9 inches long and 4 pounds: 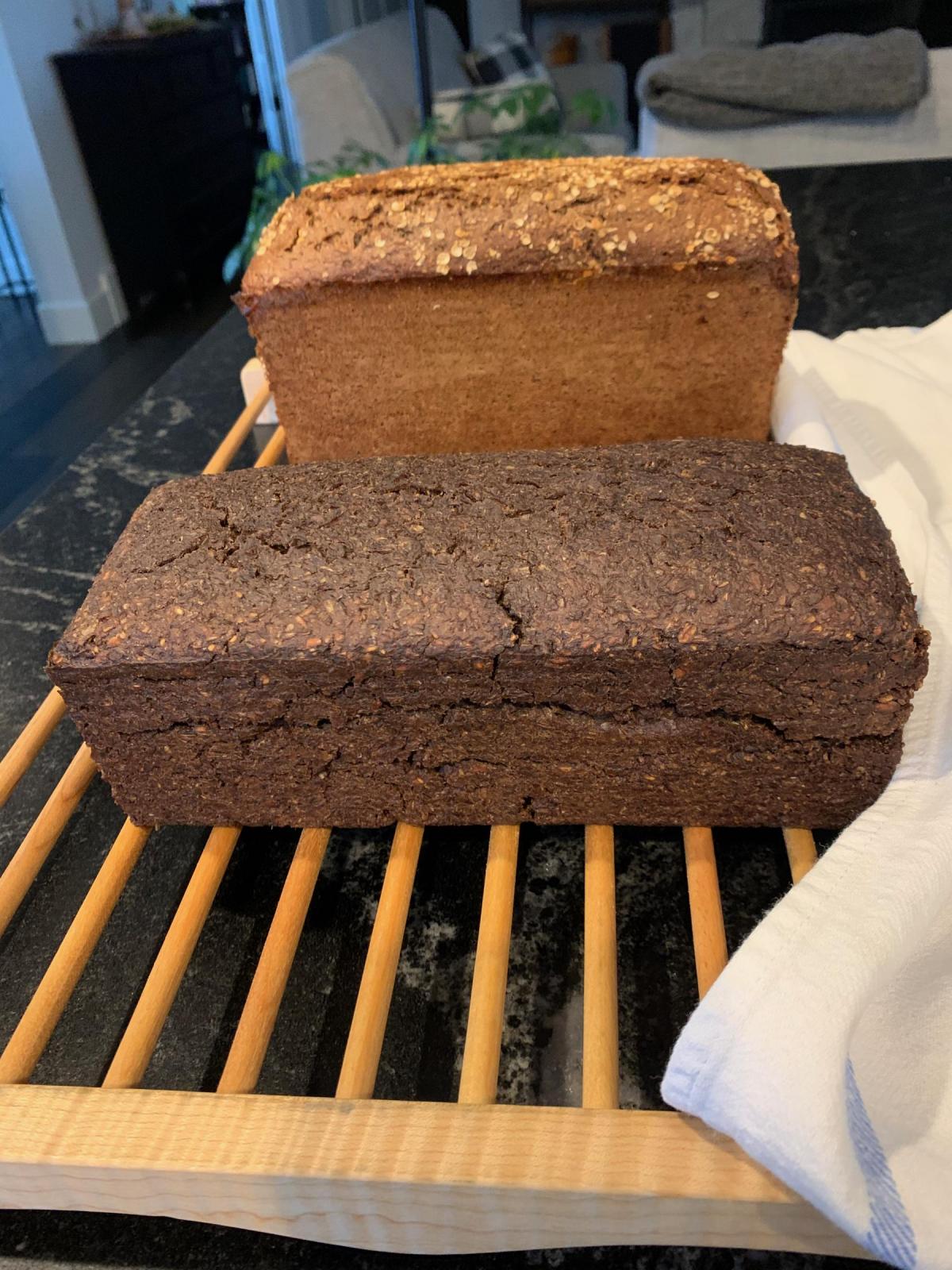 I'm not sure whether the pumpernickel lover is acquainted with this style of pumpernickel, or is more accustomed to the light rye colored with caramel that is often labeled pumpenickel.  We'll see.  Either way, I suspect he'll like it just because it is really good bread.  I find myself picking it up now and then just to marvel at how much bread can be packed into such a small volume.  There are no colorants in the bread.  That deep, dark shade is entirely due to the long, low-temperature (220F) bake.

The other bread in the photo is a Borodinsky Rye, also from The Rye Baker.  In the following photo, the Bododinsky is on the left and the pumpernickel is on the right: 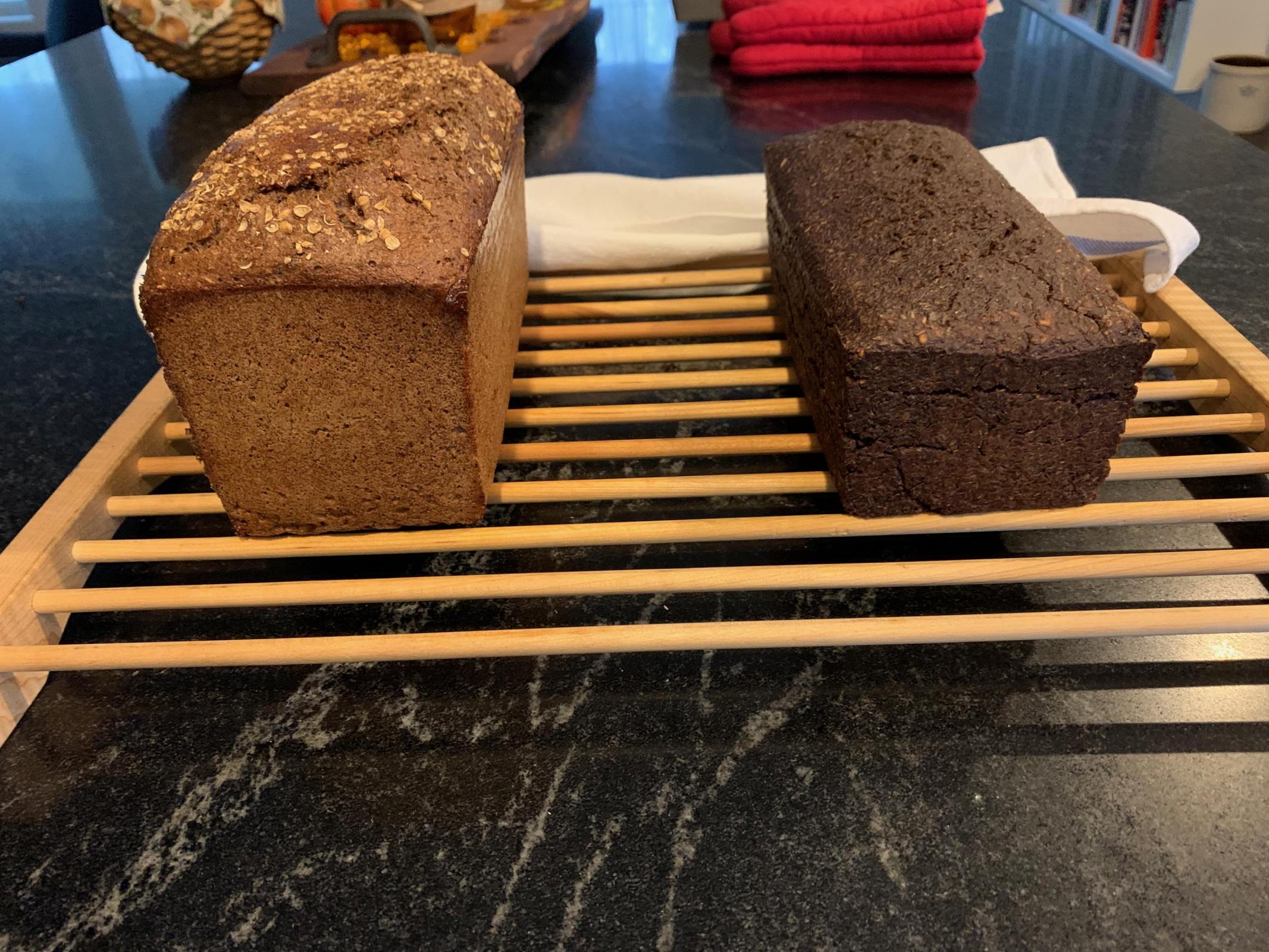 I made the Borodinsky simply because I enjoy it so much.  It's also been ages since I made it previously.  The scald, the sponge, the sponge/scald combination, the rye malt, and the coriander produce a palette of flavors that is unmatched by any other bread.  This is another bread that benefits from using a mixer, rather than mixing by hand.  Since I didn't have fermented red rye malt available, I toasted regular rye malt until it was quite dark, though not so dark as a crystal malt.  When ground, it was similar in color to cocoa powder; sort of a red-brown shade.  Although the bake time for the Borodinsky is far less than for the pumpernickel, there's almost as much elapsed time from start to finish, given the timing for the different stages.  The fragrance that permeates the house while this bakes is heavenly.  I'm very pleased with how the bread turned out, at least in appearance.  It rose well with no signs of shrinkage or collapse after baking.  The real proof will be in the eating.

I plan to slice both of these breads either Friday or Saturday before going to camp and will try to remember to get crumb shots then.

The third bread that I made is a simple potato bread from Clayton's Complete Book of Breads.  There might be somebody at camp who isn't into hearty rye breads, so I figured a soft white bread might be a good thing to throw in.  As with the others, I'm pleased with the bread's appearance: 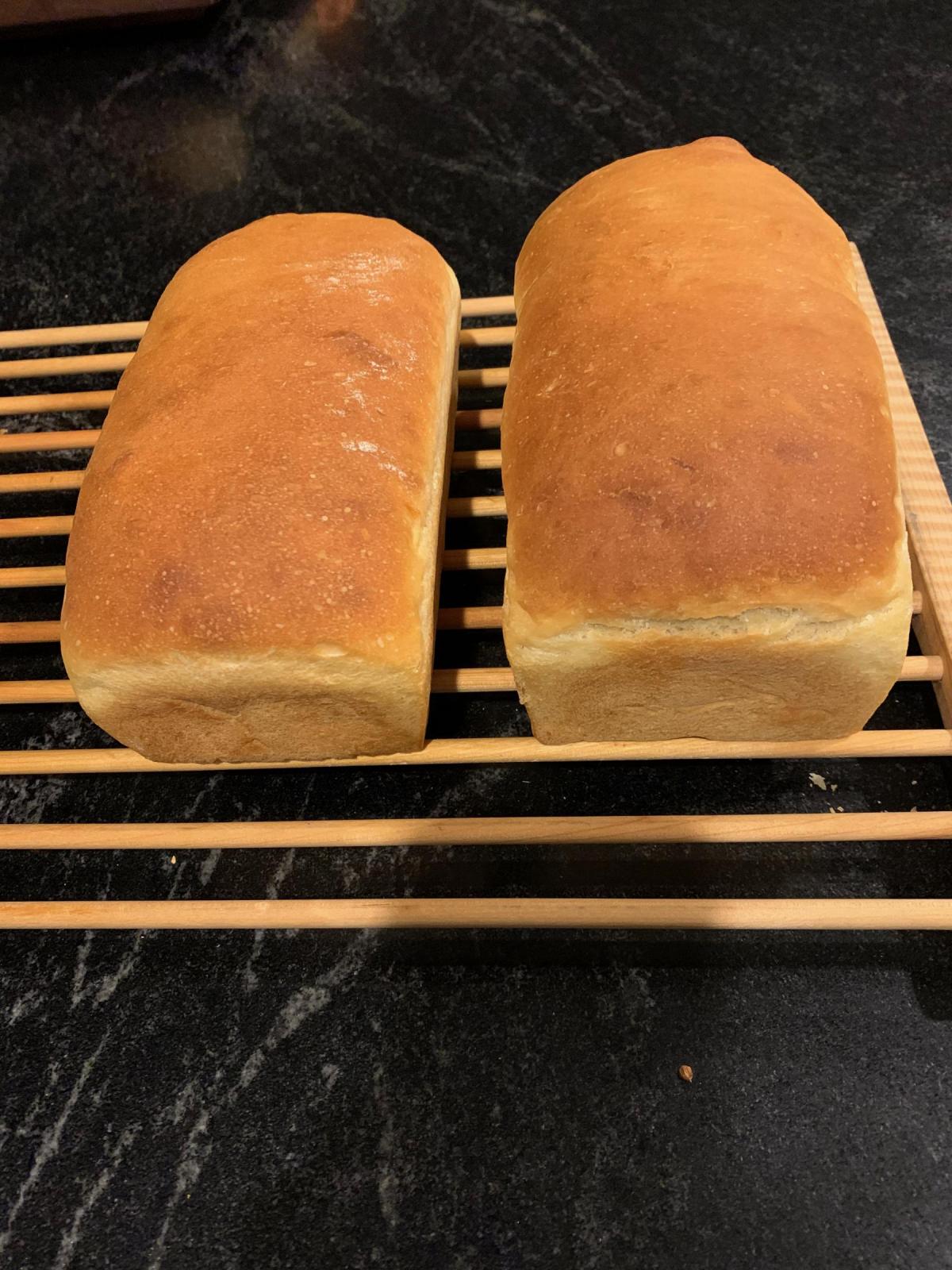 That's this week's baking.  Though there have been other recent bakes, like the stollen that are ripening for Christmas, I wasn't so diligent about getting the camera out to record them.

Since the refrigerator and freezer that we ordered in February still haven't been delivered, my hunt this year will be conducted with a camera instead of a rifle.  The current delivery forecast for the appliances is sometime in January.  Maybe.  If I get some good pictures, I'll share them. 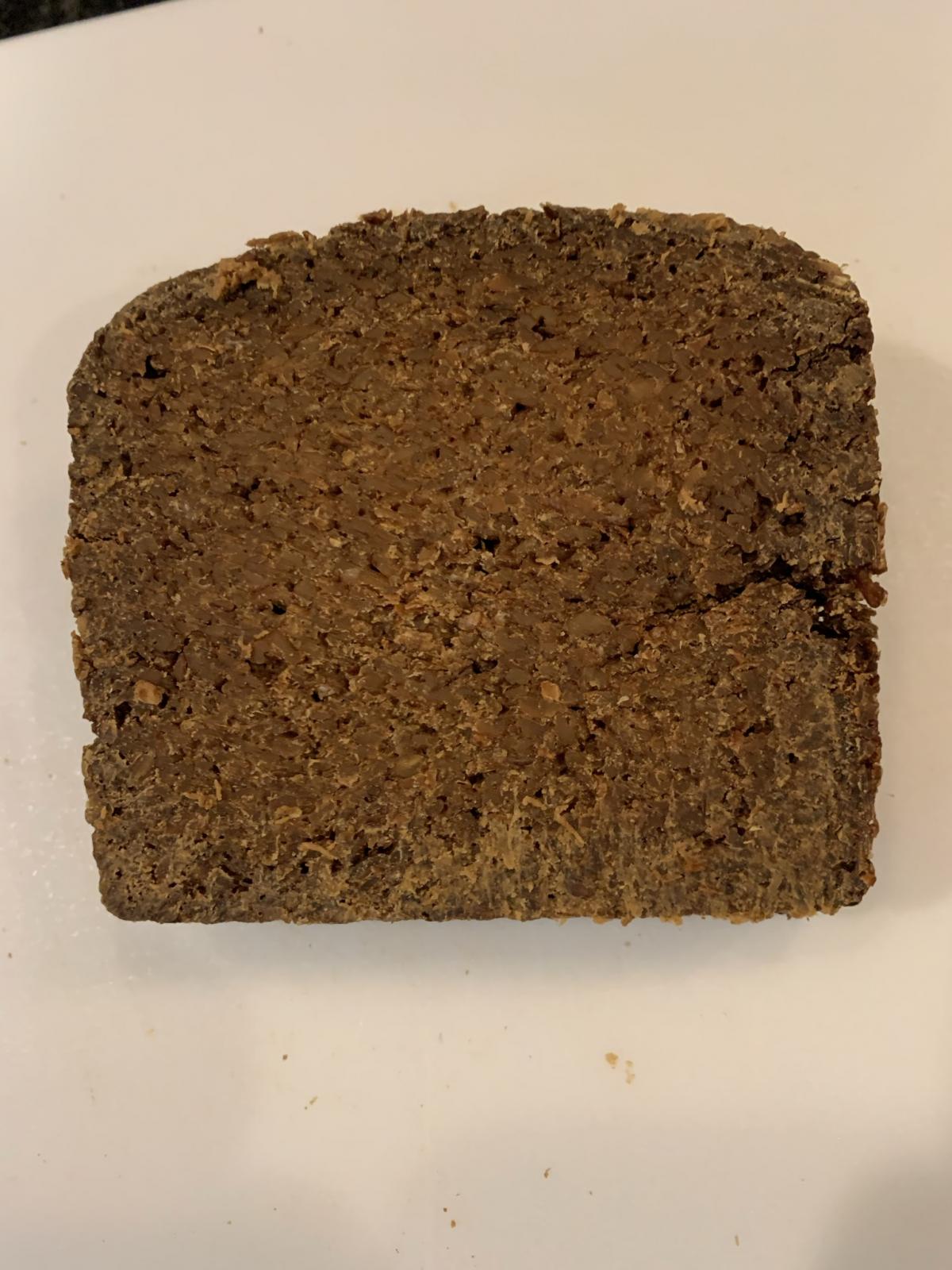 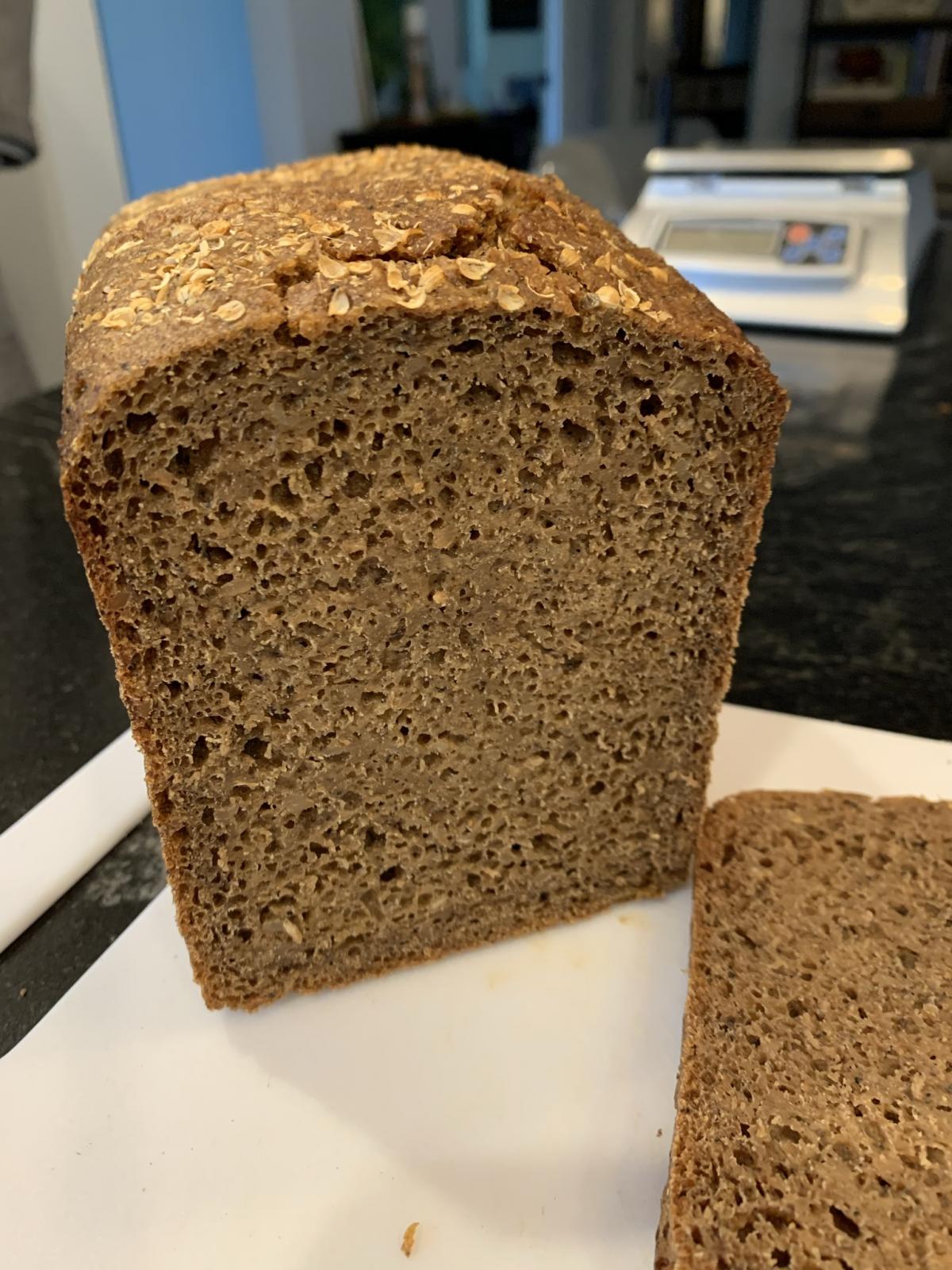 Very impressive rye breads, and the unusual pumpernickel is very interesting. Please share a crumb shot if you manage to take one before its eaten!

Did you top the Borodinsky with oats?

According to the Mark I eyeball, they're only about 1/8 inch, or 2-3mm, diameter.  I harvested them from my garden after the cilantro had bolted and ripened.

where a good cook/baker is revered as much as a successful hunter.

The menu and who cooks what are a well-worn groove for this group, so I don't know that my contributions will extend beyond these breads.  And that's fine, since there isn't an oven at camp.  This lets me have my fun in my kitchen and then enjoy the results at camp with the others.

These all look terrific Paul.  I’m sure your group is going to enjoy it!

I hope that they do.

I’d love to see your stollen sometime as well.

While the stollen will be tasty, they aren’t nearly as pretty as I would like.  They slumped while baking more than they have in previous years.  And they should have been pulled from the oven a few minutes earlier.  I was distracted by other tasks and didn’t watch them as closely as I should.  It may be that the new oven runs a few degrees hotter than the old one did.

New ovens take a while to figure out don’t they.  Enjoy your time with your relatives.

How were your various loaves received?

Indiana used to forbid modern rifles for deer hunting.  It used to be only shotguns with slugs, muzzle-loaders, and archery.

With Indiana being a corn-growing state, our deer are well-fed and huge.

I've bagged only one deer my whole life. I accidentally knicked his stomach when field-dressing, and you could tell he had recently gorged on a corn field.

Our DNR is issuing "bonus" permits like crazy in order to reduce deer population.

Windy, rainy, raw.  Neither deer nor hunters were very active.

The are where our group is hunting can take either a buck, with at least three points on a side, or a doe on a regular license.  It used to be that a separate doe permit was required.  The herd is populous enough that the DNR wants to draw it down.

There are a lot more seasons and weapons allowed now than there were 50 years ago when I was first a Michigan hunter.

The pumpernickel has been well received, while the Borodinsky is a big hit.  We haven’t gotten to the potato bread, yet.

With so much farm land turning into suburbs, one would think wildlife would be on the decline. In the aggregate, that might be true.

But the countervailing trend is that the decline of hunting as a social tradition has caused an increase in some game animals such as deer.

Here in Indiana, our DNR (the state's Dept of Natural Resources) is promoting and making it easier to hunt deer, coyotes, and feral hogs due to the booming population of all three.

Feral hogs are a big problem in Texas and Florida. If I recall correctly, those states do not require permits for feral hogs and have no bag limits. That's mainly because of the huge amount of crop damage the hogs do.

None of the hunters got a shot off at a deer. Actually, very few deer were seen at all.  We had some great breakfasts.  There were stories.  There was beer.  Planning the summer fishing trip started.  Our abode was a yellow school bus that has been repurposed for deer camp with some bunks, a woodstove for heat, a propane cooking stove, a sink, a table, and seats.

I took gobs of photos, some of which I posted to my Facebook page, which are way more interesting than any stories: