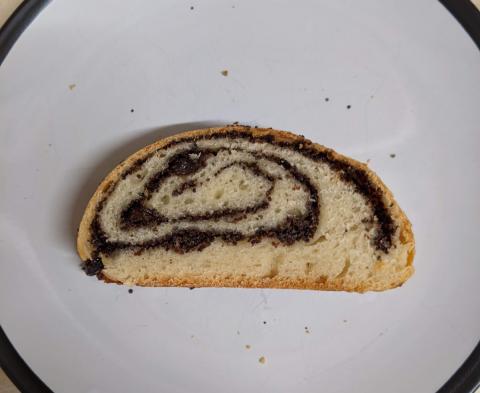 My grandma every year makes yeasted homentaschen poppy seed pies, and they are delicious. Last year I asked her for the recipe, and made them myself, and it worked great, despite having no prior experience with yeast myself back then.

Since starting bread baking, I wanted to convert it to sourdough, and since I am now maintaining a stiff starter for ciabattas, which is great for enriched dough, I thought this was the right time. I converted all the measurements to grams from cups, and measured how much flour it took for me to reach the right consistency (since the instruction was to add however much flour it takes, "until the dough can hold its shape, but still soft"). Here is the scaled down version I used now, from the original recipe based on 1 litre of milk: https://fgbc.dk/108f

I built the levain fo this bake from 5 g of refrigerated starter over two feedings, and on the second one it at least tripled.

The process is as follows:

Combine milk, butter, oil, sugar and a pinch of salt in a sauce pan, and heat up until butter and sugar dissolve. Making sure the liquid is not too hot, combine with the starter and homogenize (I used a hand mixer). Then start adding the flour, until "the dough can hold its shape, but still soft", which was the specified in the formula amount for me. Then in the original yeasted recipe it is left to double, and punched down, and that is repeated a couple of times. Instead, I developed the gluten a little with 50 slap&folds, and then left it untouched until significantly risen, around 30%, took 3 hrs for me (no aliquot jar, just in a rectangular container, so very approximate estimate). Then, since it's not the season for homentaschen, I simply made a roll with the poppy seed filling (let me know if you want the recipe for that, but it's not just poppy seeds, much better than that). Rolled out the dough with a rolling pin into ~0.5 cm thick rectangle. Then spread the filling and rolled it up carefully, being quite tight with it. Next time I would split it into two logs, since this one was super long - it barely fit into my biggest baking tray diagonally! Or a shorter, but thicker one. 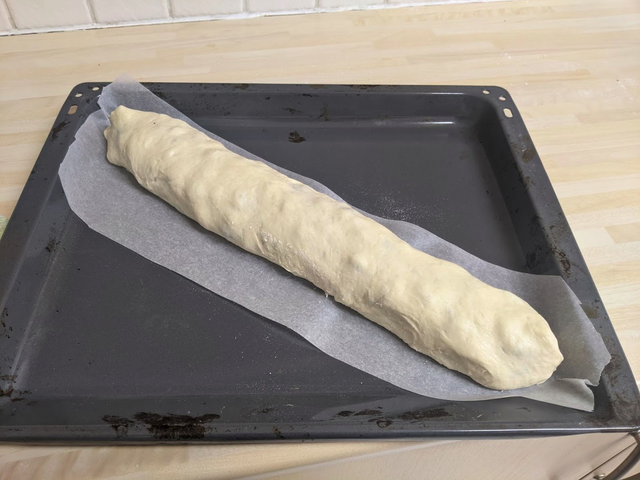 Then I proofed it until visibly grown, around 1-1.5 hrs. In the final 15 min preheated the oven to 180°C. Then made an egg wash (one egg, a splash of milk, and a little sugar), and covered the whole roll with it. Then sprinkled some poppy seeds on top for decoration, and covered with another layer of egg wash. Then baked in 180°C oven until beautiful outside, took 45-50 minutes.

Here it is cooling down after baking, and doesn't fit on the cooling rack: 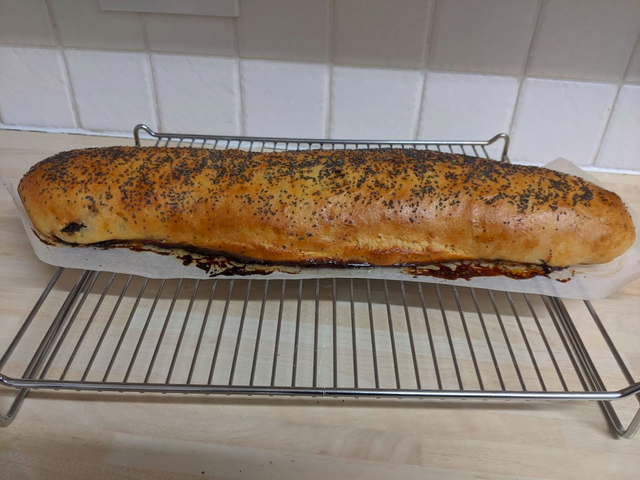 And here is a slice across: I think next time I'll use 1/4-1/3 of the dough for some cinnamon rolls, and will also be more careful to roll it evenly. Also should have let the filling warm up before using, there is clearly a thin layer of dough that is a little dense right next to it, and I guess it's because it cooled down from the refrigerated filling I made a day earlier.

But overall I am pleased with my first attempt at converting a yeast recipe to sourdough, and it's delish!

For the filling, you need:  That's it! And this can be made in advance, like the day before (but see my note in the post about bringing it to room temperature if it was refrigerated). Also, after getting deeper into the roll, I think the dough/filling ratio is actually great, and I just need to distribute it better to the ends :)
Share

For a recipe you've converted yourself this looks exactly like a poppyseed yeast cake from my childhood. This brings back memories. Well done Ilya. If I saw this in a bakery I'd certainly be buying it. Enjoy!

Thanks a lot Sean of the Bread, that's better feedback than I could hope for when sharing this!

That looks delicious Ilya, that’s great for your first time converting a yeasted recipe to sourdough.  I still haven’t attempted that yet.  Great baking.

Thanks Benny! And the taste is so similar to the original, I don't really taste any significant sourness.

Seems like converting is not that difficult! Just swap the yeast for the starter, choosing your preferred inoculation % (I think this was the most mysterious choice for me previously, but now with more experience it's easier), and adjust hydration.

I could definitely eat that!

Howevert if you want to try it, I have just added the recipe for the filling too, since I translated it for someone since posting in the blog.

Somewhere, someone in my childhood made this...I can almost taste it.  Thanks for the recipe, I'll bookmark and make it closer to the holidays.  Also - thanks for the poppyseed filling recipe!  Two for one!  Happy Baking!

So happy this is bringing childhood memories for people here. Hope you bake it and share your results, and how you like it!