I've tried Maurizio's ciabatta recipe before the CB 3 times, and was never satisfied with the result. So was quite keen to sort it out.

Over two feeds I converted my 100% hydration rye starter into a 50% hydration BF starter. I found it tricky to monitor fermentation in it, since the growth was with such low hydration is not that obvious... So if i am being honest, I couldn't be sure in the strength of the starter, bit just went ahead hoping for the best. I made a ~50% hydration biga in the evening and let it ferment for 13 hours at RT (which is higher than recommended 14-16°C, but overnight it probably got close to that). Here is what it looked like: 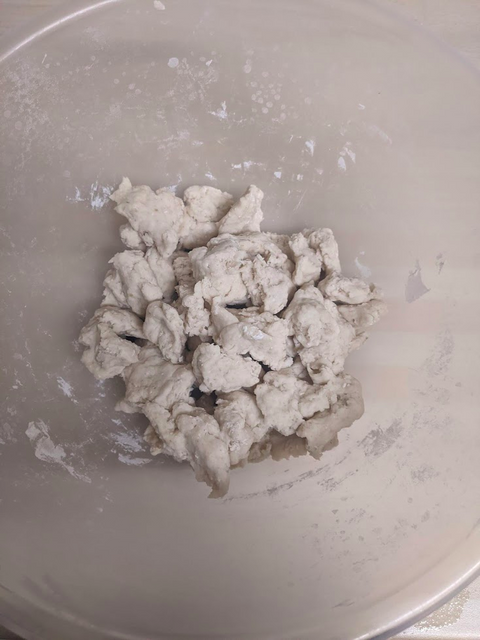 Here is what it looked like in the morning when I was about to use it (the whiter parts is where I poked it a bit to see what was going on): 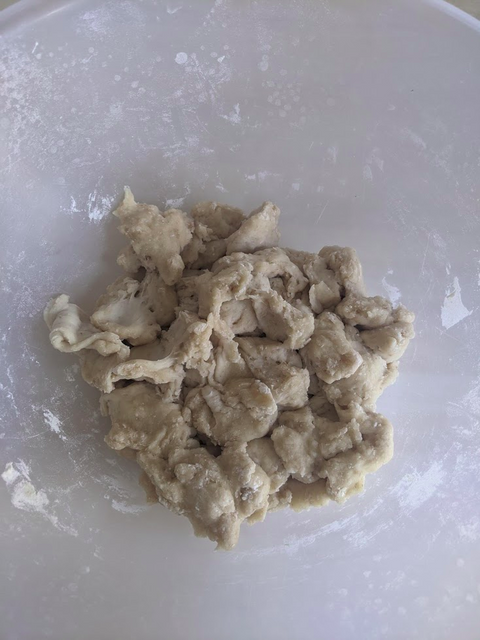 It certainly got much softer, but didn't have a particularly strong smell, slight acidity.

Then 1.5 hrs bulk after that. Dough felt light and puffy, but not bubbly.

Divided in two and shaped into rough tubes, similar to what was shown in a video above.

Here they are on the couche: 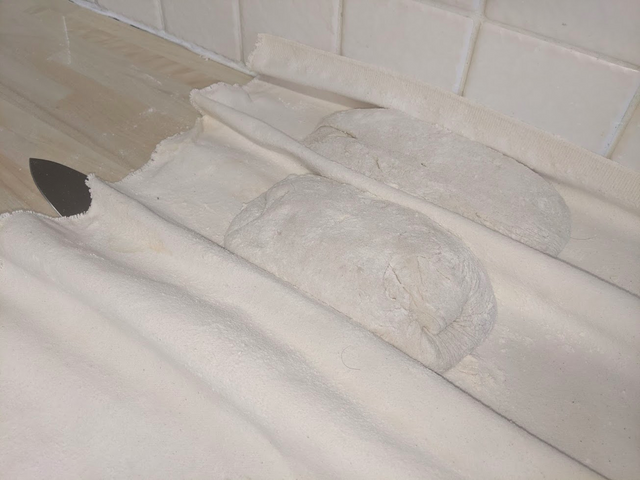 Proofed in the fridge for a bit due to life, then took out and proofed for a bit more, until (I think) it was mostly done, and preheated the oven.

Stretched them out when moving to the peel, dimpled with fingers and baked with steam at 250°C on steel. Here made one of the stupidest mistakes and pushed one ciabatta too far and it partially slid off the steel... So the end was hanging off, stretching with heating and eventually burning off, very sad.

Baked for 20 min with steam and further 17 min without.

And here is what I got, not very exciting - you can see the burned end on one of them: 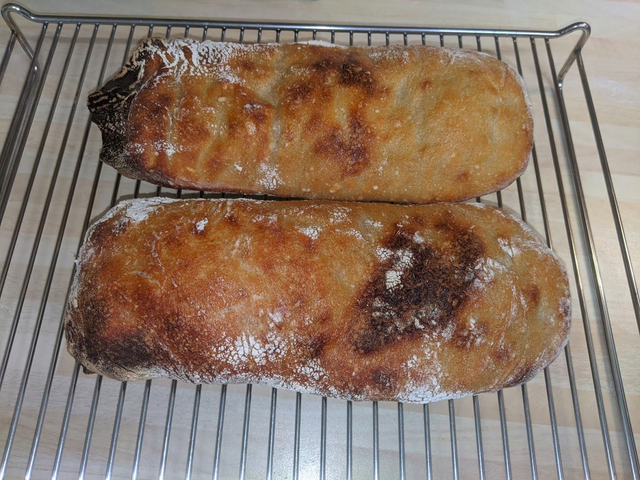 And here is the crumb from the one that I pushed too far: 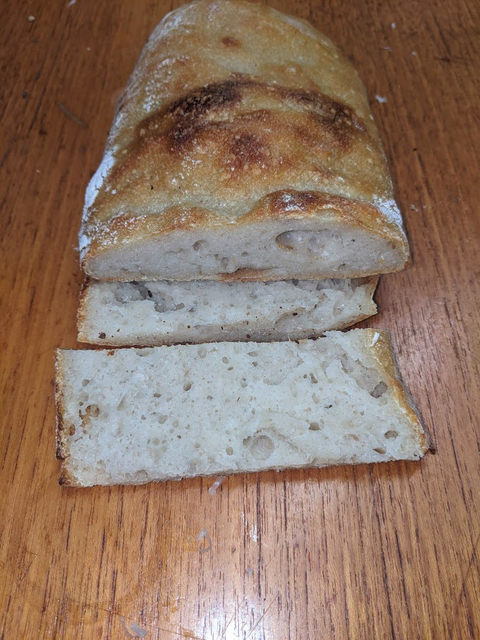 I'll share if the other one, or the other end of this one, looks different.

Taste is quite nice, the crust is thin and somewhat crispy. But is it even ciabatta? Not very open at all!

Ilya's bake #2. Still not a ciabatta

Well, this is proving quite a challenge for me. Sorry for the long read, but wanted to provide as many details as I can.

As I mentioned above, I made a biga with weak 00 flour, which was immediately suggested to be a mistake. I only kept it at cool room temperature for a few hours in the evening, and then put in the fridge overnight. In the morning took it out and let warm up a little, and then mixed the final dough using bread flour and warm water (and salt). I had 77% prefermented flour, biga was 50% hydration, final dough was 75% hydration: https://fgbc.dk/vro

Making the biga was easy, but mixing the final dough by hand with so much 50% hydration biga is a real problem. I did it as best I could, and then did 100 slap&folds after a 15 min rest. At first it looked really nice and the dough was gaining strength, but then it just suddenly lost any structure and became very slack. I think it's quite a common progression with slap&folds, but it just wouldn't strengthen back and was getting really messy, so I just stopped and let it rest for 15 min. Then I did a set of strong stretch&folds, and left for 30 min again; this was followed by three more sets of stretch&folds spaced out by 30 min, and the in the en the dough was really smooth and strong enough for a windowpane.

Since mixing the final dough, a problem of lowly hydrated clumps were a problem. I had the same issue the previous time, and actually I could occasionally find particularly dense areas in the final bread, that must have come from these clumps. So I decided to fight them more thoroughly. While the dough is very weak it's really difficult, so I thought I'd keep pulling out small parts of the strengthened dough and squash those buggers to incorporate them. And around halfway doing it I realized I was probably really not helping the gluten that I developed this way, and was damaging the structure. But I felt like I had no choice, and just finished doing it.

Then I left the dough by the window for a slow bulk ferment without touching it, for around 2.5 hours. It was in a flat container that was a little too big, so it continued to flatten out during this time, but didn't actually cover all of the bottom surface, so it wasn't that badly soupy, I thought. But also because of that I couldn't really judge if there was any significant rise during this time (should have used an aliquot jar!). Then I gently scooped the dough that spread out, back to the main bulk of it, and turned it out onto a generously floured surface. I then divided the dough in two, and gently shaped into tube shaped, and placed on a couche upside down, and left to prove at slightly warmer temperature, around 25°C. When handling the dough is seemed OK - not impossible to handle, although didn't feel particularly strong either. What worried me more is no observable bubbles on the surface after bulk.

And no bubbles appeared during a rather long ~3 hour proof, and I couldn't see much rise happening. The poke test seemed to show some progress though, so I preheated my baking steel at 230°C and baked with steam for 15 min, and without for around 20 min. The dough was extremely soft and extensible before loading. I tried to stretch it a little when transferring onto the peel, and it just went all the way, I could barely fit it onto the peel and the steel.

And here are the results. 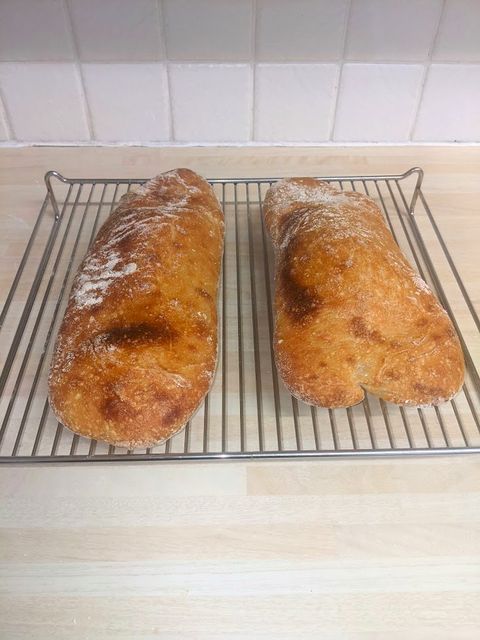 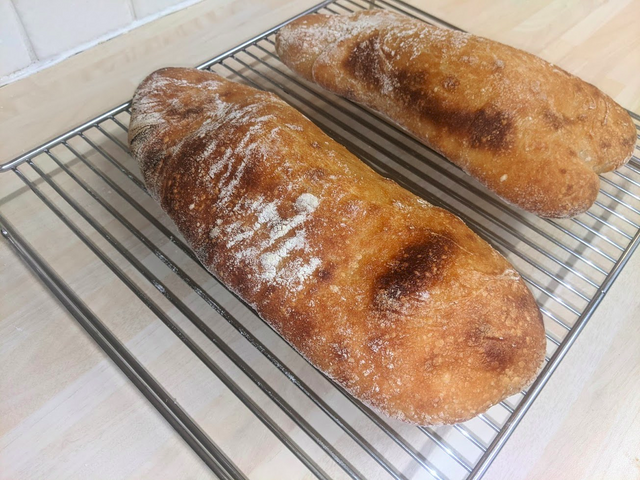 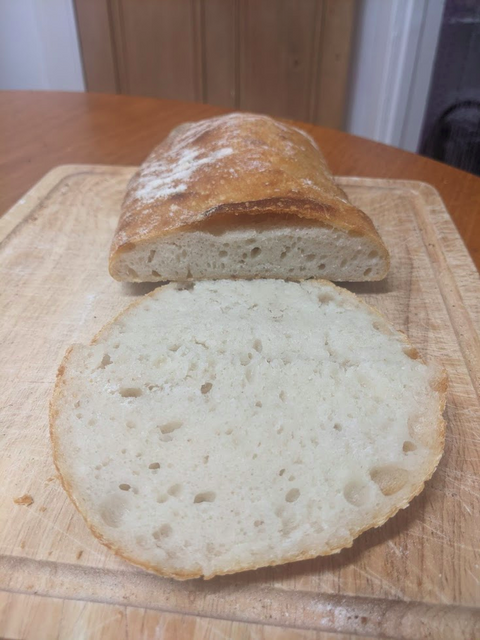 The crumb is very white, compared to my usual bakes - must be from the 00 flour. Crust is hard and crispy. Tastes nice! Much less acidic this time, maybe I detect a slight hint of sweetness. Crumb is a little moist, but not dense - although closed. Bubbles on top, again.

I decided to reduce the prefermented flour, and use only bread flour. Also added a little olive oil. Formula: https://fgbc.dk/1025

Made biga in the morning and left by the window all day - measuring the temp, it as i the perfect range 16-18°C. Moved it to the fridge in the evening.

In the morning mixed it with most of the water for the final recipe using a hand mixer on top speed. That worked well, took a little while, but at least no hard hand work, and no annoying clumps in the end. 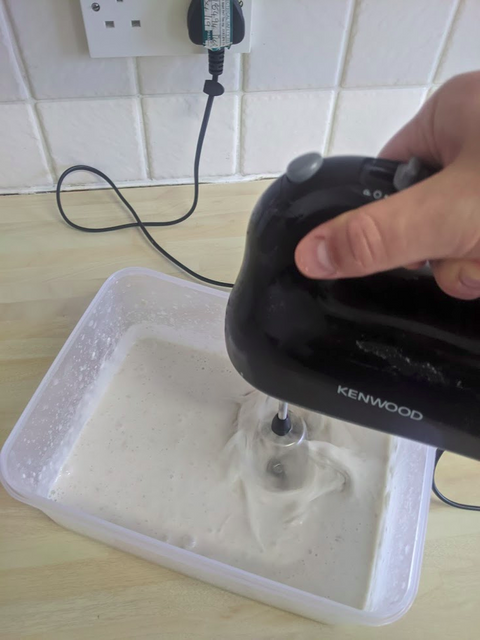 3x stretch&folds with 30 min rest, placed in a bulking container and bulk fermented until >50% rise (starting from after stretch&folds), took a while, around 4 hrs - all in all 6 hrs. Dough was very jiggly, felt very light and airy, certainly ready, maybe over even?

Did an experiment for the final shaping for the bake: gently stretched on of the breads, and dimpled another.

Unfortunately got barely any oven spring: 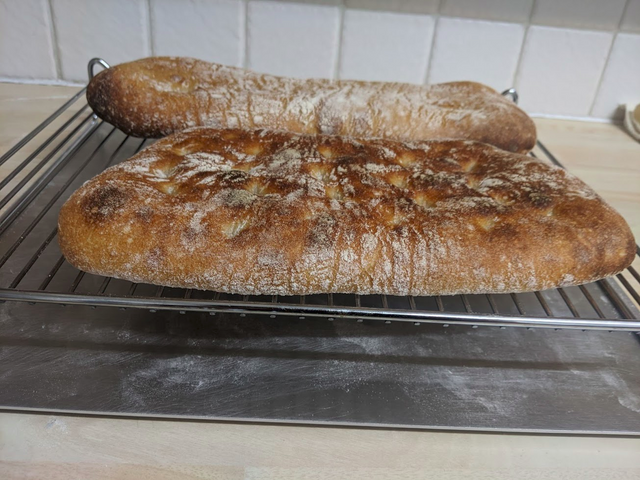 And the crumb is not particularly open: 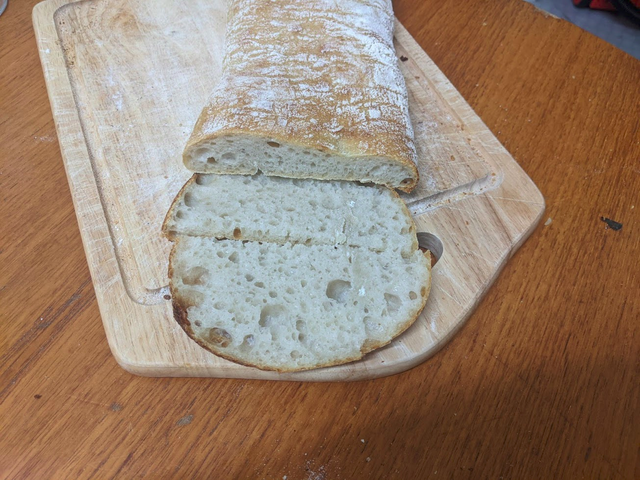 Even more surprisingly, the crust is not crispy! Just mostly soft, only crispy in some darker spots on the ends that seemed to bake a little quicker. Never had a crust like that on any bread, at least in the first few hours after baking it's always crispy.

So, did I overferment the dough in bulk? Shouldn't forget about an aliquot jar next time, not used to it, but would be very useful...

Also I think I didn't preheat the steel enough, I was afraid of overproofing and rushed it a little. The bottom is a little pale.

For all my CB Ciabatta bakes, see http://www.thefreshloaf.com/node/66311/community-bake-ciabatta

Well-well. Didn't expect that, but I finally produced ciabattas! The bake that I mostly winged without much planning, and hey-ho, the best result by far.

I basically followed my previous bake almost exactly, except I omitted the oil, and maintained the originally planned weight of 800g total. Formula here: https://fgbc.dk/113c

The only major difference was the flour. I used Caputo Couco 00 flour, 13% protein, instead of my normal bread flour (12.3%).

Fermented the biga overnight (which must be approximately the right temperature), for ~13 hours. Then mixed the dough. Dissolving the biga and making the dough come together and develop the gluten was the messiest process of any bakes I've had. Using a hand mixer for the biga splattered half the kitchen with floury water, and trying to slap&fold this dough (even not at full hydration) created the stickiest pile of goo on my counter. In the end I figured out that Rubaud mixing was perfect for this dough, and it was all good. Then did 3 sets of stretch&folds spaced by 30 min, and then... I forgot about it! Hasn't happened before, but I got into the zone with some work, and just didn't realize how the time passed. In the end the bulk lasted around 6 hours (quite a lot of it was spent on the initial struggles to mix the dough properly). Surprisingly, the dough wasn't overflowing at all, it wasn't that hugely risen even. It was clearly jiggly and had some bubbles, but not as much as I expected after this length of time.

Anyway, I just roughly and gently divided and shaped the dough into two ciabattas, and proofed on a couche. And again it didn't seem like much was happening (I generally don't notice much change during proof time with any dough really, not sure what's going on), so I baked after 1.5 hrs final proof - 15 min with steam, 15 min without (and convection on for the last 5 min to gain some more colour).

And here is what I got - not very impressive, even a little split on top, but let's say I was going for rustic! And I did get some oven spring, which is a big improvement already. 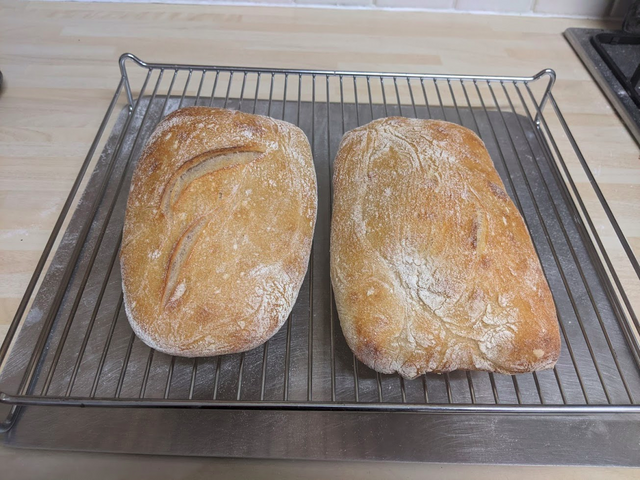 What was more exciting was inside! 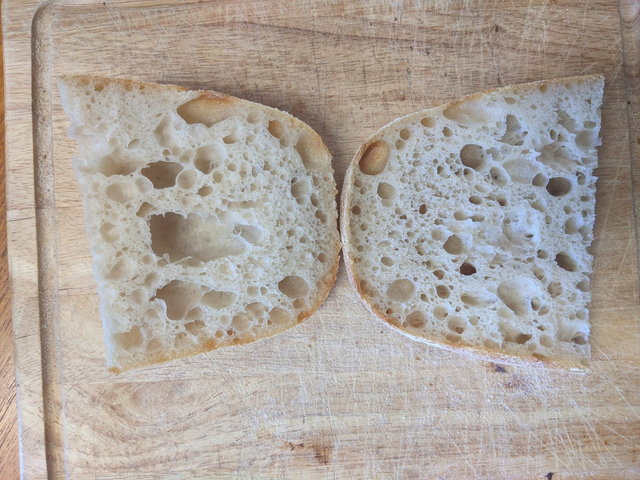 Finally I got quite an open crumb! The crust is still a little crispy this morning, and not too thick. Tastes great too. Perfect for horizontal slicing for sandwiches (which is what I had for breakfast, with Camembert and some Polish ham).