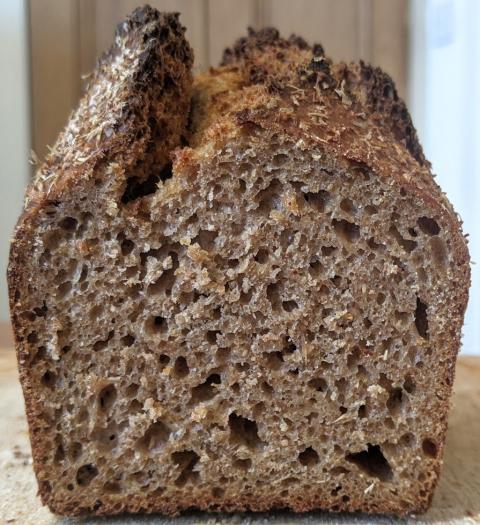 I feel like I keep going through Maurizio's recipes. They are so nicely written up and presented, it's difficult to avoid the temptation.

I wanted to try to make bread that would really highlight the spelt grain. And at the same time I have been thinking that I've never made any pan loaves (with exception of rye bread, of course). And it seemed like a perfect combination to try: 100% whole spelt pan bread! And of course Maurizio has a recipe for that, so instead of reinventing the wheel I just followed his recipe: https://www.theperfectloaf.com/whole-grain-spelt-pan-loaf/

Here is the formula scaled to two of my small bread pans: https://fgbc.dk/v0l

I simply followed the recommendations as closely as possible. Despite 100% whole grain flour, and the very extensible nature of spelt, the dough was very nice to work with, only mildly sticky, which was easy to counteract with a little water on my dough scraper and hands.

What, however, didn't go as planned, was the proof. I shaped the dough into quite tight rolls, just like I shape for batards, and the top of the dough was barely reaching around half of the pan. And there it stayed for hours! I did not see any visible increase in the size of the dough. I suppose, it slowly filled in the cavities around the dough, so for it to stay the same height it did have to increase in volume a little, but nothing like what I expected, say 50% increase maybe. So I was a little worried, after proofing it for waaay longer than Maurizio writes (I didn't time it exactly, but it had to be over 3 hours instead of 1-2 hrs). In the end it did seem like it passed the poke test though, with an indentation that didn't get fully refilled after a few minutes, so I decided to bake it.

And boy, did I get nice oven spring. Should have scored them, I guess would have gotten even better spring! Very flavourful (100% whole grain, after all!). I'd say the whole grain flavour is less strong than I expected, and nicer than regular wheat. Although I've never tried 100% whole wheat bread. In hindsight, should have added some sesame seeds together with the spelt bran on top, can't go wrong with that!

So I think the verdict is that it's a great bread, but why did it not grow during proof? I have to mention again, I've never made wheat pan loafs, and moreover I always do overnight retard, so probably have a lot to learn on these fronts!

Ilya, those look great.  I haven’t made many pan loaves either.  Since baking sourdough I’ve been concentrating mostly on hearth loaves and then baguettes, I just haven’t gone down the pan loaf road.  I actually like how they opened up randomly themselves on top.

I have to say that your bread looks very very similar to the photos of his.  Did you final proof at a similar temperature to him?  I believe he say he proofed at 76ºF.  Is it possible that your dough wasn’t quite enough for the size of pan you used?

In any event, they look great.

Thanks Benny, I am certainly not complaining, these are fine loaves with great taste! And I don't dislike the random fissures on top either, but if I knew this would happen I would have scored them :)

As far as I understand regarding amount of dough for the pan, it's a sort of trial an error kind of thing, where you have to get used to the pan. But I followed the recommendation of the manufacturer (450-550 g dough for wheat breads per pan - although they say "Plain wheat dough", not 100% whole grain sourdough - and I used approximately 550 g), so I expected it to be in the right range. (https://scotlandthebread.org/product/bread-tins/)

I am not sure exactly about the temperature, but I proofed them in the warm spot in my kitchen which I thought was around 25°C, so expected it to be similar.

If there was space around the dough - the ends especially, which is usually the case as it's tough to shape a dough with perfect corners - just filling the empty space to get to level would probably be a rise of a third, probably at least. As you noticed - nothing to worry about. Enjoy!

Thank you! I guess you are right, and probably with 100% whole grain I shouldn't expect very big rise?

The dough did fit quite neatly into the tins though, not much empty space...

It did produce a nice bread in the end, anyway, so it's all good, just want to learn :)

Whole grains tend to not rise as much as finer grained flours. I find around 30% is where it starts to get noticeable. But as long as you like it it's good. Enjoy!