The motive force for oven spring is often stated to be the expansion of gas cells in the dough, combined with a burst of activity by the dying yeast. However, this is only a part of the story. Gas expansion is unlikely to be sufficient by itself because the expansion of gas from a room temperature of 25° C to 80° C is only about 20%. And a burst of activity from the yeast is likely to be small because gas production declines at temperatures above 40° C. The other important drivers are given by scientific text books as the release of dissolved carbon dioxide as the temperature rises, combined with the boiling off of ethanol, which is also mixed with the water. For example, in “Baking Science and Technology”, Pyler quotes the following approximate contributions, which I have rounded to whole percents:
Ethanol boiling: 50%
Expansion of existing carbon dioxide gas: 29%
Carbon dioxide from solution: 19%
Yeast activity: 2%

That leads to the interesting question of how the carbon dioxide and ethanol come to be dissolved in the water. The answer presumably is that they are already in solution when they are created by the yeast, and remain that way until the loaf is baked. The likely time when this could happen is during the initial, apparently quiescent, part of bulk fermentation before the dough starts to rise. If this is true, the yeast is actively producing carbon dioxide early on, but the gas is not immediately visible because it remains in solution. Eventually, however, the solution becomes saturated and any further carbon dioxide has to be released as gas, causing the dough to start rising.

To explore this idea I conducted an experiment in which I divided a batch of dough into portions and baked them after different lengths of bulk fermentation. I started by mixing 500g of all-purpose flour, 350g of water, and 10g of salt in a food processor for 30 seconds. I removed 100g of the mixture as a control sample, coated it in rice flour to reduce sticking and placed it in a 250ml pyrex beaker. I then added 1.5g of active dried yeast dissolved in 5g of water to the food processor and mixed for 5 more seconds to incorporate the yeast. Then I cut 7 samples from the dough, each weighing 100g. I coated each sample with rice flour and put it in a 250ml pyrex beaker, covered loosely with foil. I immediately put the control sample and the first yeasted sample into a 450°  F oven to bake for 20 minutes. The remaining 6 samples were baked at half hour intervals over the next 3 hours.

The picture shows the beakers after baking, lined up in order of fermentation time, with the control sample on the left. The graph below shows the heights before and after baking. The baked height increases steadily for 2 hours, when it reaches a plateau at about twice the unbaked height. 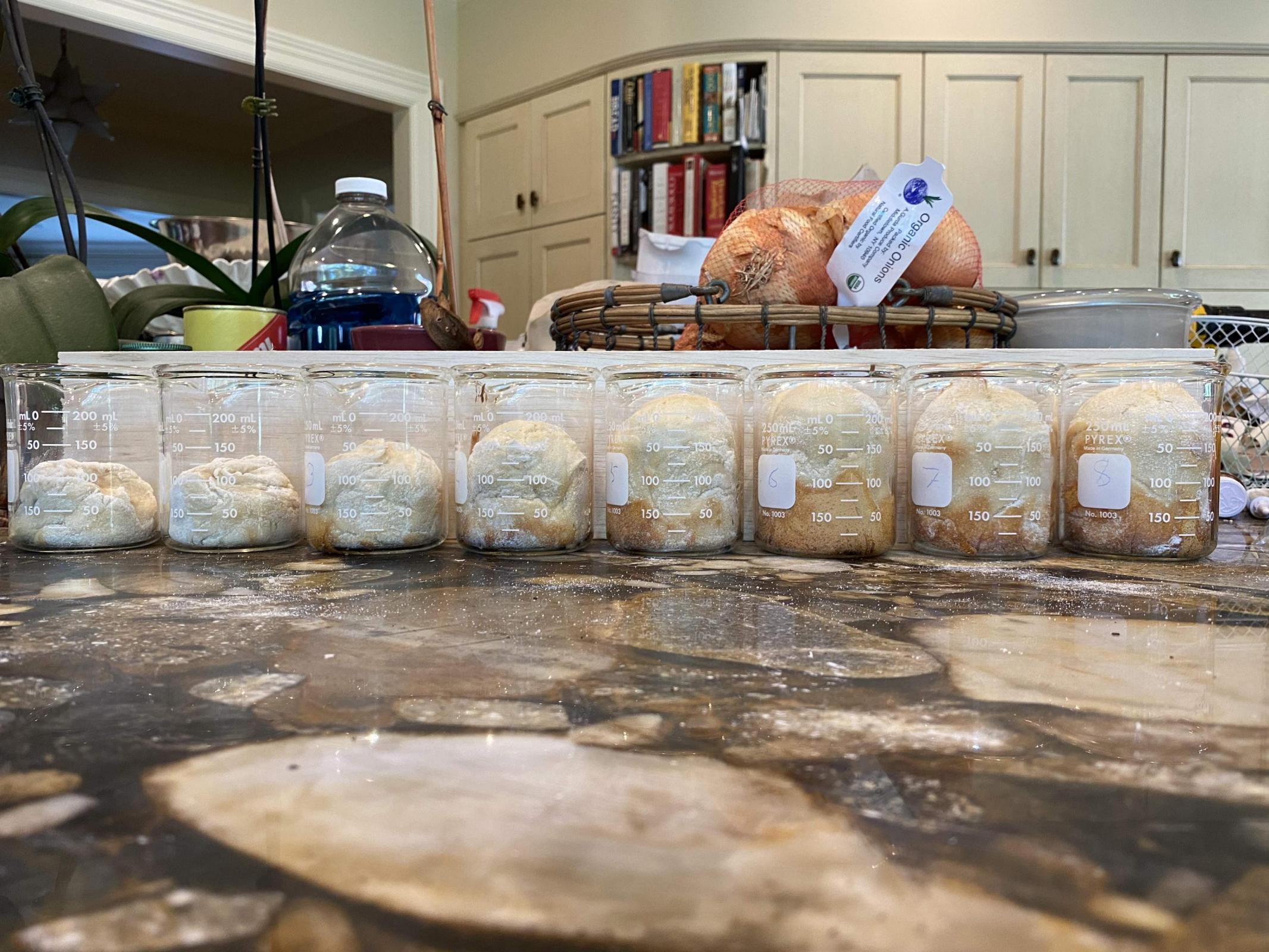 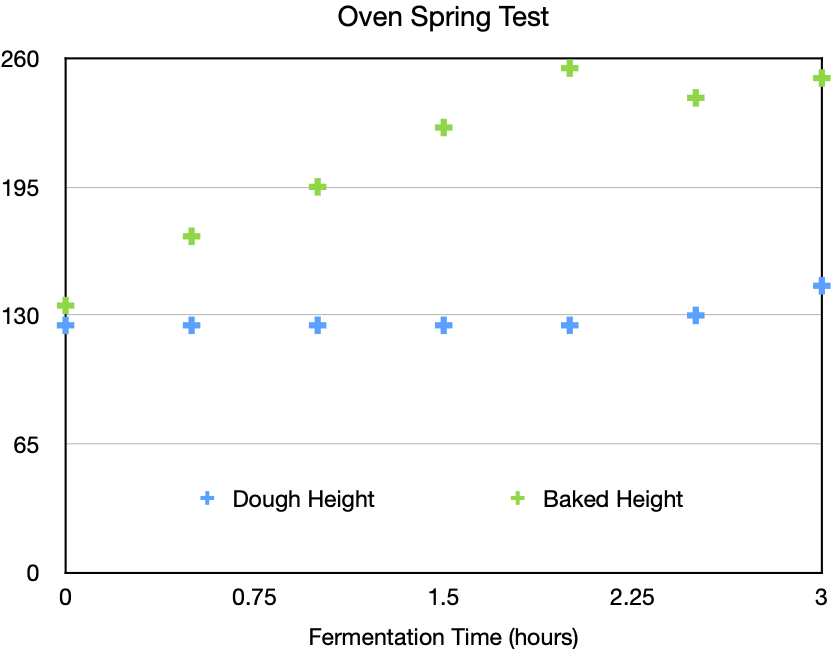 The lower graph shows that the dough height before baking remains unchanged at first, only beginning to increase at 2.5 hours, even though the baked height increases steadily right from the start, consistent with the idea that carbon dioxide and ethanol are present but mostly remain in solution in the dough.

There is no sign of a step increase in baked height which would have been produced by a yeast burst. Indeed, extrapolating back from later samples, the rise in the sample baked immediately corresponds to only about 10 minutes of fermentation at room temperature.

The plateau in baked height after 2 hours most likely indicates a limit to the capacity of this dough for oven spring, since the rise in the unbaked dough after 2 hours indicates that fermentation continues. It would be interesting to run a similar experiment with different kinds of dough handling to see their effect on oven spring.

I love this. Thanks for doing the experiment and writing it up.

Great experiment and interesting information from Baking Science and Technology.  It never made sense to me that the yeast would give much rise during baking, 2% sounds about right or even a bit high to me.  Expansion of gases and boiling off of dissolved ethanol and carbon dioxide contributing almost all of the oven spring makes sense.  Thanks for doing your experiment.

This is cool. Considering higher solubility of gases at lower temperatures, cold retard should increase oven spring! It should be ~2x more soluble at 4°C than somewhere just above 20°. Which I think is consistent with what people observe? Would be nice to test it rigorously.

Similarly, at lower temperatures gas bubbles will be smaller, although I guess effect of room temperature vs fridge isn't huge.

Increased yeast activity doesn't make sense to me too, always thought it was BS. They can't work THAT fast even at optimal temperatures, and oven spring happens in a few minutes of constantly rising temperature, so it's "optimal" only for a very short time.

Lower dough temperature reduces the internal pressure in the alveoli as the CO2 cools down. The lower temperature also increases the solubility of the CO2 so it is less inclined to come out of solution, but Boyles law and solubility are not exactly symmetrical.  CO2 production rate goes down, but solubility goes up so the dough does not rise much during retard.  In fact most of the CO2 produced either leaks out or is dissolved in the dough.  When you go to the oven, the CO2 dissolved in the dough becomes supersaturated and comes out of solution, increasing the pressure in the alveoli at the same time that the CO2 is expanding due to rising temperature.  If the surface of the dough is already cooked and gas tight, you get blisters to accomodate the gas that can't escape.

Sooo... bulk fermentation is good but... not so much for the oven spring. You're getting that right from the beginning.

BUT... perhaps for gluten development? Why, exactly, am I bulk fermenting??

I have visited this post several times since it was published in mid October. I am trying to wrap my head around this. Your highest loaf was at ~2 hours and, yet there was no increase in the rise of the fermenting dough. If I understand this correctly, you’ve got me doing a triple take :-)

My breads are mostly raised with SD, but this seems to be a valid test that would relate to it.

” If this is true, the yeast is actively producing carbon dioxide early on, but the gas is not immediately visible because it remains in solution. Eventually, however, the solution becomes saturated and any further carbon dioxide has to be released as gas, causing the dough to start rising.”
-   I have always thought that the “lag time” for the starter (or in your case the commercially leavened dough) was due to the initial inactivity of the yeast. This thought may be incorrect.

”The plateau in baked height after 2 hours most likely indicates a limit to the capacity of this dough for oven spring, since the rise in the unbaked dough after 2 hours indicates that fermentation continues.”
-   Very interesting thought. There are so many things to consider that are easily over looked. Since your dough rose after 2 hours, it is reasonable to think that IF the the gluten was stronger that breads after 2 hours would have continued to increase height.

I am interested in your opinions. Please keep experimenting and posting them.

Nice experiments. Well done.  But I have to question to physics/chemistry.  In bread dough, the ethanol content is quite small, well below 10%, so as the table below indicates the boiling point of the mixure (the water and ethanol boil as a mixture, not separately) is very close to 100°C and thus the vapor pressure never exceeds atmospheric pressure in the dough so it contributes nothing to oven spring.

Another interesting experiment is to expose each dough piece to a room temperature vacuum of around 15" of Hg, not a very high vacuum but enough to demonstrate how much gas is trapped in the dough. At sea level local pressure is around 29.9" of Hg/14.7 psi.  Drop the local pressure to 15" of Hg or 7.3 psi the gas should approximately double in volume reduced somewhat by the strength of the dough that restrains it.  Make a short video of the dough for your multiple dough pieces and see if you are getting matching oven spring.  Slow application of vacuum is suggested so that the cell walls have time to creep.

The first time I did this I immediately wanted to build a vacuum oven to commercialize the phenomenology. 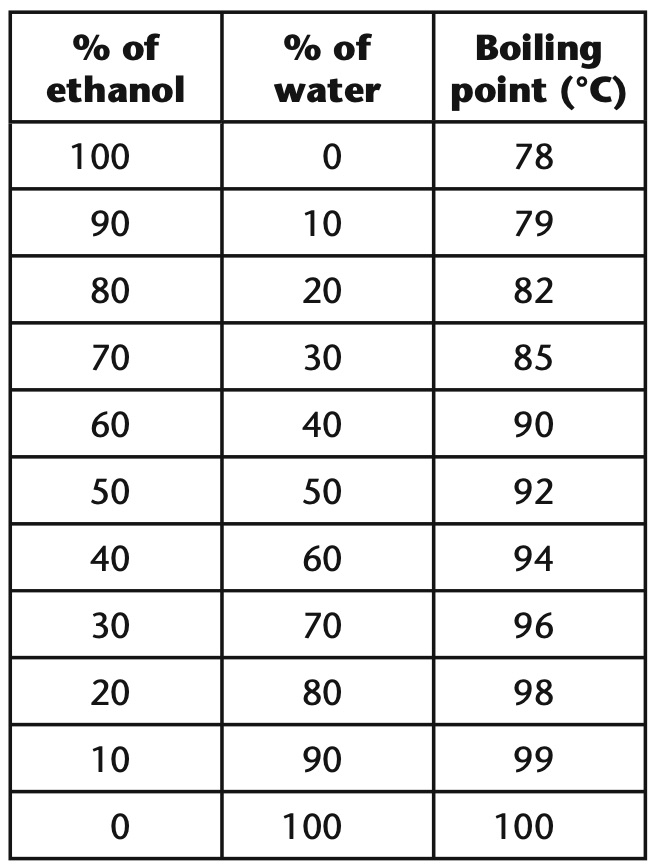 What was the dough temperature during the fermentation?

At 0.3% IDY, bulk fermentation at 25°C for 3 hrs may or may not be at maximum potential for oven spring.  I would expect that you might reach 25% volume increase at around 2 hr (@25°C) after which it would normally be appropriate to shape and proof, but for reasonable experimental reasons you choose not to shape before proofing and it might take an additional 45 min to 1:15 to reach oven ready level of proof if shaped, so perhaps somewhat less time if there is no shaping and the associated gas loss due to handling. A few more samples that demonstrate the value/hazard of over-proofing would be instructive.  If you are running this experiment at a lower temperature (than 25°C), then additional time and more samples are definitely appropriate.

There is a question about when volume expansion begins to impact only the height of the dough ball.  Initially, if you don't press the dough firmly into the corners of the beaker, volume increase fills that gap but is not reflected as an increase in height, so without some explanation or correction factor, the reported height perhaps does not reflect volume increase accurately.

I would also expect that waiting until the dough volume has doubled before baking would result in a total volume increase substantially greater than 200% (which I take as evidence that the dough was not fully proofed before being baked even at the extreme).  Is it possible that the gluten was not fully developed?  There was no report or documentation of extensibility or window pane quality at end of mixing.