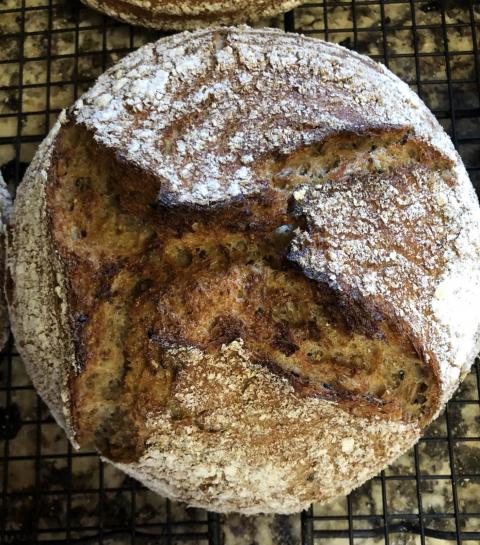 This is another one of Cedar Mountain’s recipes. I definitely need more practice handling dough that has this much rye in it. The dough was super extensible but not very elastic. I managed to keep the stickiness down to a minimum by keeping my hands wet during the coil folds, and being liberal and quick during shaping. It felt quite heavy even after bulk even though the bulk was fast compared to my usual bulk times. I gave it at least an hour proof at room temperature before retardation in the hopes of lightening the crumb a bit.

1. Feed 8 g of your starter 16 g of water and 16 g of unbleached flour. Let that rise at cool room temperature for the day.

2. Place into fridge until the next morning.

1. Take the levain and both ground and sprouted rye out of the fridge and place in a warm spot.

2. Mix the water with the flour on the lowest speed in the bowl of a stand mixer until all the flour has been hydrated. Autolyse for at least a couple of hours.

3. After the autolyse, add the salt, the yogurt, and the levain to the bowl. Mix on lowest speed for a minute to integrate everything, then mix on speed 2 for 7 minutes.

6. Add the add-ins to the bowl and continue mixing another 2 minutes or longer until well distributed.

7. Remove dough from bowl and place in a covered tub in a warm spot (oven with light on). Let rest 30 minutes.

8. Do 2 sets of coil folds at 30 minute intervals, then switch to hourly folds for another 2 sets.

10. Tip the dough out on a bare counter, sprinkle the top with flour and divide into portions of ~825 ???g. Round out the portions into rounds with a dough scraper and let rest 30 minutes on the counter.

11. Do a final shape by flouring the rounds and flipping the rounds over on a lightly floured counter. Gently stretch the dough out into a circle. Pull and fold the third of the dough closest to you over the middle. Pull the right side and fold over the middle and do the same to the left. Fold the top end to the center patting out any cavities. Finally stretch the two top corners and fold over each other in the middle. Roll the bottom of the dough away from you until the seam is underneath the dough. Cup your hands around the dough and pull towards you, doing this on all sides of the dough to round it off. Finally spin the dough to make as tight boule.

12. Sprinkle rye bran in the bannetons. Place the dough seam side down in the bannetons, sprinkle more bran on the dough and cover. Let rest for an hour on the counter and then put to bed in a cold (38F) fridge until the next morning.

These came out flatter than my usual oven spring but I’m happy they aren’t completely flat considering the amount of rye and add-ins in these loaves. Unfortunately these are all claimed for so I won’t know what the crumb is like.

They look great, I still haven’t baked anything with this much rye, one of these days I need to give it a go.  These really look good Danni, can’t wait to see the crumb.

Thank you for posting Danni. I'm trying to learn to bake with rye so I definitely plan on trying this recipe out.

rye ones, are my absolute favorites.  I know I would like this one for sure.  I have a some nice smoked brisket, home made Dijon mustard and sauted cabbage to stuff between a couple of slices of this one!