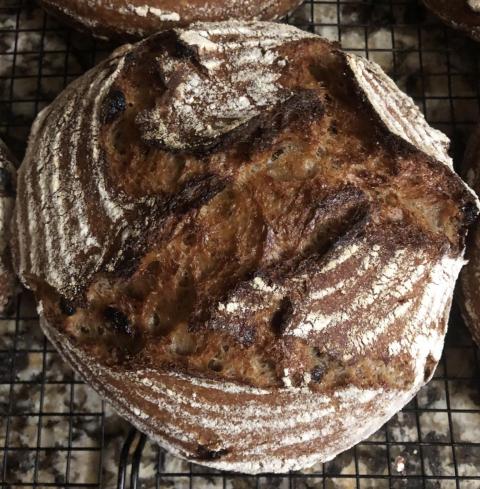 This is an adapted recipe from The Perfect Loaf where I put in  my usual amount of 250 g of levain rather than the 180 g that the recipe scales up to when I increase everything to make 3 loaves. I did this to speed up fermentation since this was a very sluggish dough based on the last time I made this. Adding the extra levain cut the bulk by an hour (total bulk was 4 hours and 15 minutes rather than 5 and a quarter hours).

I also reduced the hydration a bit and soaked the raisins in Bourbon.

This is the link to Maurizio’s original recipe: https://www.theperfectloaf.com/cinnamon-raisin-sourdough/

1. Soak the raisins in the bourbon and cover. Let sit overnight.

2. Be sure that your starter has been refreshed/built up a couple of times already, and give it one more feeding to equal 250 g. I used wholegrain flour for tbe first two feeds and about 1/3 wholegrain and 2/3 unbleached flour for the last feed.  Once it has doubled, refrigerate until the next day.

3. Mill the required amounts of Red Fife berries on the finest setting possible. Add the unbleached flour to it and cover.

1. Mix the dough flours and 730 g of the water together in a stand mixer on the lowest speed for a minute or two, and then let autolyse for a couple of hours.

2. After the autolyse, add the salt and the levain and mix for a minute on the lowest speed. Then mix on the next speed for 9 minutes.

3. Add the remaining water, soaked raisins, and the cinnamon. Mix until the raisins are fairly well distributed. Cover the dough and let rise in a warm place.

5. Let rise until the volume has expanded by 50%. So the total bulk was 4 hours and 15 minutes. It was ine hour shorter than last time.

6. Tip the dough out on a bare counter, sprinkle the top with flour and divide into portions of ~775 g. Round out the portions into rounds with a dough scraper and let rest covered with a tea towel for an hour on the counter. This is a heavy dough so I tried to give it as much fermenting time as I could.

7. Do a final shape by flouring the rounds and flipping the rounds over on a lightly floured counter. Gently stretch the dough out into a circle. Pull and fold the third of the dough closest to you over the middle. Pull the right side and fold over the middle and do the same to the left. Fold the top end to the center patting out any cavities. Finally stretch the two top corners and fold over each other in the middle. Roll the bottom of the dough away from you until the seam is underneath the dough. Cup your hands around the dough and pull towards you, doing this on all sides of the dough to round it off. Finally spin the dough to make as tight boule as you can.

2. Cover the pots and bake the loaves at 450 F for 25 minutes, remove the lids, and bake for another 22 minutes at 425 F. Watch that they don’t burn. Internal temperature should be 205F or more.

When I took the lids off, I felt like the first batch was underproofed somewhat due to the explosive oven spring so I took the second batch to warm up while the first was finishing up in the oven. I’ll post what they look like once they are done baking.

about your bakes Danni, is that you're very consistent. Consistently excellent. Some lovely looking boozy breads. I think these need to be eaten in the afternoon and not too close to driving either. What's there not to like? Sourdough with bourbon and cinnamon. Lovely!

Beautiful loaves as always Danni.  With our early autumn weather upon us I’m thinking I may have to make cinnamon raisin sourdough, something I’ve never had and your bake is my inspiration.  I’ll only do one loaf though, but this might just be my next week’s bake, thanks for posting this.

and I look at the 'happy 6 boules' and know that is a Danni bake!!!!  Cinnamon and raison...what's not to love! Kat

Could be more open but it tastes fantastic! 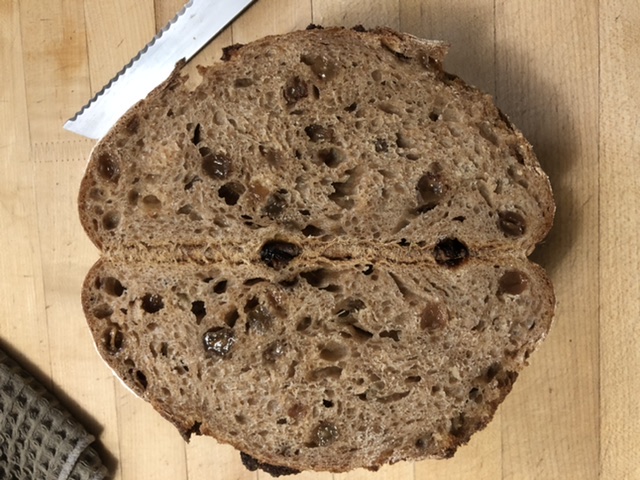 That look great to me Danni.  I can never get very open crumb when there are a lot of heavy inclusions.

I think this is a lovely crumb. A recipe which I look forward to trying.