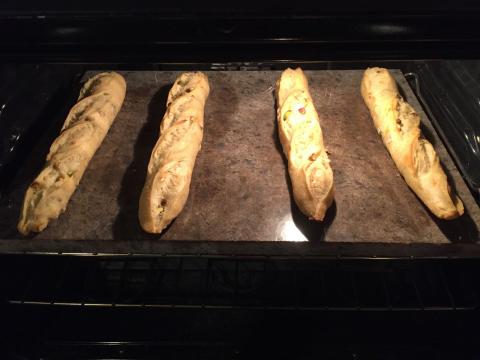 Abel Sierra (abelbreadgallery) posted a new creation of his the other day.  Liking what he posts, as well as semolina breads, I knew I'd be jumping right on it.

Instead of his recommended Caputo #1 for the levain I used some remaining tritordeum flour, which seems to have WW character.  With no step by step to go by, I relied on my standard sesame w semolina methodology.

The crumb is curiously dense.  The population of pistachios is significant, for a baguette shape the nut seems a little too large.  For whatever reason not overly impressed with this one, although the shaping and scoring seem fine. When fruit or nuts are incorporated into a slender form, as these are, the sleek barrel shape is more difficult to achieve.

They could have been baked a half shade darker, but being semolina based, they exhibit a golden color naturally.  I'll leave it to Benny to show us how bake this with an open crumb. 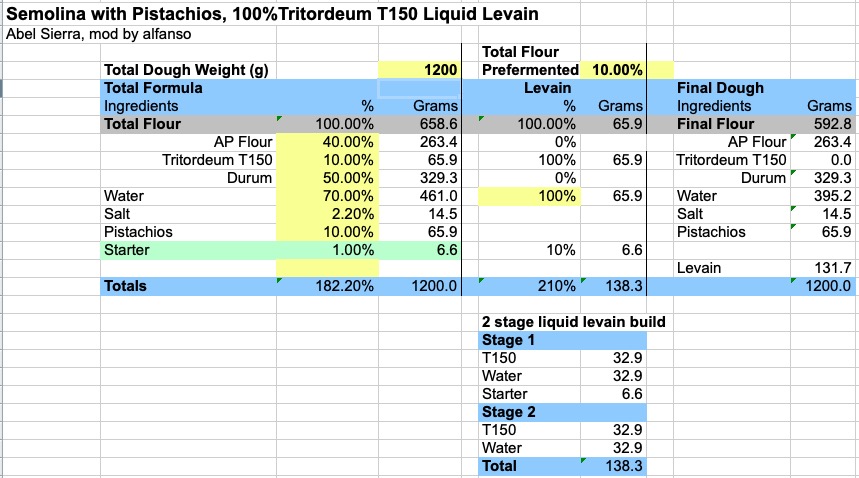 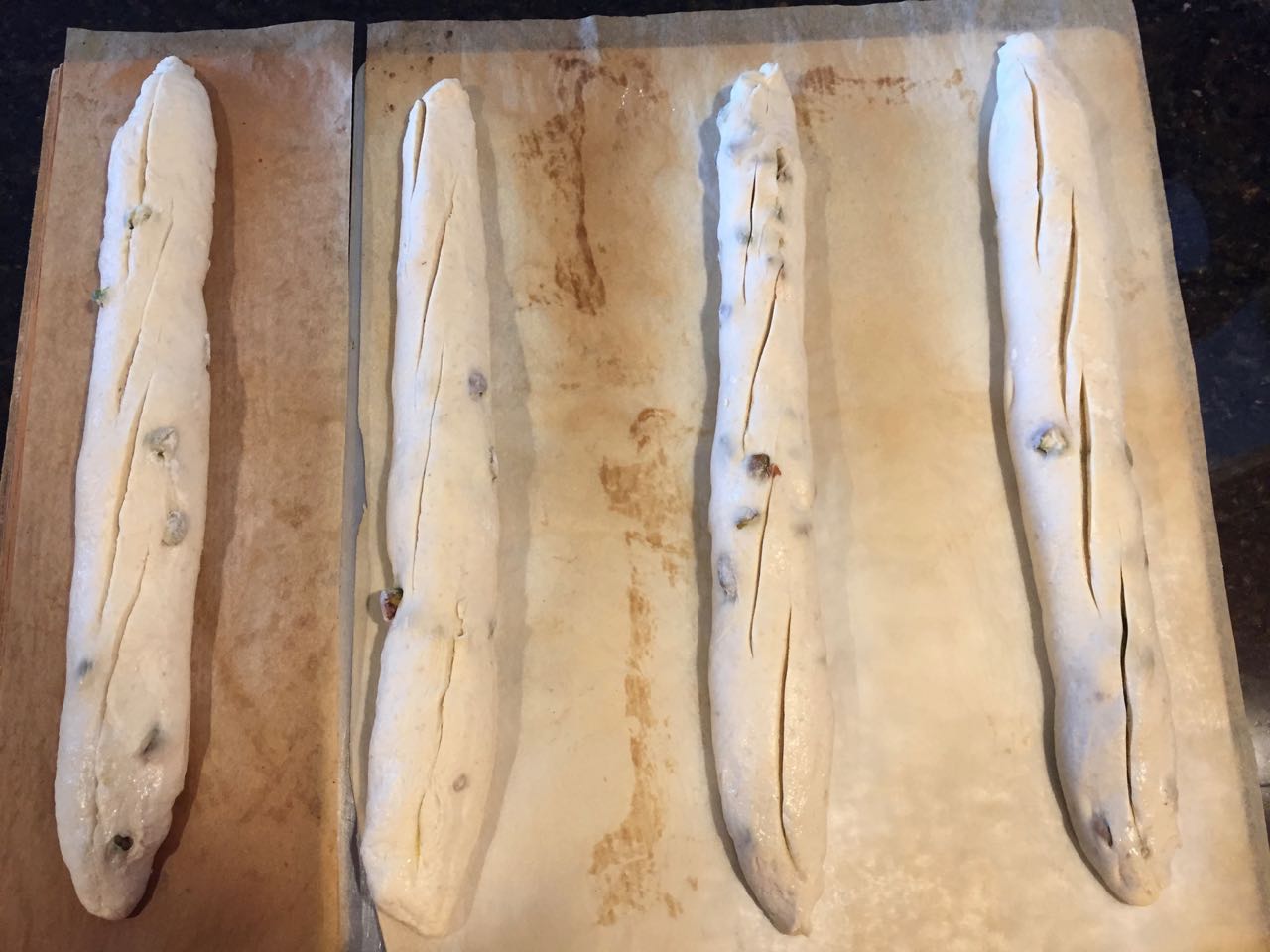 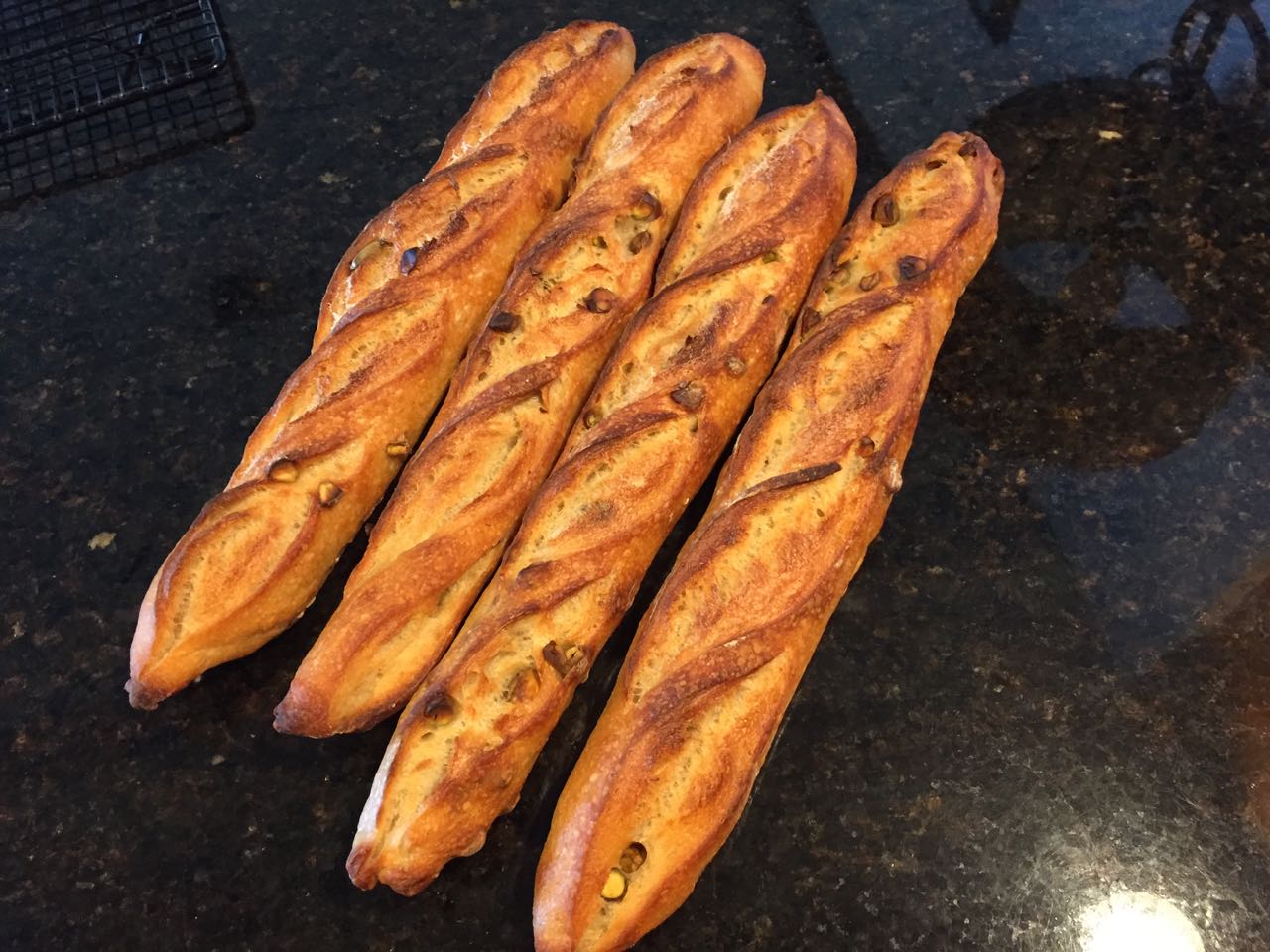 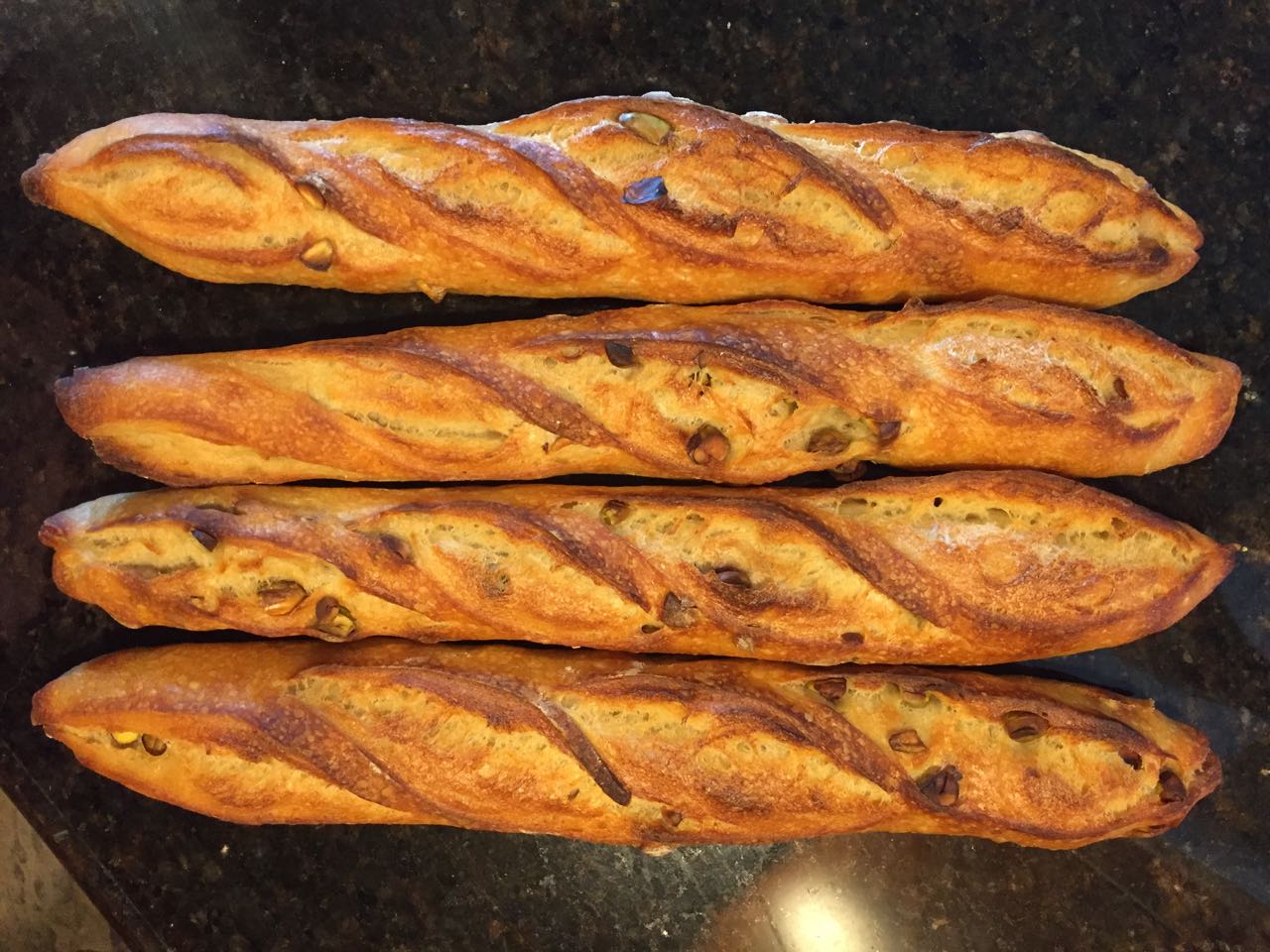 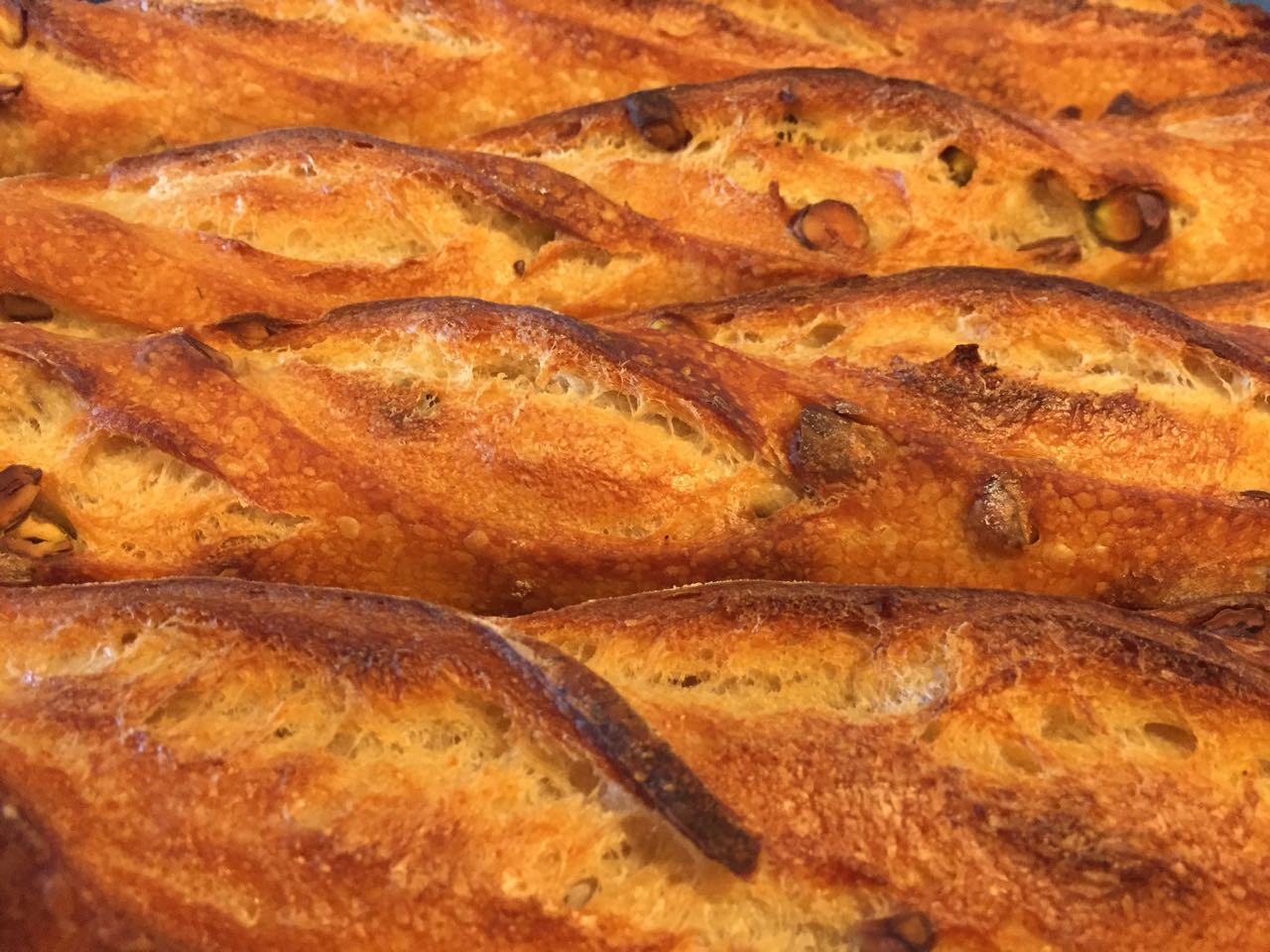 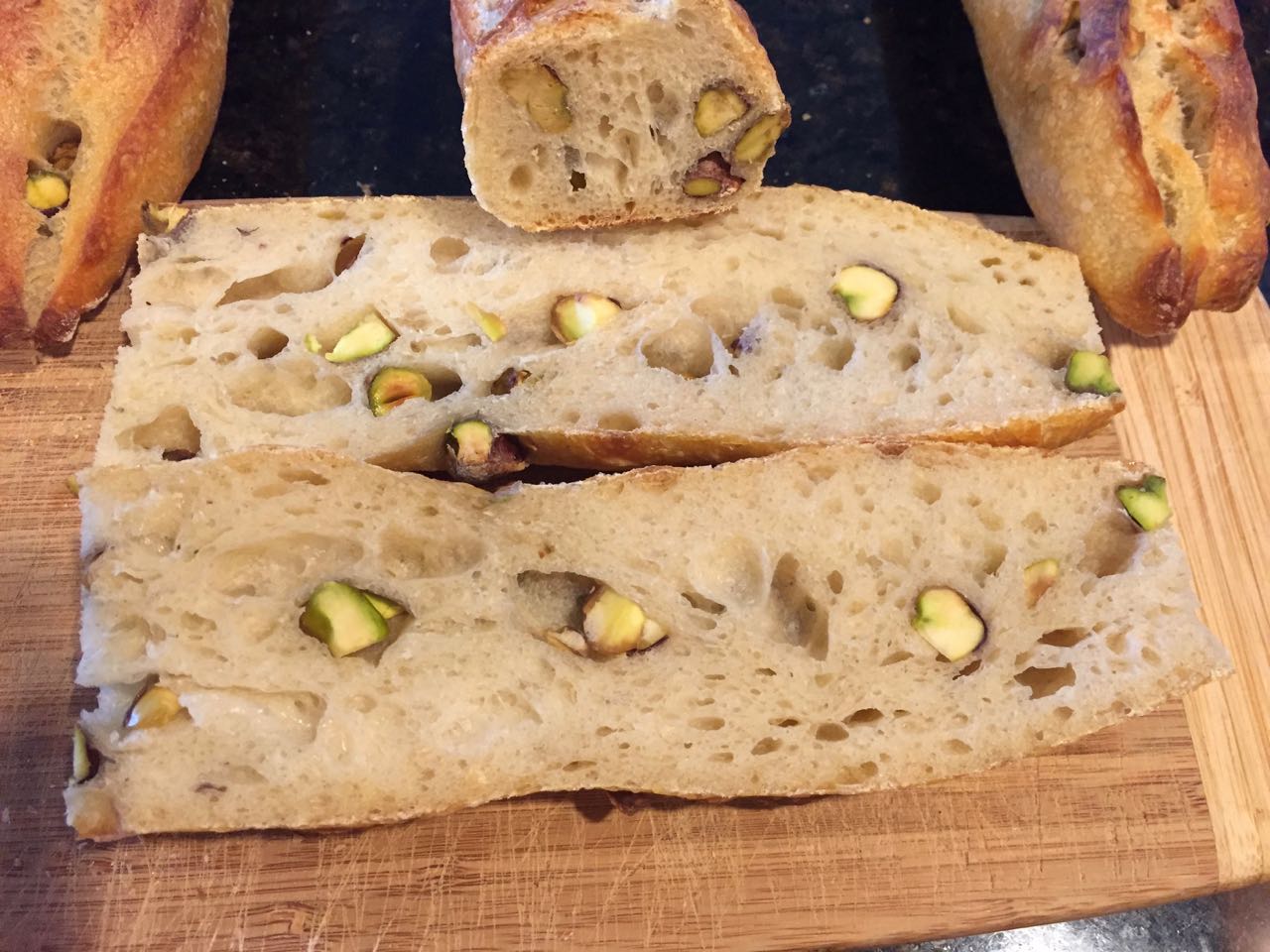 These had a too dense crumb, and I don't usually have that.  I'm running a similar batch of regular sesame semolina tomorrow to compare.  Same 60% semola but less hydration at 67%.

As I mix by hand, the nuts (or fruit or seeds...) get incorporated at the first Letter Fold, so I have the opportunity to stretch out the dough on a wet counter and then distribute fairly evenly.

They look delicious Alan.  At 10% I didn’t think that there would be as many pistachios in there as there are.  Do you think that the weight of the pistachios affected the crumb?  You usually get a much more open crumb than this.  In any event I’m sure they are delicious.

additions will weight he dough down, but this seemed to be on the too much side of the ledger..  For what they are, they did come out nicely, so no complaints there.

We have a lebanese bakery round the corner that makes incredible pasteies like kenafeh and some bread.  every other item has pistacios on or in them.  This is the kind of thing I would exoect from them.  btw  - how did these loaves straighten up so well - they are crimped prior to baking - do you the new 'auto correct your loaves' feature on your oven ?

in terms of being straight. And as mentioned, additions like big nut pieces will contribute to a more difficult shaping.  Personally I didn't find the the pistachios did any thing for me, and I'll assume that the Lebanese bakery goods are on the sweet side.

I used to use White-Out on the breads while they were baking but since the dawn of the personal computer age I think that auto-correct is the way to go!

THB, Maybe it was the lack of the sesame seeds on the surface, but these seemed to be missing something, flavor-wise.

and its good, just not aaaaamazing.  Maybe your expectations on the flavor were boosted by the idea.  you are correct about the 'sweet side' btw.  You know sometimes when I roll out my loaves I accidentally stretch them and kink a spot ... maybe ctrl+z will undo that, sheesh, on really uniform ones I should copy and paste 10 times !

Yes there should be an undo button when we are shaping.😆

For whatever reason, The semolina pistachio came out okay but the crumb was dense and the flavor was missing something.  My wife suggested I run my standard sesame semolina formula to compare.  With some minimal exceptions, we're looking at the a similarity in character here.  Same 60/40 flour mix, but with a slightly more PFF and slightly less hydration.

These are only about 35g more in weight each 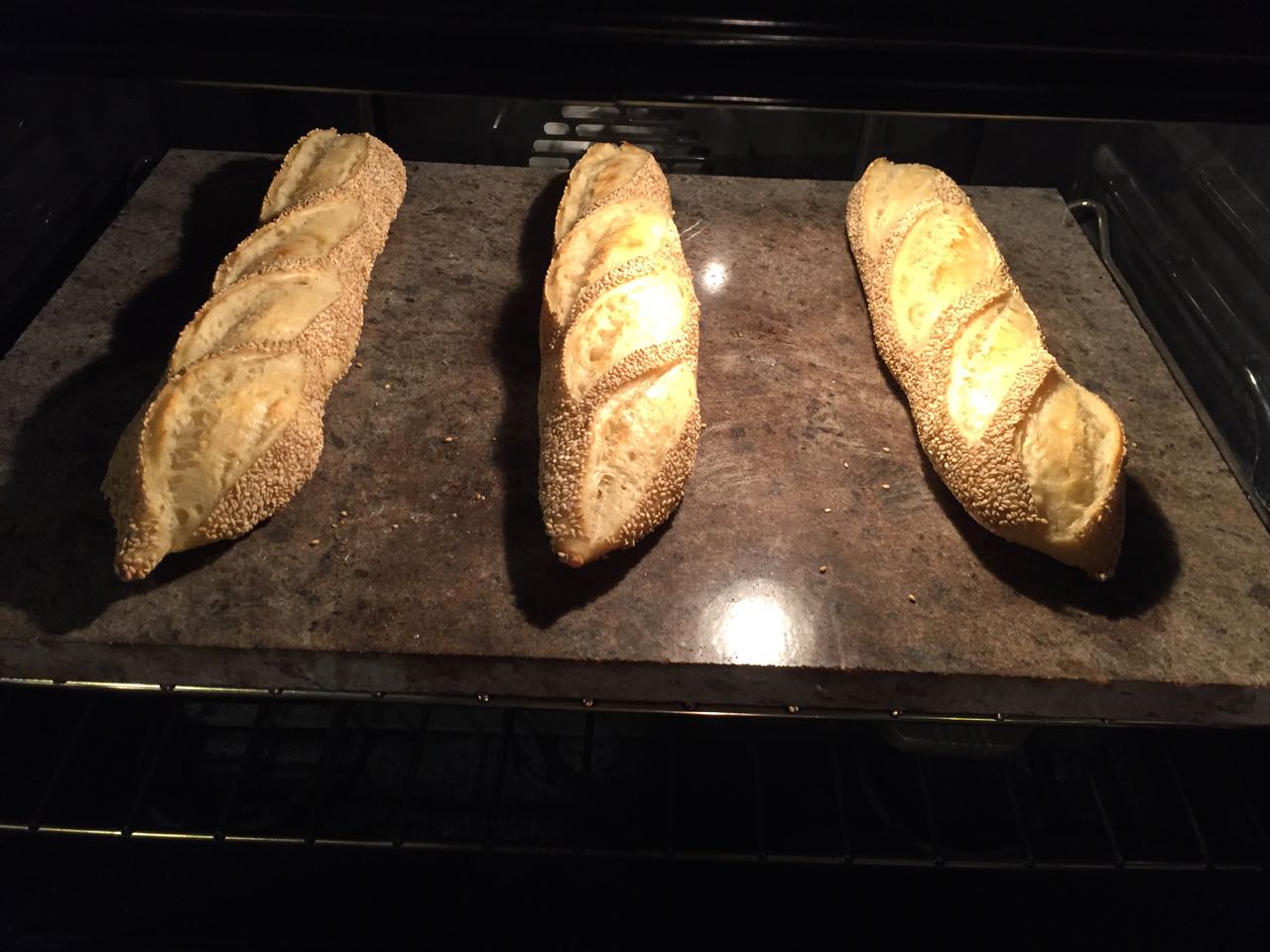 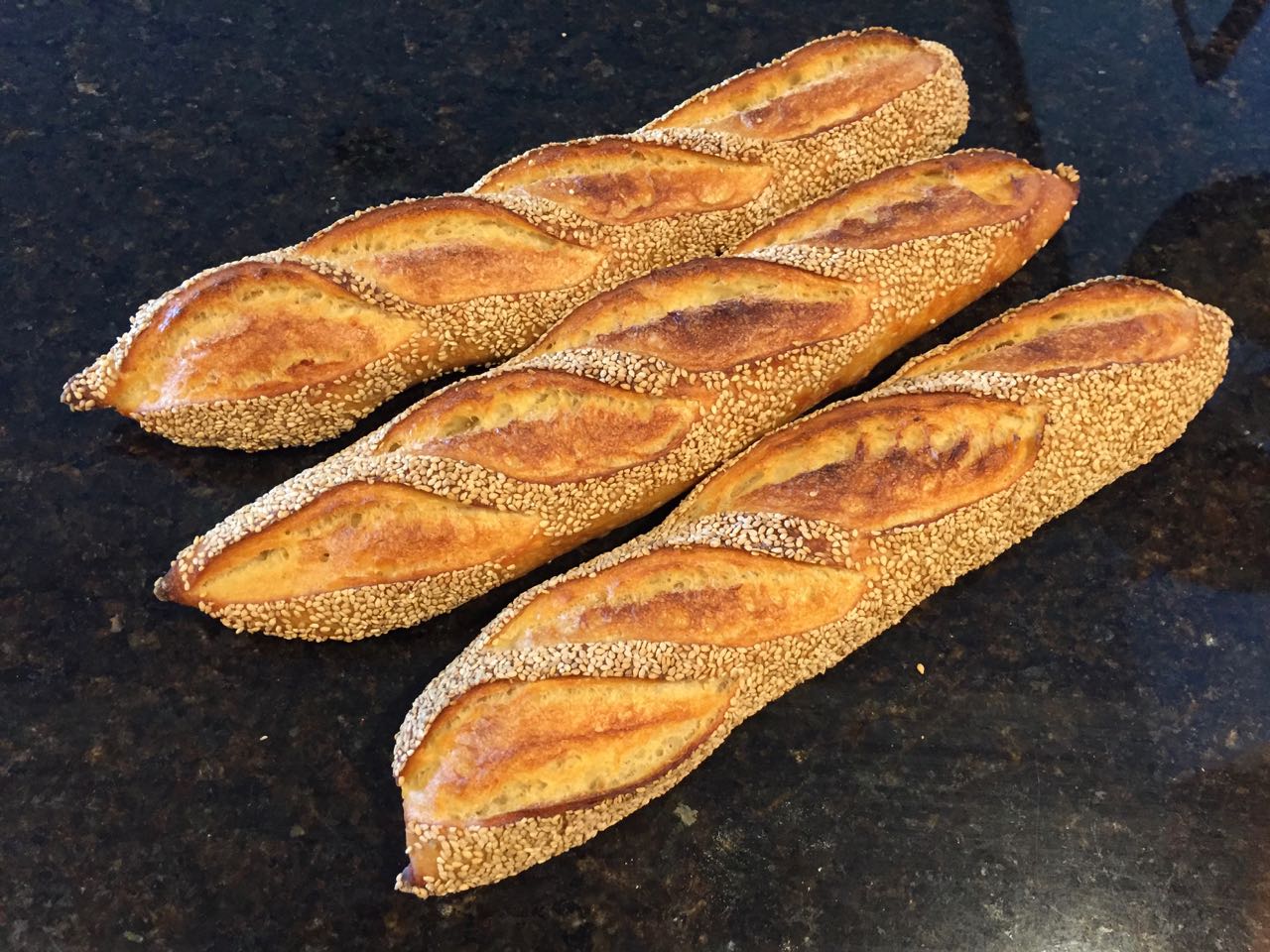 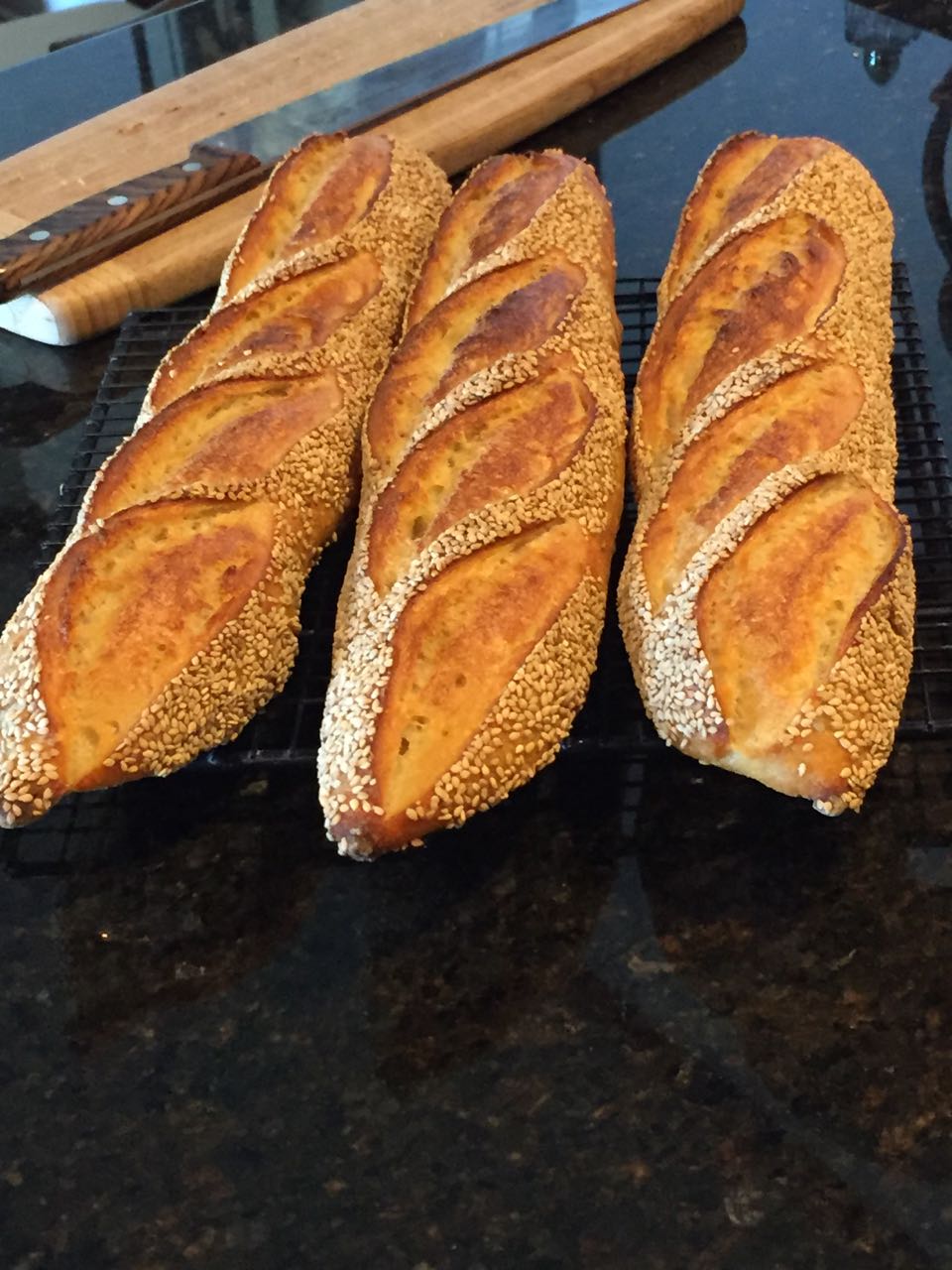 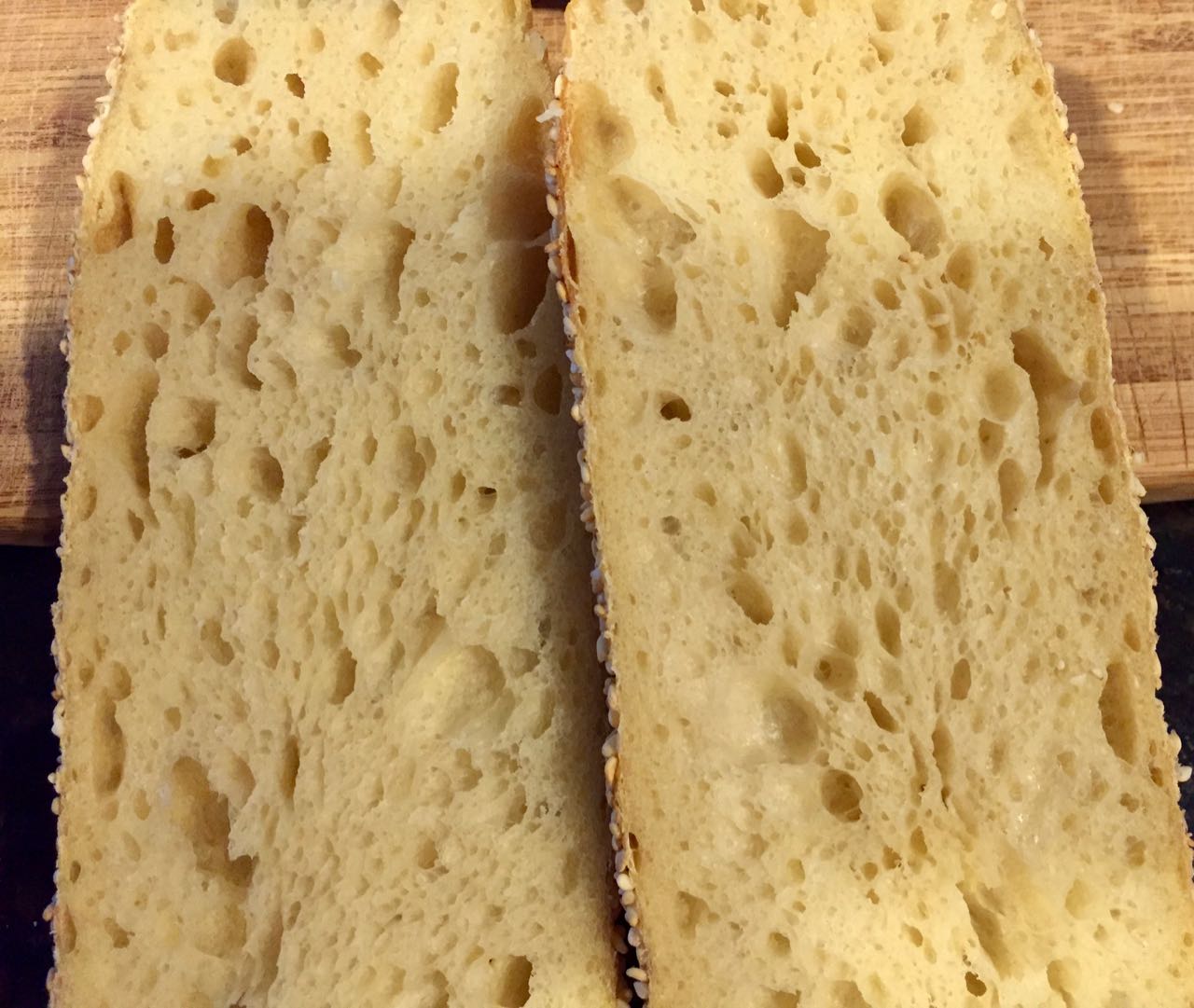 OK I will try this baguette this week.  I’ve done the other formula so many times now and have only done a sourdough only formula once.  This will be a good one to try.  At least I’ve worked with Kamut and this probably behaves similarly.  What I’ve found with Kamut, at least what I have which is from BC here in Canada, is that is isn’t very thirsty and it seems to be super extensible, it should have shaping go easily I hope.

Alan knows how to get me to try something he knows I love sesame seeds so that often works.

I like the golden tint to the outside. The crumb looks nice and soft I am expecting a shipment of that flour since I detected a buzz about Durum/Semolina. I haven't baked much with it maybe once or twice a few years ago and it was BRM Semolina which I have learned since is more for pasta. I think I will try a batard before attempting baguettes. Did the pistachios stay crunchy or do they soften up? My reading of Abel's brief formula has the hydration at 75% total. The crumb on his bread is really spectacular and probably difficult to replicate. He is a true master. Is the Semola a thirsty flour in general? This flour goes by a lot of names and has a few different characteristics that I am need to learn about. Should be fun. Thanks for putting it together and breaking the trail.

Yeah, pretty clear that the formula is 75% hydration, not 70%.  Ouch!  That makes the delta between the Hamelman sesame semolina and Abel's even greater, an 8% jump in hydration rather than 3%.

Hand mixing with the flour does indicate a drier dough, although with short rests between the post-bassinage/pre-French Folds, and again mid-way through FFs, the dough does start to smooth out and by the first Letter Fold, it is an easy dough to work with.  And I've always found the semola r. to be quite a compliant partner at shaping time.

I'll change the formula to the overall hydration. of 75%, and will run it again with a more robust weight.  I also think that the slenderness of the first batch at the top might have led to the tightness in the crumb.  But I won't assign that to  the T150 as it constitutes a mere 10% of the total flour.

The pistachios, already roasted and salted did assume a fairly spongy texture and lost the typical crunch to the bite that one expects from them, and I'm leaning on leaving those out or subbing in something else.

One more thing: " The crumb on his bread is really spectacular and probably difficult to replicate".  That's just the motivation I need!  I think on the next run, I'll include one batard.

I've never tried pistachios in bread before.  How did they taste?  Sounds like you were not enamoured with the flavor of this one.  I wonder if the tritordeum flour effected the crumb?

A little spongy and I'm unconvinced after a single run that they add much.  Considering the slender diameter of the batons, they take up a considerable amount of the crumb space across that diameter.  Also mentioned why the 10% tritordeum should not have had much of an effect on the crumb, as it is at a minimal amount.  But I have some leftover T150 starter from the first levain build, and I'll use that as a base for the next 3 stage build.

Drat!  Now I have to get off my lazy keister and do some work again!  Lordy, will this never end?

At least you can eat your work....that's a god thing😜😋

Here is my take on Alan’s Sesame Semolina Baguettes.  I used his formula generally but made a few changes.  I added 0.07% IDY and also did an overnight Saltolyse and levain build.  I forgot how low hydration this was going to be so in the future I wouldn’t do the overnight saltolyse and would  instead just mix the levain IDY water and flours in the morning then add salt 20 mins later.  I ended bulk at 25% rise in the aliquot jar and placed the dough en bulk in the fridge until the next afternoon.  26 hours or so after the start of cold retard the dough was divided and pre-shaped and left to rest in loose rolls for 20 mins.  Shaping was a bit of a mismash of different shaping techniques but I think I like shaping ala Abel the most and will try to stick to that in the future.  These were very easy to roll out to 16” and in fact with the first one I had to cut one end because it rolled out to 18” way too long for my steel.  It was a challenge to roll these on the wet towel and roll them in the sesame seeds, each time I felt like I was degassing them a bit and then stretching them as well.  I wonder if the next time I was to make these again, if I should proof to 20% and then after shaping let them have a bench rest at warm room temperature to try to bounce back a bit from the shaping, wetting and sesame seed applications.

Having never baked anything with semolina to such a high percentage before I didn’t know what to expect, but the dough was nice and extensible. The flavour of this baguette though, for a sesame seed fanatic is just outstanding.  I’m not sure what the Semola Rimacinata is contributing for flavour but this is my favourite tasting baguette I’ve ever made.   I dare say that it tastes better than the sesame baguette I used to buy at my favourite local bakery Blackbird.

The crumb has a lovely yellow hue from the Semola and is nice and tender without too much chew.  The crust is very crispy with that amazing sesame flavour.

I have a line of dense crumb near the center of the baguette that when I examine it closely, I can faintly see white flour.  I suspect that the dense crumb section is because of raw flour that got into the middle of this baguette when pre-shaping or shaping.  I’ll need to be a better job of brushing off the excess flour.  If it wasn’t for the yellow hue of the semolina I would never have seen this line in the dense area.  I wonder if this causes some of the density in baguette crumb we see?

Anyhow, these baguette taste so good I just downed out plain no butter or anything for dinner. 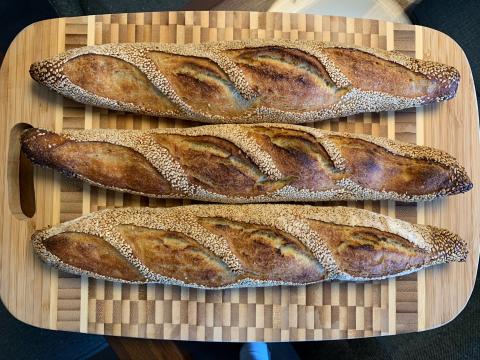 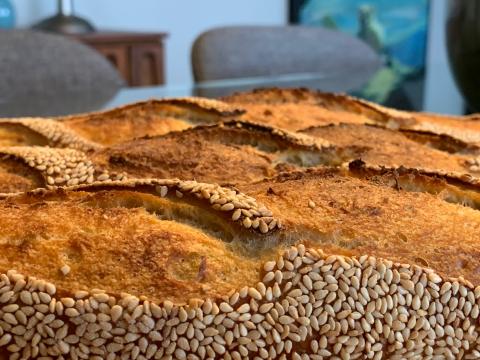 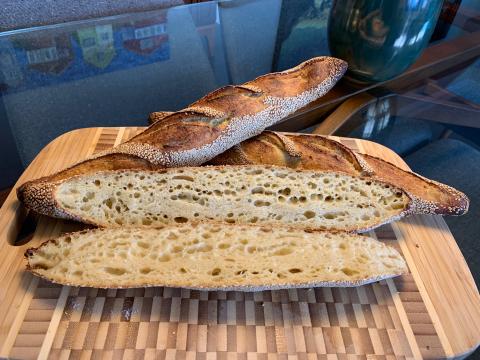