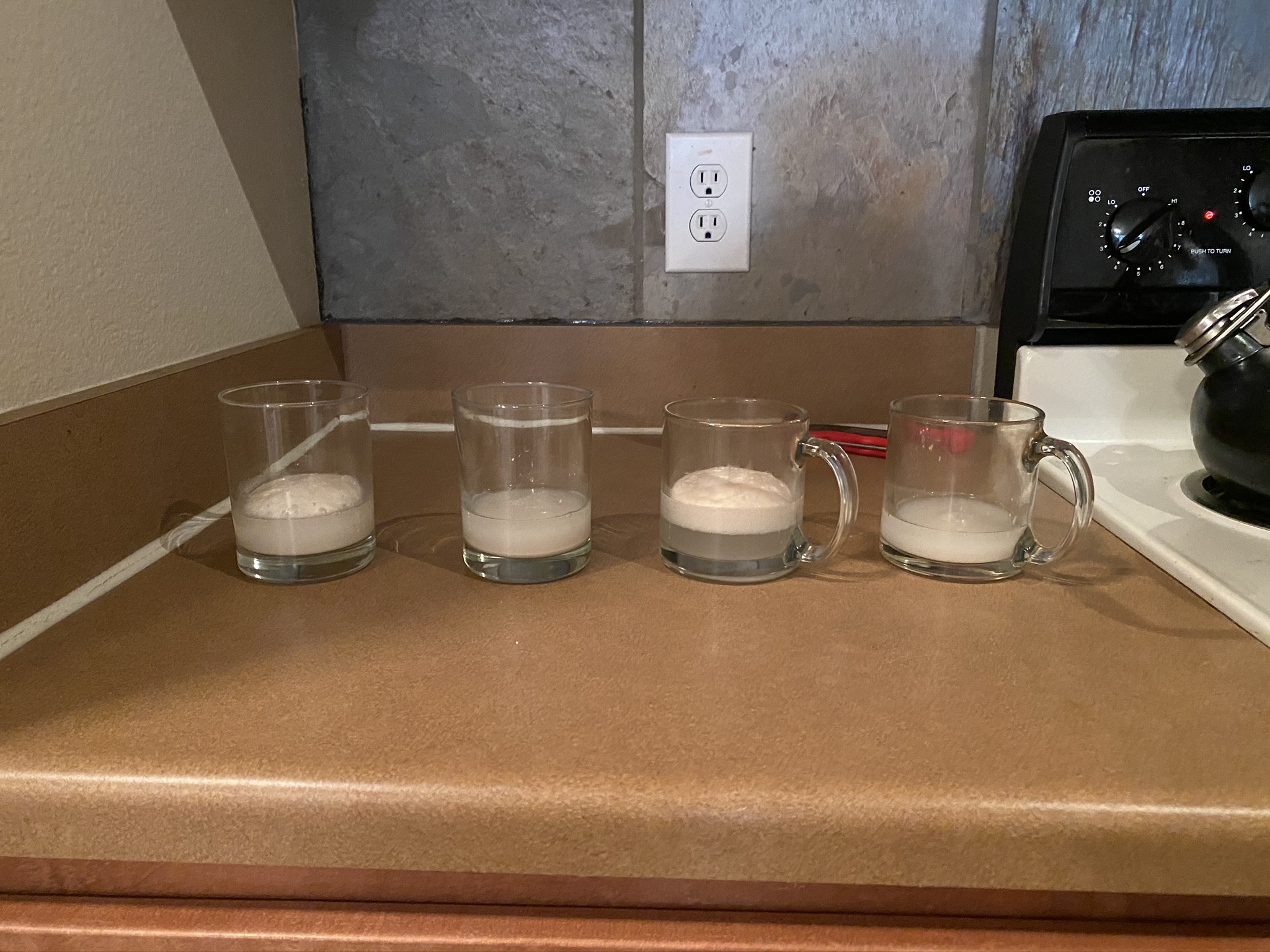 I tried proofing a teaspoon of active dry yeast (all from the same container) in a little water and found it proofs way less in tap water than it does in bottled water. Is there something wrong with my tap water or is this a common thing?

I heated the water to 105F in all cases.

Jacob, How long did each of the test ferment before the image was taken?

I think it will help is you check this link out and perform 2 test. One with tap water, the other with bottled water. If you do run the test, please post your results. NOTE - spring bottle water is best, distilled water has no minerals.

I just had a thought as a result of reading your post. It is commonly believed that chloramine in water harms the sourdough yeast activity. It seems a simple side by side test using a starter and tap vs. spring water may settle the matter as if your tap water was not as efficient compared to spring water.

obviously the yeast likes sugar.   Or the sugar addition lowered the temperature and the yeast died in the hotter water.   Tap or bottled doesn't seem to make a big difference.

What happens with just flour, yeast and tap water?  That is the big question.

yeah I was testing if you can proof yeast without sugar along with testing the types of water. turns out nothing happens if the yeast doesn't have food.

Another Girl
Sep 18 2020 - 11:22am
Your water might be treated with chlorine or chloramines

I don't think it means something is necessarily "wrong" with your tap water, but it is possible that your tap water is treated with certain chemicals in quantities that, while deemed safe for human consumption, might be detrimental to yeast, sourdoughs, etc. The obvious example when it comes to yeast and sourdough is chlorine, which is known to have a detrimental affect on yeast. Chlorine dissipates naturally when exposed to air, so some bakers let a glass of water sit out for some time before using it to mix yeast or sourdoughs. The wrinkle is that many municipalities now use chloramines (chlorine bonded to ammonia) in place of or in addition to chlorine because it doesn't dissipate quickly. It might be worth checking the website or putting in a call to your town's water department to find out about this.

Some years ago, I became aware that my tap water was treated with chloramines, so I began using a water filter that claims to eliminate chloramines as well as chlorine. While I'm not convinced it actually does filter out chloramines, my sourdough seems to be more active, better tasting, and better smelling since I started using it, so maybe it does.

It might be worthwhile to repeat your test and let the water stand for a while before mixing it with the yeast. If that has a discernible effect, chlorine might be the culprit. If not, longer lasting chloramines or other chemicals might be involved.

I never use tap water for bread baking, but it’s ok for boiling pasta.
Depending on where you live, your municipal water supply can be treated with chorine or other chemicals to prevent bacterial and mold growths in the pipes. Well water also can be rich in different minerals that may affect your bread too.
Lucky me, my husband put in an RO system for his aquariums, so I use pure RO water in my baking. Distilled water from your grocery store would be similar. But you could get a simple inexpensive charcoal filter for your tap supply.

I live in an area with very hard and chemically treated tap water. Bread baking here is a matter of using bottled water, because of several things:

Use RO and bottled water for good results. Not sure if different RO has different outcomes.