How can I measure the humidity in my ovens?

How can I measure the humidity in my ovens?

I’m hoping that you all can suggest a practical method for measuring the humidity level in my ovens.

I have two electric ovens, a Wolf and a Bosch.  Neither of them appears to retain steam.  I have tried the steaming towel method, the cast iron pan / lava rocks method and spritzing.  I called Wolf and Bosch and was told by both companies that their ovens are designed to vent “excess steam” even when convection is tuned off.

I don’t seem steam in the ovens nor do I feel a whoosh of steam when I open the oven door.  I know that I need to do a lot baking experiments.  But I would also find it helpful to really know the facts about the humidity level in my ovens.  If my steam generation methods are not effective, at least then I would know to concentrate my efforts in using sealed baking vessels.

Suggestions will be most appreciated.  Thank you!

Hi Carol, I bet all home oven leak. Mine actually vents at the top n the front side of the control panel. But where it really leaks steam is in the oven door at the bottom. If you open the door and inspect the gasket, you will probably notice a spot on the bottom and in the middle of the gasket that is fastened on the door that is purposely left void. This is by design. It vents in between the the double glasses that n the door. I think the purpose is to reduce the heat on the outside glass.

Steam in a hot oven is almost impossible to see. The best way to check for escaping steam is to use a mirror around suspected areas. If steam is present it will fog up the mirror.

IMO, it is not necessary to have a completely sealed oven. Just be sure to supply enough steam to last the first part of the bake. Alfanso and many others us e a dual system that will produce lots of steam (Mega Steam). Use a pan filled with Lava Rocks and also setup a Sylvia’s Steaming Towel system. You will get plenty of steam with this 2 methods used simultaneously.

Thanks so much for your informative reply.

I located two gaps in the Wolf oven gasket, got the oven turned on to 450 F and put a 9x11 pan half full of water on the rack at the lowest position.  After half an hour, the oven was well preheated and the water was boiling gently. I did the mirror test you described at the bottom of the door at the gasket gaps. Also underneath the front of the frame of the oven where heat seems to be vented out.  In both cases, no steam on the mirror.

Maybe what is bothering me is that whenever I open the oven, the steam dissipates quickly.  When I open the oven to put the bread in and pour boiling water over lava rocks in a preheated cast iron skillet, all the steam seems to exit out the open door before I can get it closed.  Then my oven seems to take a long time to build up steam again.  I guess I am slow with all the maneuvering because I’m not skilled enough.

Too bad I can’t beam the uncooked loaves through the closed oven door.

I would most appreciate any of your thoughts or tips.

Carol, in case you are not aware of Sylvia’s Steam Towel method, HERE it is.

This method will produce steam over time instead of a short blast of steam. Try it along with your other method and I think you’ll like it.

Just because you don’t see the steam vapors, doesn’t meant it isn’t there.

So that’s where the Sylvia towels got their name from!

Carol, when I ise Sylvia’s Steam Towel method it is still steaming on the counter after it was left in the oven for ten minutes and then removed.

I boil the water in a tea kettle first then drench the towels with water and then some.  I used to use bread pans for this, but find is easier to use a 9x14 metal baking pan. And I put the pan on the oven floor where it is hottest, not the lowest shelf.  10-12 min of steam using this method is plenty on my recipes allowing rise and nice crust formation.

I’ve been using an old terry cloth hand towel rolled and placed in an old loaf pan I’m no longer using.  About halfway through the preheat of the oven I place it into the oven having almost filled it to the top with boiling water.  I used to just use tap water but then of course it was absorbing a lot of the heat and it was taking too long to heat the oven.  I also use a cast iron skillet.  When doing baguettes I’ll have the Sylvia towel and cast iron skillet on the upper rack.  When doing hearth loaves without a dutch oven my set up is in the photo below. 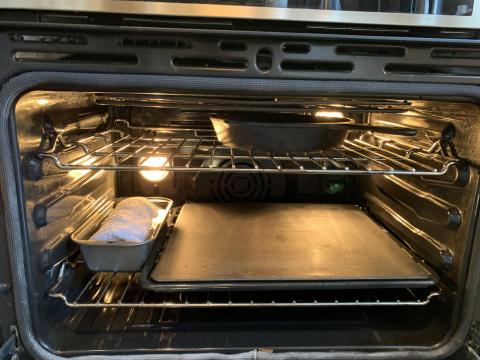 Is your oven gas or electric? Do you think this would work with a gas oven?

I am very appreciative of everyone who has taken the time to comment and offer suggestions.

i can see that I’ve got a lot of baking to do!  I’m sure my husband will enjoy the outcome of any and all bread “experiments “.

Thanks so much for the support,

Steam: one of TFL's favorite recurring topics (along with Love Marriage Specialists etc [poor Floyd -- it never ends]).  And one of my obsessions.  I admit it:  I try to steam, not bake, the dough for the first 20 minutes.  I just noticed your post, timely in the context of the other thread that's been growing this morning about steaming methods.  I second Danny's statement that a constant, generous source of steam from within the oven can make up for an oven's unforgivable desire/design to vent "excess" (leave it to Wolf and Bosch to decide where to draw the line for "excess").  The high prices and reputations of those makes shouldn't force you back into a DO.

I will post some details of my steam curtain setup (in a Bosch, btw) in a while, after I pull this week's miche out and have a moment.

To address the original question:  I've been involved in measuring humidity in the industrial environment, and it is hard to do.  Most reasonably priced humidity sensor/display units realistically have a +/- 10% accuracy, and very few are rated above 125 deg.F.  I found one probe at Omega Engineering rated to 350 deg.F with +/- 2% accuracy, but the probe alone is $650 USD and would requiring drilling your oven to mount.  I haven't found one rated to 550 deg.F; they may exist and Omega could advise you but I would expect any that do to run in the $10,000 USD range.

The UK's National Physical Lab (NPL), equivalent of the US NIST, is working on an entirely new humidity measuring technology involving ultrasonic waves in a tuned resonating tube.  That would likely lend itself more readily to high temperature applications but I haven't seen any news of it being transferred to industry for implementation yet.

So - go with the advice from this thread and throw some moisture in there!

1) Use a shallower and wider pan and place it on the floor of the oven.  Spread the cotton towel all across the bottom and fold as necessary to make fit in the pan.  The floor is hotter than the shelf and all things being equal, should make more steam.

2) Use a tea kettle and boil a full kettle.  Add to the pan poring slowly over the towel, then place on the oven floor for 10 min before adding the dough.

A really sincere thanks to everyone who took the time to post.  All of your suggestions are very much appreciated.

I would like to update you about my experiences.  I devised a very make shift test to determine the presence, but alas not the amount, of steam.  I found an old pair of eyeglasses with an all metal frame.  I put on an oven glove, use long metal tongs to grab the eyeglasses, open the oven door and hold the glasses in the oven.  When steam is present, the glasses fog up almost instantly.

I need to be kinder to my ovens, because both of them passed the eyeglasses test for the presence of steam. And while both ovens vented some heat out the bottom front, I did not detect steam in those areas.  Interestingly, once the oven door had been opened and quickly closed again, it took about 30 seconds for the steam to build up enough I have tso that it was detected by the eyeglasses test.

So I think my steam issues have more to do with issues with the baker.  I suspect that I am older and less agile than most of you.  I am 73 and I have Parkinson’s disease.  I am only mentioning this because I think it is relevant here. When I manipulate baguettes, steaming towels, etc. in and out of the oven, I need to do it slowly and deliberately. I just can’t go Ibm bam boom and close the oven door.  So I think I was just losing too much steam while maneuvering things with the oven door open.  So far, the best methods are a tray of steaming towels and/or a shallow pan of simmering water inserted into the oven well before it’s time to start baking.

Once again, thanks for all the help!

Carol, although this method will not measure the amount of steam in your oven, it may interest you to learn an alternate method to check for the presence of steam. It works well for me, since steam in a hot environment is difficult and oven impossible to see.

Check out THIS LINK.

HERE is the link to the proper section in the video.