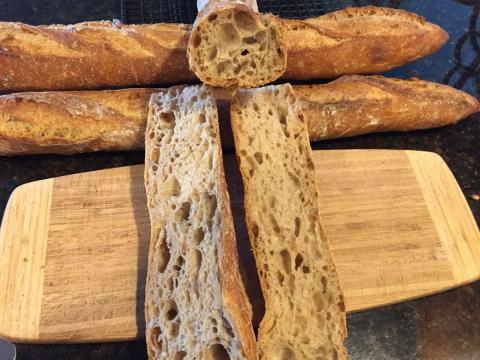 Abel Sierra (Abelbreadgallery) sent a DM to me last week with a link to his new video where he makes this bread.   I asked if I could post this and he said yes.  And of course I wouldn't post it without giving it a whirl myself.  In this case, three whirls to get a version of the formula that I was satisfied with.

On the first run I soaked both sunflower and flax seeds.  Attempting to incorporate during the tail end of 200 French Folds the sliminess of the flax seeds created a problem, and I wasn't happy with the outcome.  For the second run I eliminated the soaker part as well as the flax seeds, and bumped the hydration up a few clicks.  Still not content, I ran this third time, dropping the FFs down from 200 to 125, incorporating the toasted seeds at the first and only Letter Fold.  I also combined a 20 minute proofing on countertop and 2 hours of retard.

Abel's formula is posted at the bottom.

My changes to his formula:

Note, these don't like to exhibit a dark and rich color on the crust.  For a 27% WW flour mix, these had a moderately open crumb.  The flavor is quite nice and rich and the crust is thin and quite crunchy.  Still working on shaping, a bit more difficult due to the seeds. 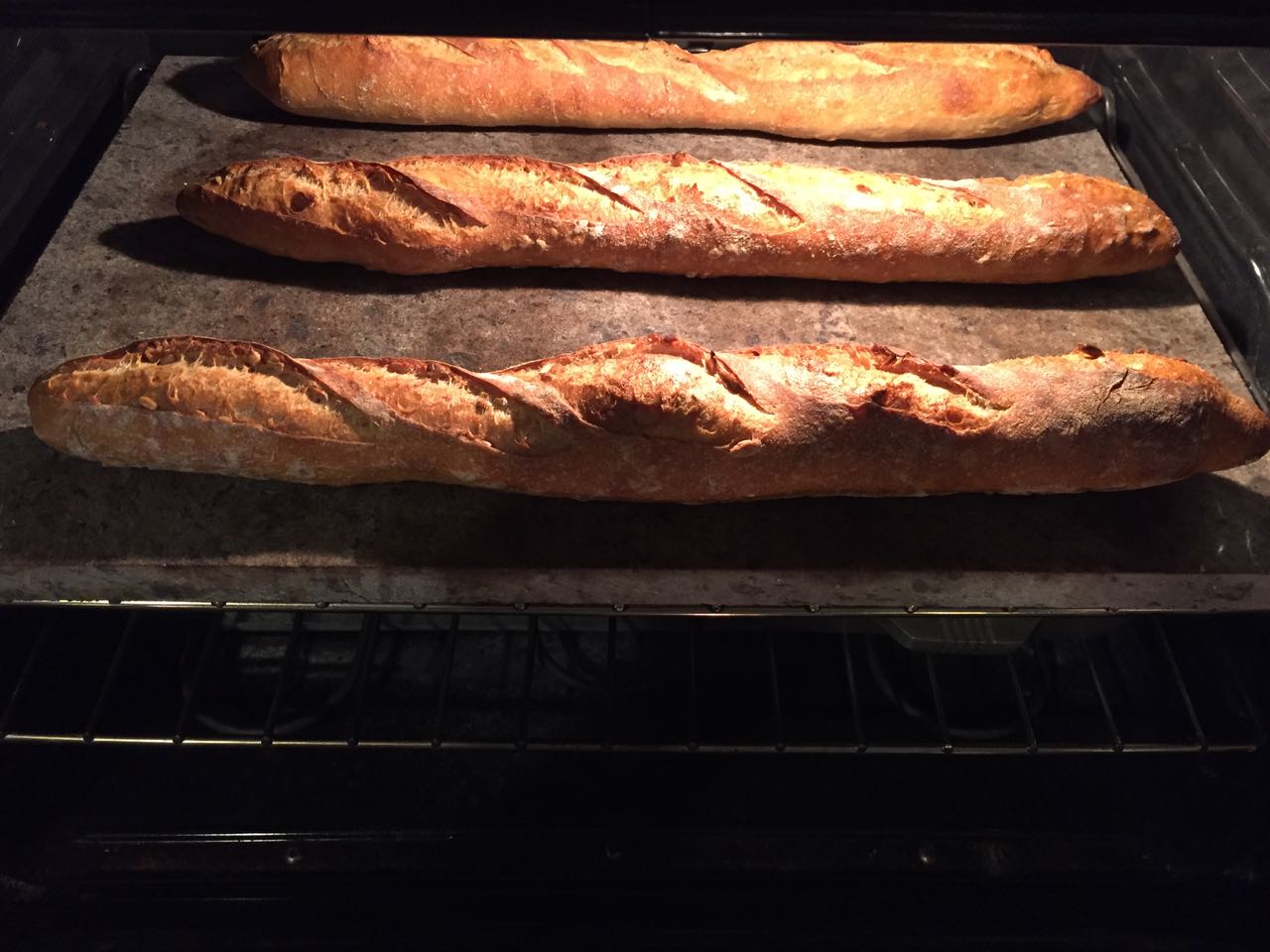 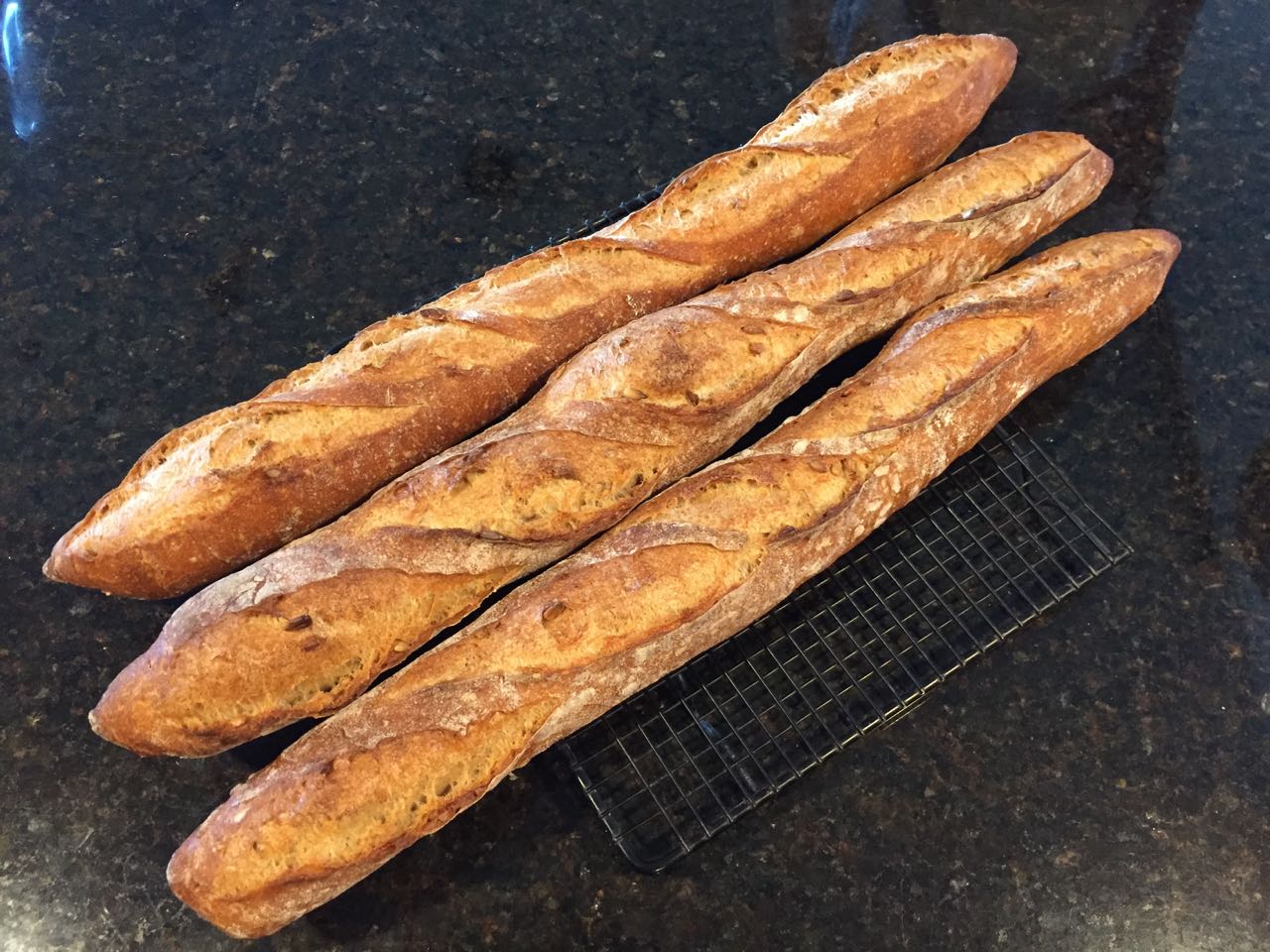 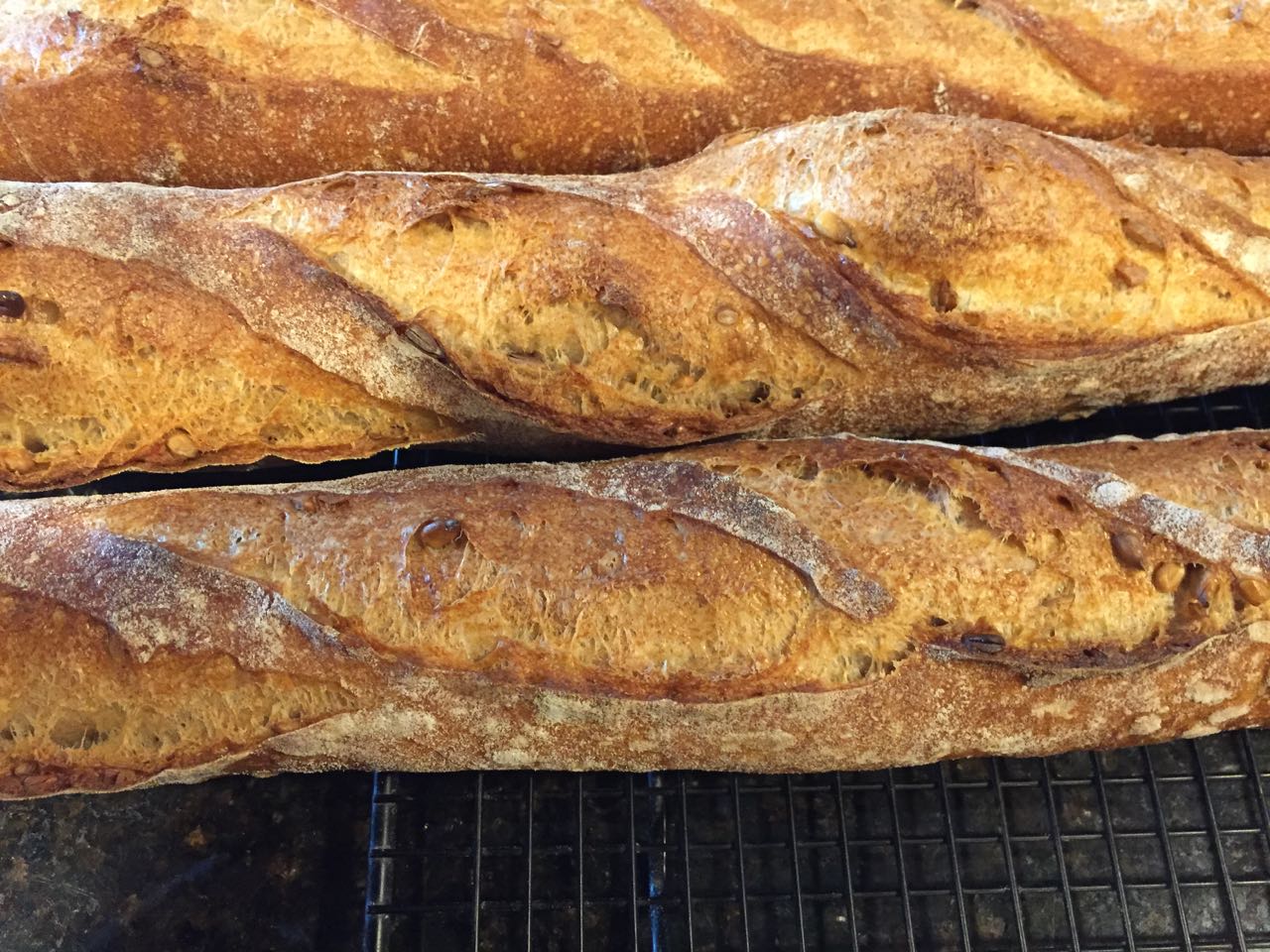 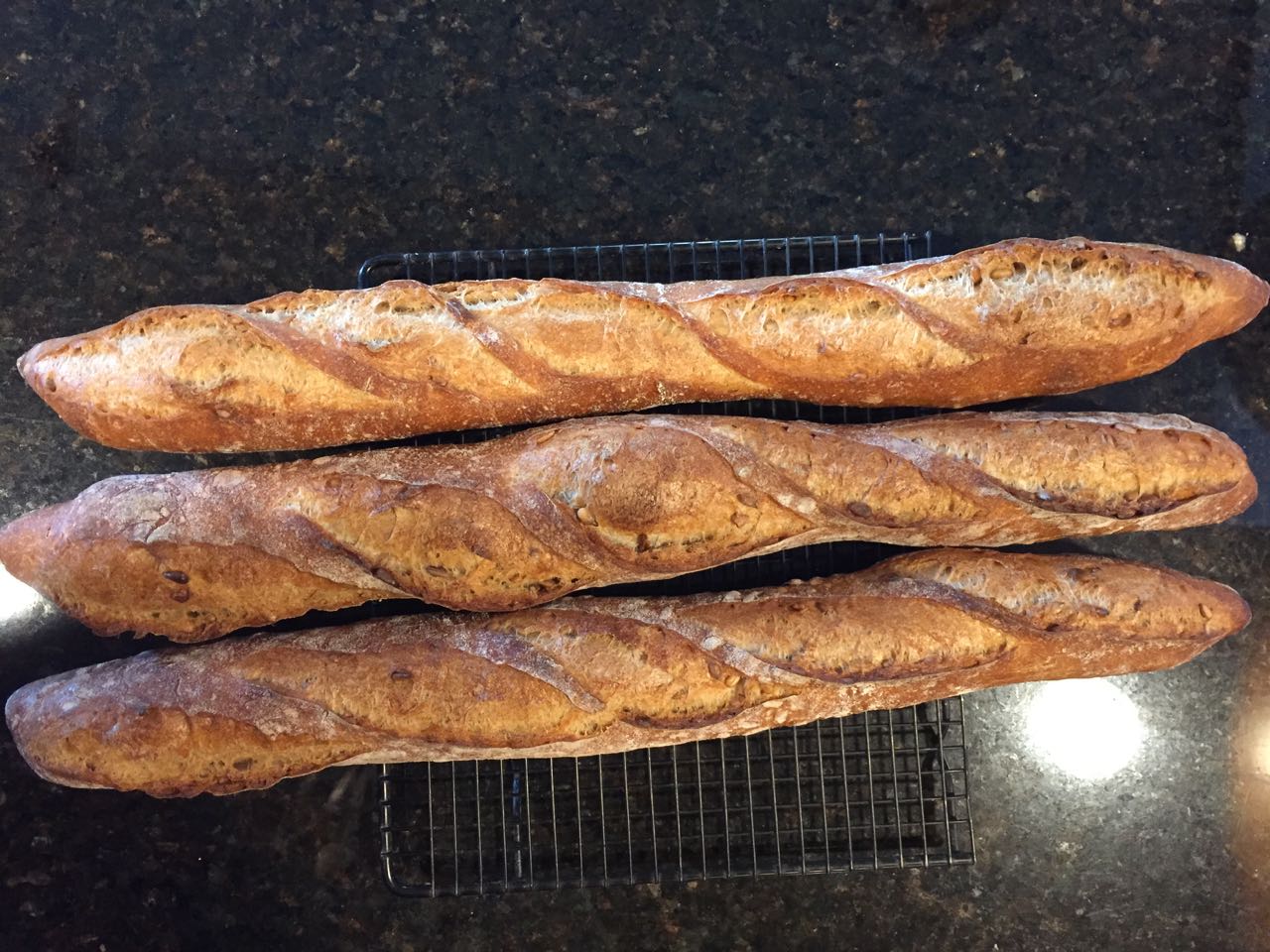 Here is a screen capture from Abel's video. 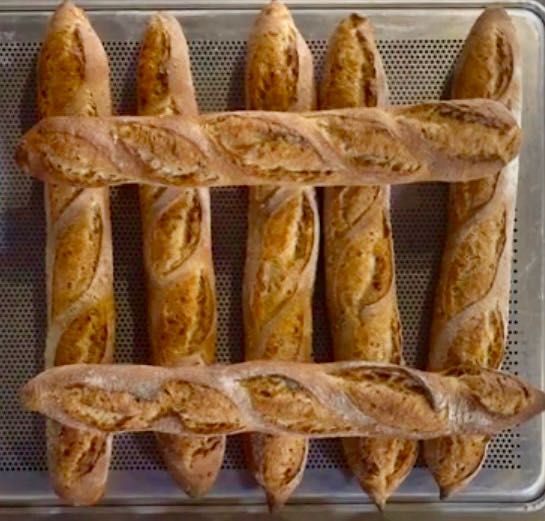 And the formula as given to me by Abel.

- Add levain, salt and yeast. Mix 7-8 minutes in slow speed, and then 3 minutes in second speed. Add seeds at the end of the mixing process.

- The temperature of the dough should be around 24-25ºC at the end of the mixing process.

- Shape baguettes and place over linen couche with the seam up.

Beautiful, your signature look in new and improved long form.  Seeds inside a baguette, must be super tasty.  Thanks for sharing the video of Abel, nice to see him in action especially since I’ve been making his baguette formula, but your version of it of course.

I find myself intrigued by most of what Abel posts, and usually end up giving his formulae a run or three. Just by an odd occurrence, I wound up making acquaintance with a good friend of his last year in Barcelona when looking into the tritordeum grain while there.  He has a friend with a bakery in Sunny Isles ~20 miles south of here where he had visited on occasion, so one day i look forward to meeting him there.  If this nightmare ever ends, we should take a ride down there one day when you're local.

I've made his baguette formula a half dozen times, but you seem to be exceptionally enamored with it, and results show.

That would be fun to do whenever it is that we’ll be able to travel again.  I do hope it is sooner than later, I will miss our month long winter stay in Fort Lauderdale.

I made a decision early on when I started to bake sourdough over a year ago that I had better repeat formulas many times in order to learn what works for me and what doesn’t.  So fortunately I found your post of Abel’s formula and ran with it because I wanted to use a sourdough levain but didn’t want full on sourdough flavour or crust/crumb characteristics.  The hybrid formula is really good tasting.  Once I finally 🤞Get the outsides of my baguettes looking more consistently as good as the insides I may try some other formulas, or at least try some add ins.  It is odd that somehow I can get the crumb but not the ears and grigne which is the opposite of what happens with my batards for which I now can get the outside appearance looking great but my crumb isn’t nearly as consistent.

Anyhow, you have your long baguettes very consistent now, it didn’t take you very long and they do look awesome Alan.

That Señor Serra has a fine pair of hands.  Fun to watch his shaping.

Of course, I run all 'Tubes at 2x speed (except John Oliver).  Life is short.

Stay well 'fanso and thanks for posting that.  Almost ww baguettes!

Hehehe. That's practice. When you have done hundreds and hundreds of baguettes, your hands work better.

In case you haven't noticed ;-) there's a ton of gorgeous going on at the CB, which still has some legs left in its, albeit slowing down.

I've mentioned this before - if someone (not named alfanso) were to organize, synthesize and publish the collected learnings and what's been produced, we might well have the universe's best baguette baking book and instructional manual in existence for the home baker.

The amount of material sought and derived, and lab work done with the goal of individual and group improvement has been nothing short of outstanding by all of the collaborative know-somethings in the CB.  I doubt there is a single person involved in the CB that hasn't walked away a better, more confident and knowledgeable baker.  The old "rising tide lifts all boats" on full display.

Your crumb is outstanding for this % of whole grains and especially with seeds inside.  I agree with your omission of the flax seeds as they don’t do anything for me.  I will have to add this one to the bake list soon.

Last week I made the same baguettes, but instead of Sunflower and seeds I added dried onion flakes and chopped walnuts. The result was amazing.