I recently got an ankarsrum and decided to make a double batch of Hammelman's challah. The Ankarsrum had a very hard time mixing this with both the roller and dough hook. The dough kept getting stuck and not moving past the dough scraper and just didn't do a great job. Any ideas what I am doing wrong?

I am not familiar with challah but a hydration of 32 even with al the add ons like the eggs seems rather dry to me.

I am not familiar with challah but a hydration of 32% even with al the add ons like the eggs seems rather dry to me.

My go-to challah recipe has an even lower hydration level than yours. I’m not an expert in the Ankar but I regularly mix my Challah with a KA.  The process I follow is all-in, including oil, because the %of oil is not huge at 9%. Your oil % is even lower at 7.5%.  In case it helps, in the KA I do an all-in mix of all liquids, solids and fats. 5 minutes on low speed and around 5 minutes on #3, until it comes off the walls and I have good gluten development.

What mixing pattern are you following with the Ankar? Best of luck anyway.

This is almost Hamelman's challah formula.  You're a little light on eggs and yolks which will reduce the dough stiffness during mixing.  The size of the batch and the stiffness of this dough probably put this at the limit of the (any) mixer's capacity.  Nonetheless, the Assistent should be able to handle it.

Have you seen p.9, 10 of the Ankarsrum manual.  They have a table with guidelines for mixing bread doughs.  You'll want to follow the recommendations for a higher flour volume than what you have due to the high stiffness of the dough.  You can always reduce the gap as you progress.

I have made this recipe by hand and with the Assistent--sometimes finishing off the dough by hand :)  The higher fat  (shortening) content both hinders and helps during mixing; reaching full dough strength will take longer than a lean dough.  If you are retarding, the gluten will strengthen somewhat more overnight if not thoroughly developed during mixing.  As Hamelman notes, folding shouldn't be necessary, but you can also add a couple, if you are concerned.  You can also up the hydration a little (say to 38-40%) if retarding because the cold dough will be stiffer than a warm one and still easy to braid when it's cold.  The crumb will be a little more open, but still dense.

Another option is to lower the proportion of high-gluten flour a little.  This will reduce the water demand of the dough and lower the viscosity (stiffness).  I have also made this bread with 100% bread flour; again, the crumb is airier, but still very dense.

Finally, if you still have problems, just cut your batch in half and do two mixes.

I strongly recommend Hamelman's book, if you don't already have it. 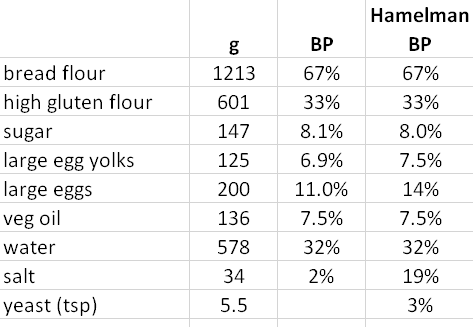