I wanted to know the effect of the maturity of the levain on the gluten structure since I’ve been hearing conflicting theories. I thus made three identical loaves with different maturities of levains (12 hours, 6 hours and 3 hours). I thought I’d post here since the results were interesting to me. Please feel free to discuss further if you have experience something like this, thoughts, comments, etc.

The loaves are made with 100% high extraction flour of the variety Ølands wheat (a Scandinavian heritage variety with a soft gluten structure, much like spelt) as this is a flour I’m currently experimenting with. They are 76% hydrated (taking the hydration of the levain into account) and made with 30% levain. The levain is 100% whole wheat, also Ølands wheat. Method in details below results for those who are interested. 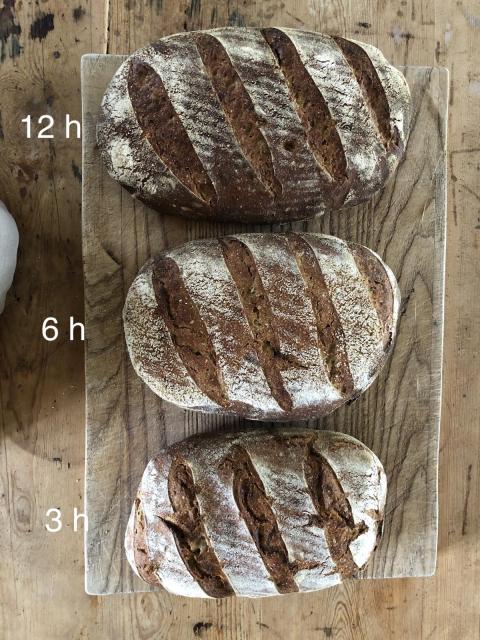 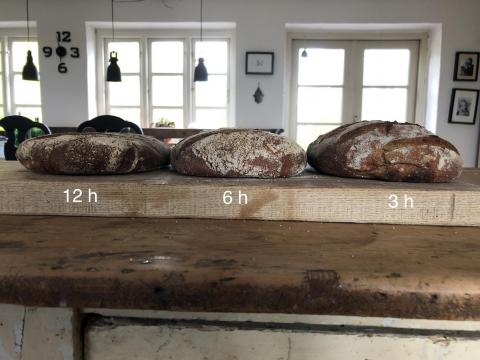 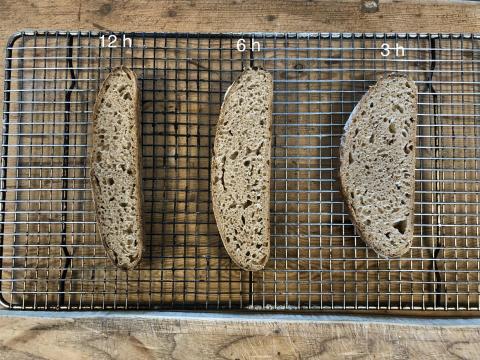 I was hoping for a visual difference in the maturity of the levain used, but wow, was not expecting it to be so much actually. It seems that the younger the levain the better the gluten structure (this was also apparent when shaping the loaves, the young was more elastic whereas the mature was more slack). For a moment thought that a young levain was therefore the way to go (as i have been struggling with building strength with this flour), but then i tasted them and this surprised me.

So I guess the conclusion is that the more mature the levain the more deep and complex flavour and less acidity, however also damaging the gluten structure. Personally i prefer a less sour bread when there is more whole wheat while i guess such a young levain bread would be nice of a sour-tasting whiter bread.

Autolyse 25 mins with salt (have found that too long autolyse, and without salt diminish the elasticity with this particular flour)

Mix in levain and preform slap and fold until gluten is well developed (about 4-5 mins). Bulk ferment at 25 C.

The 12 h levain dough finished first (after 4 hours) and i preshaped and shaped the dough.

Retard in the fridge for about 18 hours and baked one by one in the order 12h-6h-3h.

I’m interested if anyone has had similar experiences working with different maturities of levains or has comments to the results. If so please share them.

PS. this is my first post on here. I’ve been baking for some months now and looking forward to discussing more.

Hey, great post. And the results are more or less what is expected. The more mature the levain...the lower the pH....and using liquid starters, which favour lactic acid production......as you lower the pH, the gluten network will be adversely effected, but the pay off is a more developed, deeper taste profile.

I would like to ask for more info... what was the ratio feed of your starter in preparing the levain?  At what temperature was it kept? I am assuming the 12hr levain was at its max growth. What was the volume like for the 6hr, and the 3hr?

What I can recommend if you are really interested in exploring this area is to measure the pH of your levain/dough and to measure at each critical stage; when you are using the levain, when you mixed the dough, after the bulk rise.

Interesting you found the dough made with a young levain more slack because I had the opposite experience!  I usually use a fairly mature starter and I find the resulting dough has more structure during shaping.  What was your feed ratio for your young levain?

that your recipe isn’t rounded up or down to more easy to remember numbers.

Tartine Bakery, for what it's worth, uses a very young levain.

I have observed similar results in the bakery. I have worked at bakeries that use young levains and the dough feels elastic, stronger, and needs longer bench rest periods before shaping. I have also worked at bakeries that use very mature/ripe levains and the dough is strong in that it is well developed by mixing and folding however it relaxes much faster and has lots of extensibility when shaping. I would also characterize the mature/ripe levain doughs as feeling soft and the young levain doughs as feeling stiff even though the flour, hydration, mix, and fermentation are relatively the same