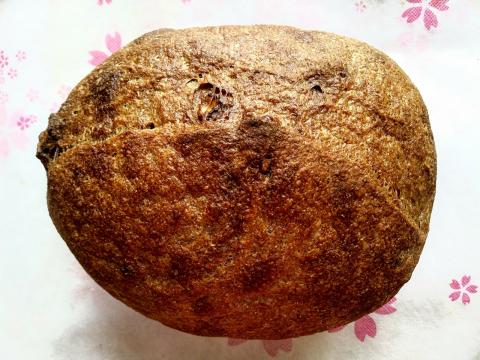 Admittedly, it doesn't look like much, but there is a story to this.

After baking >10 loaves of cheese bread in a row, I decided to take a break from it and whip up a simple dough instead. This dough contained nothing but water, whole wheat flour and salt. Ok, there were also walnuts but they weren’t part of the “dough”. Although the dough was well developed, I accidentally let it over-proof for quite a bit… Uh oh… Yet thanks to this, I now feel more confident about rescuing over-proofed dough. 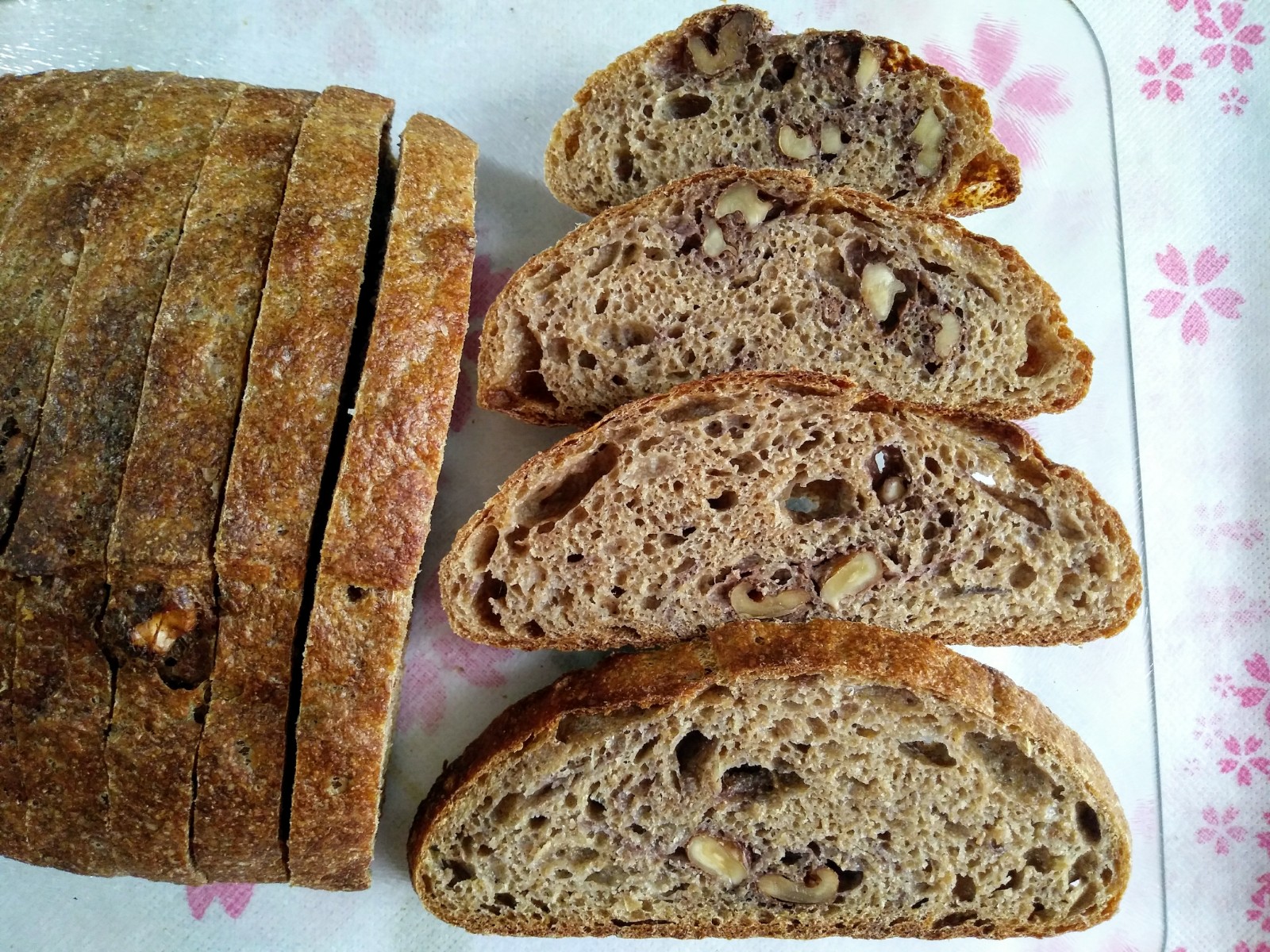 Sift out the bran from dough flour, reserve 30 g for the leaven. Soak the rest, if any, in equal amount of water taken from dough ingredients.

Combine all leaven ingredients and let sit until ready, about 6 hours (26°C). The leaven was more active than usual when used.

Roughly combine all dough ingredients except for the walnuts. Ferment for a total of 3 hours 50 minutes. Mix on low for 2 minutes at the 30 and 40 minute mark. Fold in the add-ins by a set of lamination at the 50 minute mark.

The dough was quite elastic by the end of mixing. It felt very “white dough-like” when compared with other whole grain dough I have worked with.

After the bulk, shape the dough then put in into a banneton. Retard for 10 hours.

When I took the dough out the next morning, it was ready to crawl out of the basket… It would no doubt collapse under its own weight and turn into an amorphous UFO if I baked it straight. Reluctant to give in, I gently poured the dough out and re-shaped it tightly. It was returned to the banneton and rested for 15 minutes before being baked at 250°C/482°F.

Bake with steam for 20 minutes then without steam for 25 minutes more or until the internal temperature reaches a minimum of 208°F. Leave to cool for 3 hours before slicing. 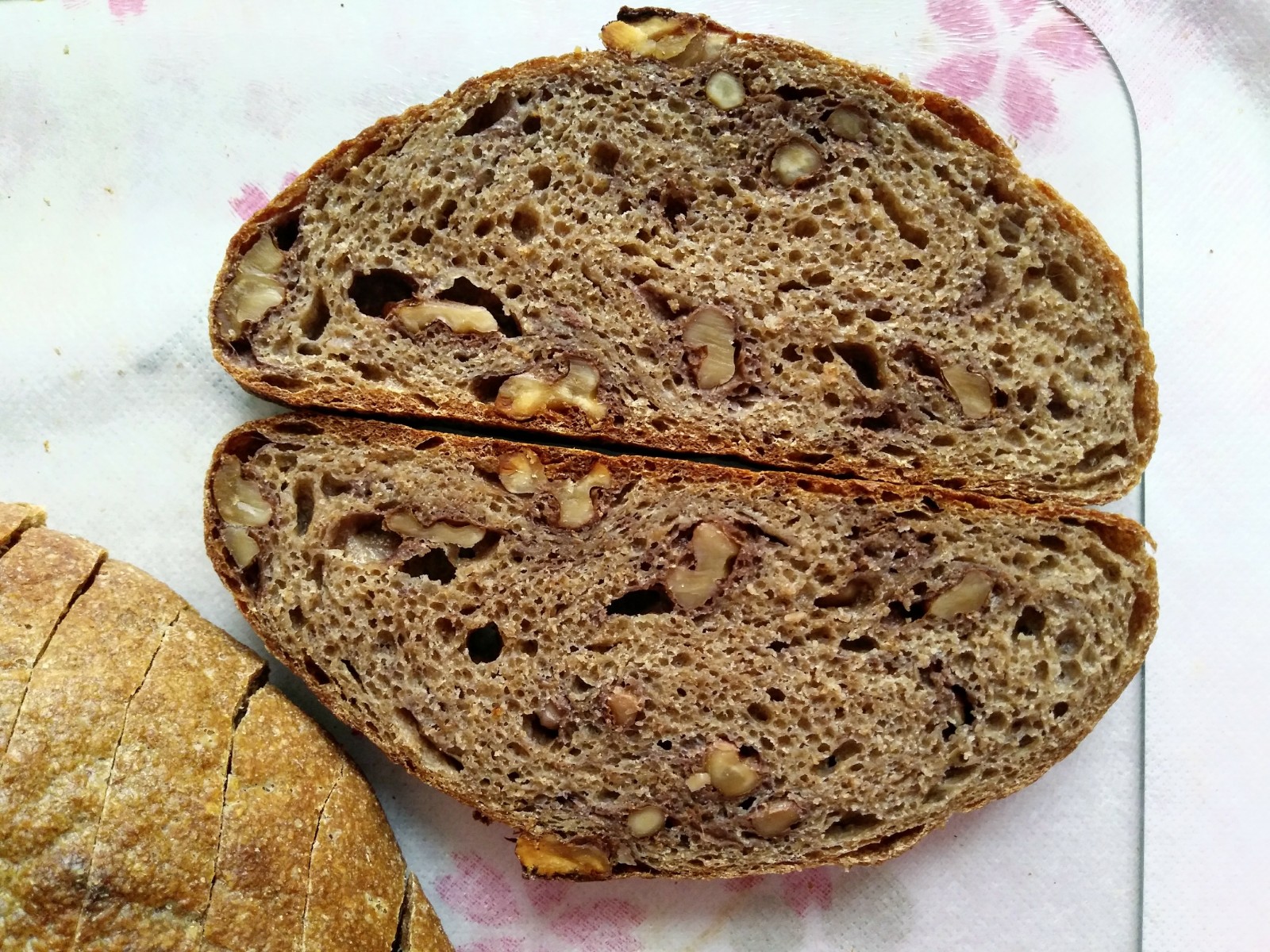 As anticipated, there was not much oven spring to speak of. That said, the dough managed to retain its shape despite being so over-proofed. The crumb isn’t very open but it could have been much worse. From now on, I would be adopting the same approach (reshape very gently + bake immediately/after a brief rest) for over-proofed dough. Of course, the resulting loaf can never compare with a perfectly proofed one… Yet let’s save the complaints for the moment :) 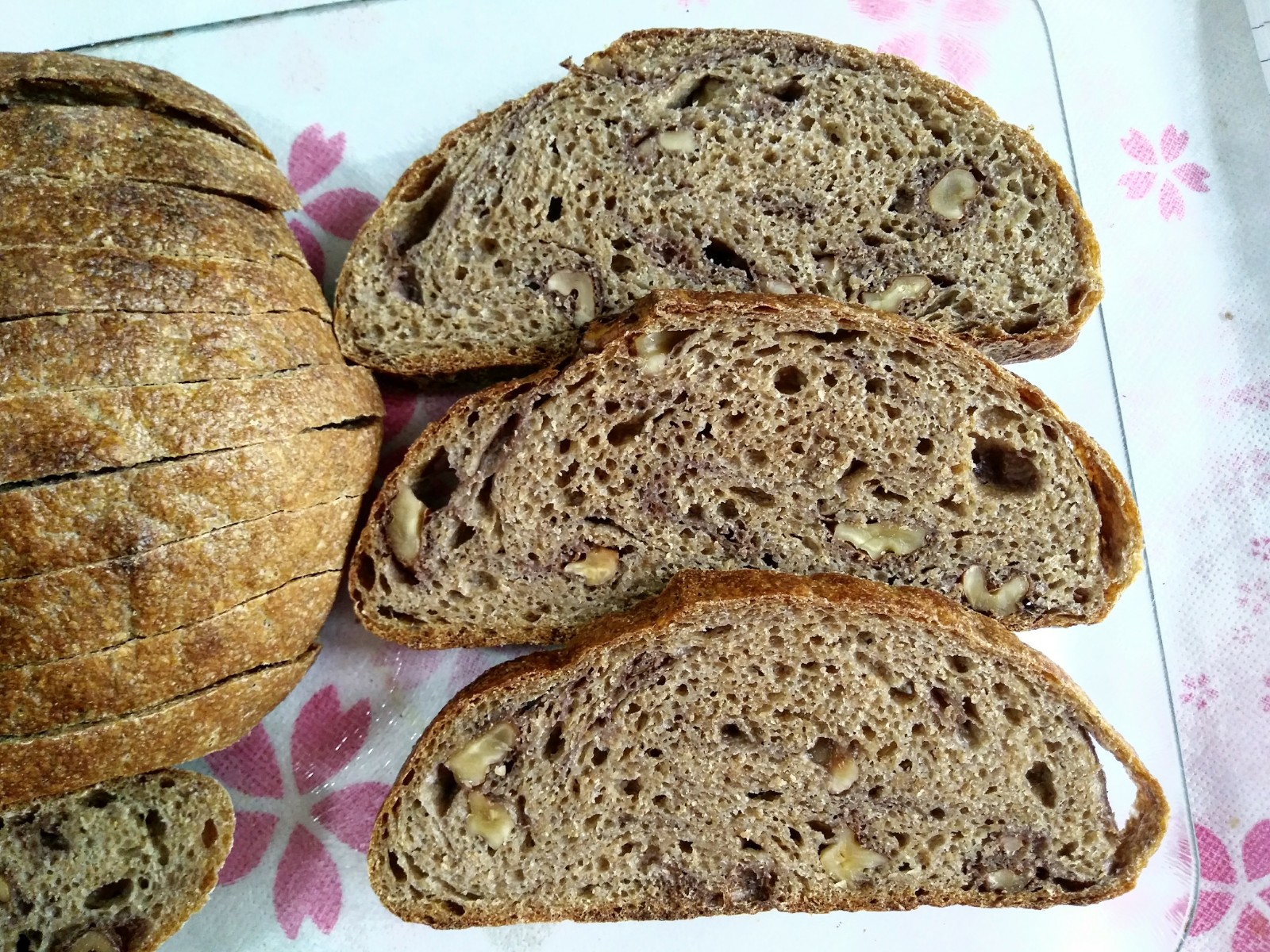 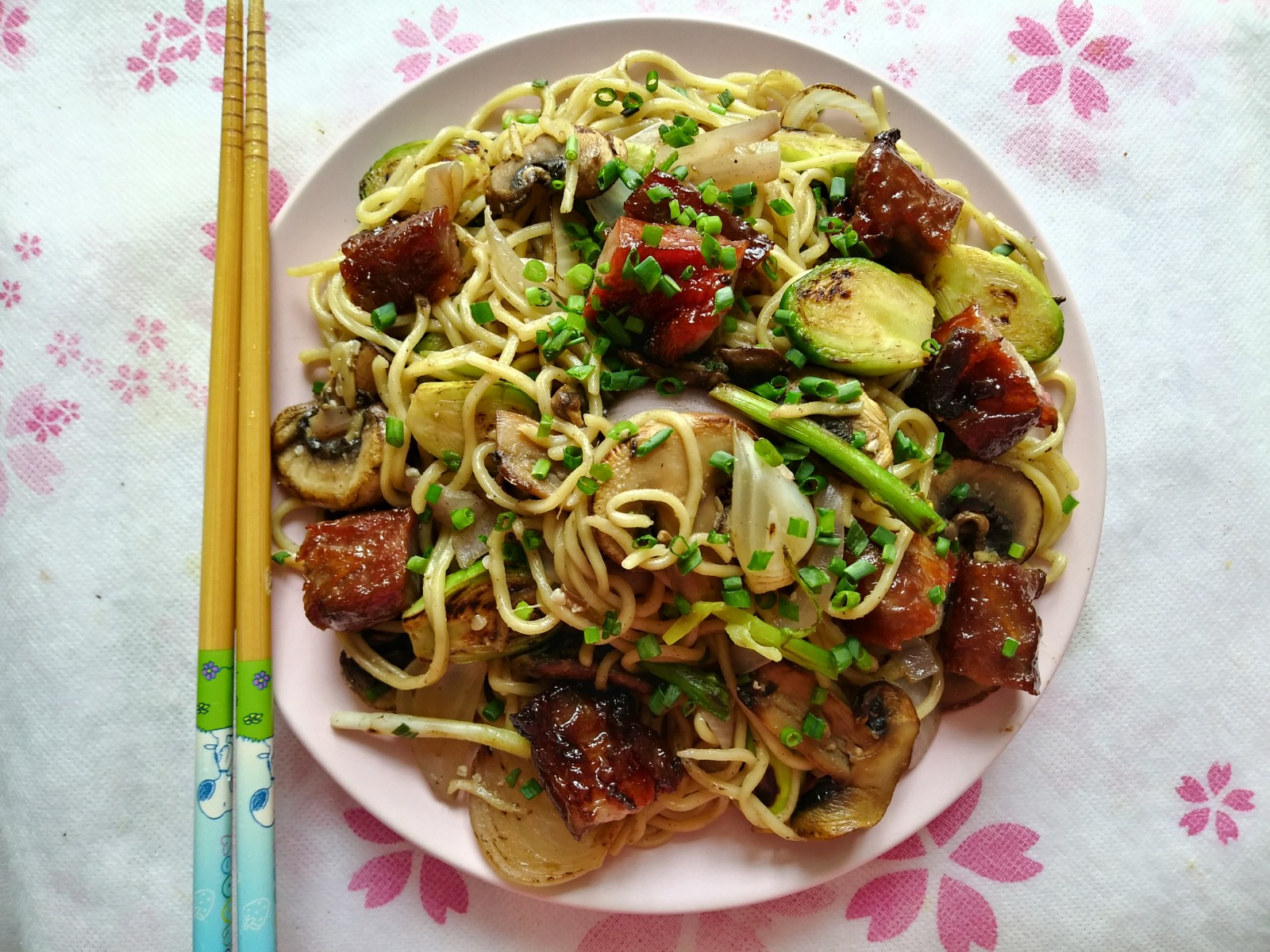 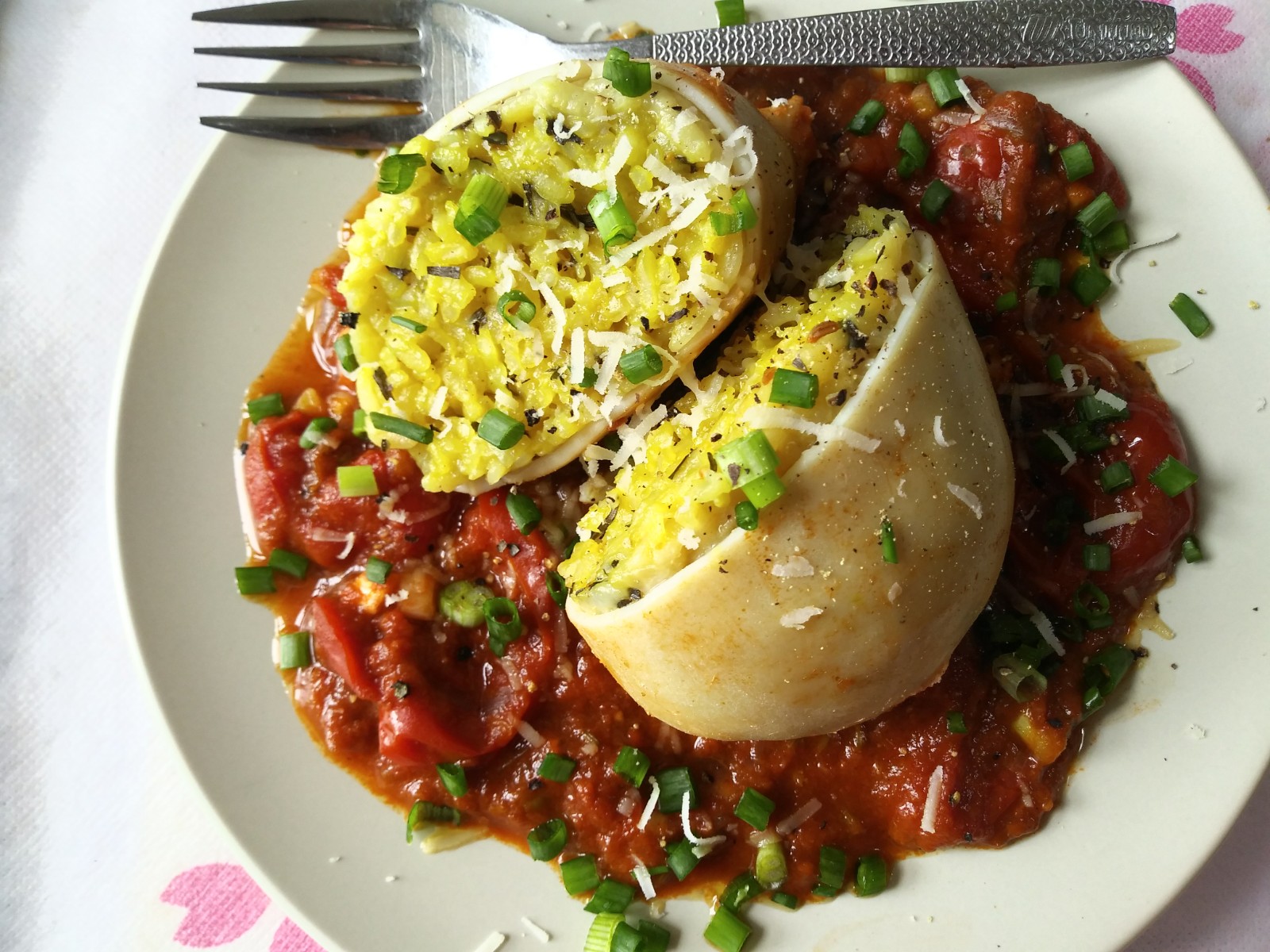 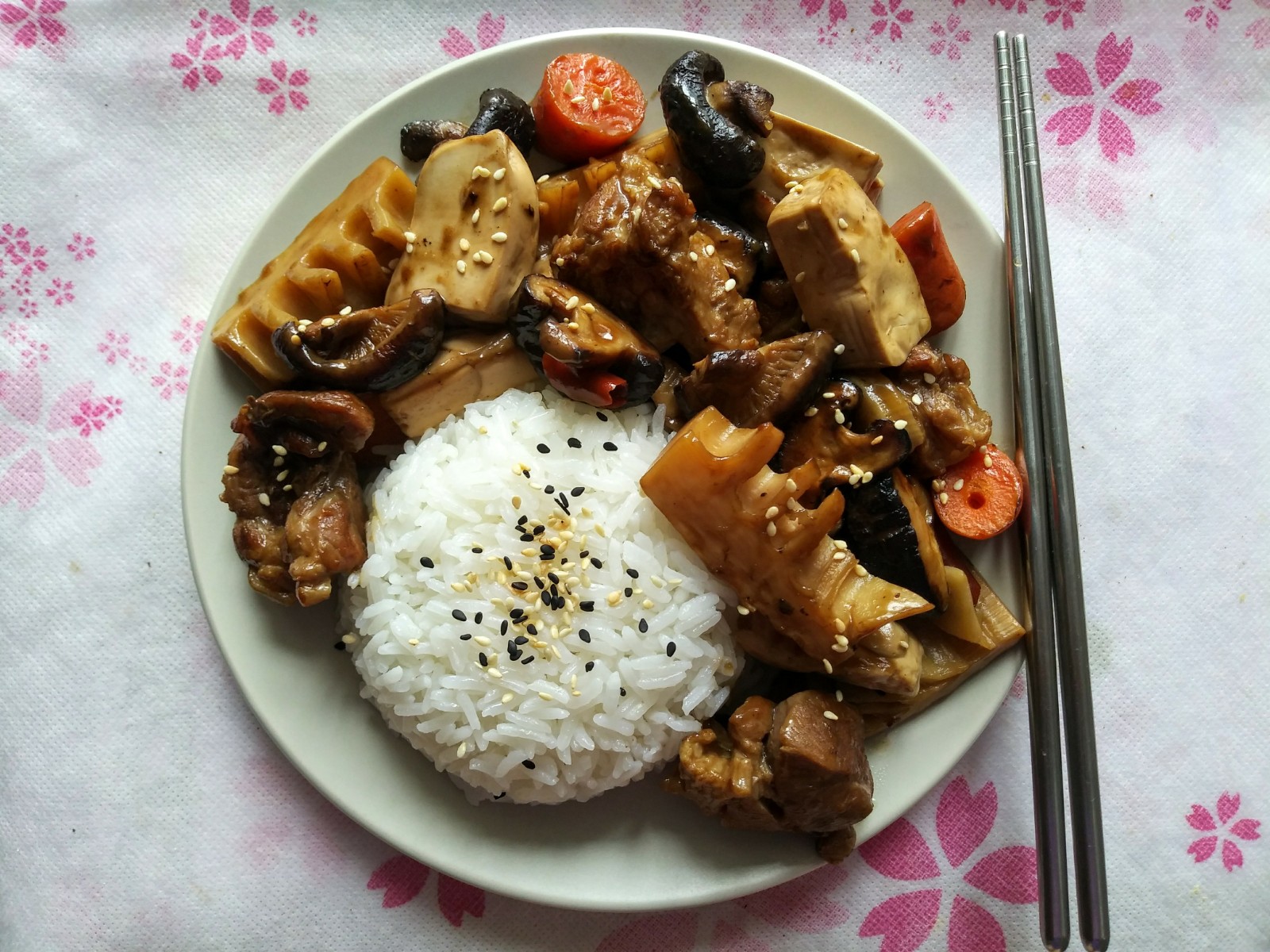 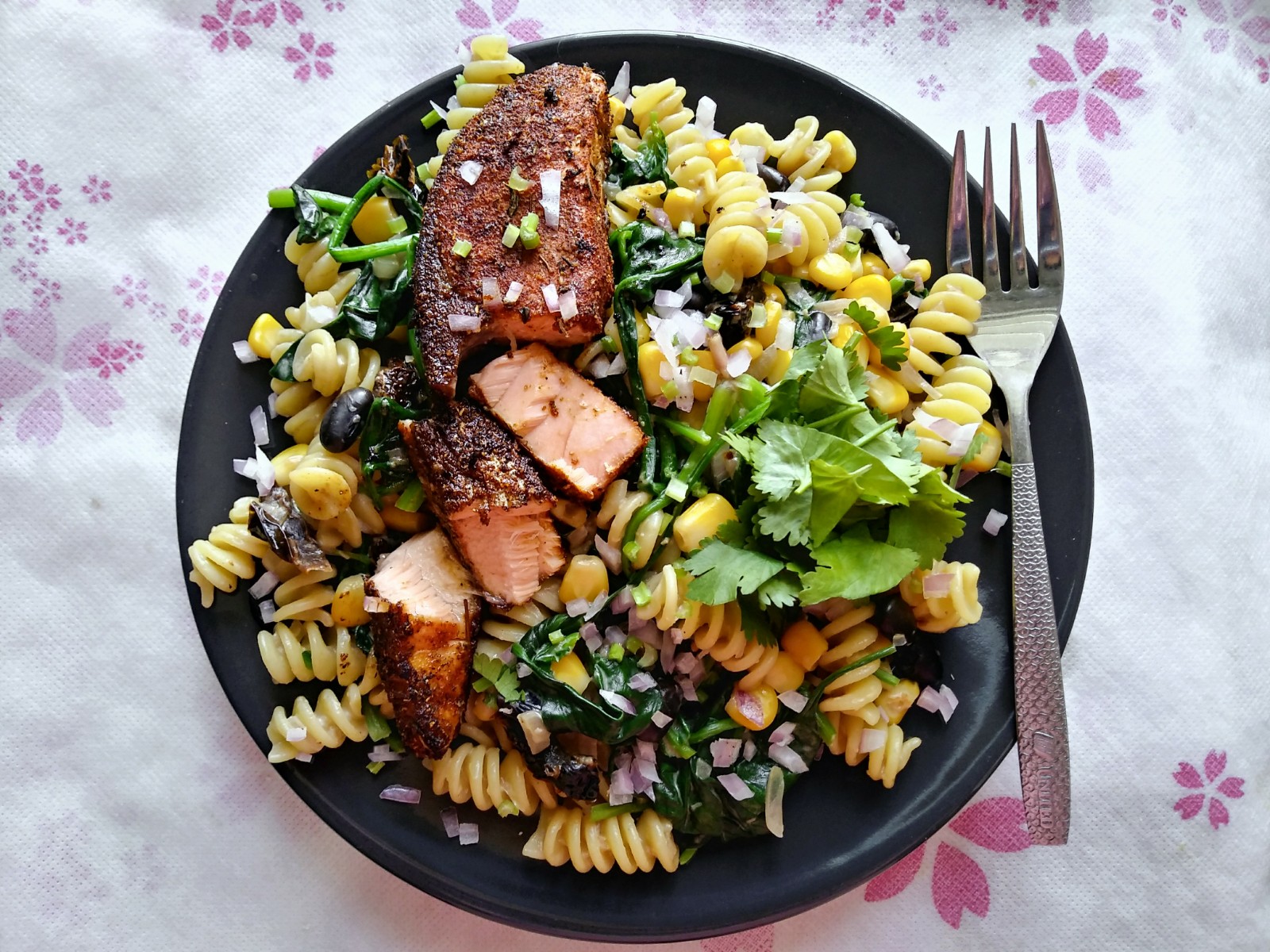 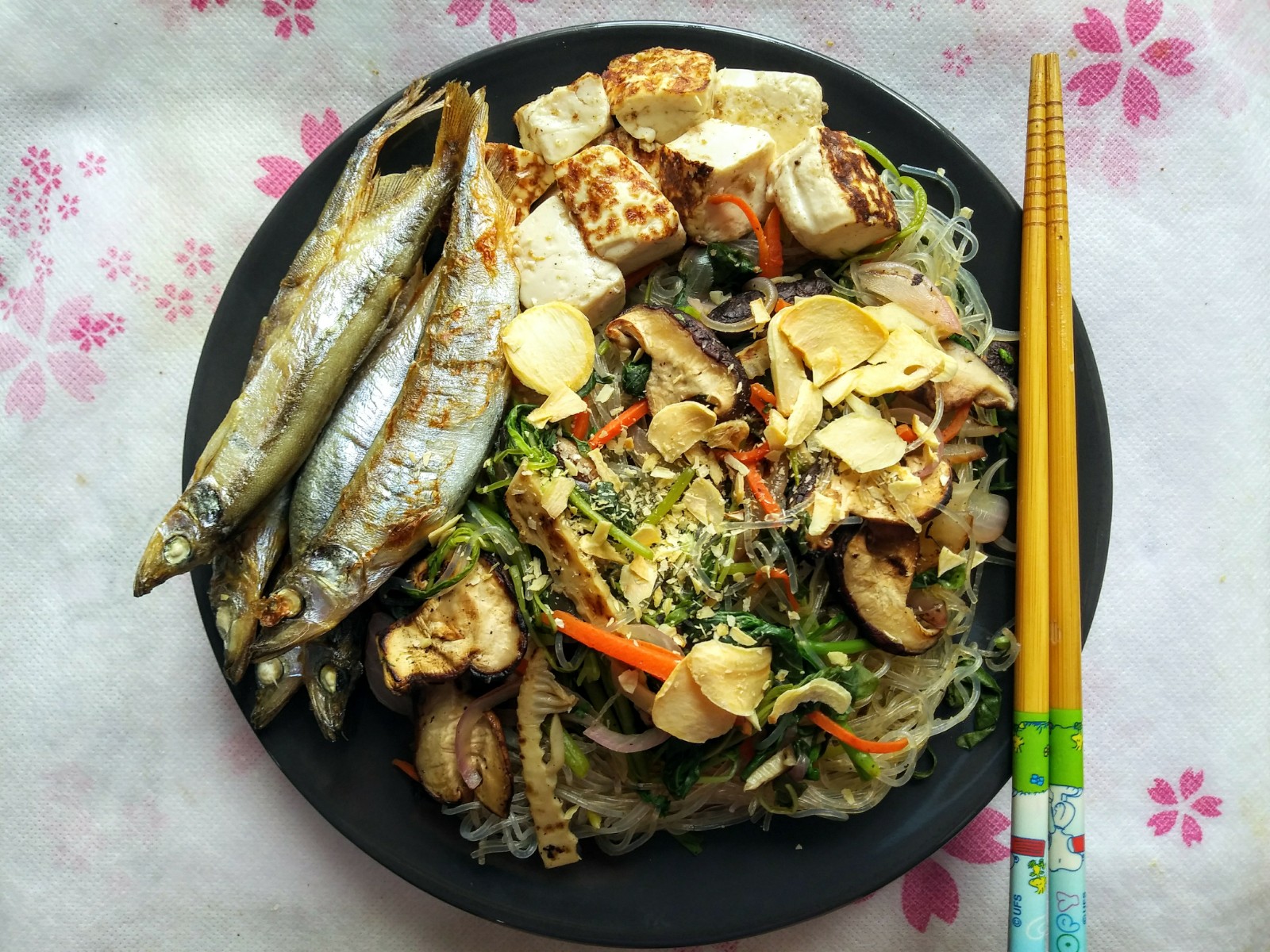 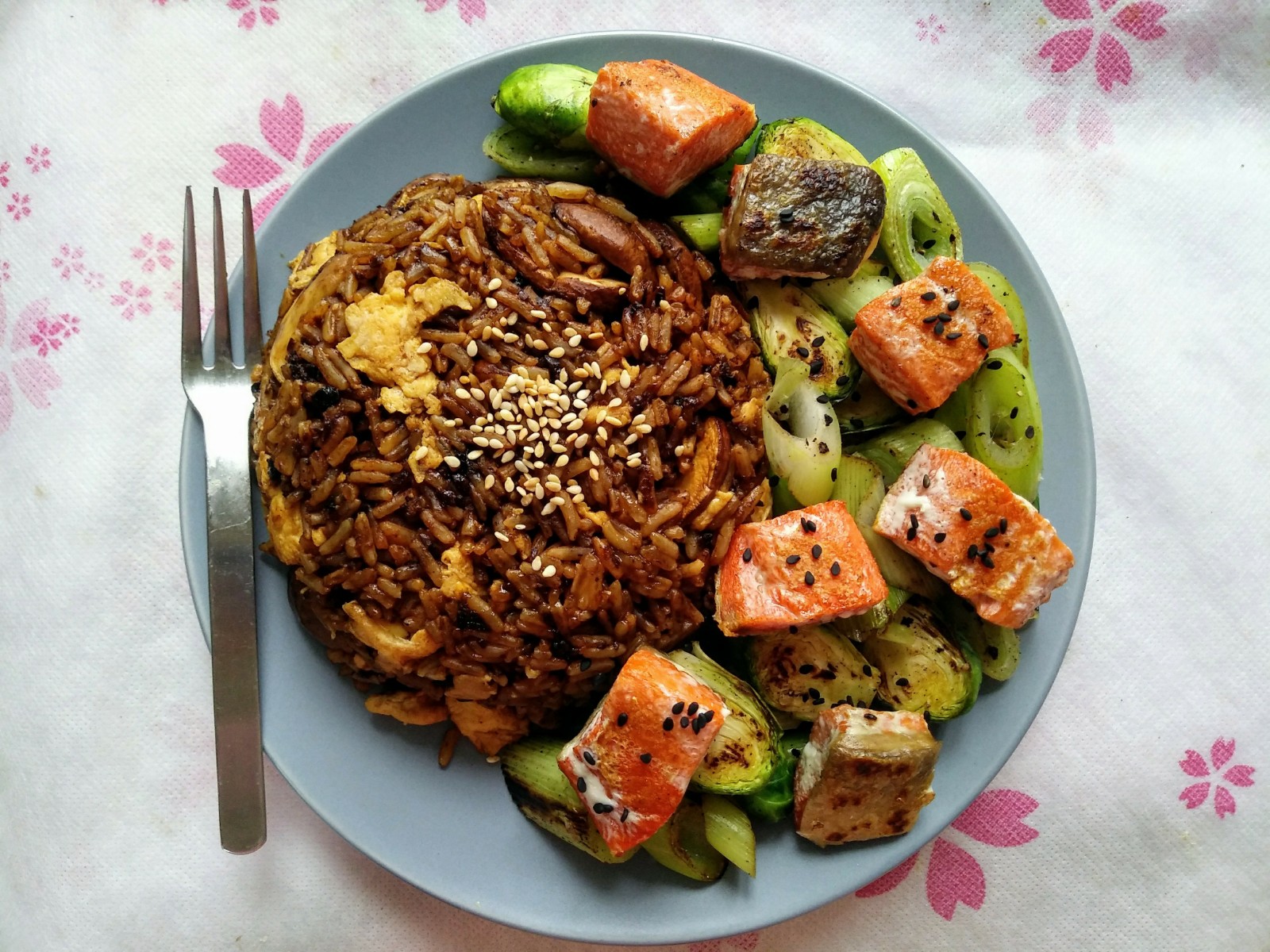 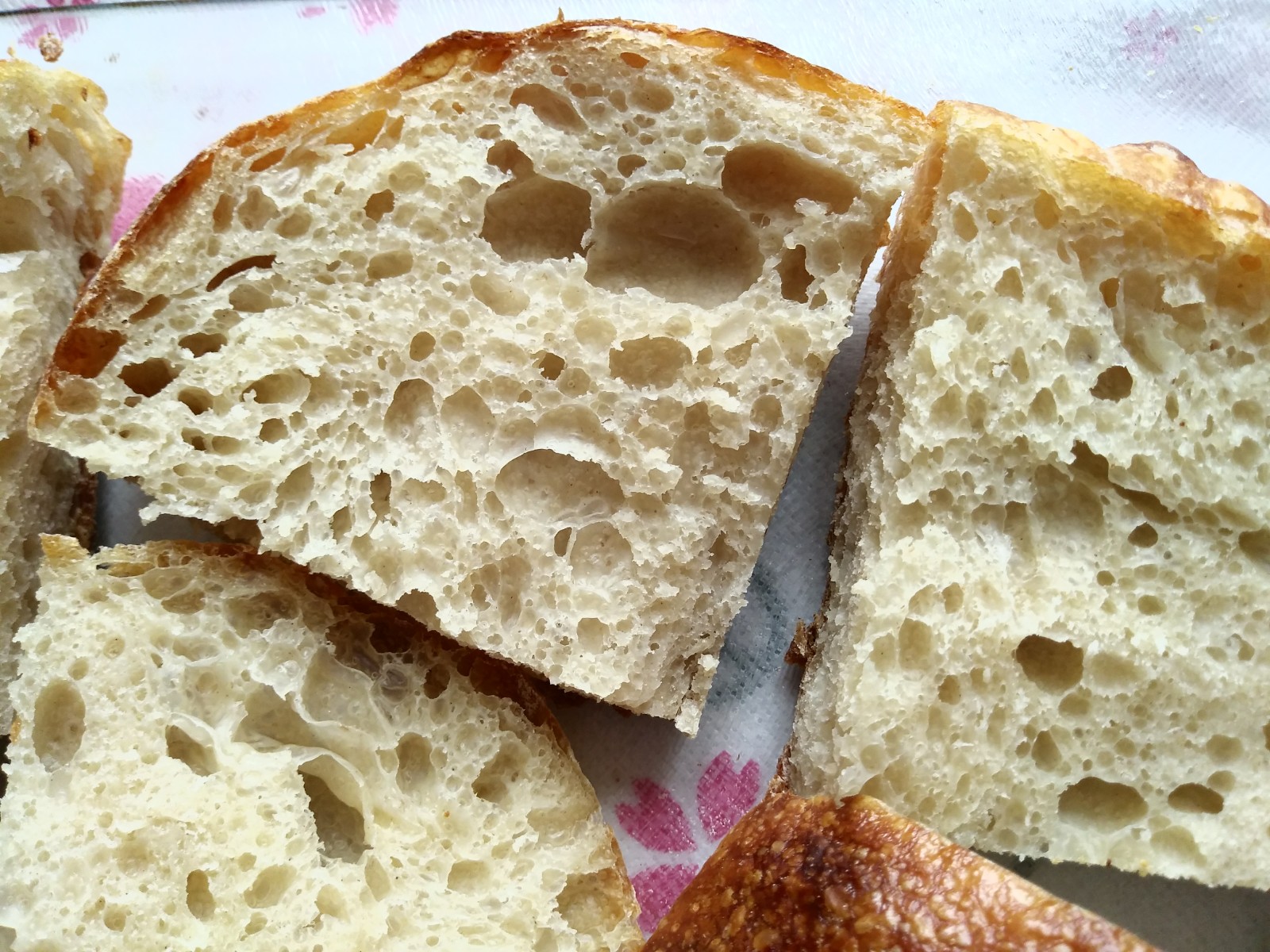 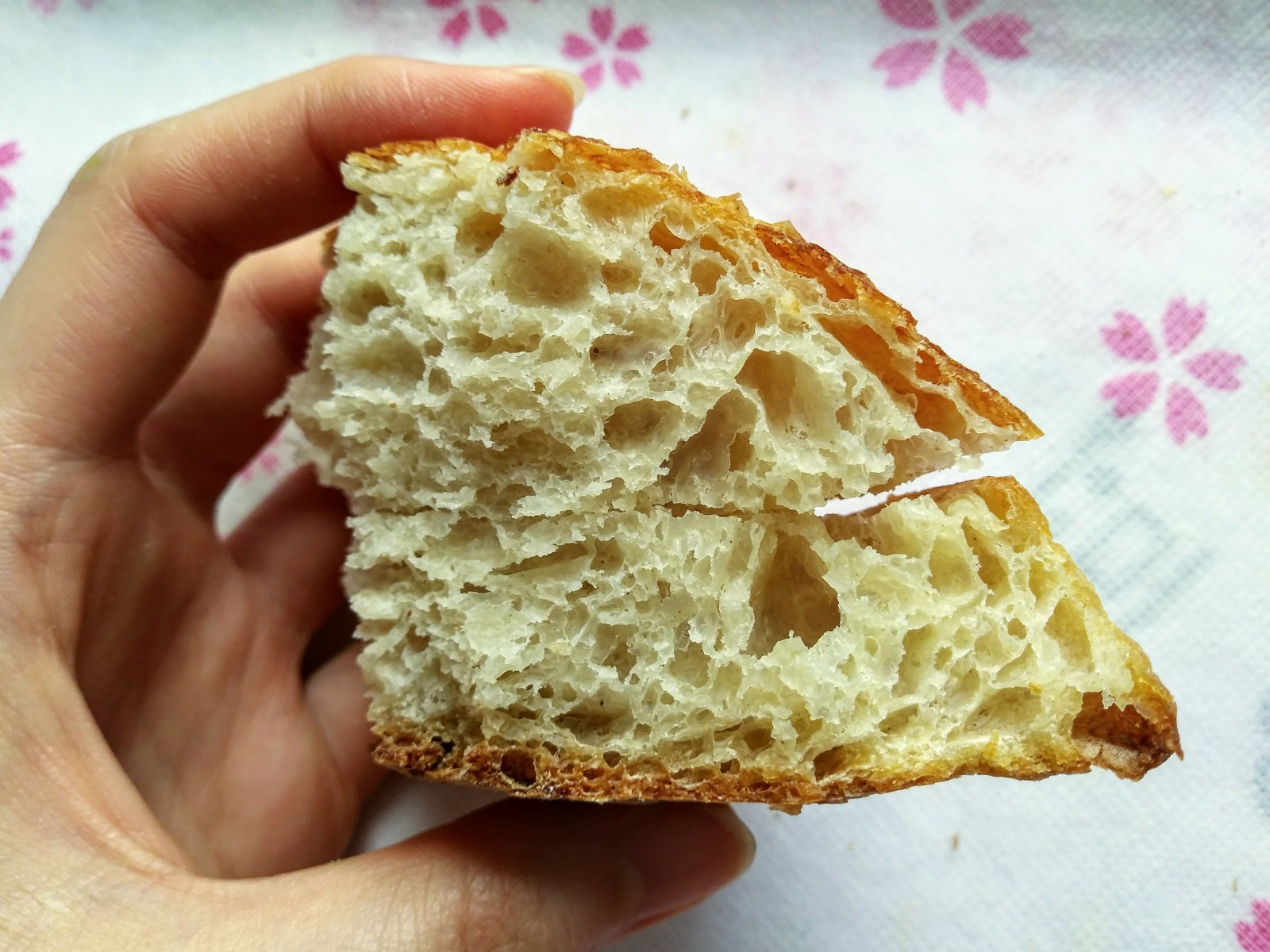 For a whole wheat bread additionally burdened with nuts, that bread has a lot of spring (and a nice airy crumb too).  Looks great, as does the rest of the food in the accompanying photos.  Well done.

as the bread looks nearly identical to when it was still a dough :) It was fully proofed after all, and as you said, weighted down by the walnuts. Thanks for the compliment nonetheless. I'm quite surprised at how the crumb turns out. It could have been more airy for sure, but that's too much to ask of over-proofed dough. The fact that it didn't collapse in the oven already surpassed my expectations.

Thanks for the praise, Ted. Wishing you and you family good health too.

Elsie great job saving your over proofed dough, there is something to learn in every bake isn't there?  Even though I've just eaten lunch 2 hours ago looking at your food has me hungry again.

I'm still beyond amazed at how much knowledge there is for us to learn. There is a sense of satisfaction you get from learning that can't be acquired anywhere. Especially since entering university, I can relate increasing to the saying that knowledge empowers people. Sometimes plucking up your courage to step out of the comfort zone is all it takes to discover something new. Gotta remind myself to be brave to bring about improvements.

Glad you like the food, Benny. 2 hours isn't a short time btw... It's totally normal to start craving food again :)

I just put two loaves of bread that I knew were overprooved into the oven. It didn't even occur to me to reshape! D'oh! Thank you for the reminder...

I don't (want to) remember how often this happened... We all know that over-proofed yeasted white dough can be punched down and re-shaped. Yet somehow I assumed that nothing can be done with whole grain sourdough. The lower fermentation rate and higher enzymatic activity concerned me. I was under the impression that the dough would have been broken down into a batter if it was knocked back to rise again. How come I never though of not degassing the dough? Better late than never!

Hopefully this can help us rescue future over-proofed dough. Not that I wish to use it often though. I mean, we all prefer to proof dough right, don't we? :)

Yes indeed. It would be better to do proper proofing.

These were very nice to eat, even though they didn't look pretty. I'm starting to think I should just make all my straight dough bread with spelt. It's so soft and fluffy compared to the hard red. I'm a little scared to use it in a sourdough, though: afraid the more fragile gluten will break down over the longer proofing time. Hmm. Maybe I should do a small test bake of 100% whole grain spelt sourdough and see how it goes.

told me a few things about it. Proper hydration and time control is crucial when it comes to spelt. It is noticeably more susceptible to proteolytic breakdown than any other grains so it can't be handled the same way. Nevertheless, it's such a treat to work with as long as we steer clear of over-hydration and extended bulk. The dough is always silky smooth and oh so extensible :)

Good luck experimenting with spelt SD. I see that you're having some success with kamut!