I'm cooking with a combo cooker, and there's a lot to like about it, especially in my convection-only oven. The crust comes out very nice. But I think I may have been taking this preheating thing too far. I preheat the combo cooker to 500 degrees, and am very quick with the load. You can hear the bread sizzle when it drops in, and today the cast iron burned a hot pad. Yet no matter what I do, the bread is coming out with virtually no oven spring, far less than I get with a pizza stone & steam. I know it's not gelatinization because when I take off the cover at 20 minutes, the surface of the loaf is still pale and moist. I am often guilty of some overproofing, but again, I get much more spring with pizza stone & steam.

I just learned that oven spring is primarily driven by the yeast, not steam inside the loaf. I had thought steam was the main driver, so I kept pushing to heat the loaf faster with more and more stored heat.

But the yeast dies at 132F. I'm now thinking I got so good at heating the loaf rapidly, I'm reaching yeast kill within two or three minutes of starting the bake before they can drive oven spring.

Has anyone else observed anything like this? I'm now thinking if i start the bake with a cold combo cooker, the time it takes to heat up the cooker will allow for proper yeast-driven oven spring.

There are other things at play here.  I went back and read your previous post, but I still don't have a good idea where you are at.

What are you comparing to what?  What did you do before, that was successful, that you liked, with this bread recipe.... then what are you doing differently now?  (we need you to establish that this recipe/formula does indeed produce oven spring, as you make it, in your home, in one of your ovens, in some other set of circumstances,  before we suspect/blame other things.)

Perhaps your assumption that the cast iron is too hot, is going to lead people down the wrong road.  So let's  back up a bit, and you paint for your helpers a picture of just facts/procedures, what resulted/came out, and then let's see where that takes us.

Has this bread formula you used here given good oven spring in previous baking conditions?  What were those conditions, ovens, baking vessels, etc..

Fill us in on which of your two ovens you  are working with.  But describe both ovens (again please) so your helpers don't have to look up the old post, and keep flipping/scrolling back/forth to see what the situation is.  I know it's frustrating to repeat yourself, but please make it as easy as you can on your helpers. D'zat make sense?

I think you're on the right track using a combo-cooker in a convection oven, to avoid the drying out from the fan.

Lemme suggest some things that you probably know, but just in case you, or future  readers don't know.   (I like to write for future readers, so please don't take anything personally.)

1) A convection oven comes up to _air_ temp fast because of the fan, but that does not mean that the cast iron is up to temp.  Because air heats quicker, much quicker, than cast iron. So... unless you wait 15 minutes (my s.w.a.g., could be more) after the oven says it's up to temp, then the cast iron did not reach desired temp.

2)  The effect is made worse if the cast iron cooker was covered during the warm up. It needs to be uncovered.  It will take twice as long to come up to temp it it was covered. (Cuz only half the surface area is exposed to the hot circulating air, when covered.)

I don't mind writing at length, only worry that others will tire of a lengthy discussion. I live at 5000ft.

Upper Oven - Pizza stone, lava rocks in a pie tin. Preheat, splash a half cup of boiling water on the rocks before load, half cup after load. This oven has a true bake, but it's so small a loaf with good oven spring just about touches the broiler element. I get decent spring, doubling or so in height, lifting the hardening bottom corners of the loaf off the stone. But I never get ears, nor do loaves ever "open" dramatically at the slash.

Lower Oven - bigger, true convection with no bake element. Worthless without some sort of chamber because the convection fan is hugely drying, turning crusts black before the inside is done, even with added steam. I use a dutch oven or combo cooker in this oven.

My standard batch that I make almost every time with minor variations is a sourdough at about 65% hydration with 33% whole wheat and 66% all purpose. It gets folds every 30 min during bulk, rests overnight in the fridge, and goes into the oven after 1-2 hours of final proof. It tends to rise a lot in the fridge overnight. I usually have some shaping problems- it doesn't want to hold shape, slumping down. I've reduced the temperature of the fermenter to 76F, and am gradually shortening all my times.

This last bake, I boosted hydration to 70% and used spelt in place of the all purpose. I had some really good tension/shaping results- it held shape very well on the bench, and when dropped into the combo cooker it held it's shape without slumping to the walls of the cooker. It was a bit overproofed by the finger poke test, but not yet pillowy or lacking in structure. The combo cooker was well preheated- the oven came to temp, and then I put both kids to bed, and THEN bread went in the oven. As I mentioned the combo cooker burned a cloth hot pad/pot holder it was set on! In general I have -always- struggled with less spring with the combo cooker for the exact same recipe, but this time I had -zero- oven spring, I swear it came out exactly as it went in.

Here's a crumb shot. Do you notice how there's a zone at the bottom of the loaf where it's especially dense? Seems to fit with my working theory of early yeast kill. 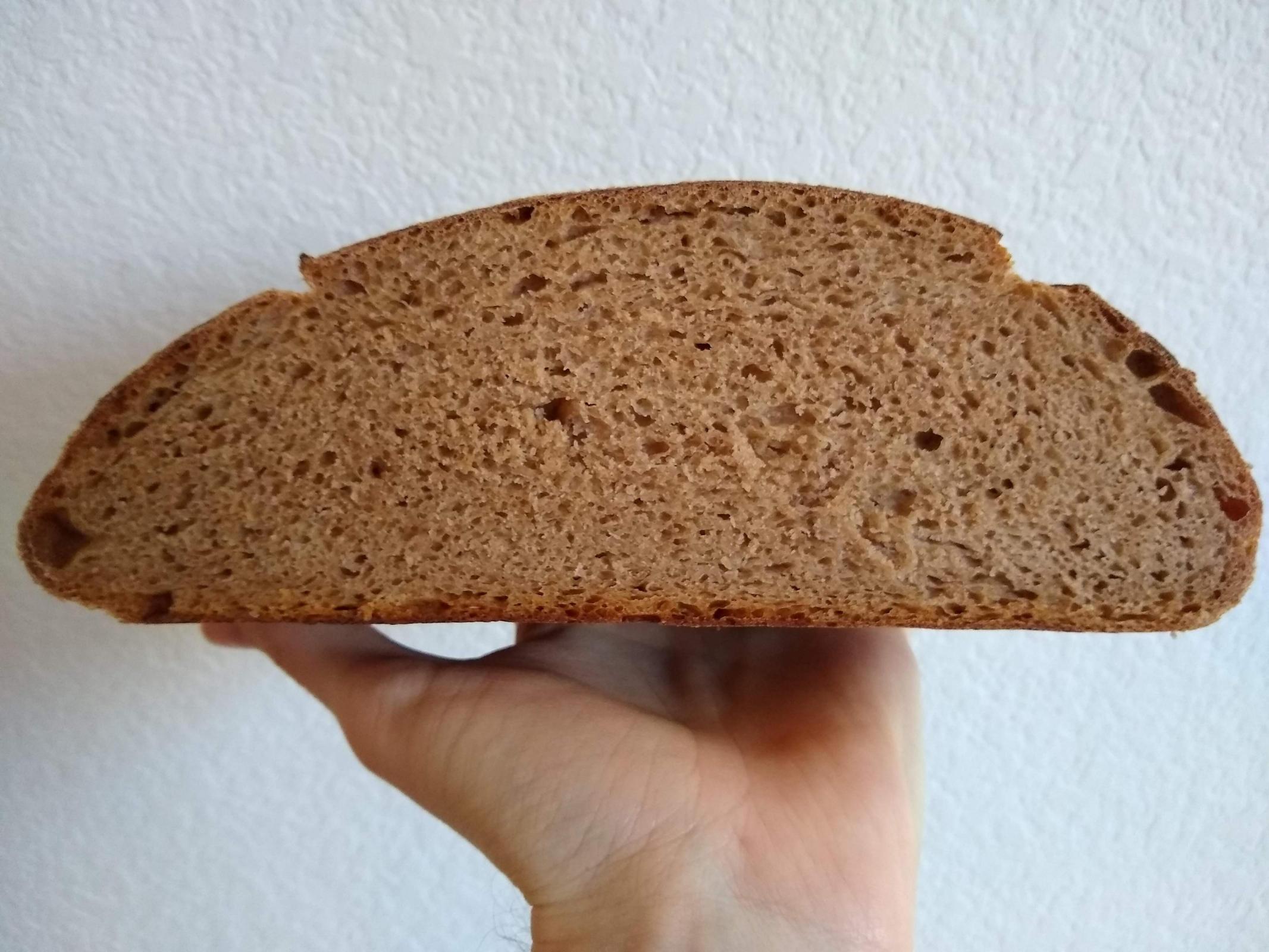