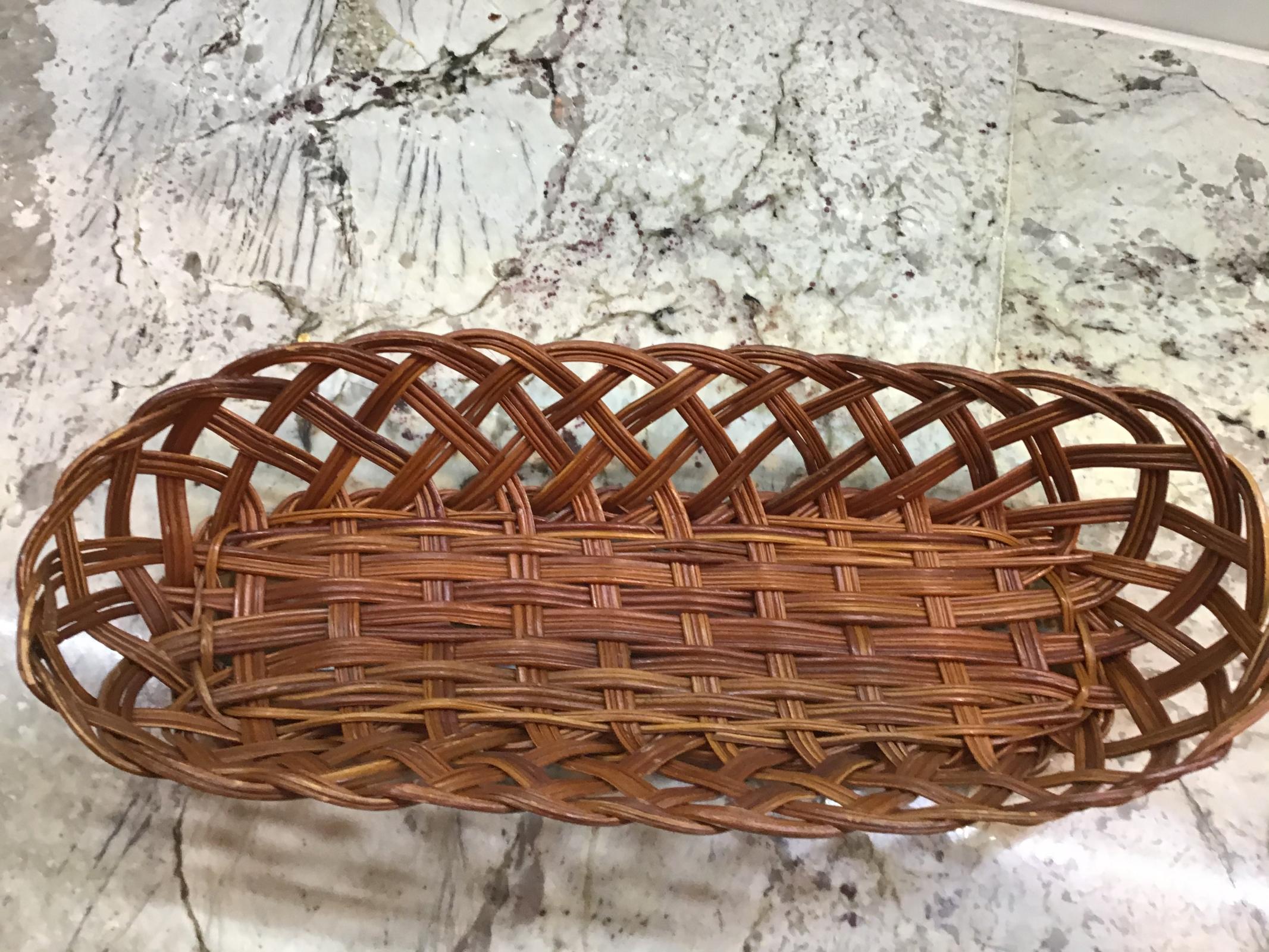 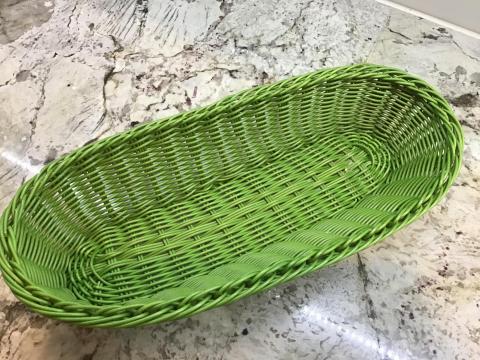 I must confess, as a newbie, I have a bad case of Banneton Envy.  Specifically Oblong Banneton Envy.  Is there any way to use these thrift store baskets for a batard which will transfer the pattern of the wicker to my loaf?
Share

The green one is perfect for that. Just make sure you dust it well enough and make sure it's not some highly poisonous color :D If you want to be on the safe side, put a thin fabric (like a linen towel) dusted with flour over it. However, then the pattern doesn't show well, if at all.

The brown one should work too, but I would use it only for lower hydration doughs (like 60-65%), otherwise it might spill through the holes.

Speaking just for me, I would not trust either one as food safe, and would use a linen liner.  Some moisture is still going to get through, so I would test with a bit of water and see if anything comes off.

I have  bleach washed both of them and there was no leaching.  The green one is plastic.  I attempted to dust it and the flour does not adhere to the sides at all.  Maybe spray oil followed by flour?

And then sprinkle your rice/AP flour mix on top. I use a mini kitchen sieve. Let dry and then sprinkle with more flour before placing your dough in them. I used plastic baskets for a long time before I was able to build up my stock of bannetons.

And I like the basketweave patterns.  Would like to know how to successfully transfer them to my dough.

The pattern you seek would only be flour remnants from the baskets or cane. Oven spring will remove any irregularities on the surface

I know just enough about plastics to cause confusion... :-)

There are food-safe plastics, and there are plastics that are not food-safe.  And, there are some that are safe for dry food, but not for moist, wet or oily food. It's not just a matter of inks and dyes leaching.  Non-food-safe plastics can transfer chemicals in the presence of oil and/or moisture, or even if no moisture/oil is present.  A prime example is trash bags. It's the cheapest plastic available, but you would/should not store food in them.  Hopefully, that is common sense for most people in industrialized nations.

A certain country-of-origin, which is where most of our cheap commodity goods come from now, is known for not correctly labeling things, and for occasional poor quality control due to taking short-cuts.  Does anyone remember the poisoned dog food episode?

So... is a plastic "decorative basket" actually food safe?  Absent a specific label, I'm not sure what the common-sense assumption should be.  And, more often than I would like, it seems that certain country-of-origin takes short-cuts, sometimes cheats, and sometimes does not use the kind of common sense that we would expect of an industrialized country.

I would suggest a thin, heavily floured "flour sack" type of towel, double layered, to line your baskets.  And not too wet of a dough, so that no moisture bleeds through.  The patterns will still likely come through the towel.

You have great ideas, and always ask great questions.  Keep thinking  "outside the box."

I've been using inexpensive bannetion from Michaels for years now. I did, however, get some unprocessed linen from the fabric store and my wife made covers.  I dust them with AP flour and it allows a good release when I transfer them to my peel.  I've been given a few bannetons from Breadtopia for Christmas.  All of them come with linen covers as well.

Community Bake: Naturally Fermented Buckwheat...
Flours Used for Starter
6 or 7 Bananas Banana Bread
Sorry! I know this is a starter ? re: Forkish’s...
Amount of dough for 9x5 loaf pans ?
END_OF_DOCUMENT_TOKEN_TO_BE_REPLACED