In trying to understand the mechanics of how to achieve certain types of crumbs, I pushed my bulk rise a bit in hopes of achieving the characteristic lacy crumb. I think I got it! 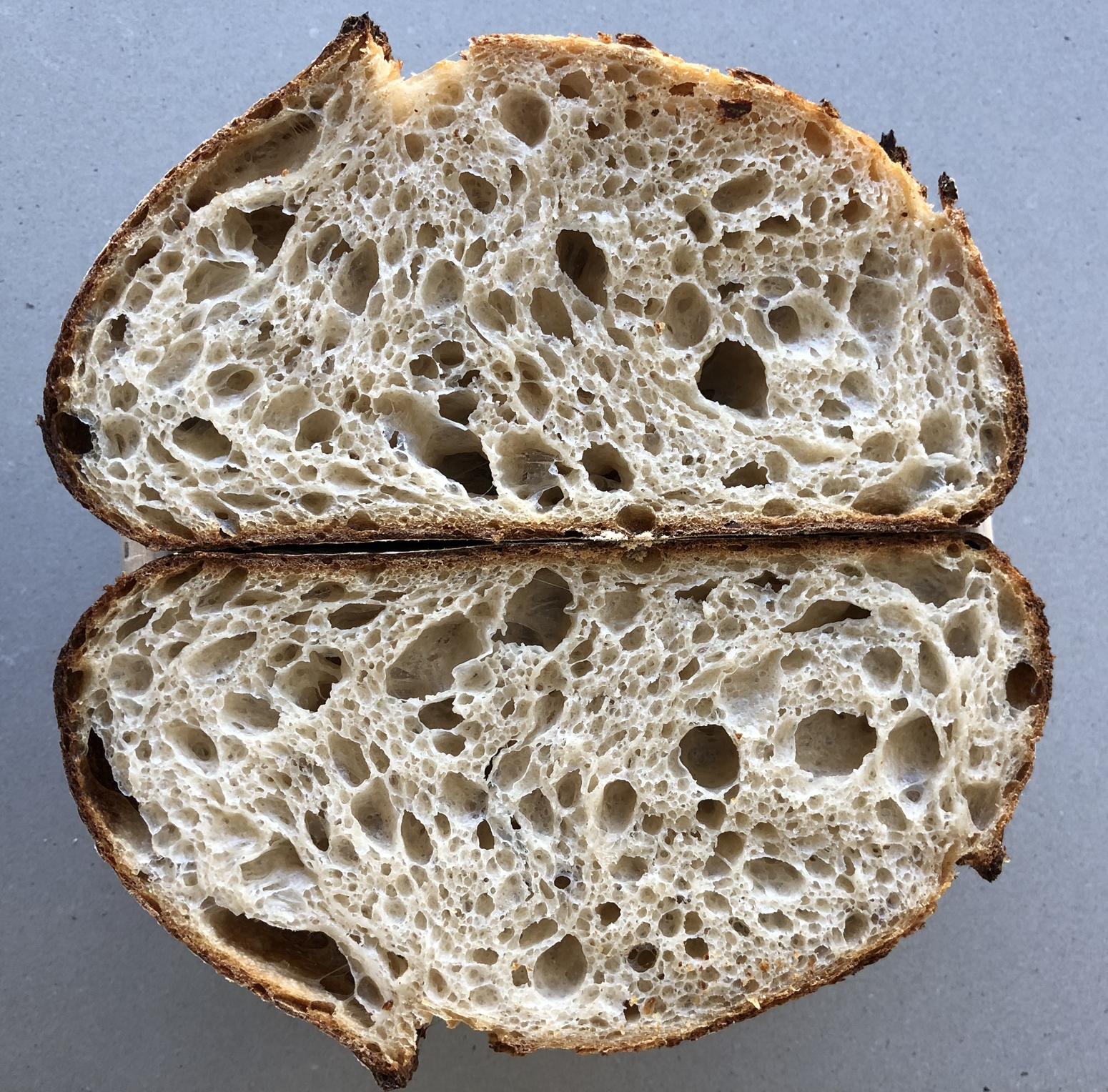 You absolutely nailed it!

Honeycomb Lace is the ultimate crumb in my opinion. I think it will (or should) become the “Instagram Crumb” of the future...

It seems that different add-ins have an affect on the laciness of the crumb. Things like flaxseeds and oats when soaked, enhance the characteristics.

Please keep us posted of your progress.

I agree! It just tastes better too. Slightly more tangy.

The bonus really is in the texture. It's SO moist. It holds on to moisture much better than the open crumb. This is the goal henceforth!

Will continue to share future bakes on this blog!

I think you got it too! That is my idea of the perfect crumb, congratulations. Could you expand a little on just how you "pushed the bulk rise a bit" and any other details of the bake you would care to share,

I used the Brod and Taylor proofing box for the first time this round, and it really gave me great results that I anticipated as I was working in bulk and during the retard.

After the first fold, I let the dough bulk at 76F for one hour. Then I waited another hour to do the second fold.

Now, for the third fold, I had to run an errand that took longer than I thought it would, so I performed it 2.5 hours after the second fold.

I waited for another hour to perform the bench fold, then 45 minutes to shaping.

At 76F, this definitely pushed the bulk. From when the levain hit the autolysed dough to when I put it in the fridge, it was probably 8 hours.

Let me know if you have other questions!

2 Cats and Alan, would you be interested in participating in a post dealing with Lacy Honeycomb style crumb?

If either of you start it, I’ll join in, or if you want me to get it going I can PM both of you when it is published. I am on a diet right now. Gotta keep things under control...

It may take place in a couple of weeks. I’m not baking during the diet.

I’ll PM you and any other interested bakers to make sure to are aware of the post. I’d love to learn more about lacy and honeycomb (more moderately sized holes)!

Your progress is moving along nicely...

Yes.If you would like to start it I'll be very happy to join in. I will look out for further info.

Great Alan, I’ll PM you once it is posted.

You really got this one!

Two:  You may have sold, or might sell, some people on the B&T proofing box.

I'll use this opportunity to make a link to give webmaster FloydM a few pennies for an Amazon referral:

(To do that with any Amazon link, delete _all_ the "junk" after the 10 character "ASIN"
and then add: ?tag=froglallabout-20
)

I got a B&T proofing box for Christmas.  I'm using it to get my starter active and then tomorrow for the levain build and proofing of the dough.  I'm hoping it will help a lot with proofing.  The weather has been super cold today so I'm glad I have the proofing box.