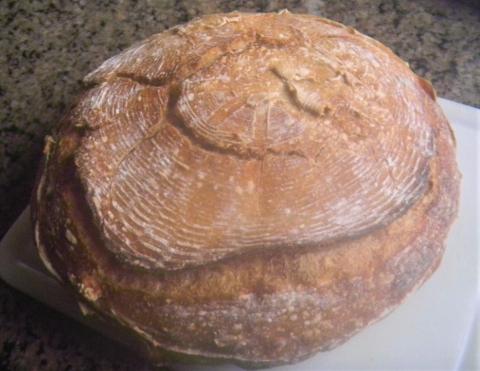 Well, it sure has.  Thanksgiving has come and gone and so has Christmas.  The photo above is a very white SD Chacon of 7% rye and the rest KA bread flour at 78% hydration using 15 g of long stored Rye NMNF starter  -that was lurking at least 4 months in the bottom of the fridge. 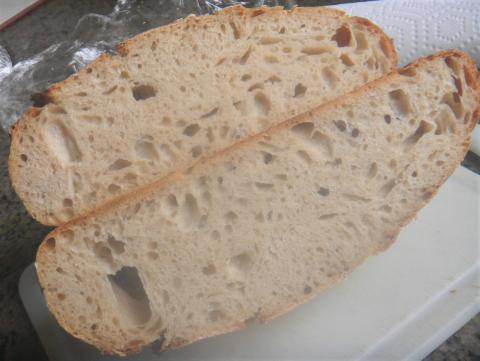 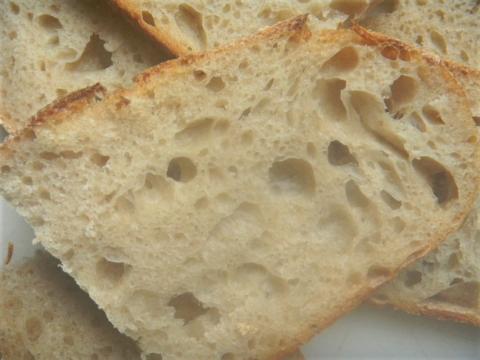 The great and wonderful Son in Law was her e so I finally got to showing him how to make a SD bread using very wet dough to boost his knowledge and experience,  The Chacon shaping was new for him but we covered slap and folds stretch and folds and shaping the non Chacon part if the dough.  This one was proofed on the counter after a 4 hour retard.    The 2nd loaf was a gift that my daughter was giving to a friend in Seattle with 120 g of newly refreshed 66% hydration NMNF rye starter. 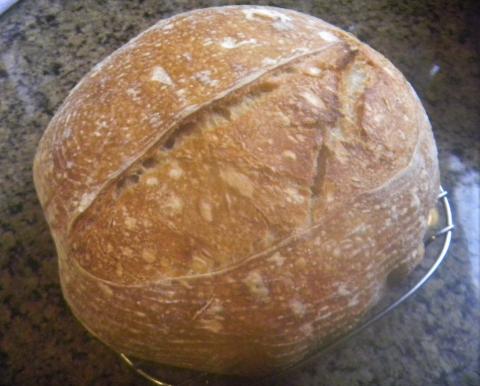 This friend wanted a loaf and astarter to get her on her way to making great SD bread too!  Hers was a mix of red and white wheat with some rye at 10% whole grains.  We let this one proof in the fridge for 14 hours and we took it out as we fired up the oven to bake it.  This one was scored. 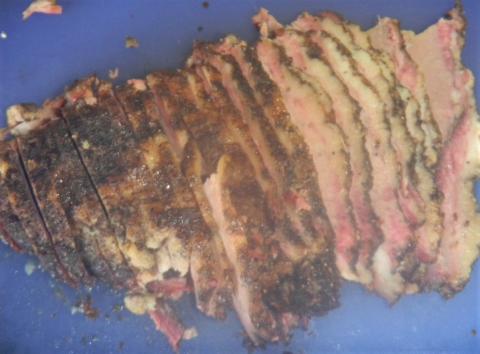 The brisket flat sliced perfectly.  The decadent point disappeared so fast I couldn't get a shot.

Both were baked in a Combo Cooker since I got one for my SIL last Christmas.  20 min at 465 F lid on and 15 min at 425 F convection.  Forgot to spritz them so at least that didn't change.  They both came off the bottom of the cooker 5 min after the lid came off and finished right on the oven racks and baked to 208 F 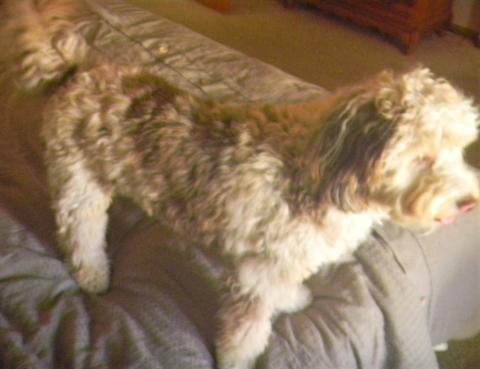 Mabel the Magnificent. She's and 11 month old AussieDoodle.  The sweetest Baby ever! And the nearly 16 year old Lucy sound asleep. 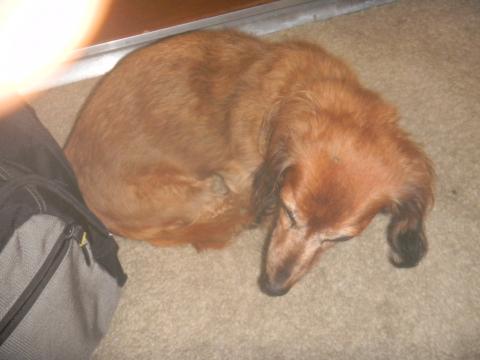 78% hydration is too much for a Chacon with 72-763% about right so it didn't really pop like it normally would to reveal the design.  The score also sort of sealed itself up because it was so wet -  so no gringe on the other one either.  The crumb was just the way we like it.  Soft, moist and glossy with various hole sizes.  Both of these would be called classic SFSD 's,  The Chacon tasted terrific. 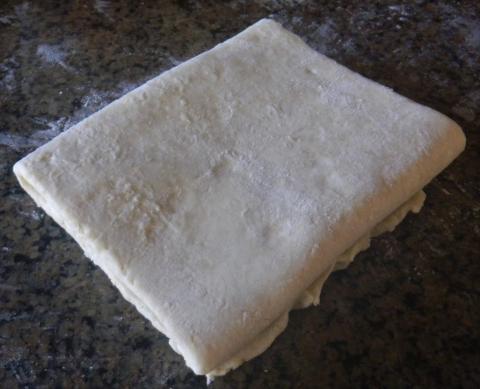 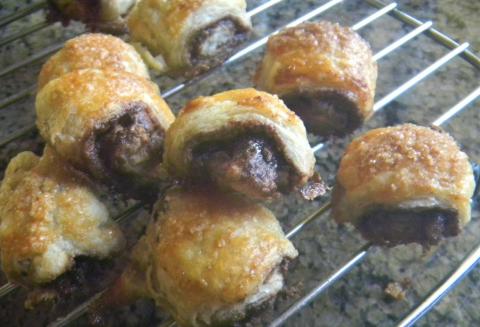 We used the Chacon for Christmas Eve Prime. Smoked Beef Brisket made just the way Aaron Franklin describes in his book with the following exceptions.  We used my new vertical pellet smoker using a competition blend if cherry, apple and hickory instead of post oak,  We all agreed that it was the best brisket we have ever had so hats off to Aarron Franklin of Austin Texas! 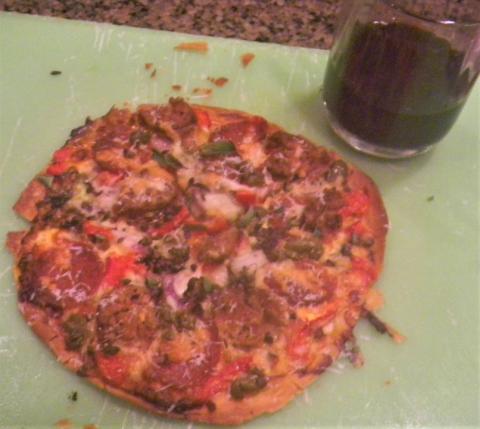 Extra thin tortilla pizza with a nice Chianti and my daughter's Christmas Eve salad that made Lucy proud. 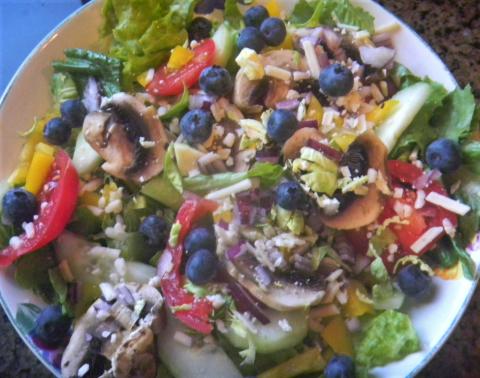 The SD bread was the perfect white bread for such grand smoked meat.  I love that new smoker it has made everything; ribs, turkey breast, chicken thighs, sausage and pork butt perfectly every time.  Only available exclusively at Lowe's - Pit Boss Pro Series 4, vertical pellet smoker - highly recommended and only $379 - half the price of a Traeger, horizontal barrel . 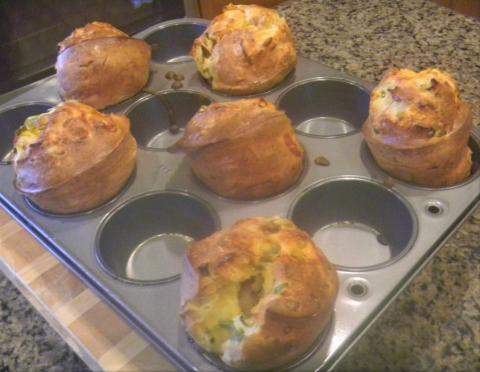 Son In Law's Christmas Breakfast SD Cheese and Scallion Popovers - Yummy with home made Lox and Nova Lox ! The Arizona Sunsets are still the same but this was a Christmas Eve Sunrise. 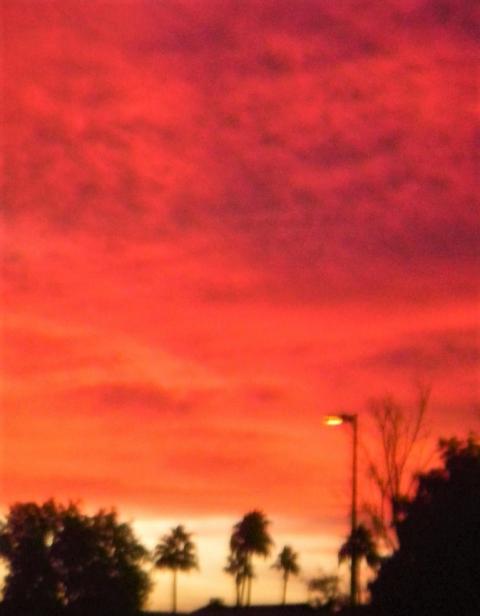 I have not posting much lately and great to see that you are still baking and that  the four-legged friends are all well too...

Lucy is doing well since we switched her diet to no protein renal failure guard she hasn't had one sick day at all!  Mabel is the daughter's and SIL's doggie and she is apprenticing with her master who I taught to make SD bread nearly as well as I do.  His latest batch was just killer.

Best to you and yours in the new year Kat!

A happy and healthy New Year to you and all of yours dab!

May your bread be proud and tall and your wee beasties happy as can be!

So glad you're back! Mabel is adorable for sure but Lucy looks gorgeous in her shiny coat as well. If only I could do so well in her age...

Although both breads contain less whole grains than I'd prefer, they still have to taste 100x superior to supermarket bread. I can certainly see the design of the Chacon so wouldn't say it's a miss :) Typically I choose crumby shortbread crust over flaky puff pastry but that chocolate cinnamon Rugelach looks good enough to eat! We had Yorkshire pudding to serve with beef chili recently. It was made in my 8 inch cast iron pan with home rendered lard. I put some leftover beer from making the chili in the batter so it fizzled loudly when it hit the pan. No over-spill fortunately. I'm sharing the photos shortly in my next post.

I'm so jealous you're getting a new smoker! It certainly makes killer brisket. I can only rely on liquid smoke for sausages...

Hopefully your son-in-law would master homemade SD soon. You've set him on the right track. Not everyone is lucky enough to have a good teacher :) Happy New Year to you and your family! Looking forward to reading more posts from you!

I love the new smoker.  Right now it is making a Turkey Breast and it is at 150 FZ with only 10 F to go till I can take it out to rest while I make the gravy from the drippings.  Everything it makes is killer!  Thew rids two nights ago were to die for!  After 50 years of making ribs Lucy didn't think that they could be better but I proved her wrong - again:-)  SIL was here for the Holidays and I spent a whole day teaching him all about SD bread making.  He was trying to use the NMNF starter without building a levain and letting double.  Daughter said all of his breads were flat - no wonder.  Now that is straightened out and his last bread was tall, proud and sour with lots of nice holes for 40% whole grain.  I like apple pie with short pie crust bottom and puff pastry top!

I saw your latest post and will get to it tomorrow!  The Turkey Breast is calling me!  So glad to be back in touch.  Hope all is well In HK too!

The very best to you, your Mom and Dad and may the new year be the best ever with plenty of bread and fine cooking for all to see

Just checked TFL a few days ago and found out you're not posting much also. For me, I thought I'll be able to bake more but I still need to manage my time more efficiently. To more baking next year! Happy New Year!

Give a warm head and belly rub to Lucy and Mabel too for me!

cutting out carbs to get the diabetes in check doesn't help for bread baking either!  At least I can bake now and again for my wife's sandwiches.  She want's the same whitish, low whole grain (10-20%) SD all the time and she always gets what she wants!

I'm with you Job - here is to more bread baking in the New Year!  Take care Nephew and keep your eye open for that special lady!

Happy New Year!   it has been a very long time since I logged in on "The Fresh Loaf" and the first question to answer was "How is Lucy?"

I am very pleased to see that your assistant is still helping out in the kitchen.  Mabel, the understudy, will become capable baker's assistant in time with Lucy's guidance.

dabrownman
January 5, 2020 - 9:22am
Lucy and i are completely convinced that you are too kind!

Lucy has been her old self of late and is approaching another birthday in May looking forward to warmer weather nit in the 60's!  She kind of stiffens up when it is cold just like me!  She did jump from the back of the love seat to the kitchen counter to pinch 6 pecan, orange scones and haul them out to the back yard for a snack!  We came home after she had eaten 3 of them!

We love Mabel!  She will be 1 at the end if this month.  She likes our backyard in Warm Arizona way better than being couped up in rainy, cold Seattle in that tiny, 6th floor condo.  She was a free spirit while here!

Here is the Holiday Picture of the two of them, sitting still and being nice! 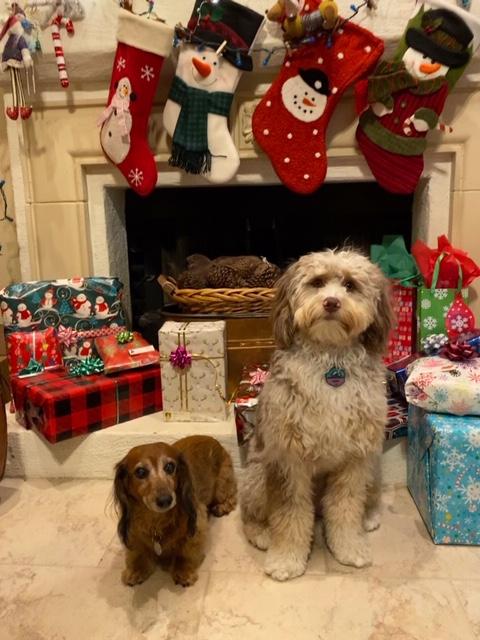 dabrownman:  Your new dog is so cute!  Lucy is fab as always.  I have not been on the site for so long! Hope you are well and weathering the virus. My husband and I are grounded with three trips cancelled or on hold, so I am worried about my far away starter in the UK and my hometown of Milwaukee.  They are not being fed as we are in California.  Just doing some boring bakes during the shutdown (classic sourdough, baguettes and terrible gluten free stuff), but keeping busy. I should get going and do some posts.  Take care and all the best,  Phyllis