I was lucky enough for a friend (FoodieVic) who recently visited Altamura to kindly bring me back durum wheat flour to make traditional Altamura bread of my own with. Tasting breads made with these flours really showed me the value in such an age old custom. It’s amazing they are still alive and well today and still in their original form. It’s fascinating to see her images of the bakeries that have changed only minimally throughout the centuries they’ve been in business. Check out her blog post here: http://www.thefreshloaf.com/node/61820/visiting-altamuras-two-famous-bakeries-oct-2019

I was given 2 flours pictured below (Picture courtesy of FoodieVic). Forno Antico Santa Chiara was more coarse and was the first one I used.

Reading up on Altamura bread it needed a starter. Since I don’t have one on the go right now I started a biga that aged about 7 hours before using. I used unbleached flour for this not wanting to take away from the durum flour because it was exactly enough for one loaf. This is not entirely authentic but turned out well all the same. Here’s the link: https://leitesculinaria.com/79243/recipes-biga.html it worked well for a quick pre-ferment.

Dough: for the bread, I used this recipe: https://www.pastamadre.de/single-post/2017/02/15/Pane-di-Altamura-aka-my-favourite-bread

I used a bread maker to mix, knead and rise the dough for 2 hours. I am not accustomed to using a bread machine but was pleasantly surprised with the result. By letting it rise contained in the bread pan, it rose well. I was thrilled to see it came out a very similar texture to the video. I folded it twice and placed it on parchment and slid it onto a preheated pizza stone.

I used this technique for shaping: https://youtu.be/k08hJQNQ5pE

As you can see it opened up a lot at the seam and was quite porous considering the flour was so coarse. The texture was slightly gummy and dense. Very different from regular wheat flour bread. The recipe was quite low salt, so the flavour was mild but toasted nicely which brought out more flavour. It was still moist on the 4th day. 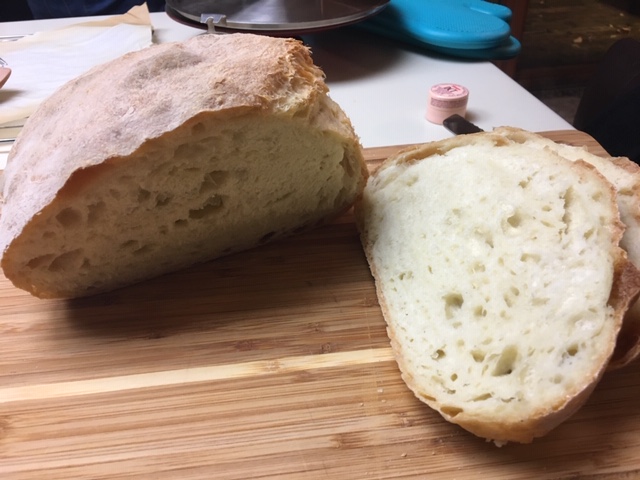 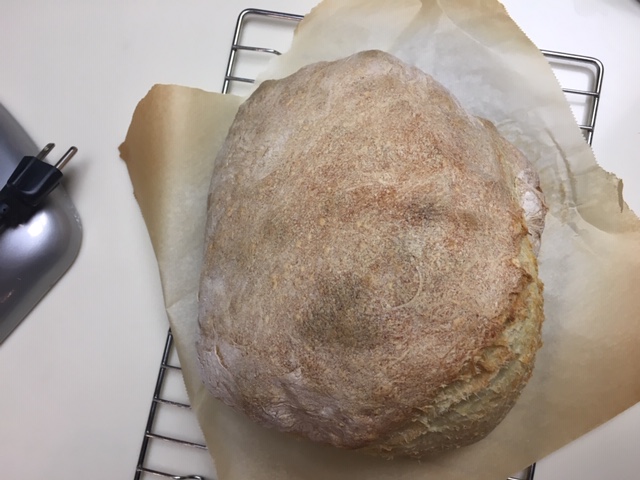 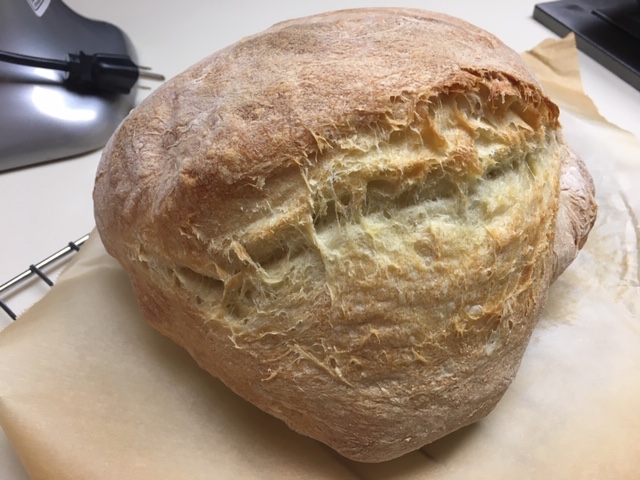 I used the same biga recipe, substituting with whole wheat durum flour and letting it ferment for 43 hours, stirring every few hours. I used the same bread recipe as above and let them both rise on the stove under a plastic sheet in stainless steel bowls. This was not as warm, humid or temperature controlled as the bread machine. For this type of bread a warm summer day or a good proofer set up would be ideal.

I used the same shaping technique as above and baked them on a pampered chef stoneware pan.

The whole wheat durum was very dense and firm with a darker brownish grey colour. The recipe was low salt so the overall flavour was mild. The Italian durum turned out far better, with a more open crumb structure, softer texture and cleaner flavour. 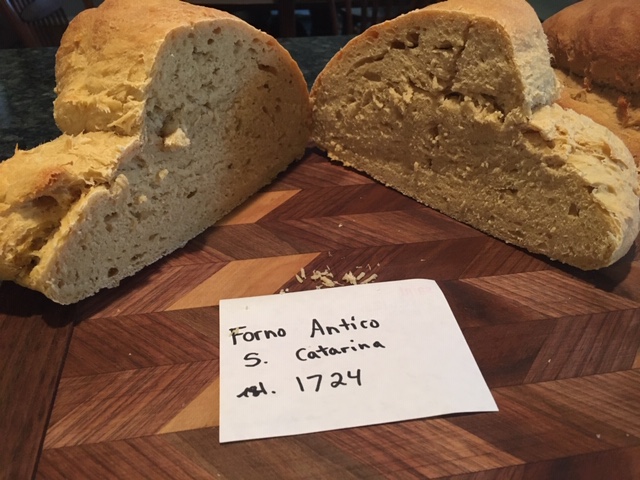 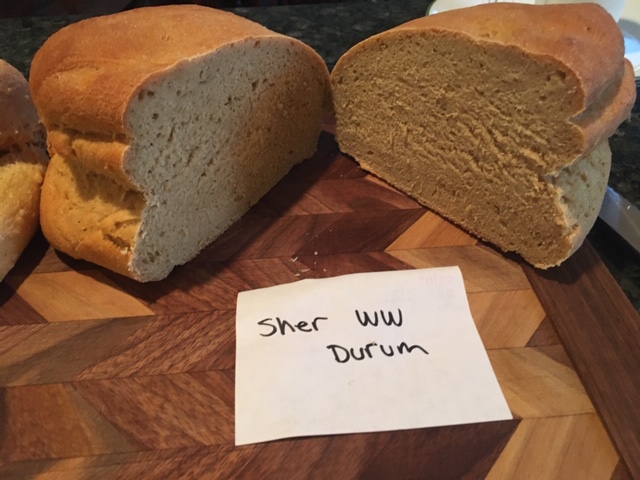 It was fun to bake with these flours to see how differently they all turned out. I’ve never been to Italy but hope to make it there one day to try these breads in person!

If your locale has Indian grocery stores, they will likely carry 10 pound or 20 pound bags of durum flour.

I have seen "Temple" brand durum flour.  Temple brand is labeled "atta" but it is not whole grain.  It is a true flour, not semolina. It has vitamins added, indicating it is a refined product, not whole grain.

There is also a "Sher" brand durum flour from the milling company called "Brar Mills".  This is also a true flour, not a gritty semolina.  They offer two styles of durum:  "Desi Style" and "Fiber Wala".  The latter has more bran.  You can get 20 pounds for around US $14.

I have seen all three of these kinds of durum flour in Indianapolis.

Thanks Idaveindy! I used the sher brand, durum atta. However, I would have rather used the true enriched flour to avoid the bran to help with the structure. I couldn't find just a durum flour that wasn't blended with other flours or without the bran. Next time I'll search that out at an Indian grocery store, we have several around.

Sounds like the "Desi Style" from Sher is the one you want.  If I remember correctly "Desi Style" durum is not a blend.

(I did not see the "Sher" written on the note in your last pic until after I posted the previous comment.)

In case you haven't seen both styles of their durum flour, here's their web site: http://www.sherbrarmills.com

I've emailed the miller, Brar Mills in Canada, but they did not tell me the extraction rates, or ash percentages.  Just that "Desi Style" is a "normal" extraction, which I suppose to mean the same extraction rate as white flour (all purpose or bread) , and they said that "Sher Fiber Wala" durum has more bran than "Sher Desi Style" durum.  But, they also implied, or left open to interpretation, that Fiber Wala is not 100% whole grain.   It is a word game, "whole wheat", apparently, does not mean "100% whole grain".  "Whole wheat" to them  _apparently_ means  "at least some portion of all the various parts of the grain", meaning SOME of the bran and SOME of the germ.

Therefore, my conclusion, for now, is that "Fiber Wala" durum is "high extraction", but is not "100%" whole grain.

I have so far used 30 pounds of Fiber Wala in baking.  It does take more yeast or levain, and/or longer ferment/proof, and/or some vital wheat gluten to get a nice airy loaf.

There is also flour marketed as "chapati flour" but there is no standard as to what that means, it's just a marketing term meaning "intended for" chapatis. So you have to read the ingredients, and trust the miller/producer.  It is usually or mainly durum, but not always.

Just remembered... There is one more kind of store: African grocery stores.  I have seen "regular" American durum flour in at least one African grocery store here in Indianapolis.  It was enriched, so I would assume it is a low bran type of flour, along the lines of all-purpose or bread flour.  I forget the brand, but it was a common American brand, perhaps Gold Medal.  It was also a large bag, at least 20 pounds, maybe even 50.  Sorry that my memory is not more exact.  But I remember being surprised by seeing durum flour, and I did not buy it because it was enriched, meaning low bran.