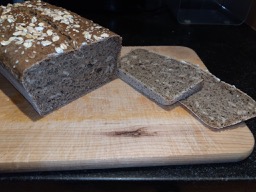 I'm not gluten intolerant as far as a test goes, but we have decided to try to reduce our gluten intake from other reading.  Grain Brain is the book, FYI.  I'm not writing to discuss the science ... or not.

I figured oats as a base with the usual sort of "M4M" blend of other flours.
But I also wanted to see if I could get any ferment into an oat starter.
I stumbled on this.
https://artisaniaeth.com/index.php/en/2018/03/09/oat-sourdough-experiment/

Other than that, I followed Geths' methodology.  Now I have a couple jars in various stages of forming the final starter.

Now to find a recipe to jump off from.
I got a bunch of books from the local liberry system.

The how can it be gluten free cookbook

Gluten-free on a shoestring bakes bread

In my mind, flour with eggs is cake.  So I was looking for something without eggs.

The last 2 books were closest to that concept.

More reading and googooing, and I resigned myself to either xanthan or Psyllium.

Simply because that is the way I feed my AP and rye based starters.

I let it go over night.  There was some activity, but not like I see with the AP starter.

The jump off recipe came from Gluten-free artisan bread in five minutes a day.

On page 146, Oatmeal Maple bread.  I started with a 1/2 recipe in case it was a compostable disaster failure.
Below is the altered recipe that I used, not the original.

2c KAF M4M flour
(I wasn't being lazy, but CostCo had it in the aisle.  Figured there was enough positive spin on it and I like their products in general .... it was worth a shot.  It still ain't cheap, but....  It is pretty much like what Hertzberg/François describe in the book).

Put it all in the trusty Concept 7 for a 7 min spin on 3 with the euro hook.

Dropped it in my rise bucket and left it on the counter for a couple hours to do it's thing. Which it did, admirably.
The house is pretty cool, ~66º.

Then into the fridge as the recipe describes.
I let it do it's thing there for about 36 hours.

Tasted pretty good.  Not at all like some of cardboard I've had.  But eggs would cover a lot of sin.  And cheddar, cado and aji pepper sauce.  It's not at all like my multigrain described above, but I didn't expect it would be.
A Hyundai is a Hyundai and a Ferrari is a Ferrari.
One has 4 cylinders and will get you to where you're going.
The other has 8 or 12 cylinders and will get you to where you're going waaaaay faster but with a $100 ticket, a head shake, and that "really?" look from the cop who writes the ticket.
Tmrw, PBJ ....... actually almond butter (TJs raw, no salt, crunchy) and strawbs or naners.  Blueberry season is over, Darn the Luck ! ! !

Forthwith, a couple snaps.
The white discoloration, I assume, is the hand mixed oats.

I think next time, I may try to sub some of that M4M with more teff and or buckwheat.
And perhaps reduce the water by 1/4c.

Awright, time to feed the cat or let him in or out .... if he can make a decision.

If you have Indian/Pakistani stores available, such as Patel Bros., they have great prices on GF flours.

Real corn flour, yellowish, that is NOT corn "masa", meaning it has not been treated with lime.  This is not  "corn starch". And it is not what they call "corn flour" in the UK.

Various bean flours, such as soy, mung bean, and chickpea (aka garbanzo bean).  Though I do not like the taste of bean flours in my bread.  To me, it just "doesn't beling there." But that's just me.

I bought two pounds of Guar Gum, from "Pure Organic" on Amazon. Way too much, as a little goes a long way.  Even though you have to use 2 to 4 times as much Guar Gum as Xanthan Gum, it still works out cheaper because xanthan is so expensive, Also, xanthan gum gives me too much gas, as I don't digest it. Guar gum is better for me in that respect.

I am not gluten intolerant, and not even gluten sensitive.  I just wanted to experiment and see what those non-wheat flours were about.

I do have a Patel Bros nearby and little India on Lex in Manhattan.  Hadn't thought of those.  Thanks,

I assume the KAF M4M has xanthan gum included.

Another GF caveat, I've found that most ready-made GF flour blends are lower on fiber than whole wheat, due to the abundance of fiberless flours in them: white rice, tapioca, potato, corn starch.

I just remembered "fufu flour".  It's at African/Caribbean stores, if not at Patel.  I've seen it in three varieties:

- Plaintain (ie, banana) which is sweeter, and higher in calories.

Allow at least 90 minutes to browse through a Patel Bros store the first time, if you've never been to one.

have you ever tried the fufu or banana?  I've been to Patel.

in Manhattan there is also Kalustyans     A regular stop for me.

Yes, both the cocoyam and the plantain (plaintain?) fufu flour.  I forget if I tried the cassava fufu flour.

I've made both fufu, and used them as additives in bread.

Plantain fufu flour is a sweetener, and makes a small crumb, more cake like, so use it sparingly, maybe 1/4 cup at most in a 2 pound loaf, 3 tbsp in a 1.5 pound loaf.

Cocoyam, I don't remember well, but not having gluten it also causes less rising and smaller crumb.

smaller crumb prolly not for me then.

which would you use to augment the above recipe?
Millet or Amaranth?

The M4M stuff has sorghum already.

For flavor, you'll definitely taste the Amaranth flour.  About 1/8 cup (2 tbsp) in that loaf is enough to get some amaranth flavor.

I get amaranth seeds at Market District (Giant Eagle), and then make flour out of it using a blade-type coffee/spice grinder.  This tends to heat up the grain of anything I grind in it, so I chill the amaranth (or flax seed, or chia seed, or millet) in the fridge the day before I grind it.

I forget if Patel had whole amaranth or amaranth flour, or neither. But sorghum is a common grain of India.

I don't seem to get a fine enough grind using just 1/8 cup of whatever in this blade-type coffee grinder, so I do about 1/3 cup of the raw seed at a time, and keep whatever I don't use right away in a plastic sealed bag in the fridge.  I also have to shake the grinder to get a consistent grind, or else I get big chunks along with the flour.

There are interesting videos on youtub about making your own GF flour mix.

This particlar one goes into an explantion and desired ratio of GF "starch" flour, versus GF "protein" flour, and the proper ratio:     https://www.youtube.com/watch?v=UglmBO3f84w     But, this video does not go into binders, such as xanthan gum, guar gum, psyllium, egg white.

In the Indian grocery stores, "ragi" is the darker millet, and according to Wiki is  "finger millet," https://en.wikipedia.org/wiki/Ragi    I recall liking the taste of ragi better than the other millet, "bajri" or pearl millet, which had a smoother creamier mellower taste.

heh, heh, heh.  I was at Patel when this came in.  I'd already put 1/4c amaranth in the dough yesterday, instead of the extra oats.  Doesn't seem to be very different in taste.
I think I screwed the rise and I did that with steam which is normally how I use to do my wheat breads with starter.

I find it hard to believe that my oat starter developed enough yeast on its' own.  So perhaps the steam rise was too much for GF.

I bought some millet flour at Patel and sorghum ....... as well as some unsweetened mango puree for fruit/yogurt/kefir lunches.  mmmmm.  And gorgeous okra.  Patel definitely had some other oddball flours as well.  Though no tapioca, which I thought odd.
Then crossed the street to the local dosa place.  Won't be dining tonite.

Thanks for the vid links.

Is there any reason that either sorghum or millet flour need to be fridged like Teff and buckwheat?

Whatever kinds of flour I don't plan on using up in two or three weeks after opening, I put in fridge.  I think all flours benefit from the colder temp, as long as the container or plastic bag is sealed.  When I buy American wheat flour that comes in a paper bag, after using some, I clip the paper bag shut, and put the whole thing, paper bag included, into a gallon size sealable bag and store in fridge.

Oily stuff, like flaxseed and chia seed, I freeze after grinding it, grinding maybe a cup of seed at a time, and using a few teaspoons at a time.  I regularly put ground flax seed in my protein shake smoothies.

prolly not a bad idea.

tried to double my recipe, but ended up with a very wet dough.
Also, it way over proofed in a 100ºF oven for 90 mins.

2 things come to mind.
My recipe isn't compensated for the water in the oat starter.
Nor does it account for naturally occurring yeast in the starter.
Not like the starter is bubbling mad like an AP starter, but it must gather some yeast?

It was so wet at this point I added 1/4c each of Teff, buckwheat, amaranth and oats.

I let it counter rise at 66ºF for a couple hours, where it doubled.
Then fridged it over night.  It stayed doubled in the bin.
Put it in a 10x5 the next morning and let it rise (Splatter) in 100ºF oven for 90 mins.

It was still to wet and of course exploded, but I baked it @400ºF for perhaps 70 mins, with a steam pan.
It turned out OK, other then the giant "eye" in the middle.

been playing with the recipe.
I guess the oat starter is gathering some pretty good yeast.
The last couple bakes have had 1t yeast, and I prolly could have used none at all.
I've used leftover "ricotta" whey instead of water when I had it, at perhaps 40º F. 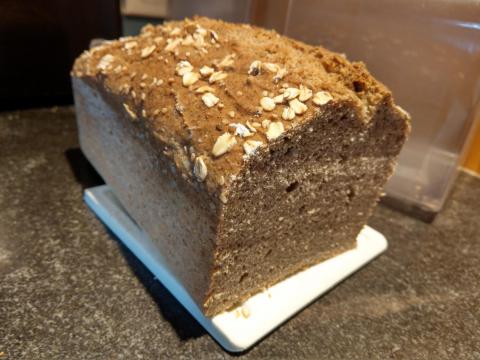 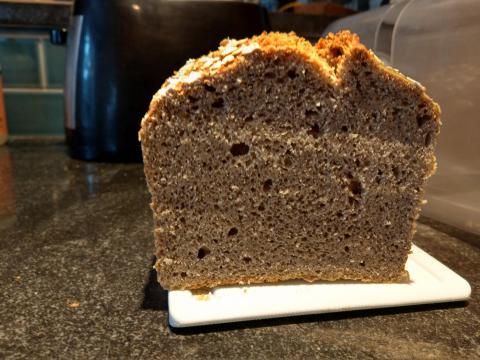 I've been making gluten-free bread from teff flour. I'm looking to try something a little new and have always been interested in oats but there's not that many recipes out there. I can't wait until I have time to study this and give it a go.

hope it works for you too.  reminded me I haven't made it in a while.  next bread.

Community Bake: Naturally Fermented Buckwheat...
Me vs. The Bread, part 3
Read my crumb please
Rofco B40 oven for sale
looking for a good toast recipe
END_OF_DOCUMENT_TOKEN_TO_BE_REPLACED