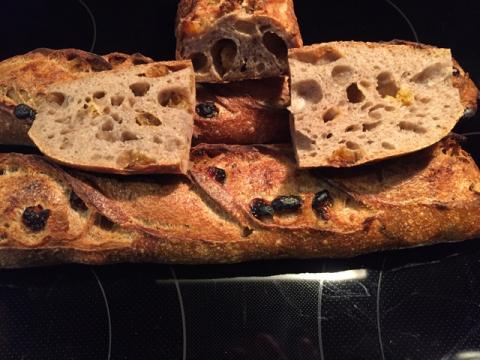 Earlier this week Abe sent to me a link of the just published Cinnamon Raisin Sour Dough on Maurizio Leo’s The Perfect Loaf.  In a move of unusual rapidity for me, I built a BBGA spreadsheet entry for the bread and concurrently fed my levain in preparation.

As is often the case in the alfanso household, I went rebel and turned his posted tapered batards into baguettes.  How unusual for me!  But I wasn’t finished there and made some changes to the whole process.  As follows:

And then made the rookie mistake of retarding the mix at the 2 hr. mark, when I was intending for a 3 hour bulk rise.  Realizing this hours later, I pulled the dough from the refrigerator, gave it a final Letter Fold and let it rise for 2 hours on the counter figuring the warming up of the dough after two hours would compensate sufficiently.  And I suppose that in the end I was right.  Or lucky.

Then back to retard for a few hours more before divide and shape, couche and then return to retard once more for several more hours.  Not as much grigne as I would have liked to have seen, but based on the photos posted by Maurizio, I think that I did quite okay here.  The crumb also looks to be quite nicely opened.

Certainly a tasty bread, almost dessert-like, and sure to find it’s way into my selected Wheel of Fortune down the road.  The crust is not as crisp as I would have preferred but certainly has more snap to it than a soft crust bread, say, a potato bread.

And just as a reminder to those who haven’t yet ventured beyond precisely following the trail laid out by the original poster of a formula and gone rogue - It is okay and even recommended to do so.  Once you do it, it is no longer someone else’s bread it is yours!  And you will learn something along the way that you may not have known before.  I do.  All the time.  Try it, you’ll like it! 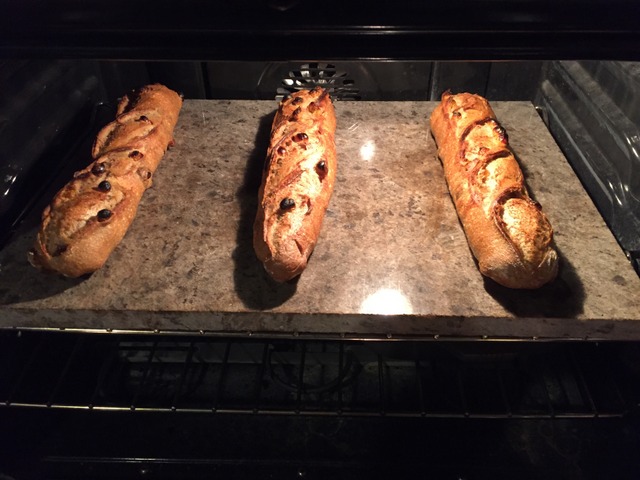 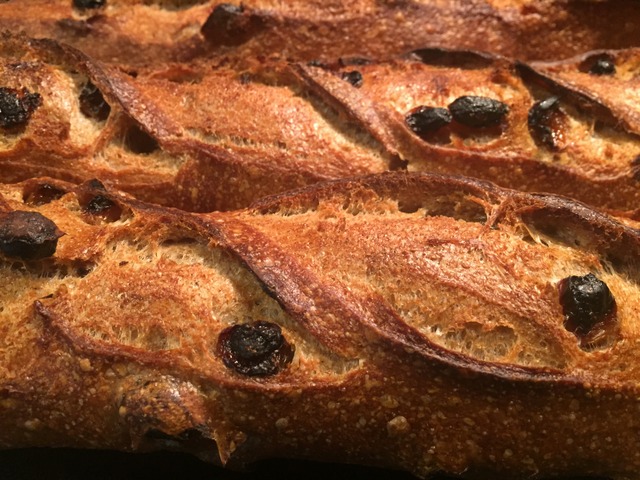 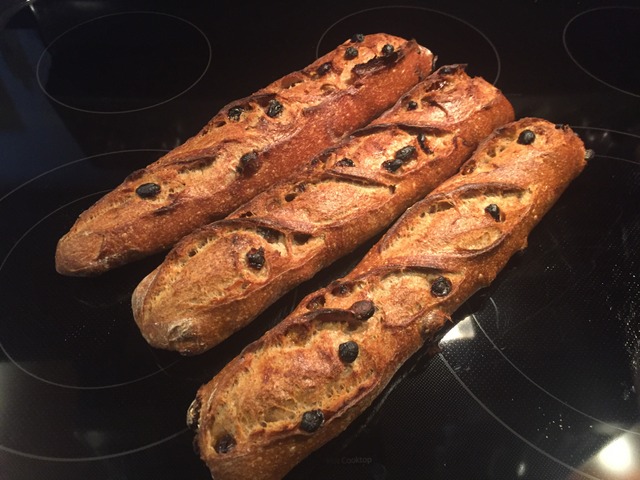 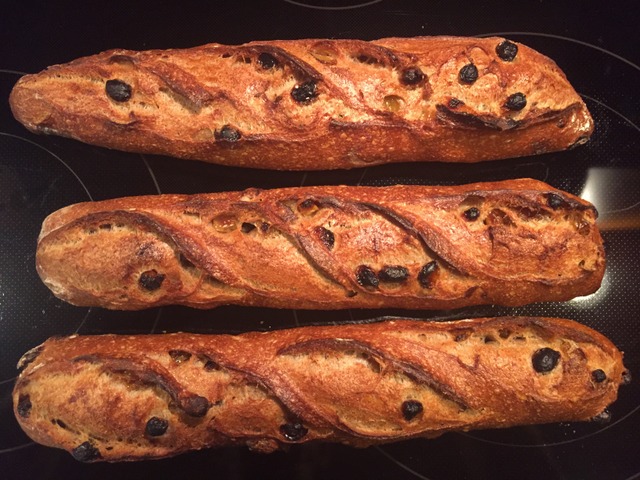 I just love it when you feed my addiction to your pictures! Nice save on the bulk proof!

I don't bake many new things these days, and my general M.O. is to not repeat unless something noteworthy is done to an existing formula, hence fewer and farther between posts.  But I certainly do enjoy that what I do post is appreciated by others, and not just by myself.

I’m off carbs for the next week or so, and you ain’t making it easy.

unbearable.  Yeah, these came out quite nicely and quite tasty, with a definite cinnamon taste rather than just a hint of the spice.  In the past, I've shied away from anything other than a cinnamon swirl bread due to its reputation for inhibiting fermentation.  So this is a true delight ih a nice and quite open crumb.  And yes, with toast being one of my favorite foods on earth (and beyond), it is quite delicious.  And would-be a fine addition to a cheese and fruit board too.

Nice one Alan. Did it much justice but didn't expect anything else. Lovely write-up with a nice save at the bulk ferment stage.

I'm interested as to which cinnamon you used. There are two kinds. Cassia and True Cinnamon.

Would you recommend this recipe?

As I buy supermarket just-about-everything, I'd guess that it is the more common and inexpensive of the two, the Cassia.

Definitely try this recipe.  Tomorrow I'm making a combo of a larger batard for my wife's taiko group and a loaf pan for my Mother-in law.   Let's see if I have the sophomore jinx or not.

Ooopppsss!  I'm not really yelling at you.....just had the caps lock down and am too lazy to redo the typing.  I've been putting the levain in with the dough flour and water, putting the salt on top, skipping the autolyse and just calling it....... a rest period - something Lucy is very good at and I am really starting to take too ....when I'm not sleeping.  The things you can do to rote when you are older is a blessing to take advantage of.

These raisin breads look way better than the loaf ones and are way more open too and they have to have that hint of SD too!  I wouldn't mind serving this as a desert warm with some butter and warm Bourbon Snockered Raisins on top with a bit of whipped cream.  It certainly would be better for you, have less calories and taste better than eating a whole mixed berry pie with whipped cream all by yourself in one go - which is sort of the gold standard around here.  Toast with butter would be pretty killer for the feint of heart too.  Not making this recipe into baggies should be a crime by the looks of these beauties.

I think that this is a great bread for a cheese and fruit board, as well as toasted with cream cheese or butter.  I can already attest to the latter of these.  Maybe a nice brandy or port to go along with it.  But definitely a keeper.

PS I also remember Mabel Mabel set the table, so it must have been from one of those corny songs our mothers sang to us.   Same era that they too grew up in.

That your Mother taught you.

Do it as fast as you are able,

If the jumper "misses" on "pepper", then the turners begin turning fast or doing "hot peppers".

I was going to say Serpentine, but that makes even less sense.

As I mentioned way way back, after the first 10,000 baguettes it gets easier.  Well, truth is I'm much farther away than not.  But I still like to quote myself!

"And just as a reminder to those who haven’t yet ventured beyond precisely following the trail laid out by the original poster of a formula and gone rogue - It is okay and even recommended to do so.  Once you do it, it is no longer someone else’s bread it is yours!  And you will learn something along the way that you may not have known before."

In my mind, automatically changed to:

"And just as a reminder to those who haven’t yet precisely follow the trail laid out by the original poster of a formula - It is okay and even recommended to do so.  Even if you do so, it is still your bread not someone else’s!  And you will learn something along the way that you may not have known before."

My apologies. For someone like me who has never ever (seriously) followed a formula precisely, you should be giving the opposite advise. Please, being encouraged by a baguette adept to mess up other bread masters' formula isn't doing me any good...

Sweet bread doesn't usually appeal to me. I have to admit the smell of cinnamon bread is insanely addictive though. What more can I say? Great baguettes. Always.

I have the notion that there are a fair amount of TFL bakers on here that when they say they baked (for example) the "Hamelman Vermont SD", do exactly that and stick to the method and percentages as closely as possible, and likely time after time.  And there is nothing wrong with that, consistency and sticking to a proven winning formula has its many rewards.  But to me, the fun is in taking the base formula or final shaping and make something else of it.

Elsewhere I've mentioned more than once that when I find something on websites, such a this bake and which I get a desire to try, I'll do a search to see if I can find the bread having been posted anywhere as a baguette shape.  If not, then I get a little bit of an uplift knowing that my next bake is going to be different that whatever anyone else had previously posted.

There no right or wrong (well, maybe some wrong here and there ;-) ) but just my gentle suggestion to those who haven't designed or modified something yet.  I'll also call myself a copycat at times.  I know that some of you, you for instance along with Ian and Danni and several others, enjoy opening up the pantry door, and whatever falls out seems to make it into your next bake.

Yes it is a sweet bread but it contains no sugar, honey, Stevia, etc.  All of the sweetness comes from the bursts of flavor that the raisins provide.  And the cinnamon taste and smell really is delightful.

Thanks for sharing your thoughts Elsie, alan

I don't often comment on the bread browser---too many nice loaves to remark on them all---however, these are so nice that it cannot be helped. The shaping and oven spring look spectacular. Great work!

thanks for taking the time to add your thoughts.  If there is one area in the shaping that I never quite get down all that great it often times is in tapering the ends consistently.  Even more of a challenge when dealing with a wet dough and/or fruit and nuts based dough.  These qualify on both counts.  Generally, I've had a pretty fair amount of success in the scoring department, so no complaints there.  Just the occasional whinging about this or that.