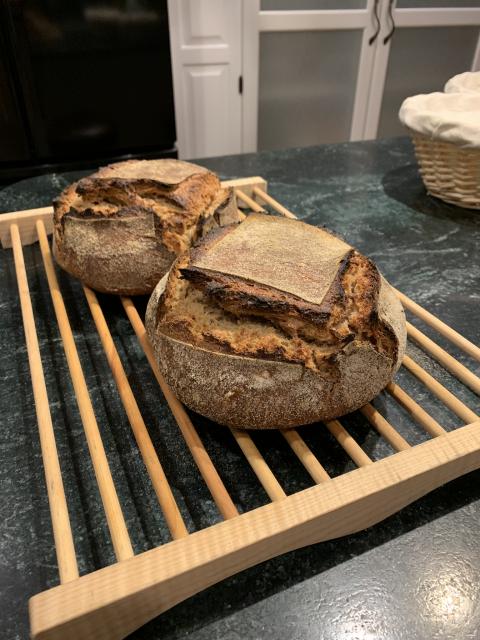 Mr. Forkish designed this formula as a hybrid, using a levain and baker's yeast for leavening.  I elected to use only the levain because it was one of two things that I wanted to test with this bake.

Some context is probably in order.

The recent community bake of Maurizio’s oat porridge bread had left me questioning my flour, my starter, and my own capabilities.  The first attempt, which was chronicled in the CB thread, was an unmitigated disaster and a lot of that was due to one key decision that I made.  The second attempt (and no, you did not see an account of that) stayed closer to Maurizio's guidelines.  The results, while not disastrous, weren’t satisfactory, either.  Let's just say that I have a good supply of altus on hand now.

Coming out of that debacle, I wanted to know whether my starter and my flour are performing as they should.  My curiosity about the flour stems from recently starting to mill whole wheat flour from a 5-gallon bucket of nominally hard red wheat that was gifted to me a few months ago.  This bread would give each component, starter and flour, the chance to display their functions without being swamped by other influences.

Since I wanted to observe the dough as it fermented, I made the levain on Friday evening before retiring.  On Saturday morning, it had expanded to at least twice its original volume and was full of bubbles.  The formula calls for 360g even though Forkish tells you to make 1000g. I made 400g and called it good.

I stayed pretty close to Forkish' process for the autolyse and the dough, although I did employ some slap and folds to ensure that the ingredients were thoroughly combined in the final dough.  One change that I did make was to withhold 60g of water from the autolyse, reasoning that some would be added to help disperse the salt and more would be absorbed during the stretch and folds when woorking with wet hands and a wet counter.  It seemed to have been a good choice.

Bulk ferment ran from about 9:15 am to 3:30 pm.  Kitchen temperatures were 68F to 70F.  After shaping, the final fermentation, also at room temperature, ran to about 7:30 pm. The bread was baked on a stone with steam at 475F for 50 minutes.  At this point, their internal temperature registered as 210F so they were removed from the oven and cooled on a rack. 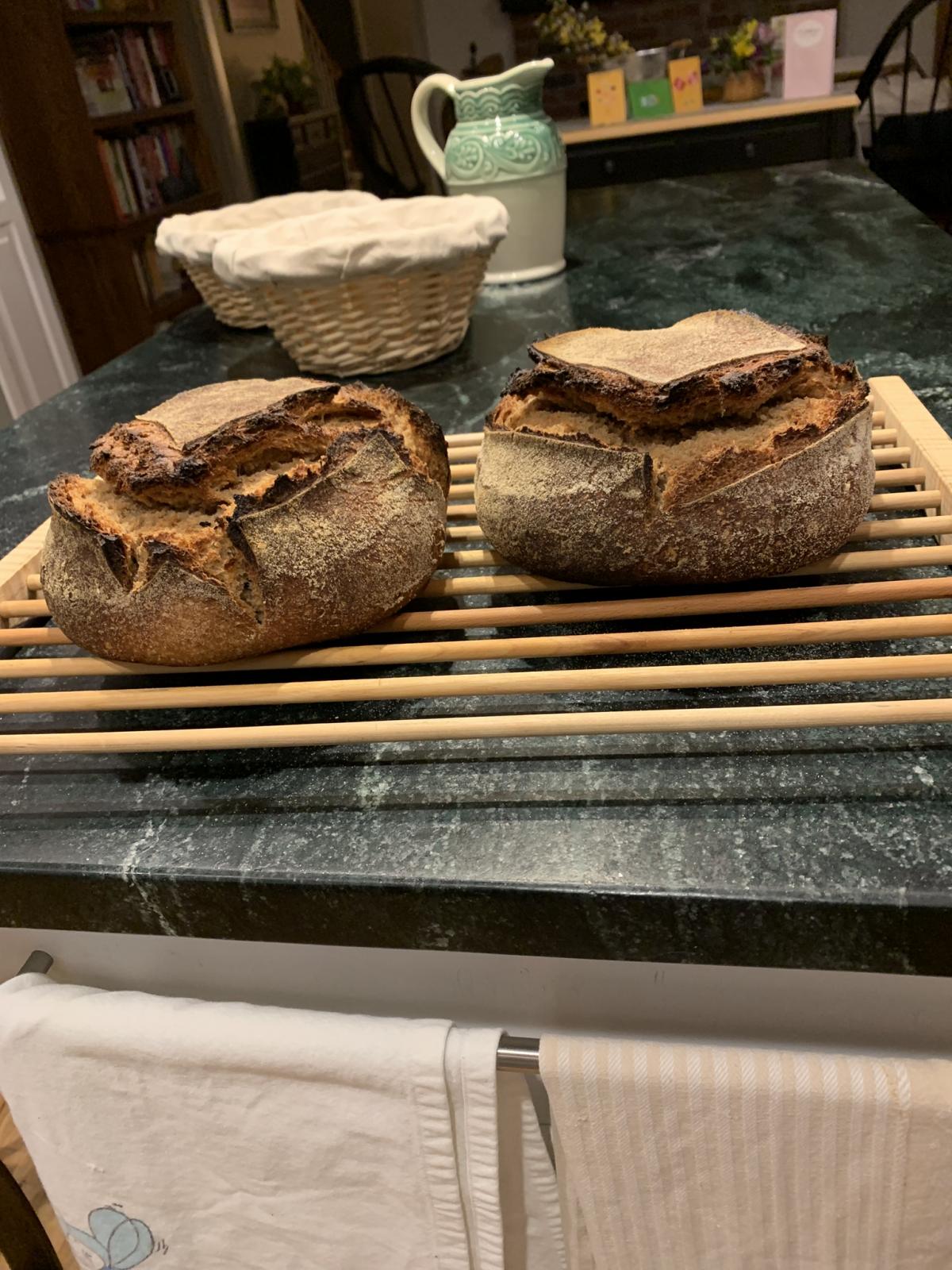 Based on the oven spring, I could have extended the final fermentation.  Still, I’m pretty happy with the results.  When I cut into the loaf, the crumb looks like this: 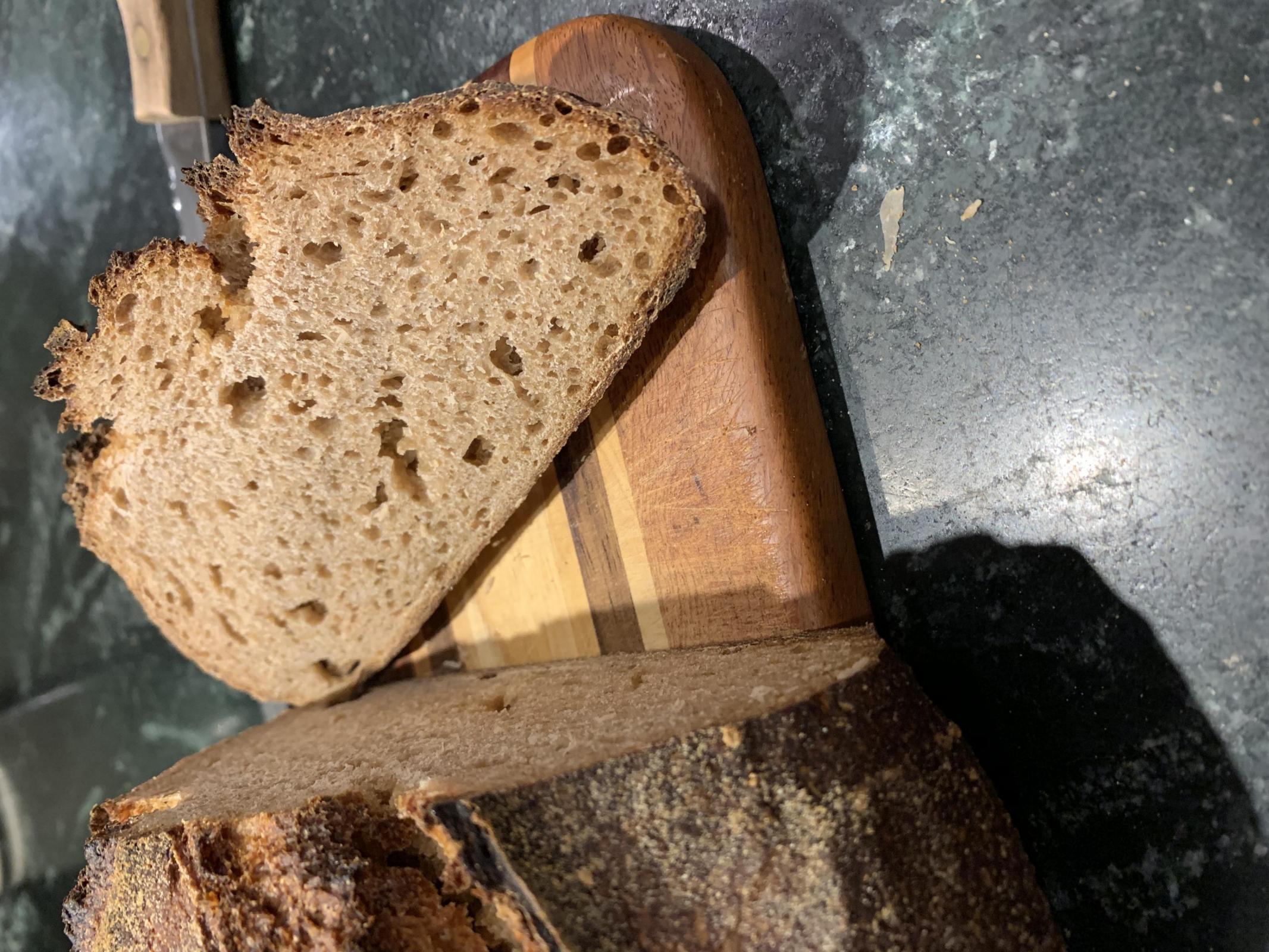 Could it be more open? Sure, but this will be used primarily for sandwiches so it fits that need very nicely. The crumb is moist and chewy.  The fragrance is tangy and the flavor is about as sour as I care to have.  That seems to be a characteristic of breads with a high proportion of whole wheat flour.

The upshot of all of this, aside from having usable bread, is that the starter has proven that it can still leaven effectively. And the wheat does, indeed, appear to be a hard wheat instead of a softer variety that I had begun to suspect.  I can go on with my baking knowing that those two elements aren’t causing problems for me.

Lovely specimens, Paul.  I can almost smell and taste the slightest hints of sour!  Your contribution prompts me to mention that, after laying off Forkish for more than a year, I am slowly re-acquainting myself with FWSY and getting excellent results.   Taking a break from something can be beneficial, and I wonder if his rather formulaic approach sometimes makes the outcomes too nuanced to be appreciated? J

Sour notes dominate the flavor now.  Flavors that grow more intense over the first 2-3 days seem to be a sourdough thing, too.

Thank you for your comments.  I don't bake from FWSY often.  Some of Forkish's approach in that book tend to annoy me, such as his insistence on building massive quantities of levain that are then discarded.  He also tends to operate at higher hydration levels than I want/need for most of my breads.  Selling more water in each loaf may be a good business model for him (re: the old baker's joke that baking is the art of making water stand up) but it doesn't automatically translate to better breads.

You may be the first person to accuse Forkish breads of being too nuanced.  ;-)  But yes, I agree that the breads in that book follow a very limited template.

I can taste the butter / cheese or better still muhammarh on a slice.  Yum yum. Looks terrific.

Thanks for the long explanation and detailing your thinking.  Very helpful

It played very nicely with my turkey and swiss sandwich today, for instance.

Thank you for your comments.  I'm glad you found the write-up to be helpful.

I had a very sucessful bake for the recent CB but my repeat loaf 2 weeks later for a fund raising breakfast was no where near as good.  I was also questioning my starter viability. I am not baking much atm so was very disappointed.  I have not figued out what happened that day, maybe it was just a little cool and I should have proofed longer.  The bread is heavy, not excessively dense but so moist it is bordering on doughy. I baked to 208-210°f internal temperature.  your thoughts?

your loaves are very nice and I agree with your comments re hydration in Forkish formula. I haven’t made one of his for a long time.

My impression is that if fermentation, bulk and final, aren’t just so, the CB bread comes out wet and sticky. And that's even when the internal temperature would say that it is fully cooked.  It’s essentially an oatmeal ciabatta, which means it has even less gluten structure to hold the crumb open.  If I remember correctly, the hydration was 100%.

Sorry yours didn’t turn out well.

great post for a 75% whole wheat bread.  It really came out exceptionally well and if it got more sour after a day even better!

One that you would probably enjoy, since it is right on the edge of being too sour for my liking.  It isn’t to the puckering stage, for which I am grateful.

Glad to hear you enjoyed your time in Seattle with daughter and son-in-law.