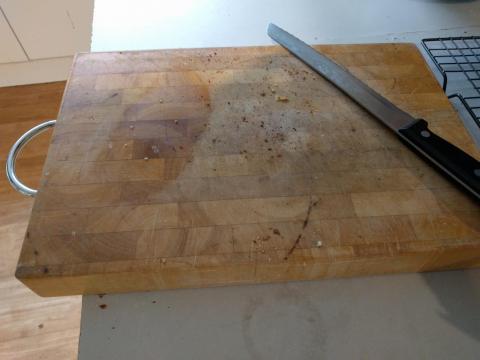 I decided a few days ago to bake dmsnyder's SF Sourdough loaf take 4, which was marked "the best version" on his list of recipes.

I followed his recipe exactly.  Except that I had to make a few changes.  And I made a few more changes because they just made sense to me.

Firstly, I mixed by hand.  I don't have a machine.

Second, instead of whole wheat flour, I substituted whole rye flour.  This, I think, at least doubled the sourness factor.

I've heard a lot of good things about pineapple juice when used for starting a starter. So instead of water I substituted pineapple juice for all of the water in the levain.  If it's good for starter, why not levain? Levain is a type of starter after all. By this point I was really getting excited about all that sweetness!

He retards in the refrigerator overnight.  I retarded in a drinks fridge for however long it took me to visit the downtown bookstore.

I've posted a picture of the crumb at the top.  I'm really pleased with the large open spaces between the gluten.  I'm considering using a basting brush to open up those holes a bit larger.

The loaves did turn out surprisingly small, especially considering as I baked the 2kg version of the dough.  Although small, they were incredibly fluffy and the crust was crispy and delicious.  Come to think of it, the loaves didn't start out small, but they got smaller and smaller starting about 20 minutes after I took them out of the oven.

.. a lot easier than living with my ex-girlfriend.  As I recall, she was a B and a C.

My favorite line: "I followed his recipe exactly.  Except that I had to make a few changes."

Took a minute but congratulations - you pulled an early April Fools on David....,

I only see a few crumbs on a cutting board...??

As far as the pineapple substituted for water...brave is all I can say.

I was taught years ago (1970's era) in food service that pineapple had similar enzymes as was used in commercial meat tenderizers and acted strangely in the presence of some starches.  We used modified starches for any bases or filling we made with pineapple.  I doubt schools do anything more than opening a can of filling for their pastries anymore...IF they even mix and bake anymore.

Glad it turned out considering you didn't actually follow his recipe... IF substituting pineapple juice for ALL the water...is anywhere close.  LOL