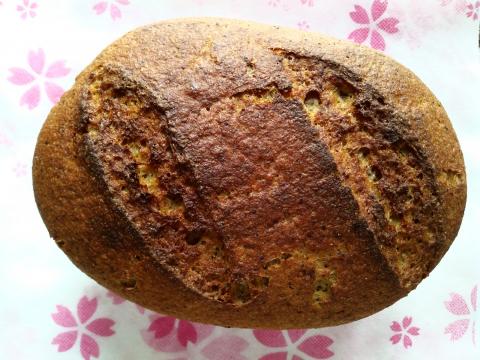 For every bread with sprouted kamut or durum I baked, I find its sweetness a tad overly dominating. This time, I paired Earl Grey with these sweet sprouted grains in the hope that the resulting flavour would be more balanced. 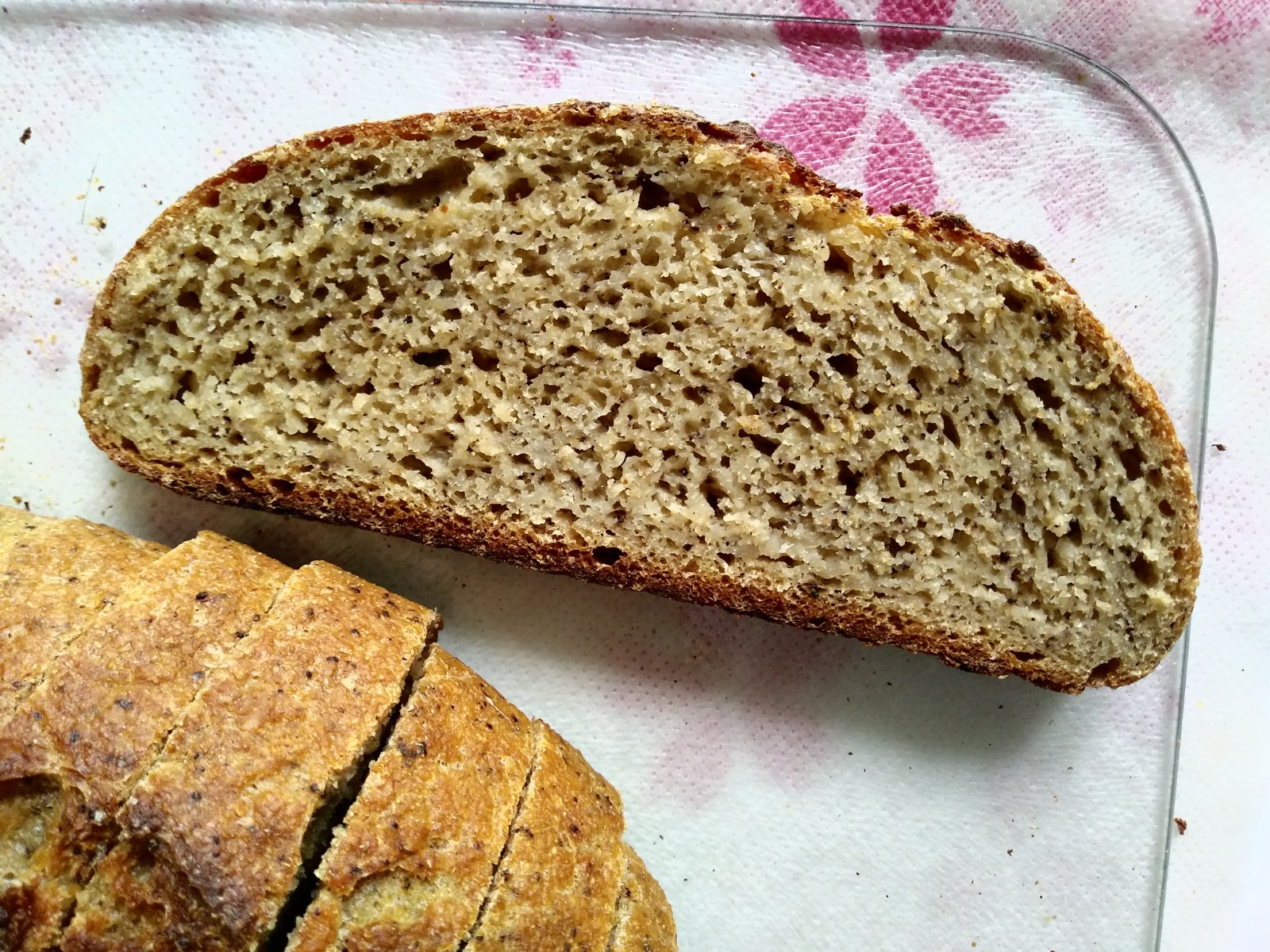 Sift out the bran from dough flour, reserve 25 g for the leaven. Soak the rest, if any, in equal amount of whey taken from dough ingredients.

Combine all leaven ingredients and let sit until doubled, around 2.5 hours (27°C).

Roughly combine all dough ingredients and ferment for 3 hours 20 minutes. Construct 1 set of stretch and fold at the 15 minutes mark.

Preheat the oven at 250°C/482°F. Score and spritz the dough then bake straight from the fridge at 250°C/482°F with steam for 15 minutes then without steam for 25 minutes more or until the internal temperature reaches a minimum of 208°F. Let cool for at least 2 hours before slicing. 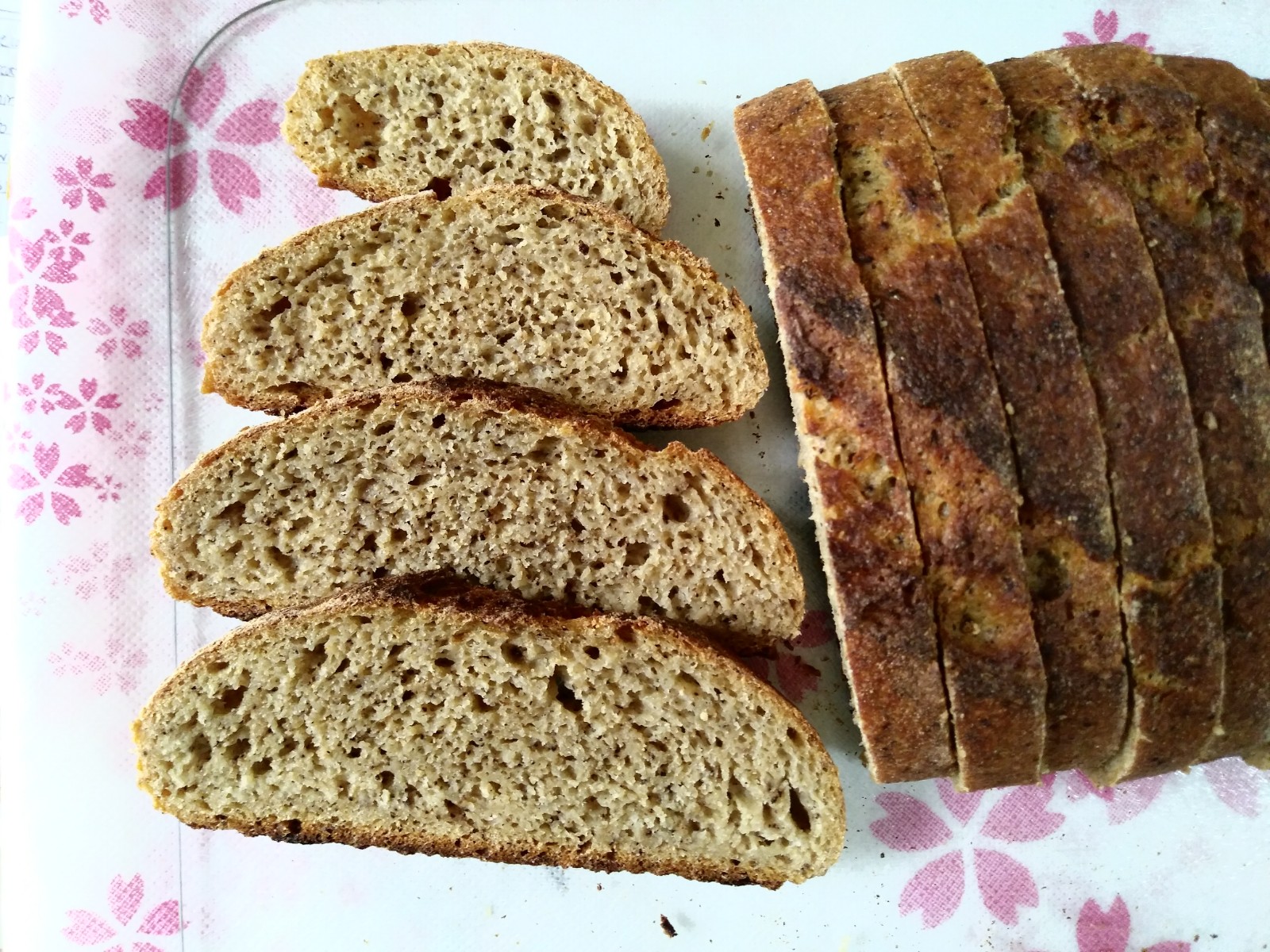 The dough was rather sticky, which I associate with the use of Indian atta and sprouted grains. For some reason, this bread felt very heavy out of the oven. The crumb was slightly sticky, probably because I cut into it too soon again…The crumb isn’t open but it’s acceptable to me for a low gluten loaf. 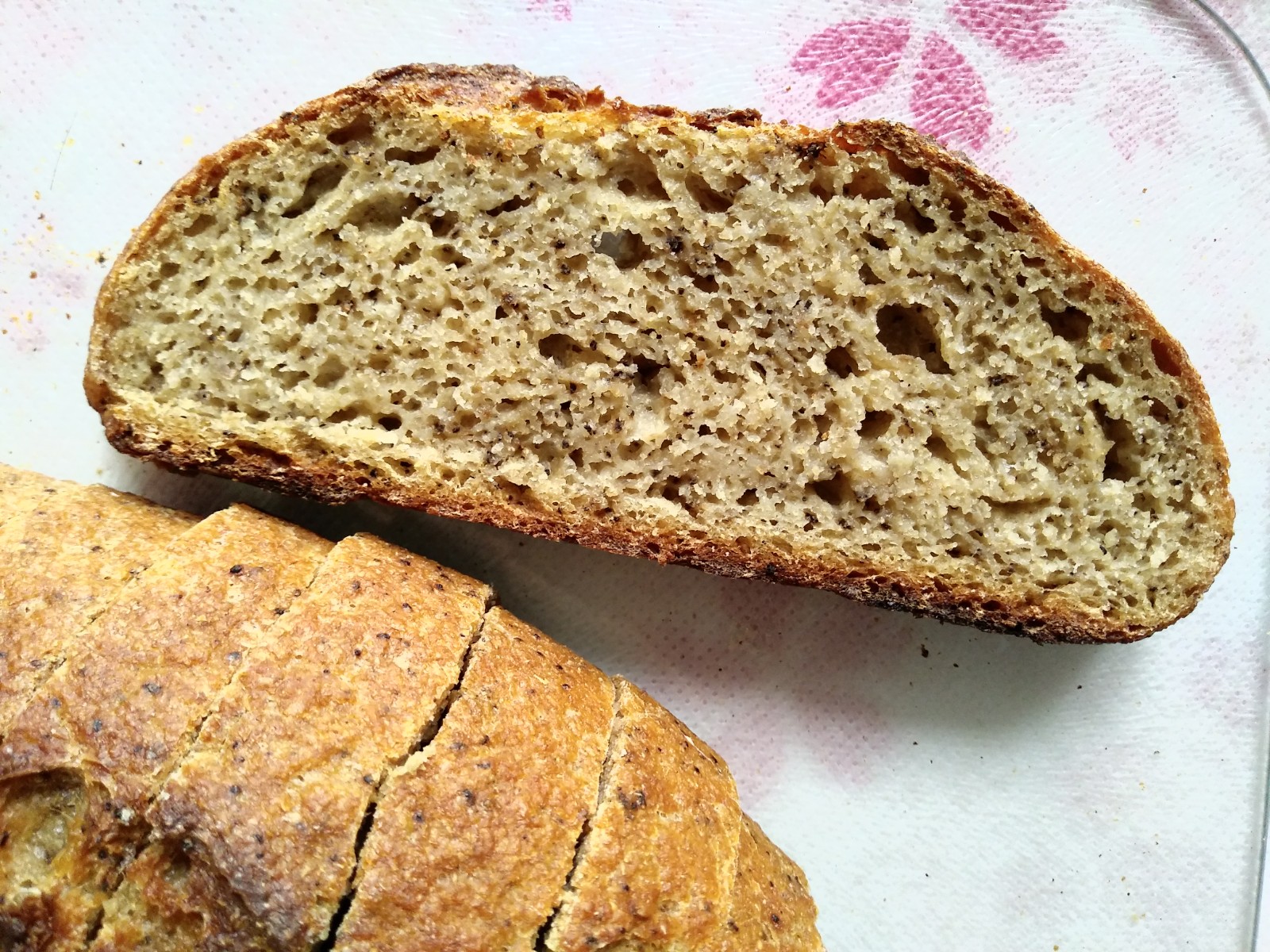 This bread has a hint of added bitterness from the tea leaves, which I find to be pretty pleasant. It also tastes a bit lemony, making it a refreshing loaf. 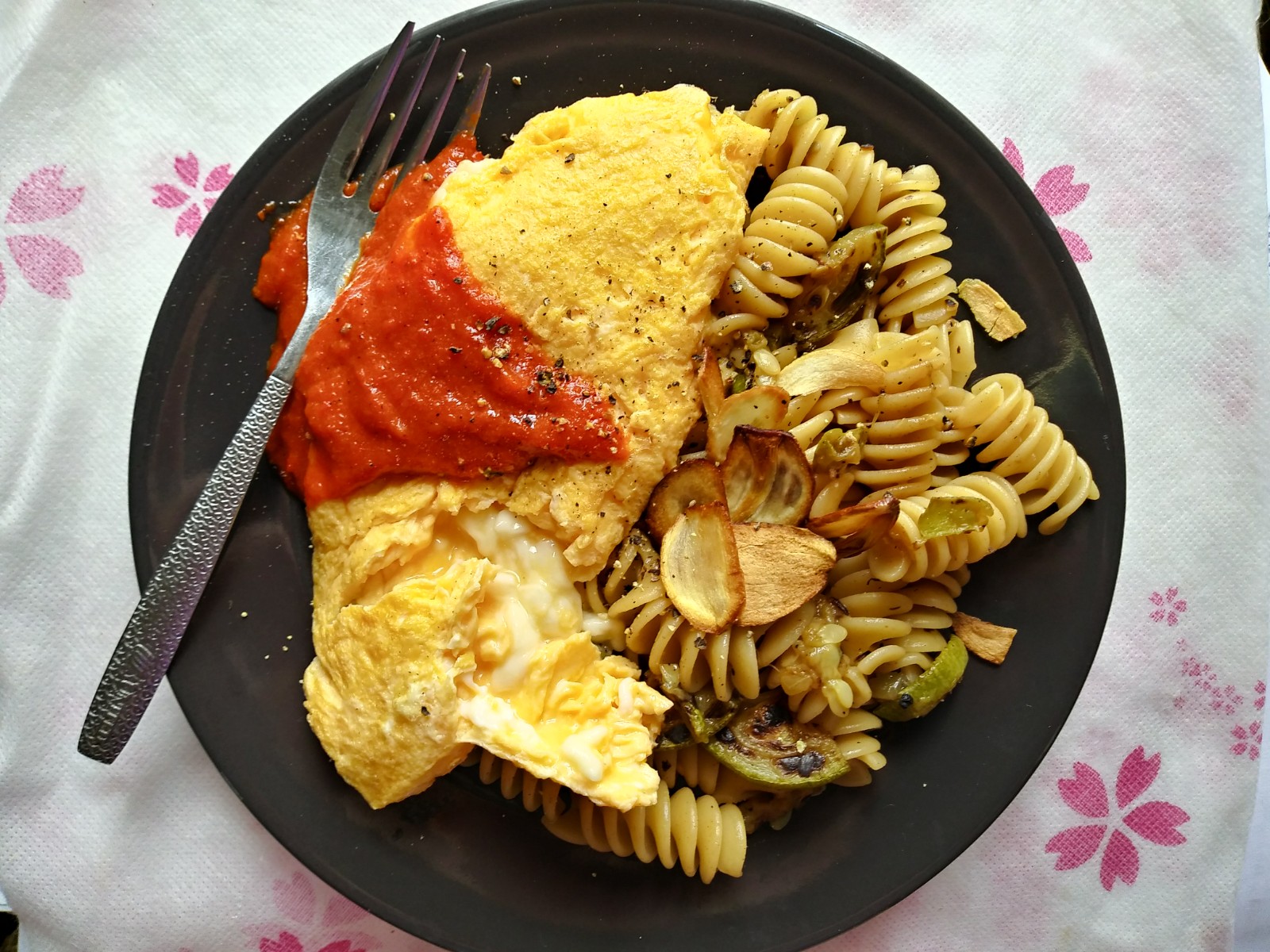 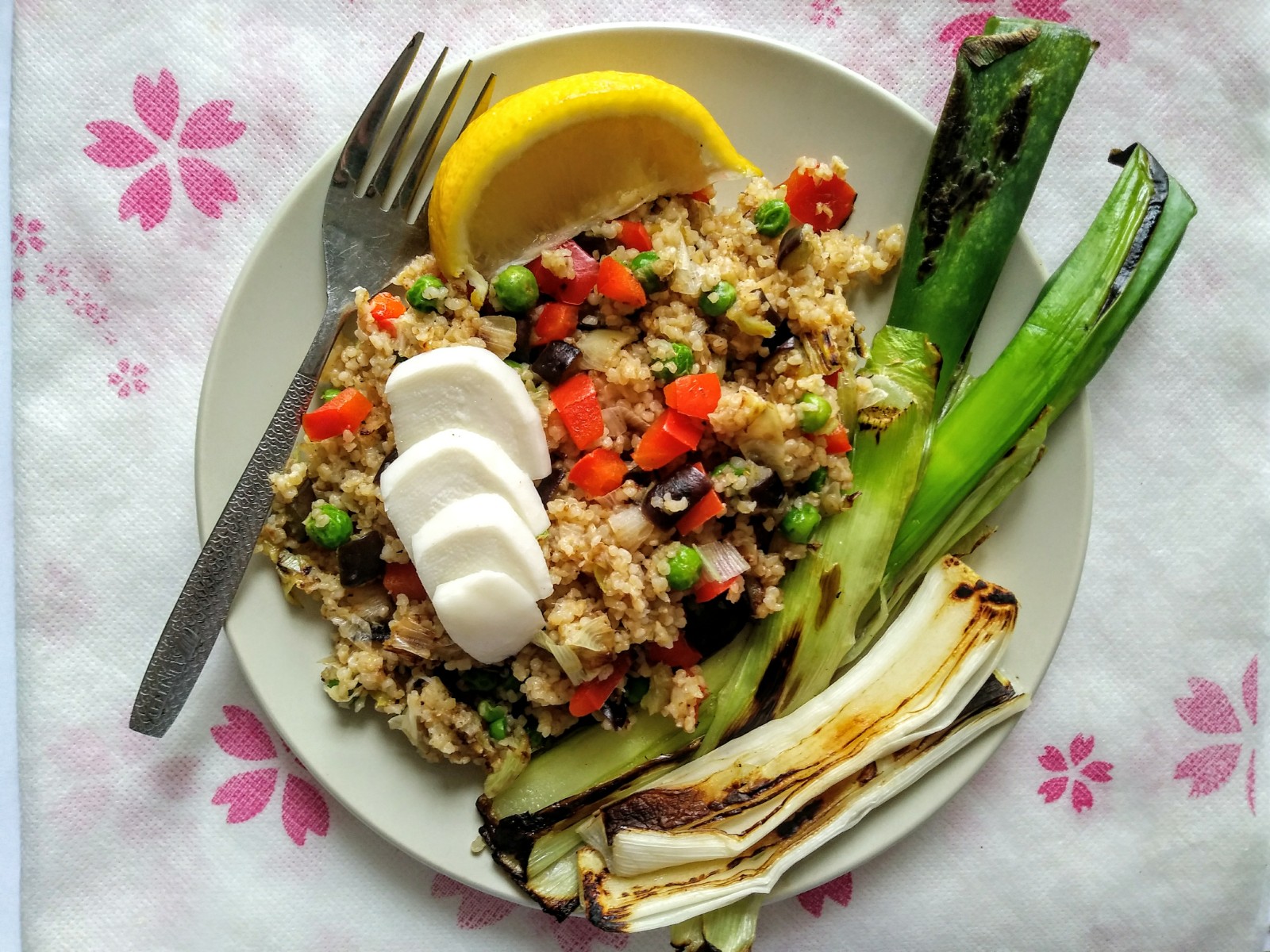 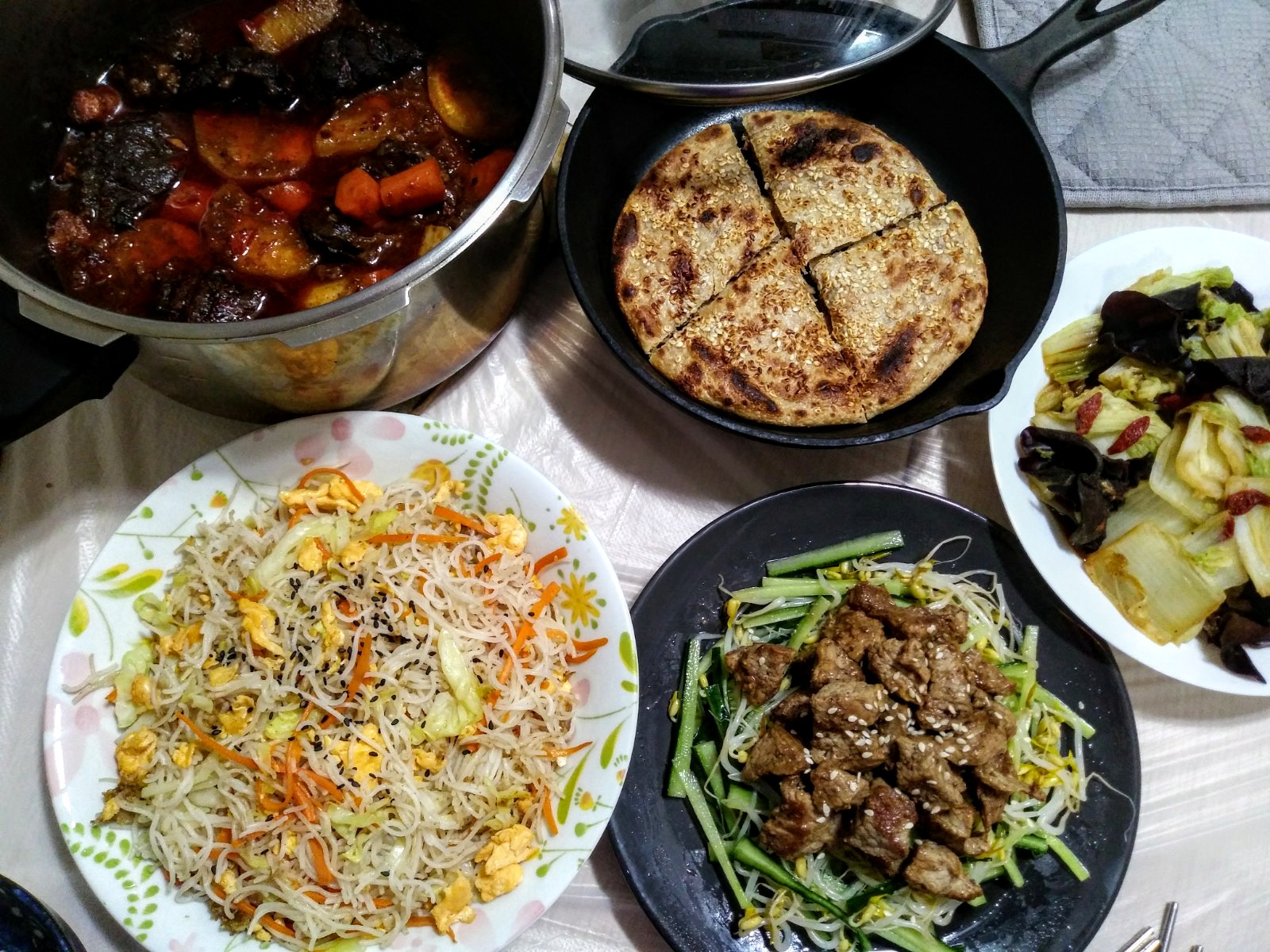 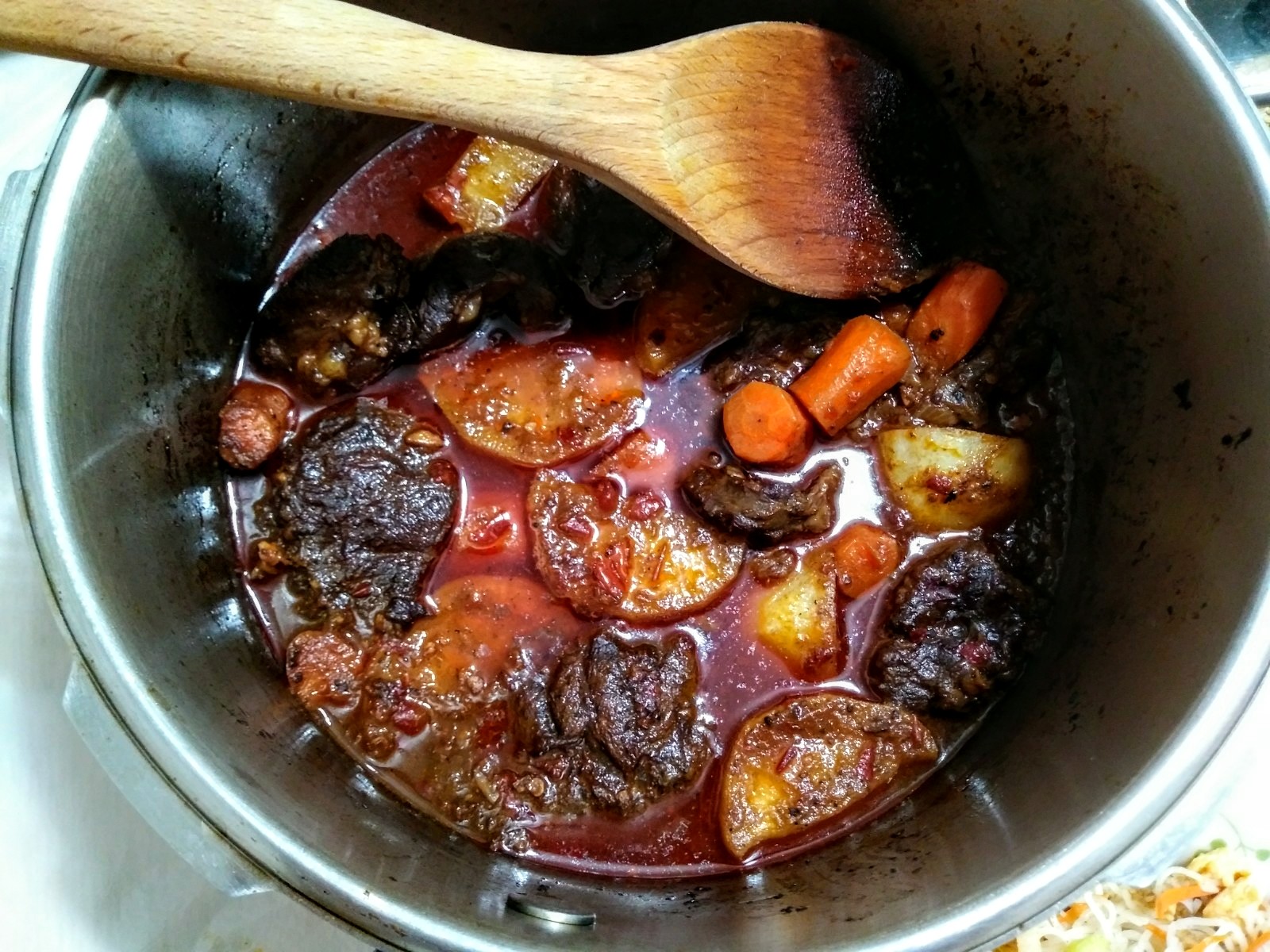 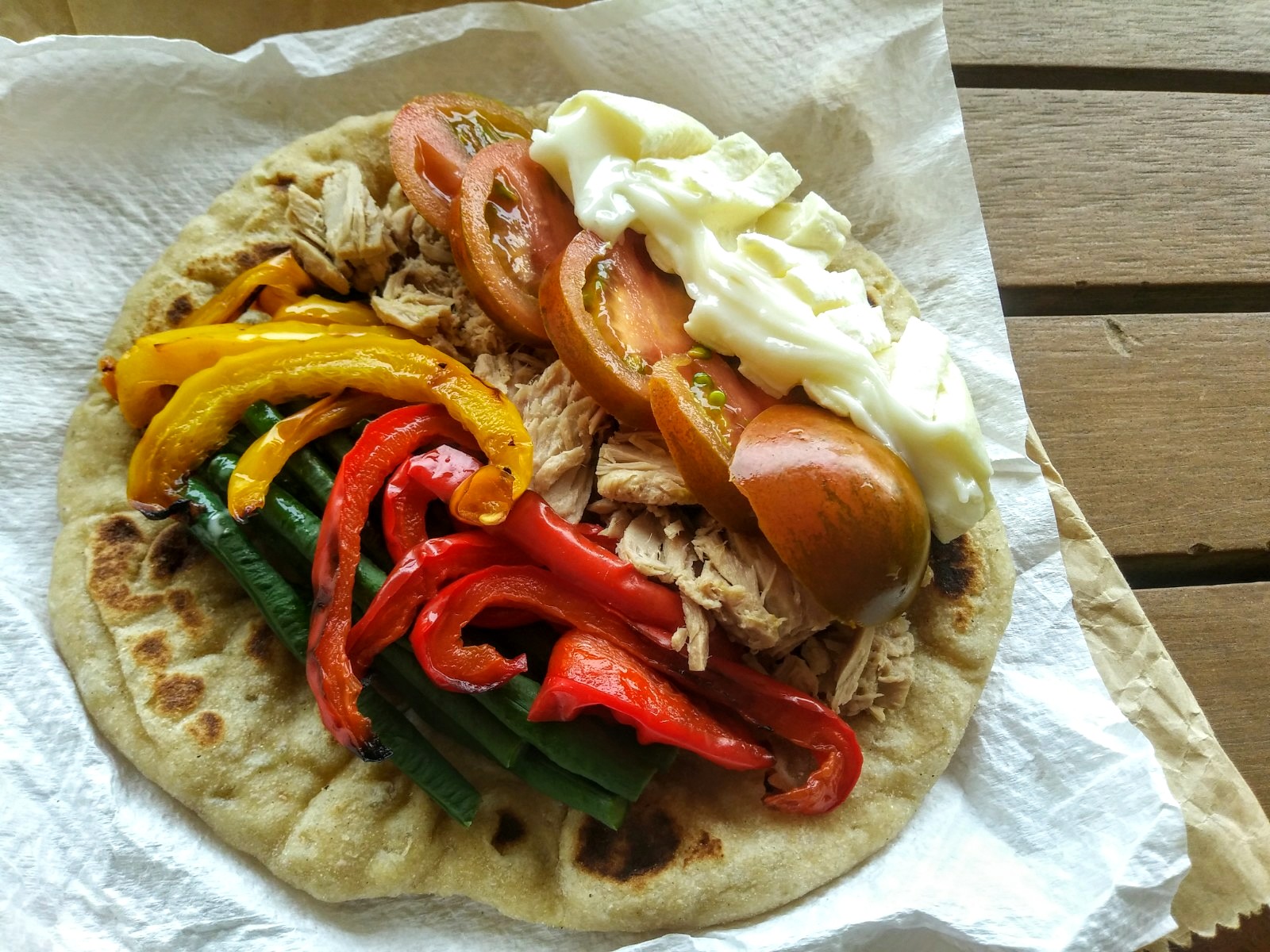 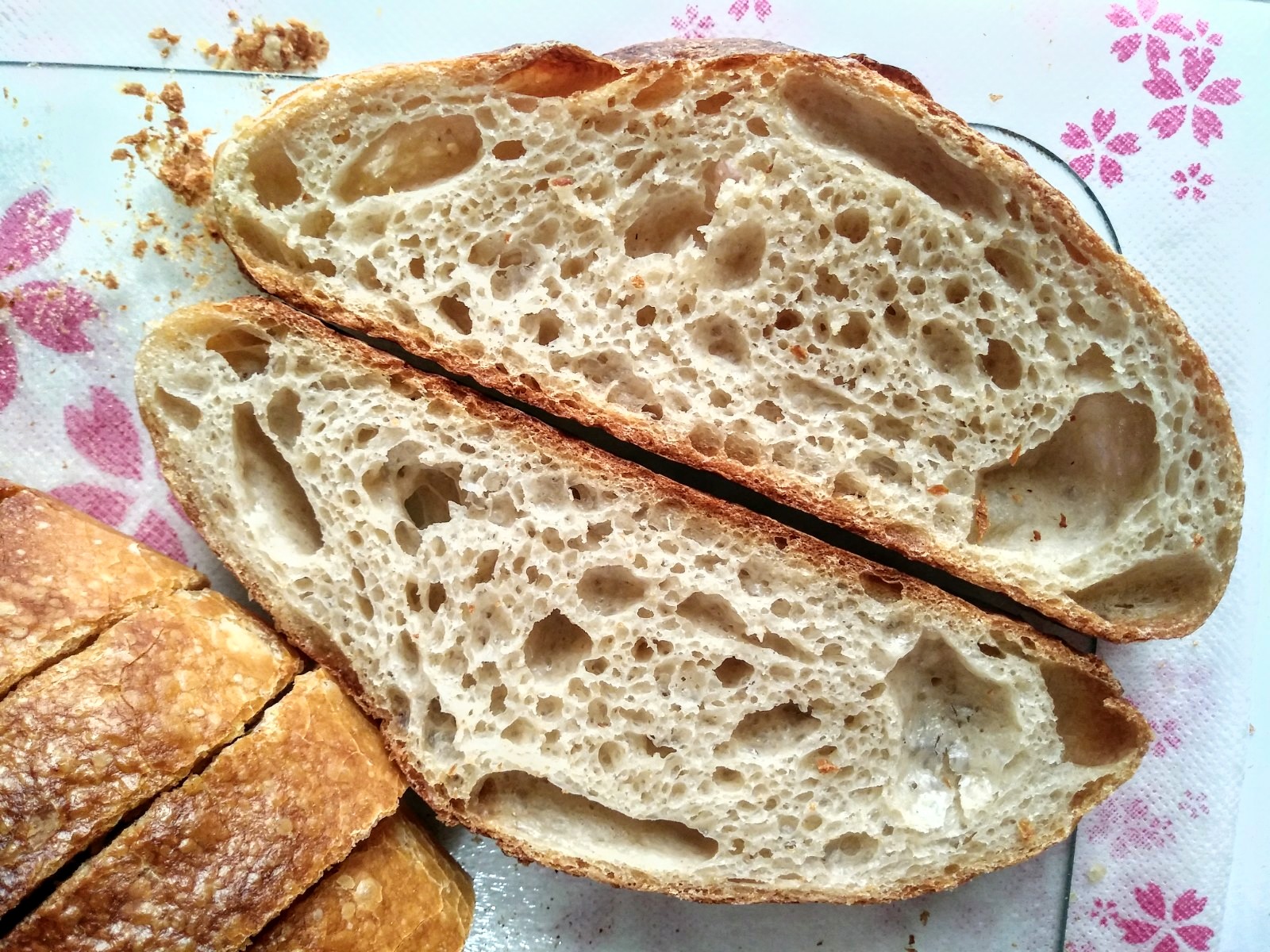 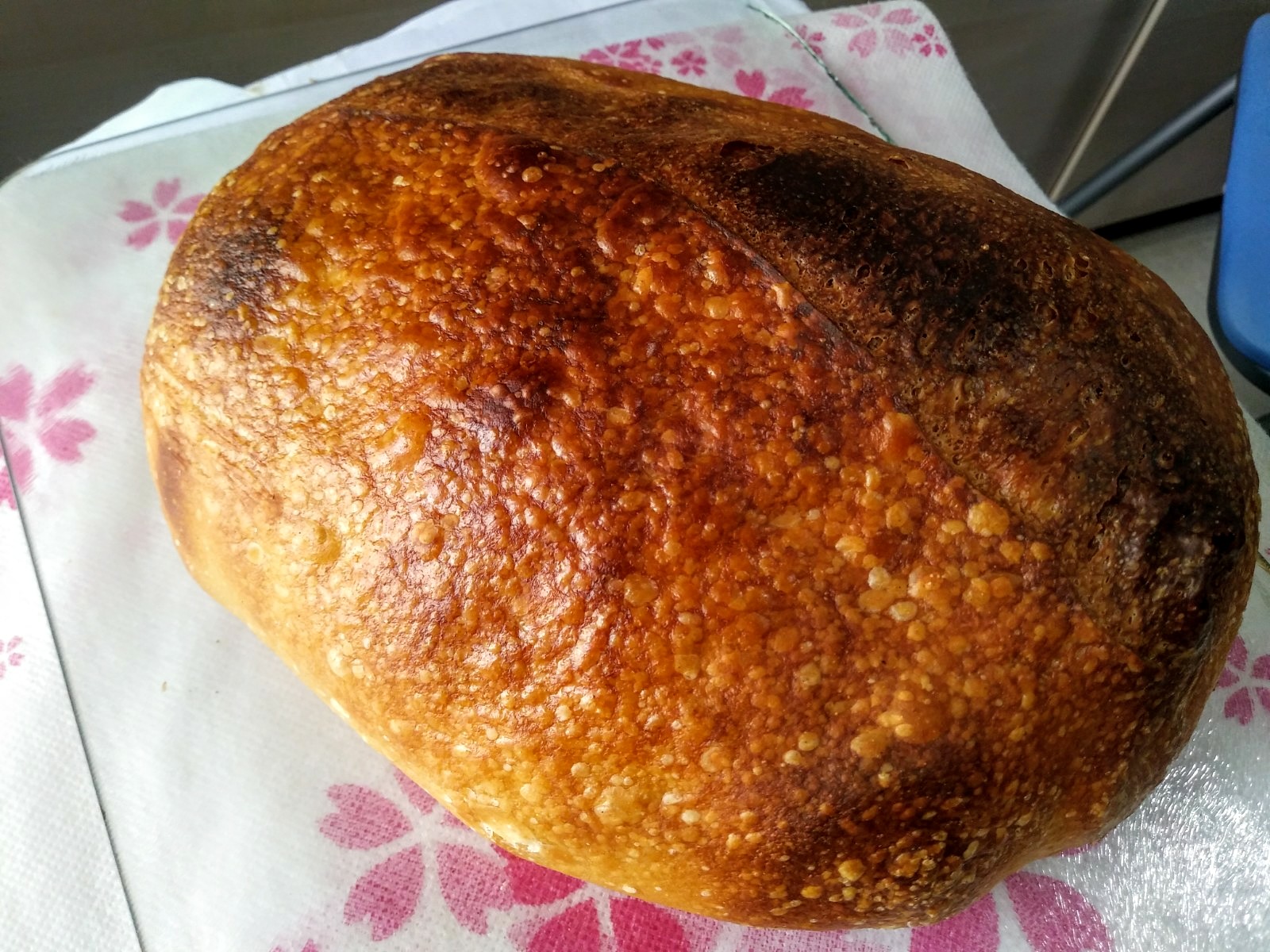 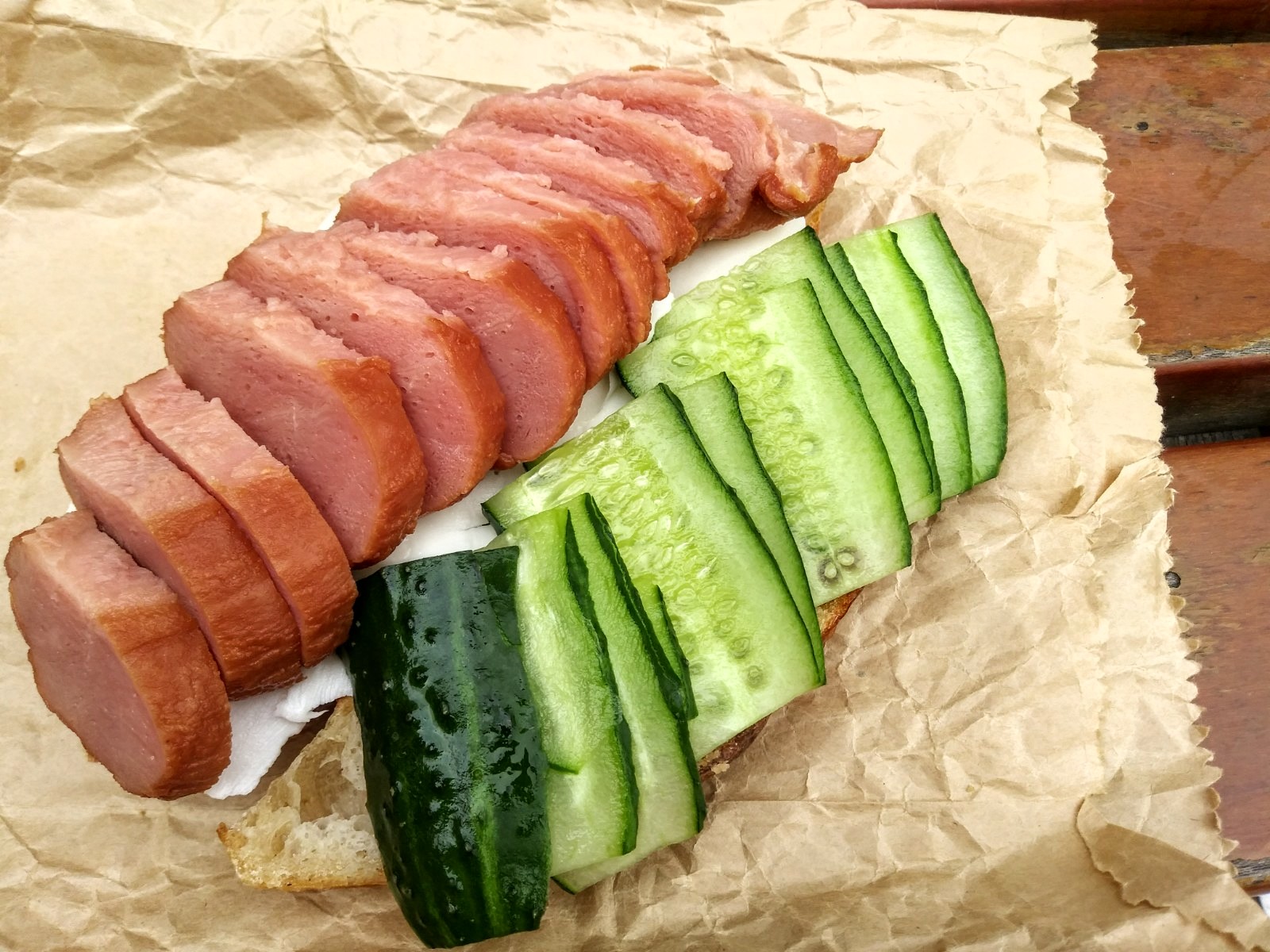 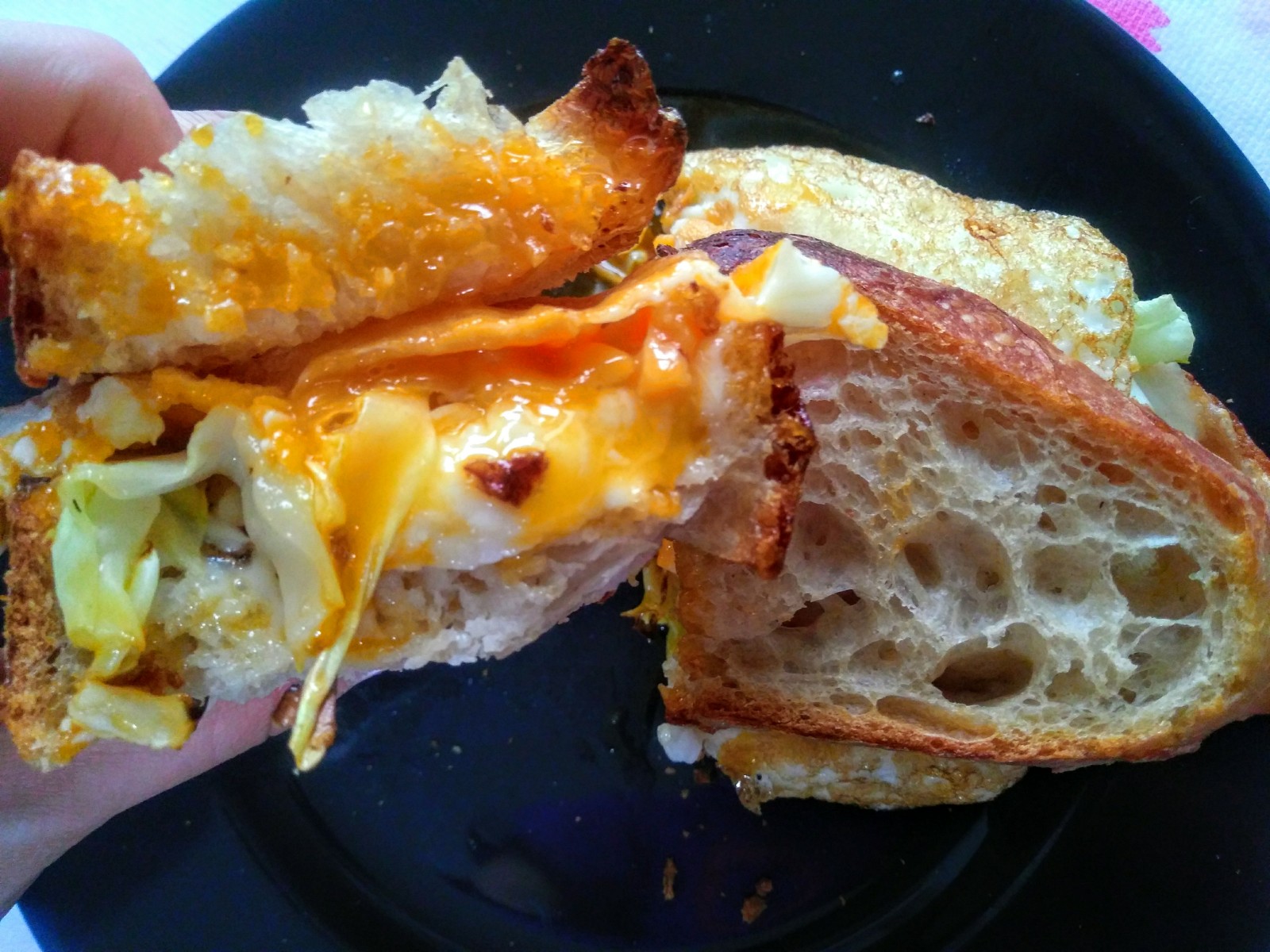 but I do have s question about your bread. You used the actual tea leaves in the dough? I have used tea in doughs before but never the actual leaves. How did that affect the texture?

after tearing open the tea bag. I was too lazy to do anything else...  The tea leaves I used are pretty finely crushed already so I couldn't detect any difference in bread texture. It's moist and soft as usual. I believe that they had little, if any, effect on dough structure. There're two reasons why I prefer using the leaves directly rather than steeping them (other than convenience). First, the former leads to a stronger tea flavour. I find that the flavour of tea tends to be quite subtle in bread. This is especially true for my loaves, which generally has a high proportion of sprouted & whole grains. Second, tea changes the colour of bread. Aesthetically, a pale-yellow crumb with specks of purplish-brown leaves just looks more attractive to me than a brownish crumb :)

Do try using tea leaves for a more prominent tea flavour. You might also soak them in warm water before incorporating them into the dough, if you're still concerned about the texture. Thanks for the comment, Danni!

Do you think ordinary tea (not Earl Grey) would give a noticeable/worthwhile flavour to bread?

That's a very general term and can be used to refer to entirely different tea blends depending on your location. Here I assume you mean English breakfast tea, which is a blend of Assam, Ceylon and Kenyan tea. Earl grey is generally milder when compared with English breakfast tea. However, the intensity can vary greatly with the brand and origin of your tea leaves. The tea leaves to water ratio obviously matters too, if you're brewing tea instead of using the leaves directly.

I'd narrow this to 3 dominant factors: tea vs. leaves, quantity of tea leaves used, and the flour composition of your bread. For more tea flavor:

1. option for the leaves rather than the tea

3. choose a white bread formula over a whole grain one

That said, I bet you'd get noticeable tea flavour anyway as long as you use enough tea leaves.

Thanks - I meant that Earl Grey contains added citrus flavouring and isn't 100% tea. I wondered if you mostly taste the bergamot, or if the actual flavour of tea comes through as well.

I didn't realize this before you brought it up, indeed the citrus flavor is what comes through the most. When I uncovered the dough midway of the bake, a lemony scent filled the kitchen instantly. The bread undoubtedly has more taste of the bergamot. As for the tea itself, it contributes little other than some pleasant bitterness to me. However, this is probably because there are too many things going on in this bread.

Hmm...I think I'd make a white loaf next time and see if I can taste the tea.