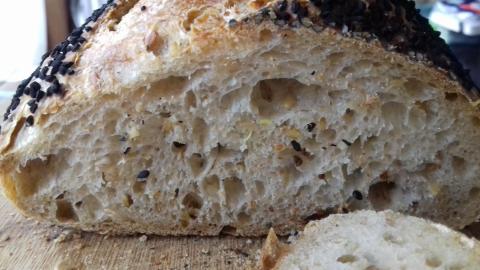 As I mentioned previously, Abe taught me many months ago about do-nothing bread -- I think it was to help me get over (yet another) failed bake. This was ostensibly foolproof and painless. I believe it's based on Teresa Greenway's overnight sourdough, which in turn might have been based on Yoan Ferrant's do-nothing, 16-hour bread. In any case, Abe gave me an easy-to-remember formula, and I've used it faithfully for the occasional midweek bake, when running low on bread.

I'd been afraid to tweak, fearing dire consequences of any variation during the course of the 12-14 hours of bulk ferment, although occasionally swapping in 10-20% of something other than white flour.

But last week, I did make two changes at the same time: swapped in 10% whole wheat, and added a handful of seeds. While the loaf lacked in loft, the crumb was good, although less flavorful than, say, the Hamelman 5-grain levain. But also much less hands-on.

Having been recently converted to soakers, I'd wondered about, but was afraid of, adding a soaker into the mix. Wasn't sure what having the stuff ferment overnight in the dough would do.

Then CedarMountain posted his fermented oat loaf. Well, if he could ferment his soaker overnight, how terrible would it be to add a soaker that would ferment with the dough?

So I refreshed my starter and poured 100g of boiling water over 50g of rolled oats. When the fomer was nice and active and the latter had cooled, I took 20g of one and all of the other, mixed them up with 500g flour (T65 bread flour with 15% T150 whole wheat), 350g water and 10g NaCl, covered and left overnight on the counter, with one set of folds before going to bed about four hours after mixing.

Very poofy, proofy, sticky dough the next morning. Turned it out onto the counter and gave it a couple of sets of letter folds about 30 minutes apart. By then the dough became workable and tacky, rather than sticky. And too slack for me to shape as tightly as I would have liked. Gave the loaves a coating of nigella seeds and plopped them into baskets.

A couple of hours later, preheated the oven, turned the loaves out into the roaster, spritzed, slashed, spritzed and baked covered for 20 minutes, then 20 minutes open. 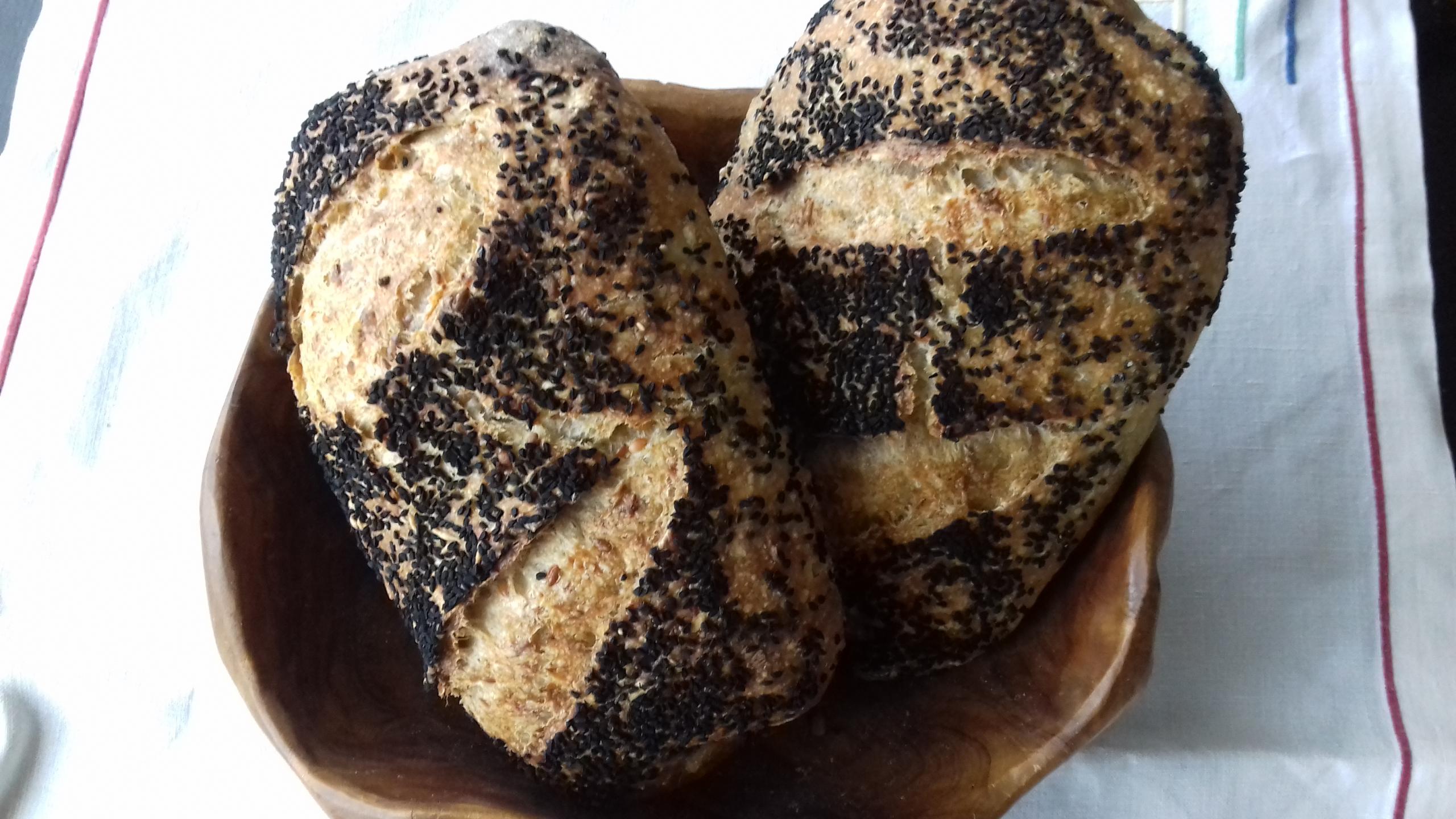 Like I said, I had trouble shaping these, but considering how slack the dough was, I'm pretty satisfied with them and will continue to work on shaping.

Next bake: something with a CedarMountain fermented oat soaker. And maybe some dried fruit and cinnamon…

awesome! The crumb looks nice and tender. Good for you for trying new things!

Isn't it amazing how many ways we can combine four ingredients? Yes, the crumb is wonderfully moist and the crust is nice and crisp.

Looking forward to your next bake,

You must be very pleased.  Gorgeous crust and crumb.

Could you tell us the general formula?  I'm so interested.  Abe is always so helpful.

Thank you Hester, yes, I'm quite pleased, especially since, looking back at my notes to find you the formula, I realized I'd used weaker flours than what Abe calls for.

Here is the recipe he so generously shared:

Cover the bowl and leave to ferment for 12-14 hours. I'd check up on it in the morning and see how it's doing.

You'll see even by the set of stretch and folds before bed the gluten is well on its way to being developed.

When ready proceed onto the pre-shape. It can be quite sticky but flour the bench, turn the dough out onto the floured surface and give a letter fold one way and then the other.

I find it can help doing two pre-shapes at this hydration and long ferment. So after the dough relaxes a bit give it another letter fold one way and then another. Then with the seam facing down tighten up into a boule. Rest.

About 15-20 minutes later lightly flour the top, flip the dough onto its head so the flour side is down and shape.

Place into a prepared banneton and final proof until ready. If you want to incorporate fridge time then leave out for an hour and refrigerate for at least a few hours.

Abe recommends flour at no less than 12.6% protein, and up to 10% whole wheat or rye for swapping in. But further along, he remembered that he'd done this with 20% khorosan and it worked fine. My T65 is only 12% protein, and it seems to have worked fine, too.

So for this bake, I completely forgot about the second pre-shape, which would certainly have helped with these loaves. But I added soaker and let the whole thing ferment overnight, with 75g of whole wheat T150 and 425g of T65 bread flour.

Not only does this taste good, it's wonderfully flexible for a midweek bake. You must give it a shot, I'm sure you'll like it.

This will be perfect for my new addiction to Kamut.  I tried a 20% Kamut (white) yesterday, also at Abe's suggestion.  I was nervous b/c of how long it needed to rise..... I mean 24 hours combined bulk and final would not be too long.... so this is perfect.  Here's my bake from then. 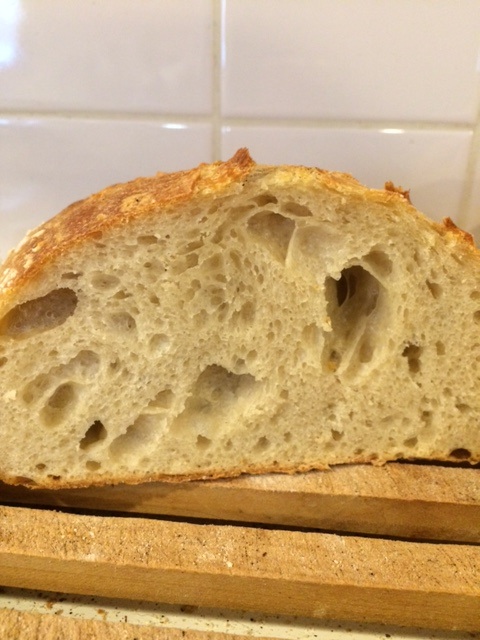 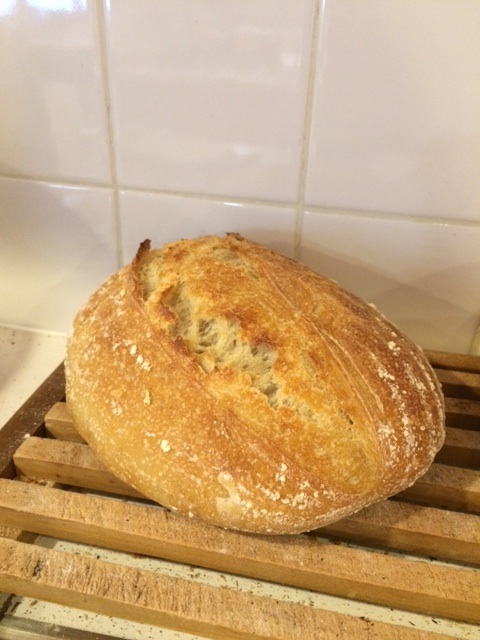 Hydration in the above recipe is about 70%, neglecting water in the starter (should be 5-10g). Abe's "Do Nothing Bread by Yohan Ferrant" and Teresa Greenway's video uses 90% water.

What I wanted to say was, I thought that my Kamut flour would be conducive to the Do Nothing Bread.  The above loaf was done using another formula I have and was about 72% hydration, maybe a bit more.

Sorry for the confusion.

This is not my recipe. I taught the method to Carole who now refers to it as my recipe. True, it's based upon Yohan Ferrant's "do nothing bread" that is 90% hydration but Teresa Greenway used this method at 70% hydration for her San Francisco sourdough recipe. I find that keeping it at 70% hydration, 80% bread flour and swapping 20% for something else works very well. It's all based upon no knead method and a long ferment. As long as you keep the hydration high enough for gluten formation and the inoculation percentage low enoughenou a long ferment then it's a nice flexible recipe to build upon.

Yohan Ferrant himself was just describing the method and reasoning behind it. But he himself said you can play around with the starter %, flour used, hydration and ferment time. What's more important is less is more! He used 0.5% starter, 90% hydration, bread flour and 24 hours ferment. Teresa used 60:40 whole wheat and bread flour if I remember correctly. In her San Francisco sourdough she used all bread flour, 70% hydration, 4% starter and a 16 hour ferment. So you see the method is flexible with no one particular recipe. What is most important is time doing most of the work with minimal input other than mixing and shaping.

So how do like the taste of the bread with the oats in it?  It sure looks tasty. Well done and happy baking DW