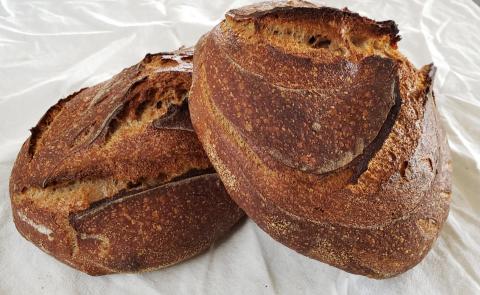 Common sense suggests to tweak bread recipe variables one at at time so as to be able to better isolate and understand the effect of each variable. That is my usual practice but this was a "let's try all this and see what happens" weekend bake.

First of all, I received two flour sifters last week and decided it was time to get serious about milling and sifting my own high extraction flour.  With that in mind I decided to bake a variation of Chad Robertson's Tartine 3 "Ode to Bourdon" bread.  My bread is a mix of 500 g high extraction Marquis wheat /250 g whole grain Red Fife flour/ 250 g whole grain spelt/rye flour (substituted for the white whole wheat flour - I was hoping this would also balance out the hard red wheat flour). The autolyse was 3 hours at room temperature, 87% FDH.  I opted for a young levain to moderate what I expected to be a vigorous bulk ferment with all the whole grain flours; some of the sifted bran was used for the levain and some for coating the shaped loaves.  Bulk ferment was 3 hours; cold proof 10 hours.

And then the second tweak, after reading the recent post comments by Filomatic, Kat and Carole about Ecole internationale de boulangerie instructional videos, this one caught my attention:  https://www.youtube.com/watch?v=Sn0INYBr1fA.  As Filomatic appreciated, there are some serious lame/blade skills on display but what intrigued me most was the explanation about the relationship between scoring and crumb structure. I decided to add yet another tweak to this bake and tried several of the scoring methods described and demonstrated in the video.  It's not as easy as the instructor makes it appear and my results were mixed, to say the least!  The boule opened up nicely, almost like the one in the video; my batard however looks completely random with only a slight resemblance to the example in the video.  Interesting to note the crumb structure is very uniform though.  And the bread tastes really good so it doesn't bother me as much that it doesn't have the same esthetic appeal as the Ecole internationale de boulangerie bread, just need more practice, more baking. 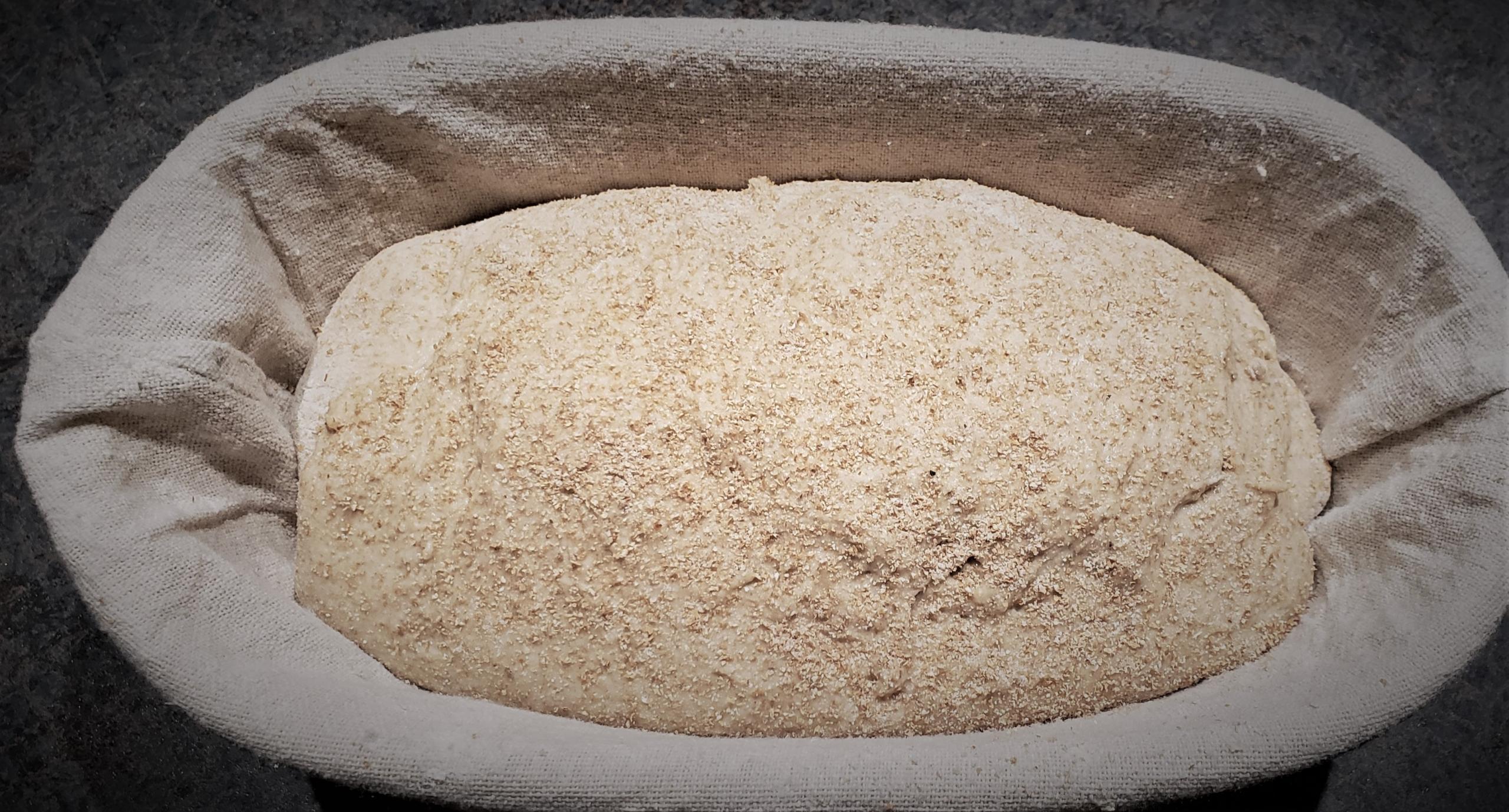 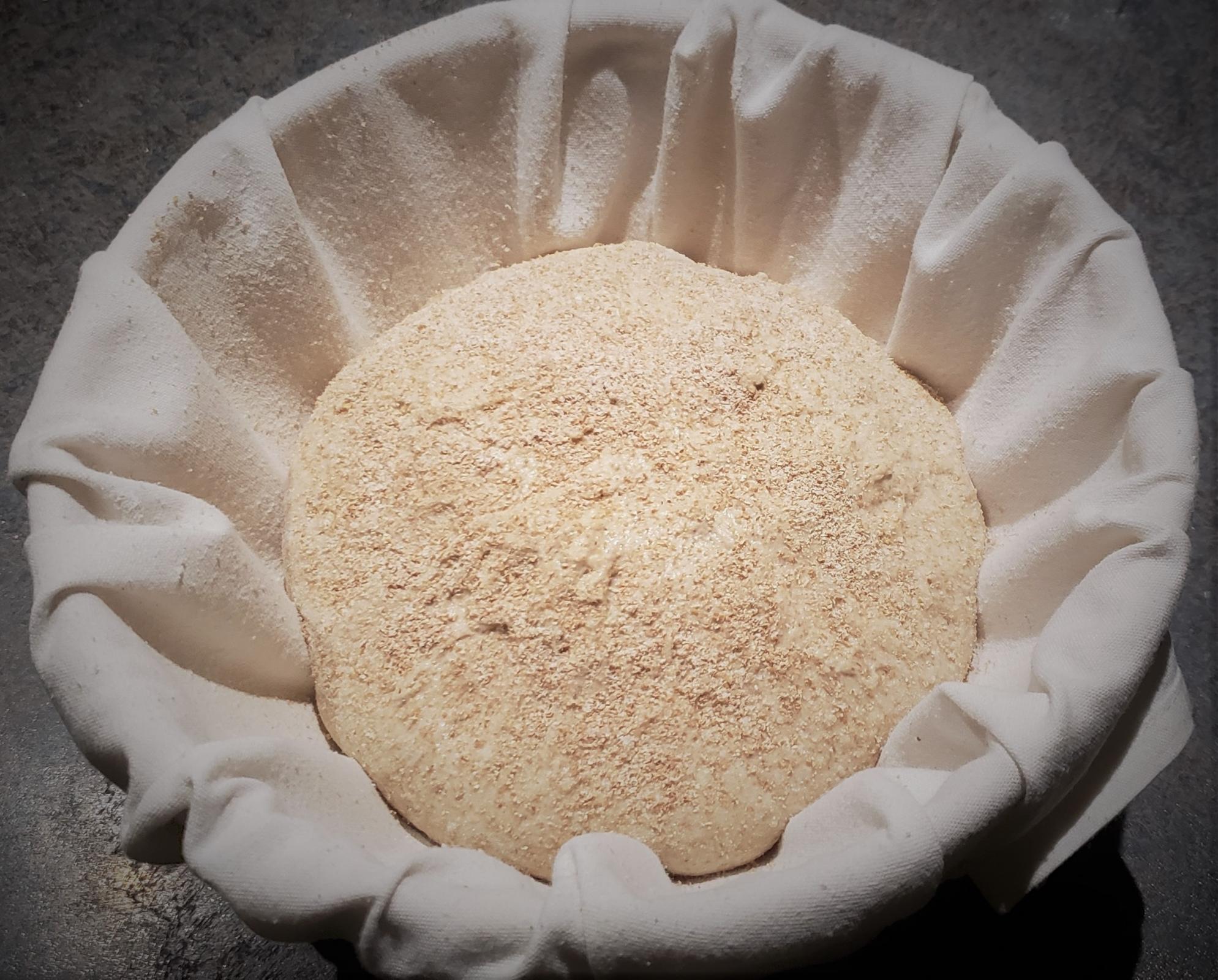 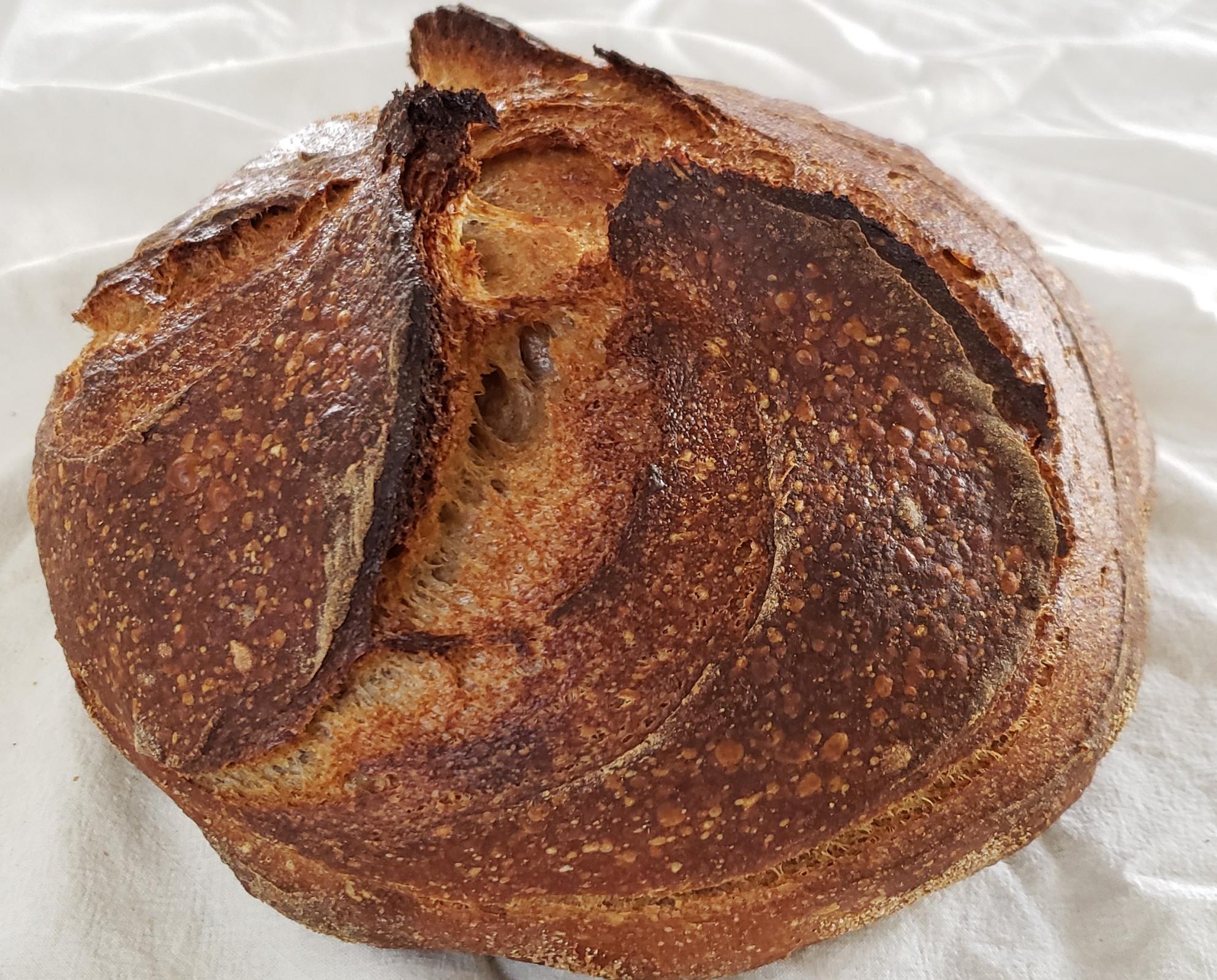 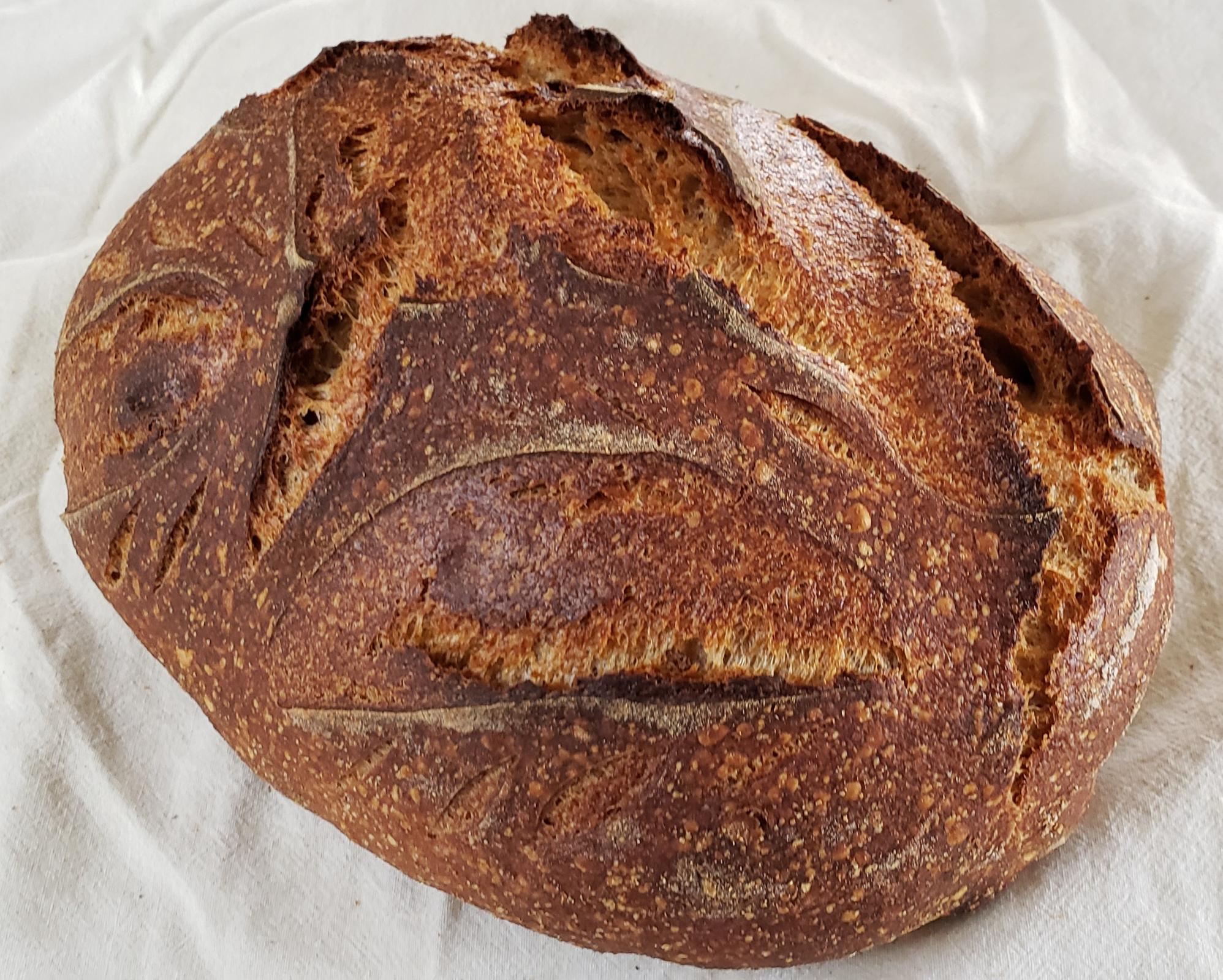 with the spontaneous  changing element in your baking but I learn this way a lot too....They all look so beautiful and delicious with some blisters and colour of crust and a nice and regular crumb.....I also like the Tartine 3 porridge bread with walnuts....must try the Ode to Bourdon soon... Kat

The spontaneous changing element you speak of is the way I like to learn too Kat, it's when it becomes spontaneous changing "elements" that the chaos ensues!  Thank you for your kind comments and for the video link information.  Keep baking and experimenting, your posts are always informative and something to look forward to.

Now, you cut that out! Those are beauties! and I want to take a bit out of that crumb!

Glad you're enjoying those videos. Did you see the one where he mixes, ferments and preshapes the same batch of dough but shapes three different ways? I believe it's the last half of the (long) pain de campagne video. Also an eye-opener, for me at least.

Hold on while I locate a 24 inch bench knife.  That is amazing.  To have such precision and such a hands off rustic approach in the same batch is really inspiring, and so French.

bench scrapers for plastering walls or something?

I'm so tempted by the en planche method, but I never make more than 2 loaves -- and I must continue practicing shaping and scoring.

Have a go at it Carole, I am pretty sure you will have many people happy to have some of your beautiful bread...bake lots!

In my world, "rustic" is a handy label for any of the random looking loaves coming out of my oven!

aesthetic appeal I would have a bite out of my Big Mac screen !!  Beautiful beautiful loaves. I don't have that book but I do have flour  assortments. I am planning on getting a real sifter...all I have currently are my Mom's old hand crank ones from the 40's ! Lots of sentimental appeal but not what one needs for high extraction sifting. Where did you get yours and how fine is the mesh ?  Your slashing is wonderful  as well. I always end of changing multiple things and taking poor if any notes . Always a guessing game as to what will appear from the oven. c

Hi Caroline, thanks for your kind comments.  The sifters I have are old ones a friend recently gave to me (her family owned a bakery for many years) - they are old round wooden ones with metal mesh, no idea what gauge though. I had been looking online to find some before my friend gifted the family heirloom sifters to me.  I found some at Breadtopia: https://breadtopia.com/store/flour-sifter-40-mesh/ and some at Korin: https://www.korin.com/TK-610-02-30  I have no personal experience with these sifters so can't tell you much about them. If you're thinking about sifting your own flour, this is a blog I found useful and informative: http://tartine-bread.blogspot.com/2014/03/bolted-vs-high-extraction-flour.html

As to the slashing, that is a good description!  After watching the video and having a go at the same techniques, my attempt was definitely more of a slashing exercise than the controlled and elegant scoring demonstrated by the instructor.  And that's the beautiful thing about this amateur baking experience, as you say, it's always a guessing game as to what will appear from the oven, Christmas every bake!   I look forward to seeing some of your sifted flour bread baking Caroline.

Great work.  Yes, the physics of bloom variation and gas distribution by scoring is an eye opener.  I need to make that recipe again.  I got a good result the first time around before I got my mill, but I haven't tried it using my own sifted milled grain.

Hi Phil, a thank you to you, Carole and Kat for the video links, lots of interesting things going on at the ecole internationale de boulangerie!  Learning to bake bread in that beautiful setting, in France, all that good bread and local food, what's not to like about that?  Although learning how to wield razor sharp blades like that would be challenging I think.  Hope you have a go at slashing up some dough, will watch for your next bake!

Ok, the pressure's on now!  I want to get more practice at shaping.  Too bad there isn't a boot camp for this.  Shape intensively for 2 hours a couple mornings a week.

I love using Red Fife, and I’m still new at this. I don’t mill my flour or sift or anything like that, but this is a bread I want to make. Your scoring is fantastic!

Thanks syros!  I too am very fond of Red Fife and my current favourite, Marquis heritage wheat. If you are thinking about getting a small home mill I encourage you to do so, there will be no turnng back once you taste bread you've made with fresh milled grains.

I never would have thought that scoring would actually affect the crumb bit that video certainly made it clear. Makes me wonder what he would say about baking seam side up the way I do and not scoring. Thanks for the link!

You boule certainly gives the boules in the video some competition and I even think it might be the winner! 😊

When I watched the video it made sense and was something I wanted to try as a point of interest, something to be aware of.  No doubt it is a significant teaching point in the ecole internationale de boulangerie's course as is likely in other culinary schools too. But for many of us, the self-taught home bakers, It's another one of those valuable things we stumble upon, something worthwhile adding to the bread baking experience file.  As to what the instructor would say about the crumb on your seam side up bread...he might have a technical opinion but I am pretty sure his overall impression would be that you're baking some very good bread, and after all, that's what it's about, yes?  No worries with your bread Danni, it's all good and looks good too, crust to crumb!

Great inspiration and another superb baking.

Thank you pul, I will watch for your "Ode to Bourdon" post!

Sounds like I need to watch that video. I am aware of how scoring effects loaf shape, but not how it effects crumb structure. I am prepared to learn something new! .............

Very interesting! Several things impressed me. First, the chef was using a fairly high hydration dough. Second, he used the simplest, most traditional lame. Third, he scored remarkably deep, for such a slack dough. Fourth, he was not after beautiful scoring. He seemed mostly concerned with the effect on the crumb. Maybe that was just the point of this particular video. Last but not least, this was new information. It will make me think about the effect of other scoring patterns.

I agree with your observation that the instructor seems more concerned with the crumb effect, that maybe that is the point of the instruction. Too often my focus on making a "pretty" looking loaf of bread, or rather, my disappointment that it is not a pretty looking loaf of bread when it comes out of the oven, distracts from a fuller understanding of all the complex things that are going on.  When he cut open each loaf the crumb structure was exactly as he had described it would be with each scoring. That was the teachable moment for me, the hard evidence proving his point.  I too was impressed with how deftly he handled the high hydration dough, the deep and clean scoring done with the straight blade.  Watching someone who is well-experienced and expert at his craft is always humbling, there's so much I have yet to learn!  Thanks for your comments David, looking forward to perhaps seeing some scoring pattern experiments from your oven.

I figurte everything I make comes out of the oven rustic and if it isn't then Lucy has failed again!  These breads are just beautimous inside and out as usual even before the scoring tutorial!  I could never figure out how to sore a 1/4" deep with my hacksaw blade I use anyway so scoring deeper makes me feel better even it it doesn't come put anything like these breads..  It's all about feeling better about yourself now a days anyway!  Love these breads and the whole grains have to make them extra special tasty too!