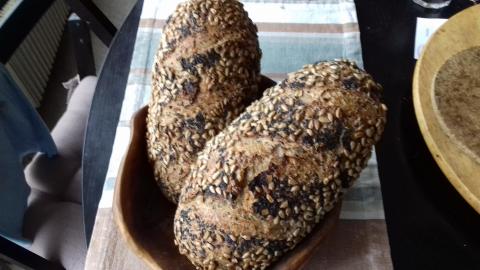 It's been awhile, and this entry is more to try and keep track of what's been baked lately.

After my third shot at the Hamelman five-grain, I went back to my usual formula, but adding the Hamelman-style hot soaker. One of the loaves actually made it down to Burgundy, where spring had put in an early appearance, as in all of France that week. 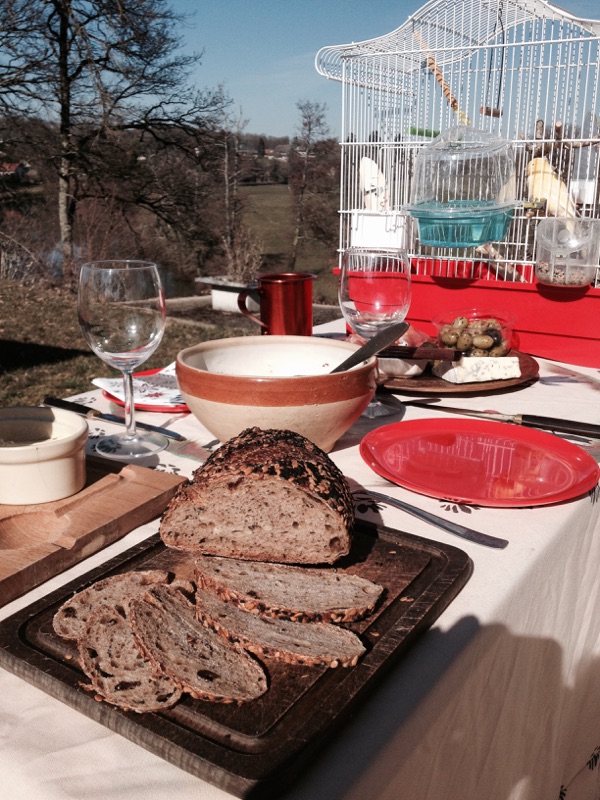 Taking a page from Ian

Finding myself with a batch of overcooked brown basmati rice, I decided to try adding some to my dough, along with a grain and seed soaker. And because it seemed a natural thing to do with basmati, I also grated in some fresh turmeric, which gave the dough a lovely color and interesting perfume. I made two loaves, but never got to taste any, since grandson was not only heading off to Brussels to see his girlfriend, but also down to Lyon to see his brother. He was kind enough to send a crumb shot and to describe the crumb as "dense, but voluptuous". So, thanks Ian! 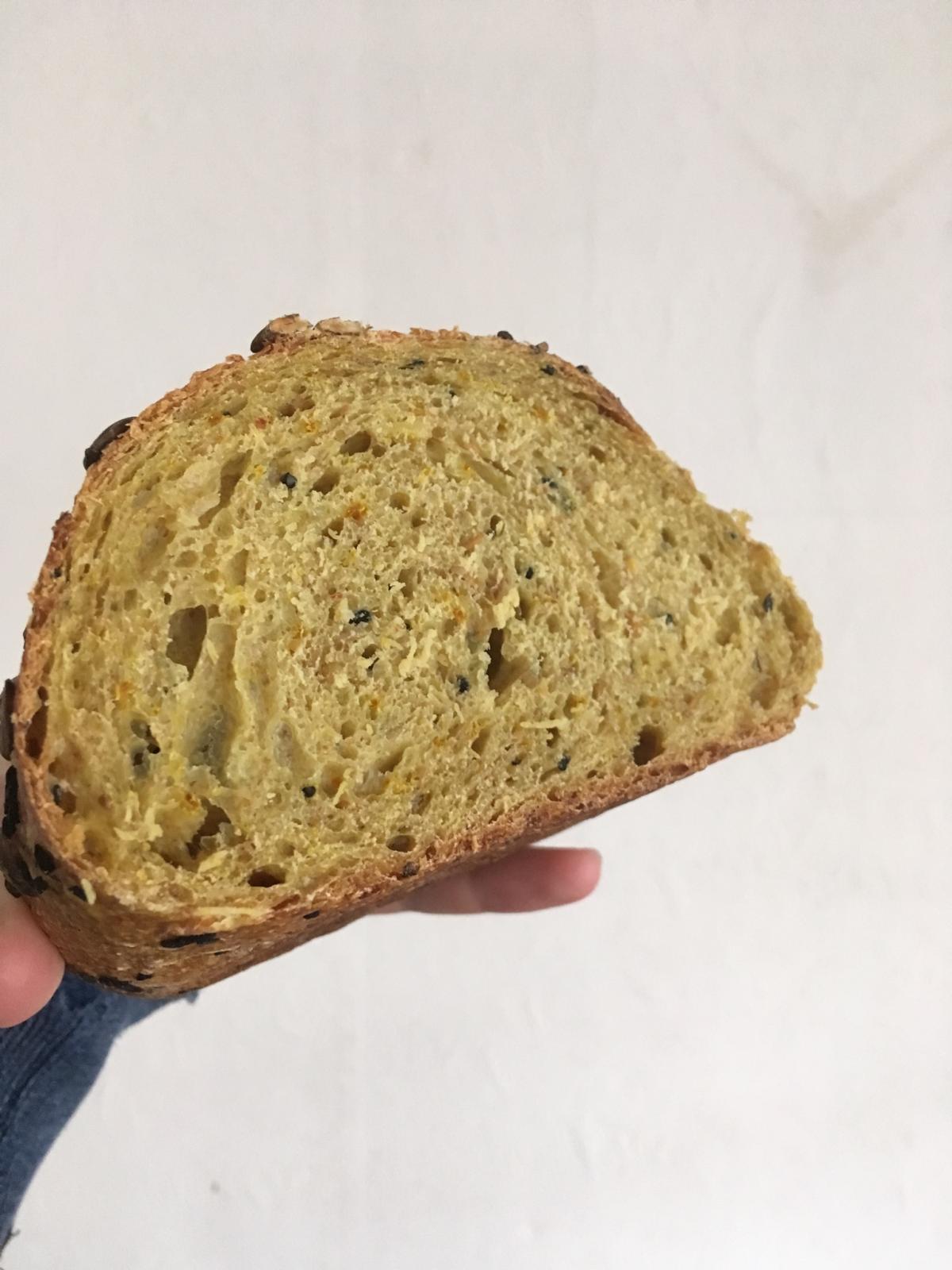 Many months ago, Abe taught me how to make a do-nothing bread, and it was one of those midweek, off-the-cuff bakes. I added a handful of seeds, but cannot for the life of me remember if I added a soaker. Probably not, since I was unsure of what would happen to it during the overnight, room-tempertaure bulk ferment. 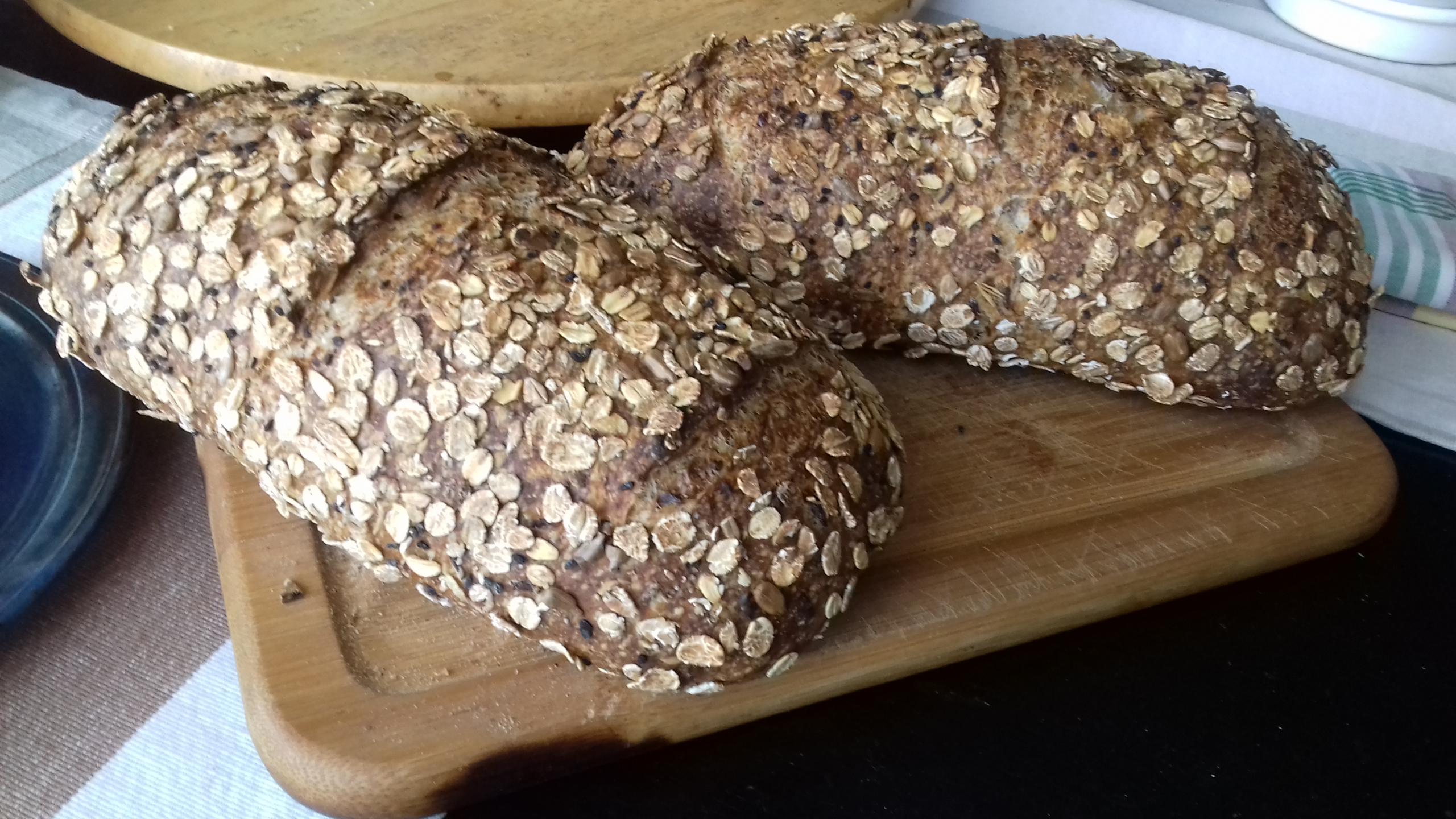 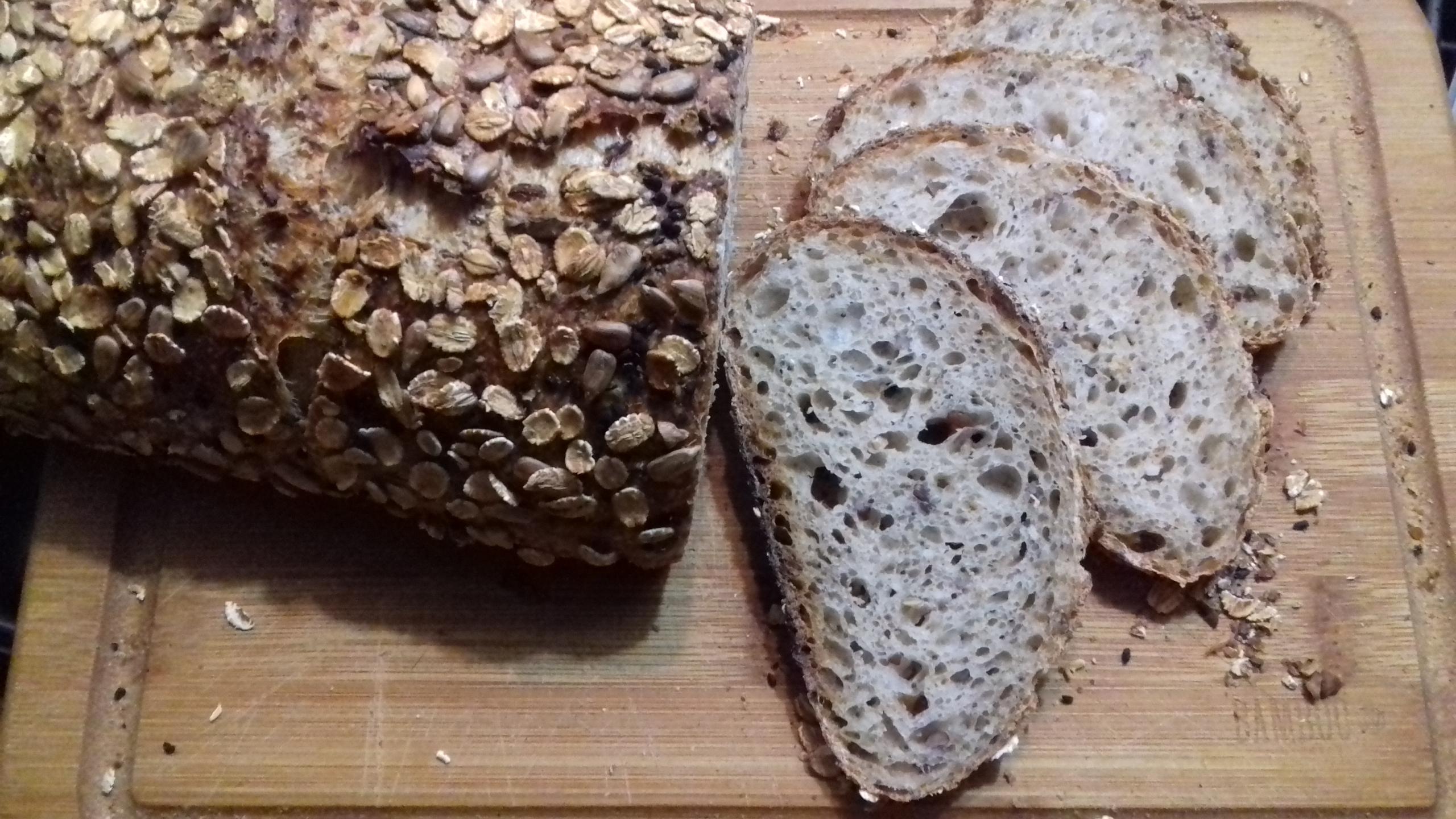 Which brings us to this weekend's bake.

Since I never got a chance to taste the rice loaf, I made some extra Camargue red rice a couple of nights ago, and actually wrote down what I was going to do:

I was curious as to what a "young" levain would do, compared to the usual "mature" one, so I did the first build on bake day -2, and made the soaker in the same evening. Sifted the bran out of the whole wheat (came to about 12g), and added it to the soaker, with 9g of water (that I forgot to deduct the next day when making up the dough!).

Bake day -1, built the second stage before heading to work, then stage 3 when I got home. Let that bubble up for about three hours, made the dough, mixed in the levain and let it sit for an hour or so. Then added the soaker, rice and salt. The dough felt lovely before adding in all of that stuff. Lots of pinching and folding before a long session of SLAFs.

Two sets of STAFs half an hour apart, then into the fridge (about 3:30am) for an overnight snooze.

(And while I was waiting around, decided that I'd also make a batch of yogurt cake with a tweak; I'd read somewhere that it was possible to swap out yogurt for starter. Since I had a little levain left over and a small handful of semolina that was bugging me, I made up 130g of semolina levain and put it aside.)

On bake day, removed the dough from the fridge and let it warm up for about three hours, turned it out onto the counter and did a pre-shape, 45-minute bench rest and final shape. Coated the loaves in seeds and plunked them into their baskets. The dough had been quite cold, so I reckoned that the final proof was going to need some time. I did remember to stick a small lump of dough into a little container to keep an eye on the rise.

In the meantime, made up the yogurt cake batter, then dithered about whether I should bake the cake first (which had the advantage of heating the oven partway and providing desert), or hold off on the cake until the bread was done, whenever that would be. Opted for the former.

Oh, the suspense! Would the cakes be baked and the oven heated up enough before the bread overproofed :-D 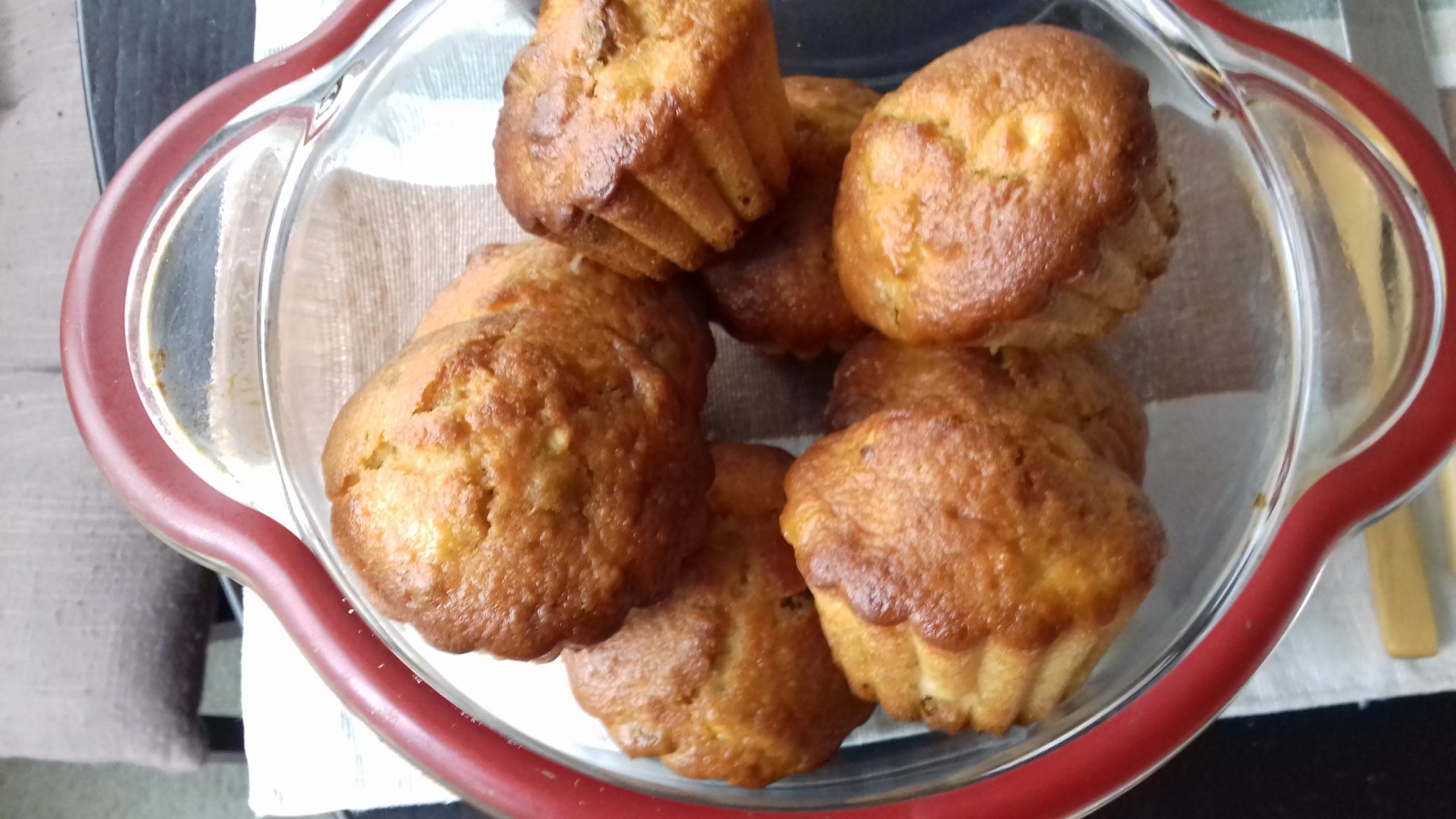 This batch made a dozen and a half of these little cupcakes; they were supposed to include toasted walnuts, too, but I ate them all while I was making the batter. And I simply forgot to sprinkle over spme flaked almonds or blond cane sugar… oh, well, we ate them anyway. The sourdough added a nice flavor to these apple/prune yogurt cupcakes.

The loaves finally went into the oven when the little lump of dough had risen by about 25%, I'll try going for longer the next time. 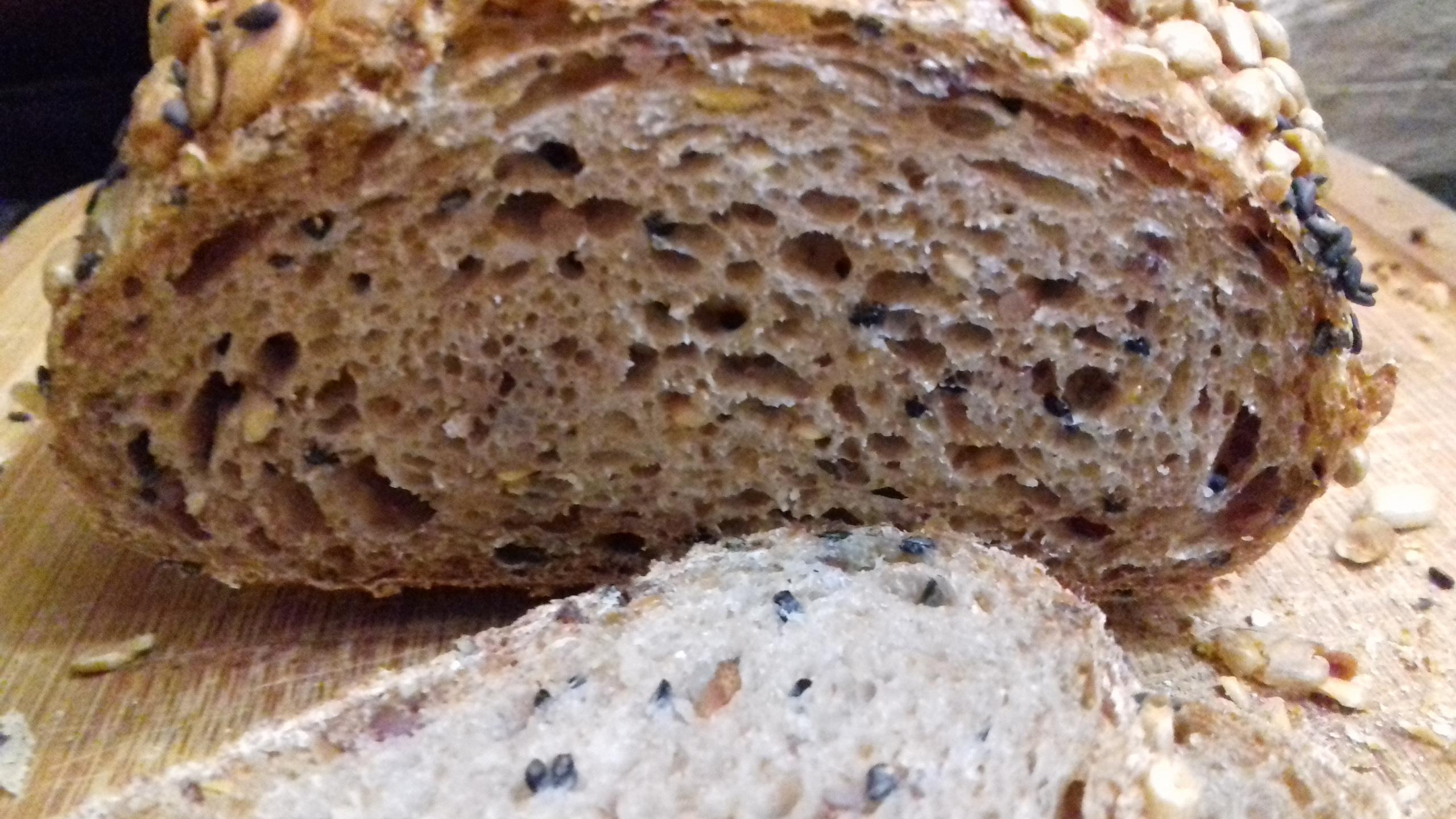 The flavor of the rice really comes through, especially when the bread is toasted. Crumb is soft and moist, crust is a little chewier than usual, but good. It'll be interesting to see the shelf-life of this loaf. One of the things I love about the soaker, aside from the flavors, is the fact that the crumb stays soft the whole week. Amazing.

While I was building the levain for this bake, CedarMountain posted a gorgeous loaf using a fermented soaker, adding
a bit of starter to a "standard" hot-water soaker. I'll try to keep notes this time!

Can anyone help me figure out the hydration of this loaf, based on the numbers above? I get all befuddled when there's a soaker involved.

I have two sets of baskets, both of about equal width; one is about 24cm long, which works quite nicely for loaves of about 700-750g of dough, and a pair of smaller ones that work well with about 500-550g. These loaves were in the neighborhood of 630g and could have been smooshed into the smaller baskets, but I decided to give them room to grow and used the longer ones. Would proofing in the shorter baskets have forced the bread to rise higher once it hit the oven?

Just realized: my starter is a year old this weekend! Thanks, Debra Wink!

We hadn't seen a bake from you in a while Carole. Thought you were taking a break etc. Not so! You've been just as busy.

Every bake a gem! And what lovely cupcakes.

Glad you've been enjoying an early "spring" and taking advantage of the good weather.

Unfortunately, "fool's spring" gave way to some nasty winds, preceded by a grey and soggy week. I had to take shelter between two parked cars this morning to not get swept away by a sudden, particularly violent gust; with my luck, I'd've landed in a rubbish heap on the outskirts of town!

Thanks for your kind words about the bakes, and for all your help and support over the past year ?.

Haha!  I really enjoyed your write-up for this post, your narrative suggests you must be an intrepid spirit blessed with a curiousity and energy to experiment and try things that intrigue you, catch your attention!  Eating the walnuts intended for your cupcakes is a typical sort of thing around here too, anything tasty intended as an addition to the bread needs to be set aside  and secured.  All of your baking in this post looks delicious but this weekend's rice with soaker bread is particularly enticing - beautiful crust, tasty-looking crumb and the nigella seeds must add a nice background flavour.  Thanks for sharing your weekend bake experience, your post made me smile, looking forward to your next bake and whatever catches your attention!

of my undisciplined and short attention span ?! Thanks for the kind words. And a warning: I'll probably be back to pester you about the fermented soaker. I'm psyched, can't wait to play!

and relaxing read after a day of trepsing through London and sitting down with sore feet! WoW so many great bakes and all have that lacy, lovely crumb....It has never occurred to me to consider any form of rice and you do this with amazing effect!!

I also often bake often with a younger starter which I make first thing in the morning then get on with life  and then it is ready for mixing etc. when I come back! Kat

Have you looked at your latest bake? I'm miles away from that yet!

Can't take credit for the rice -- that's totally Ian, and probably Elsie, too, now that I think about it.

Did you see some good art?

living, especially with birds, must really appeal to your baking instincts!  The turmeric really made an impact on that crumb for sure and the cupcakes would be gone in an instant around here.  ..  I used to think that Lucy and I were the only ones who ate the add ins that never made it into the bake:-)  Last week it was the raw almonds that I had originally bought to make 3 dozen almond cookies.  Well somehow, half of the almonds were eaten and this time it wasn't Lucy's entire fault although she had a few of them .  So instead of 36 I got less than half that amount o cookies made.  The recipe that I cut in half didn't have any leaven of any kind in it which I thought was weird so I put some SD in the mix and let it sit for an a couple of hour or so before mixing them up.  I love the SD salted rye cookies published on TFL a few years ago and these are pretty good too.  So now Lucy decided to do a different nut cookie every week.  This week she bought pistachios but we already ate half of them so we will be making a half batch.at most  Lucy says she has no idea where the walnuts we bought last week went too but they never made it into anything either. 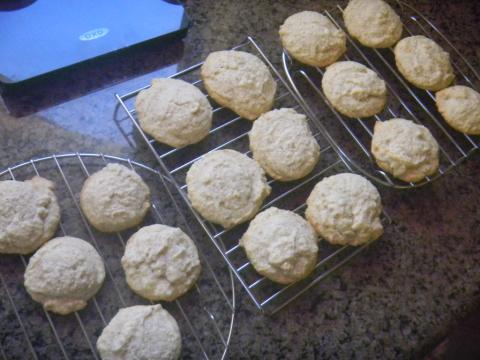 That loaf was given to my associate who always very kindly sends at least one lovely crumb shot. She puts up with my new obsession every day, poor thing!

Yep, half of the cashews that I toasted for tonight's curry never made it to the table ?. And I never buy pistachios for that very reason. The last time I made dukka I bought three times what I needed and just barely had enough for the finished product!

I don't know the salted rye cookies, but will have a look. Your almond cookies look yum, have you tried the ones that skibum posted a couple of weeks ago?

PS, since you seem to be a volumetric thinker, would you have any thoughts on my basket question above?

So glad I could inspire you.   I'm happy you enjoy the rice addition and it does help keep the loaf fresher longer.  I would be glad to help you figure out the hydration but I must have missed the ingredient amounts.  Feel free to PM me and I will help you out.